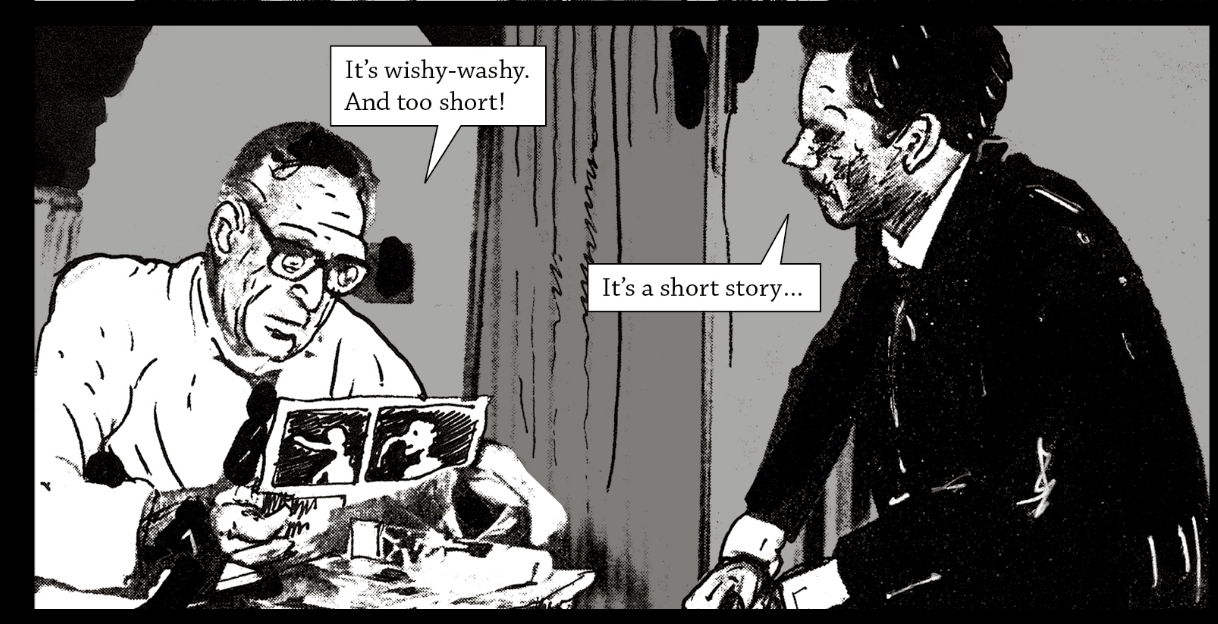 Said the Publisher to the Writer: ‘Rewrite Kafka, But Better.’

Scenes from Schlechtfreund, A Graphic Story by Dzian Baban and Vojtech Masek

via Words Without Borders
By Literary Hub 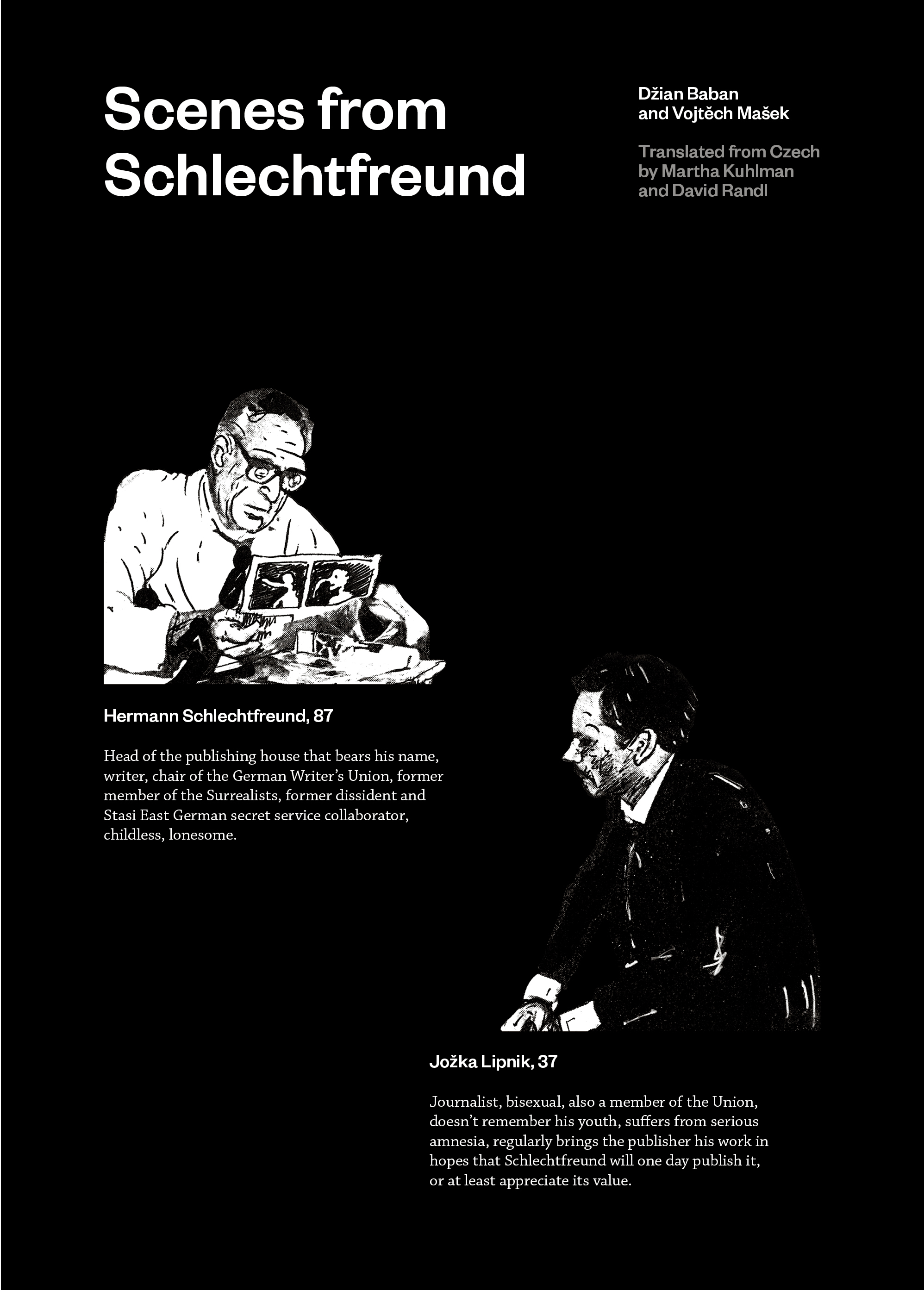 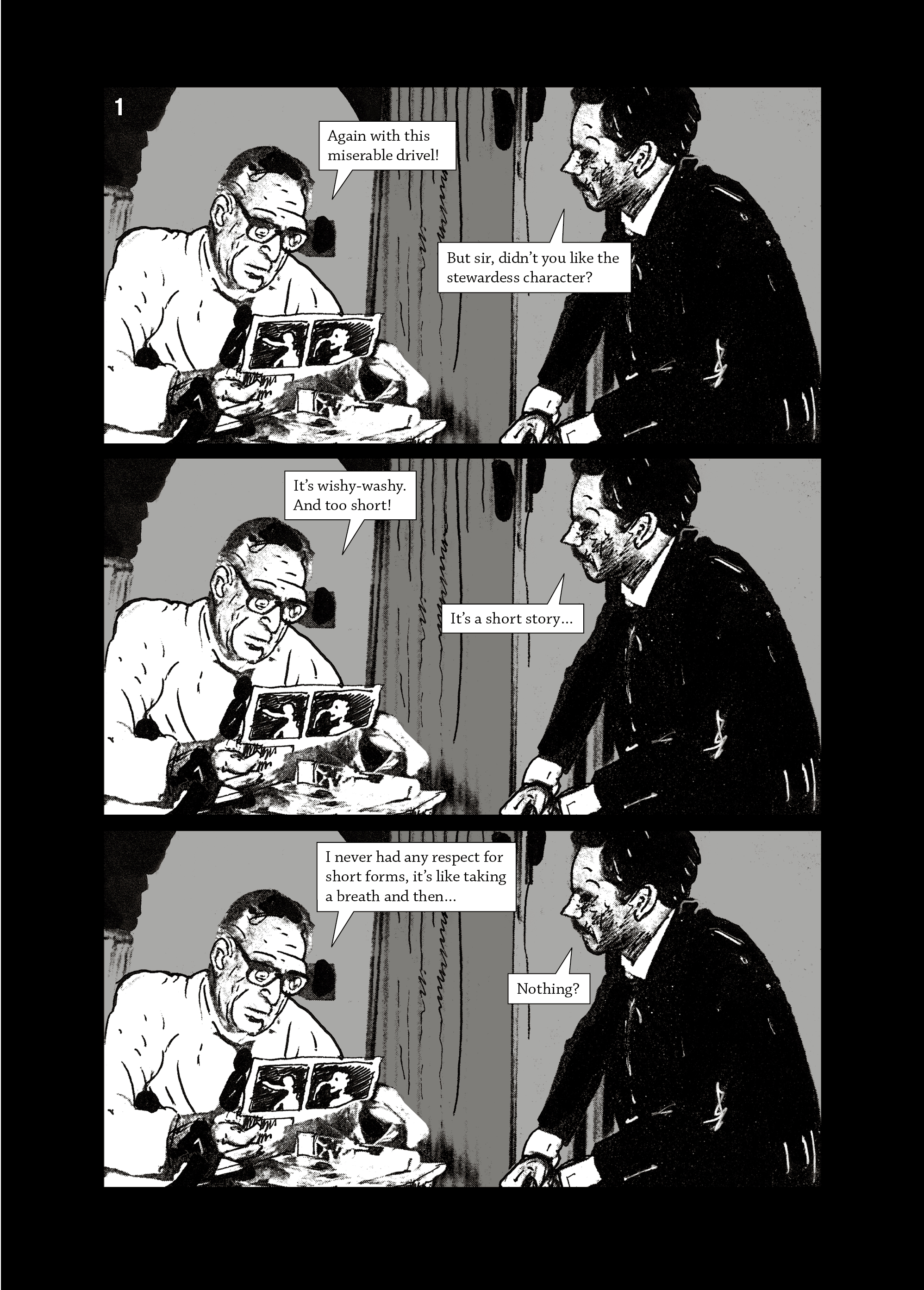 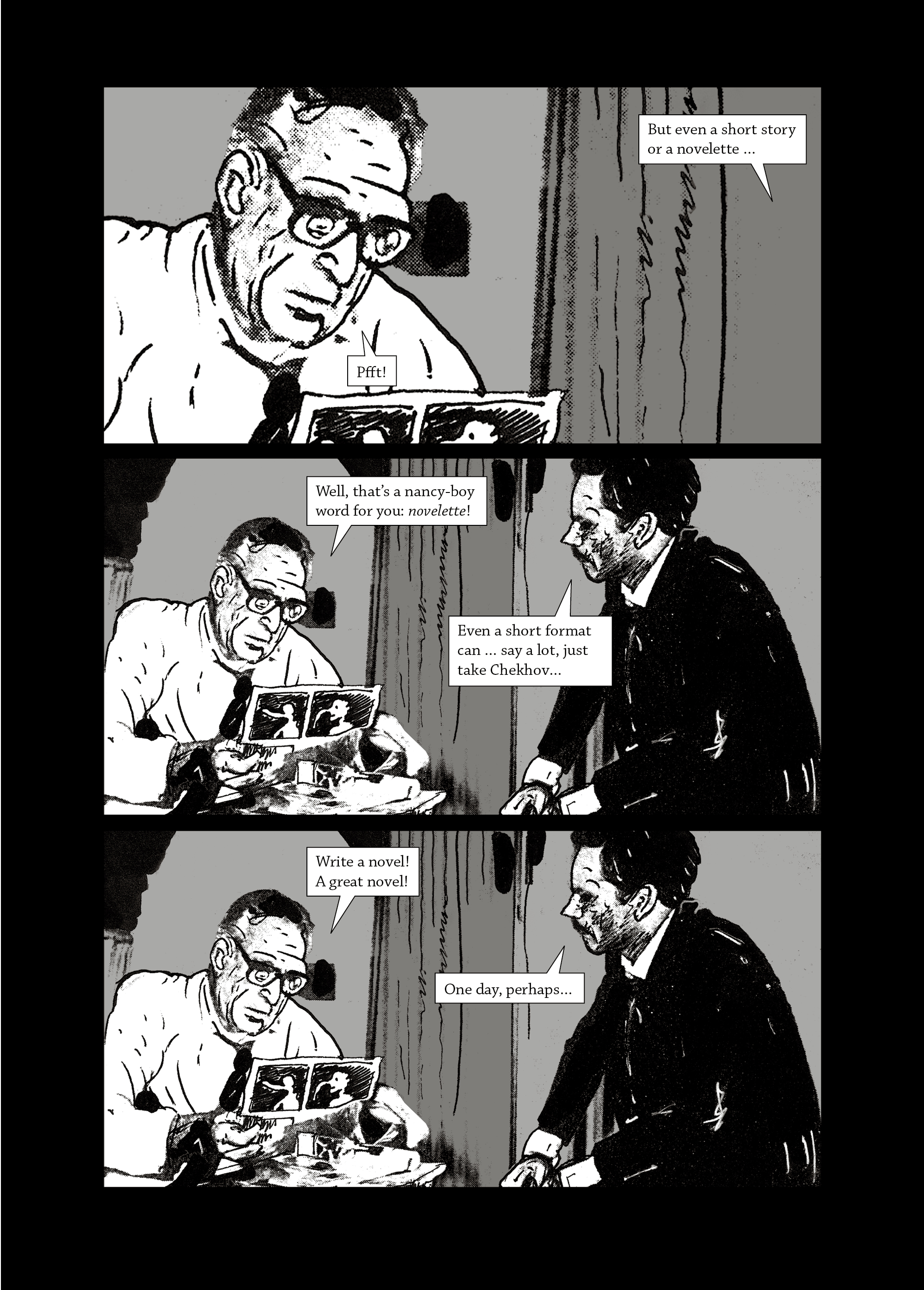 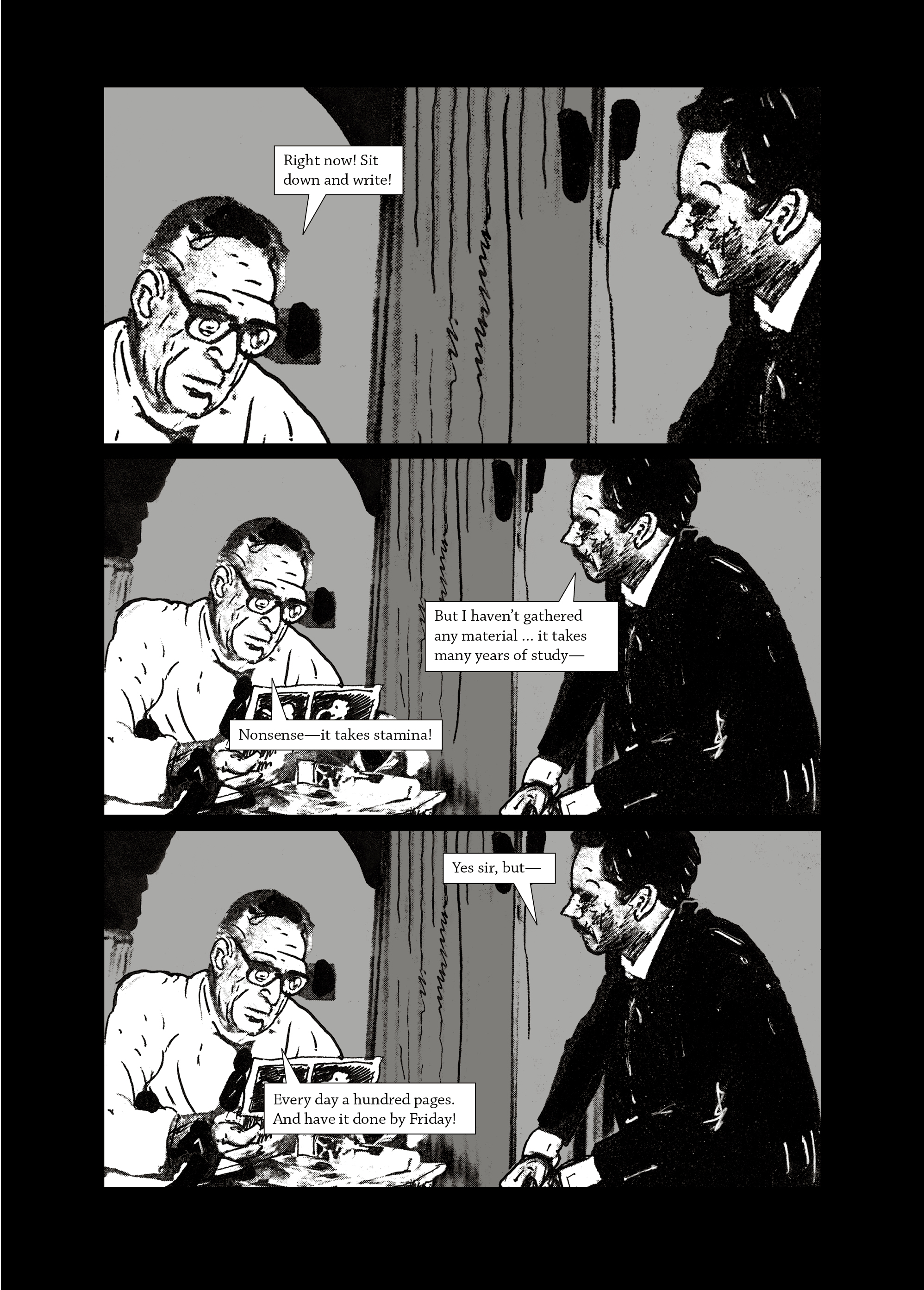 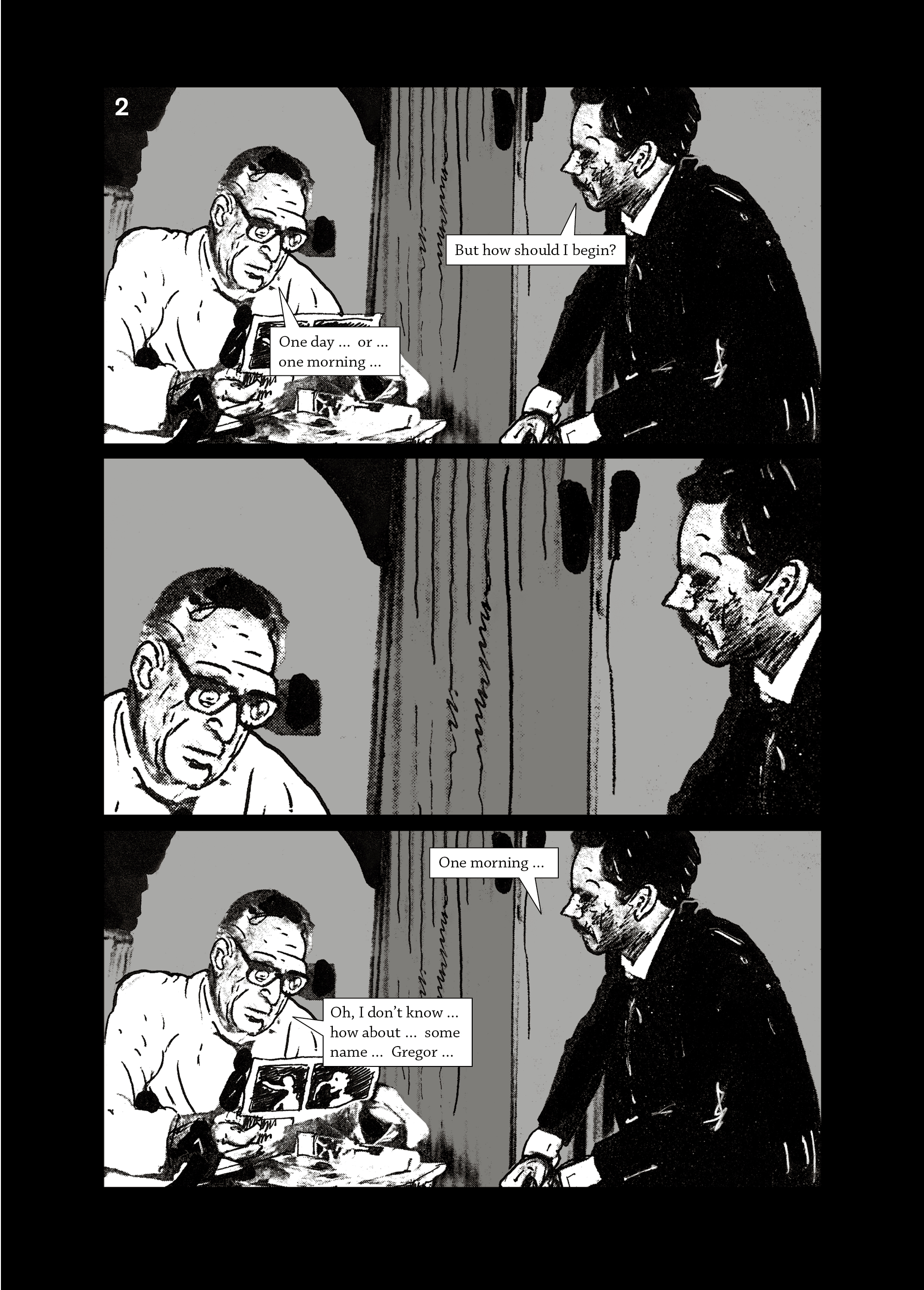 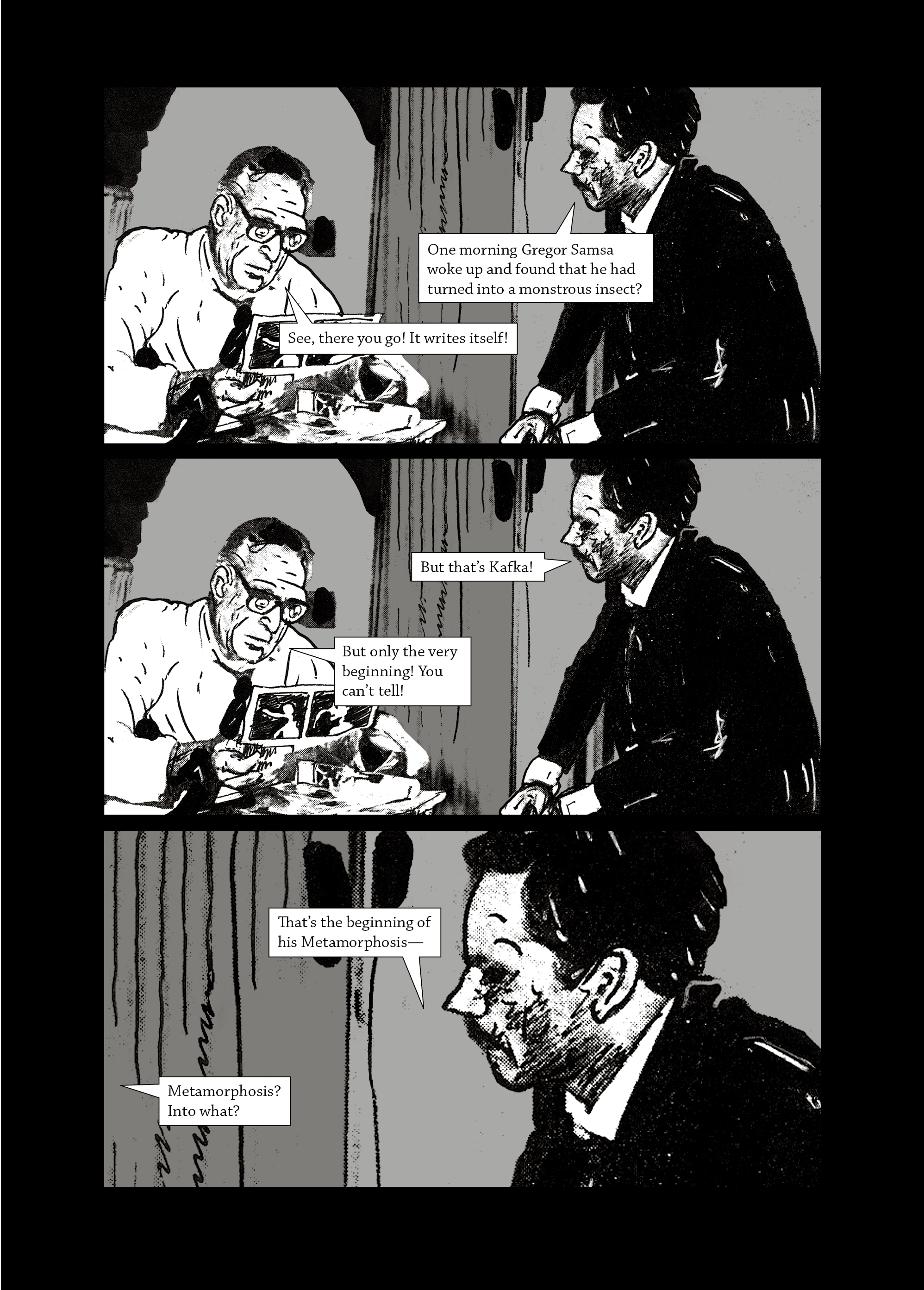 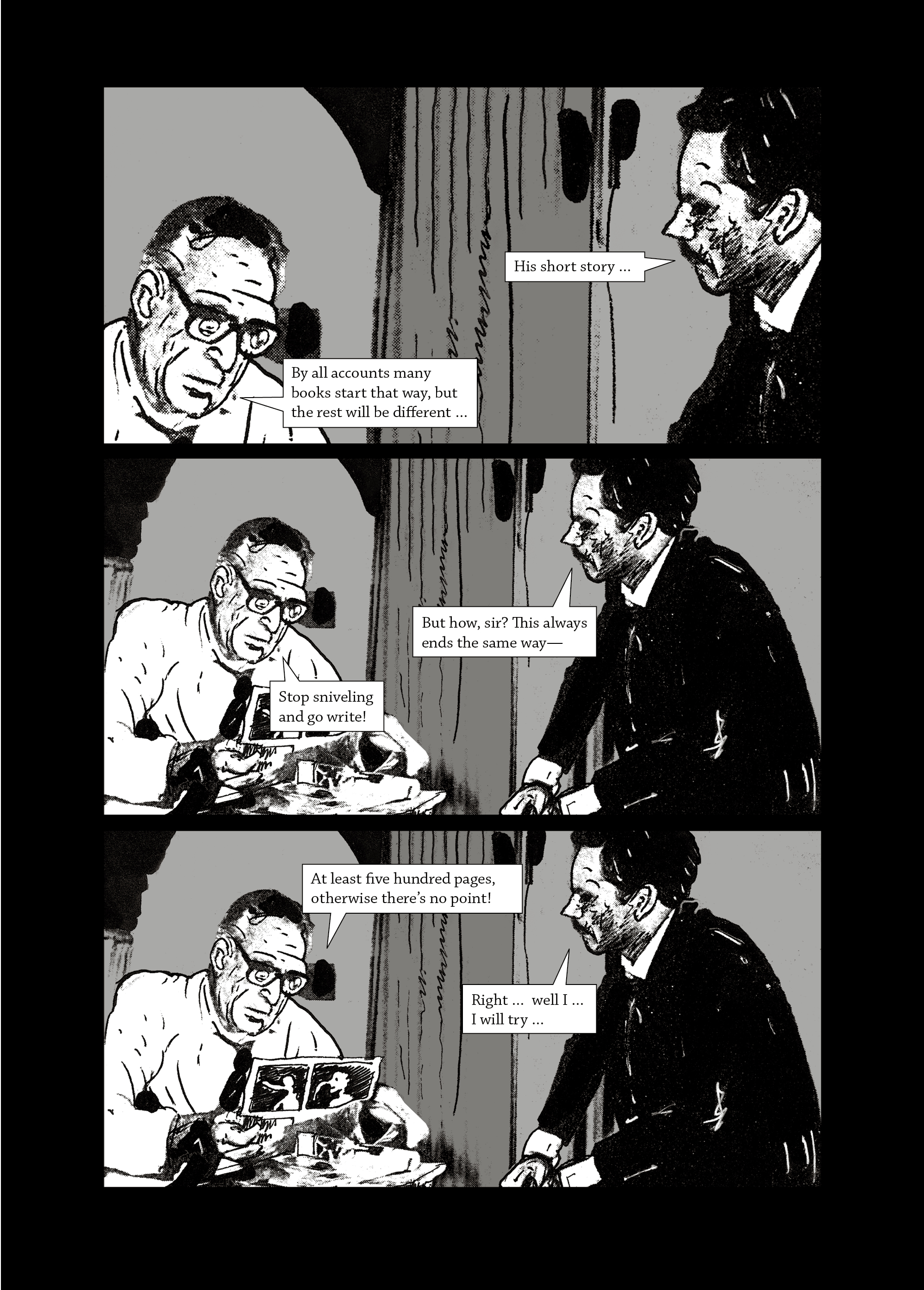 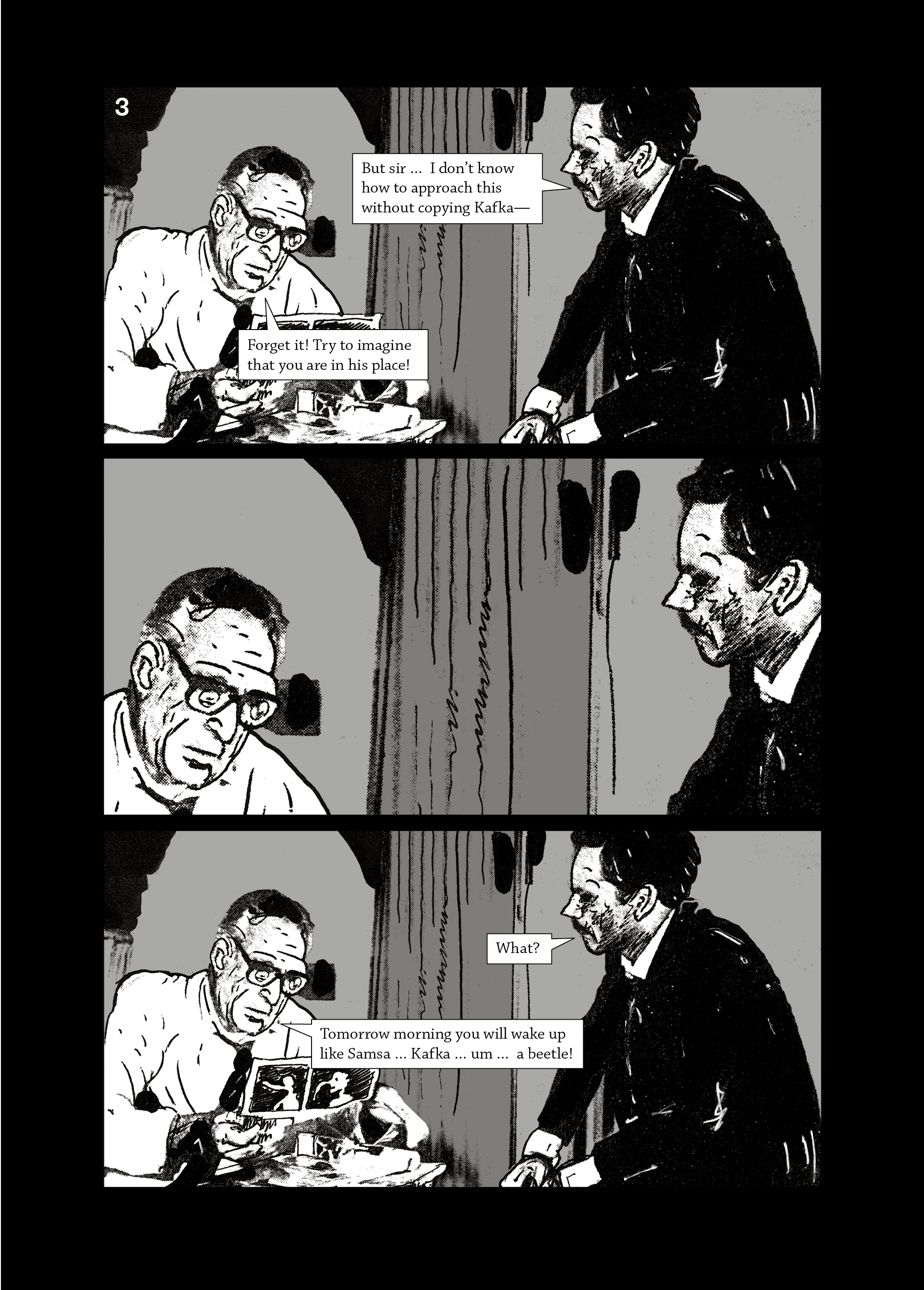 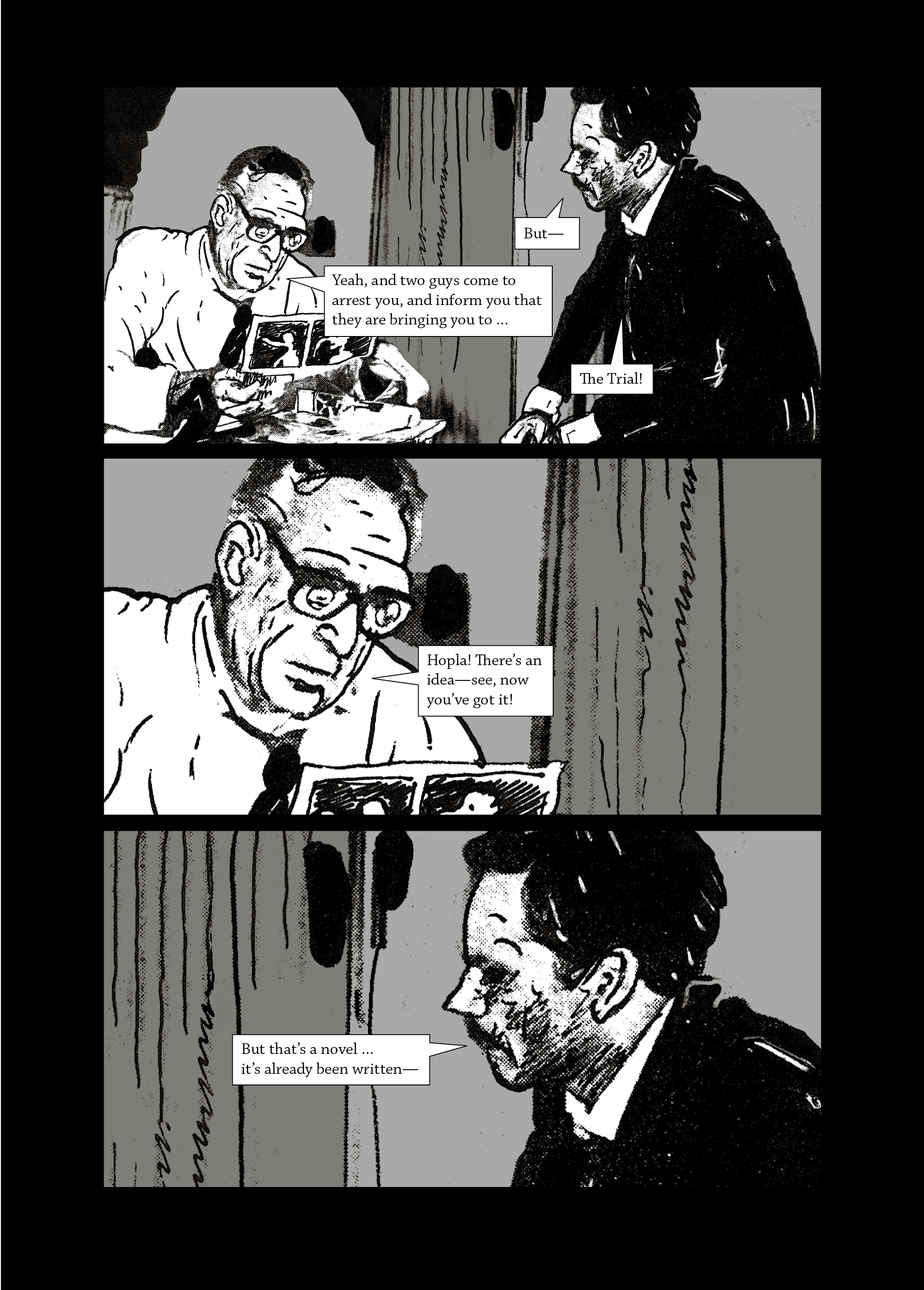 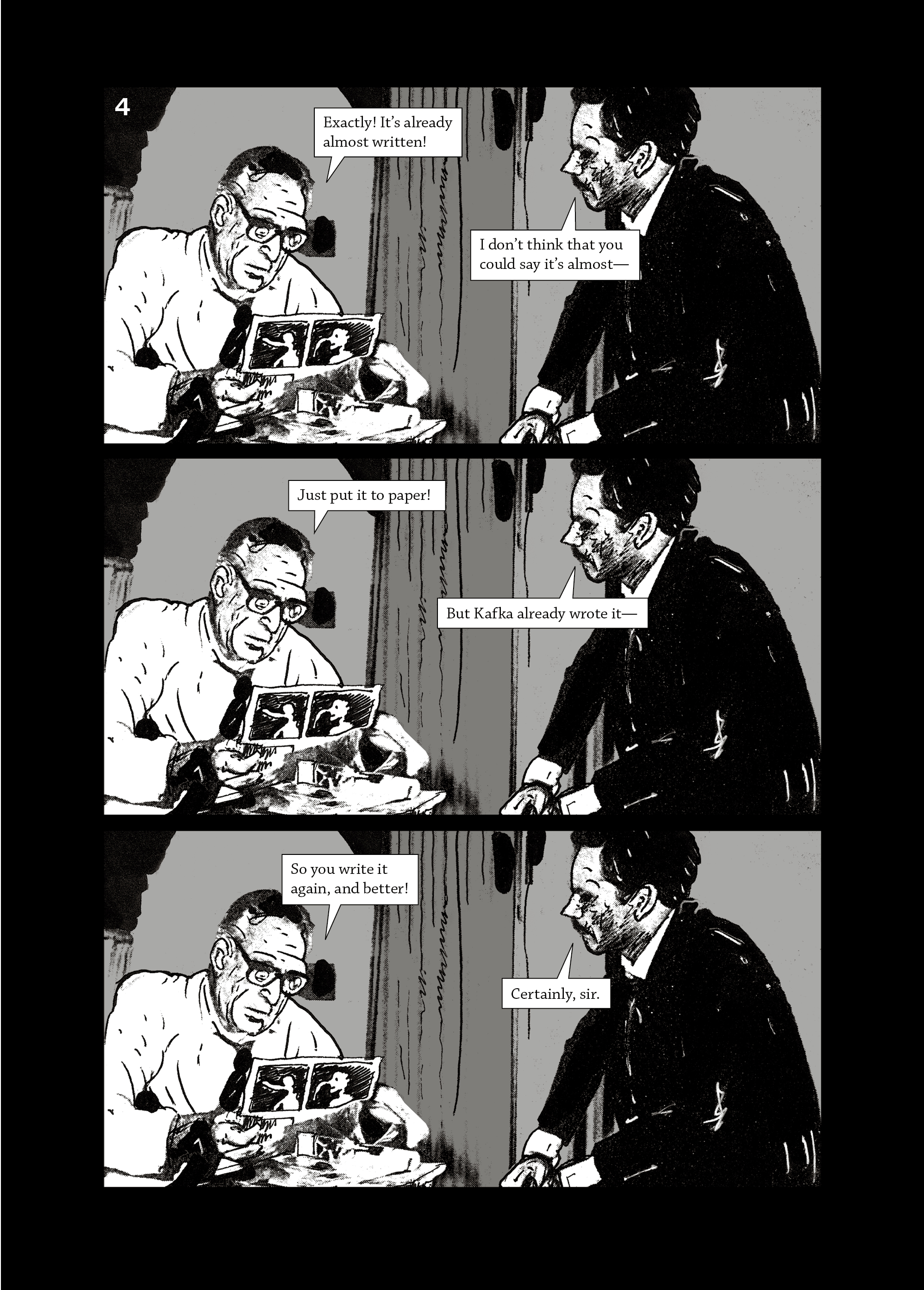 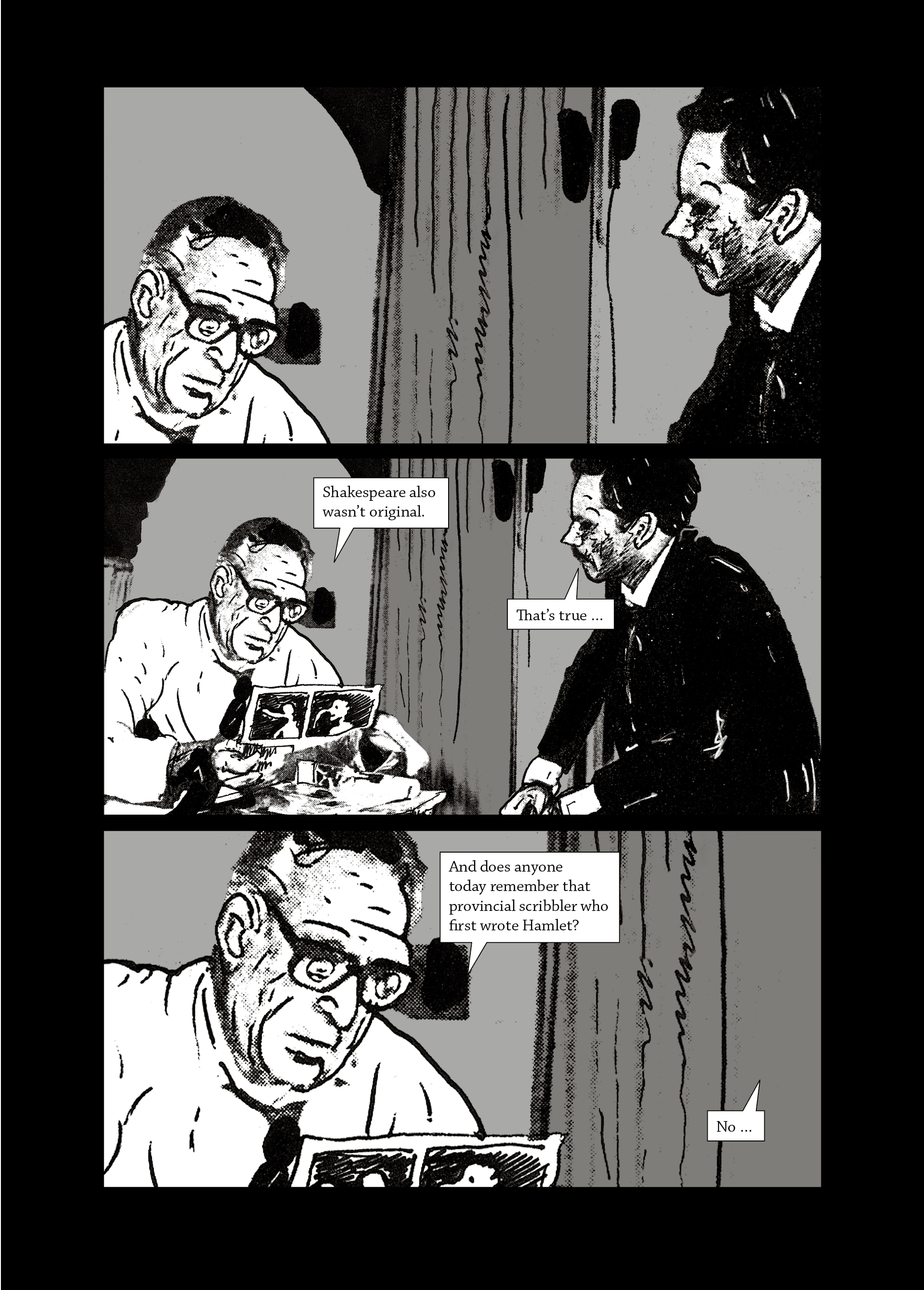 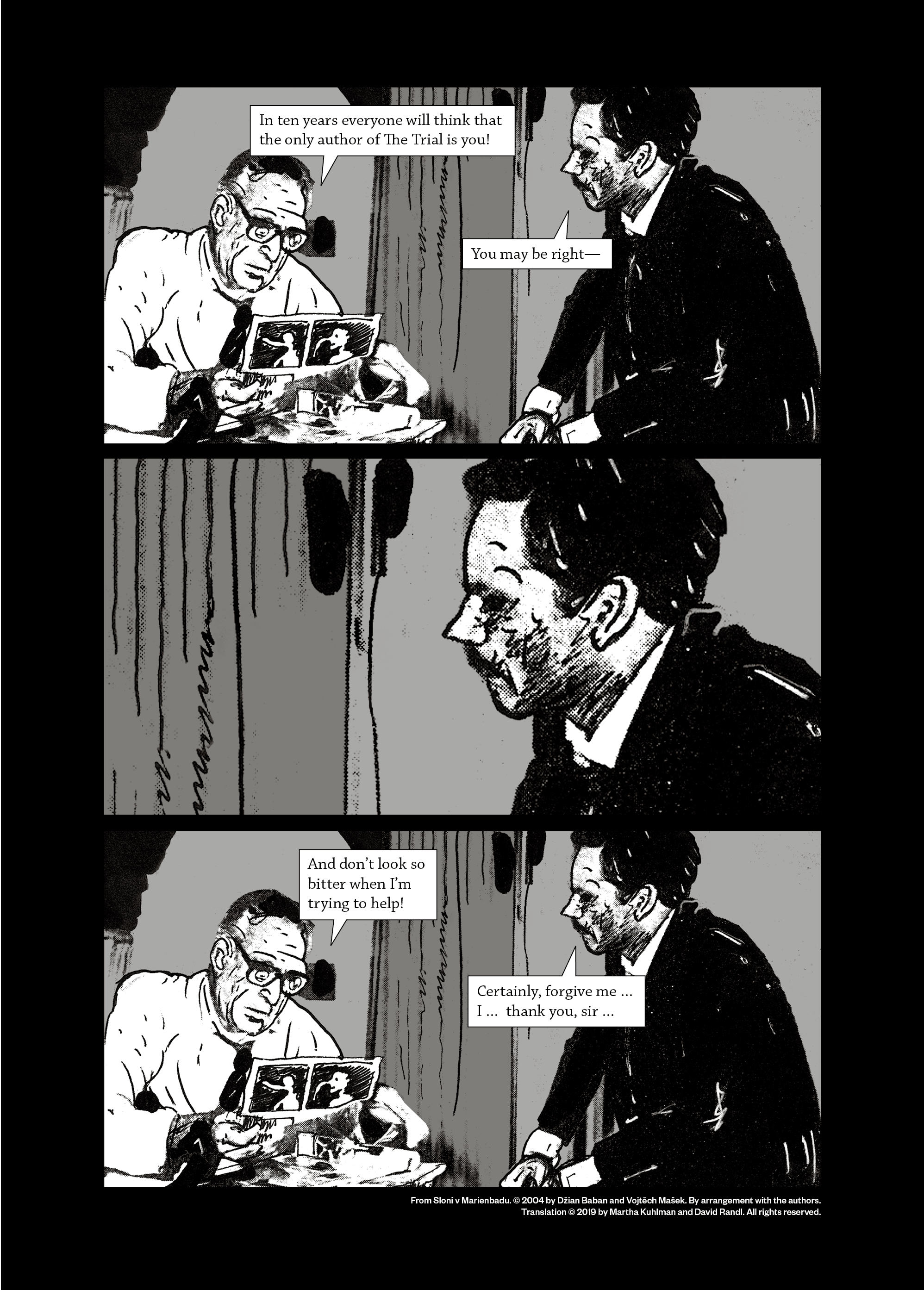 Translated from the Czech by Martha Kuhlman and David Randl

Used with permission of Words Without Borders. Copyright © 2019 by Martha Kuhlman and David Randl.

Vojěch Mašek is the author and illustrator of a dozen graphic novels, including Elephants in Marienbad, Look for Doc, Woman in Everything, Pandemonium, St. Barbora, Sisters Dietl, The Dragon Never Sleeps, and more. Most of these were awarded the Muriel Prize of the Czech comic festival KomiksFEST! for best story or best graphic novel. He has also written many screenplays: the feature film Tomík (1999); the short Fricassé (2003), which was selected as Quinzaine des réalisateurs in the International Film Festival in Cannes; the short I’m Bigger and Stronger (2007), co-written with Džian Baban and nominated for a Student Academy Award; and Little Crusader (2017), co-written with Jiří Soukup and awarded a Crystal Globe for the best feature film in the 52nd International Film Festival in Karlovy Vary. He is also the author of three plays: Off Record (co-written with Ivana Uhlířová), Black Honey and Fred Brunold’s Monster Cabaret (co-written with Džian Baban), and a theater comedy series, Jožkalipnikjebožíčlověkaneumílhát! (co-written with Džian Baban).

Džian Baban is a writer and musician. Most of his work was co-written with Vojtěch Mašek, including the graphic novels Elephants in Marienbad, Look for Doc, Woman in Everything, The Dragon Never Sleeps, and In the Shadow of Bohemian Forest. Between 2004 and 2015 their graphic novels, comic strips, and short stories were awarded multiple Muriel Prizes for best Czech comics story or best Czech comics book, and Baban and Mašek represented Czech comics authors at the 2015 Bucheon International Comics Festival in South Korea. Apart from writing graphic novels and theater comedy series, Baban also wrote screenplays for several short films, and in 2007, his work I´m Bigger and Stronger, co-written with Mašek and directed by Martin Duda, was nominated for a Student Academy Award. Baban also collaborated on experimental films with the respected Czech visual artist and film director Adela Babanova, Baban´s sister. Their films have been screened at different international exhibitions and festivals, and in 2018 they premiered their medium-length feature film Operation Neptune.

Martha Kuhlman is professor of comparative Literature in the Department of English and Cultural Studies at Bryant University, where she teaches courses on the graphic novel, Central European literature, and critical theory. With Dave Ball she coedited The Comics of Chris Ware: Drawing is a Way of Thinking (2010). In addition, she has published articles on comics in the Journal of Popular Culture, European Comic Art, and the International Journal of Comic Art, and contributed chapters to  The Cambridge History of the Graphic Novel, The Cambridge Guide to the Graphic Novel, and the MLA volume Approaches to Teaching the Graphic Narrative, among other works. Currently she is collaborating with José Alaniz (U on an edited volume titled Comics of the New Europe. Her artwork Kafka Komix is on display through March 1, 2019, as part of the group exhibit “Playing by the Rules” at the Salzay Art Gallery, Ohio Northern University, Ada, Ohio.

David Randl started working on literary translation projects to further his skills after four years of experience with business translation. He is concluding his undergraduate studies in German and business at Brown University in May 2019. David knows Czech, Russian, English, and German, and is interested in the literature and legacy of the German diaspora in Bohemia. 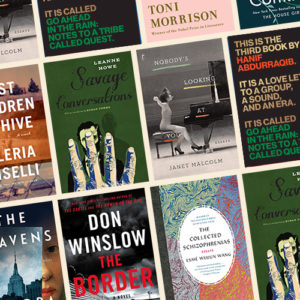 13 Books You Should Read This February Sophia Shalmiyev, Mother Winter (Simon & Schuster) Any book that came with glowing blurbs by Eileen Myles, Chris Kraus,...
© LitHub
Back to top
Loading Comments...