Rumors of the ‘Gay Gene’ Have Been Greatly Exaggerated

On Richard Dawkins and the Dangers of Reductive Science

Because Homo sapiens is in essence a storytelling species, it is understandable that even scientists sometimes yield to the siren call of reductionism. But we can’t ignore the fact that, when behavioral scientists yield in this way, they trap themselves in oversimplified narratives both about how our species got to be the way it is, and about how it behaves now.

This tendency to oversimplify is particularly problematic in evolutionary biology, because simplistic explanations have proven especially well-adapted to genetic (and more recently genomic) reasoning. A good case in point is the notion that such rarefied qualities as our ethical and political behaviors are quantifiable traits that, thanks to our newfound ability to trawl the human genome, we can examine for their underlying genetic or neurobiological bases. The idea here is that if we can find the genes that specify these behaviors, we will know how the traits are produced. And if we know how they are produced, we will also be able to explain why we have them.

As members of a (sometimes) introspective species, we cannot readily pass up any opportunity to improve our self-knowledge; and our new technological tools do indeed open up exciting potential prospects for understanding the mechanisms that underpin who we are. But in any area as sensitive as our human behaviors—and our ethical behaviors in particular—we can hardly ignore the obvious pitfalls if we get our explanations wrong. And that, of course, means that we can’t start jumping to conclusions without first rigorously examining the assumptions on which those conclusions are based—a caveat that has to be at the fore whenever we try to make associations between genes and behaviors.

Perhaps the most familiar, and certainly the most compelling, of the reductive approaches to human behavior is the one often known as evolutionary psychology. This crossover discipline is based, among other things, on the premise that behavioral traits are “atomizable,” meaning that they can be studied as independent entities. This is a necessary premise because associations between cause and effect can be made only when the effects (specific behaviors) have been isolated. Only then can the genes be lauded or blamed for those human behaviors, which can then in turn be explained in terms of inheritance from earlier ancestors. By following this path, some scientists have—usually controversially—decided that the genetic bases for sexual preference, religiousness, ethical behavior, intelligence, and many other very complex behaviors do not simply involve responses by our very complex brains to immediate stimuli, but are instead expressions of ancestral tendencies.

The great tragedy of science is a beautiful theory slain by an ugly fact.

Evolutionary psychology is among those domains of evolutionary research that have sidestepped the need for specifically mapping traits in a genetic context, concluding that it is enough simply to know that our behavioral repertoire has a genetic component. And it is also a good example of why we need to be careful when we interpret human behavioral traits in evolutionary terms.

The discipline sprang out of the sociobiology craze that began in the 1970s when E.O. Wilson, an expert in social insects, published his text

Sociobiology. The premise of this volume was that behaviors are inherited, and thus can be studied like physical traits. Since the social dynamics of insects are hugely different from those among primates, it was hardly surprising that sociobiological explanations for human traits—especially behavioral ones—were widely disputed and controversial from the beginning.

Still, Wilson’s approach to understanding human behavior and evolution soon morphed quietly into evolutionary psychology, and it has gained momentum in this guise ever since, despite its many conceptual problems. A major reason for this success is that evolutionary psychology is a supremely reductionist approach to explaining humans’ often bizarre behaviors, and the human mind—that storyteller’s mind which loves to make simple connections—seems naturally drawn to reductionist explanations.

One premise of modern genetics is that if we understand the genome, we will ultimately understand the biology of everything around us. But while the genomes of organisms do indeed carry the basic information necessary for the construction of every living thing, the promise that we will find the exact genetic bases of our many complex traits has rarely been kept. Instead, we are usually left with a rather incomplete—albeit tantalizing—picture of how things

might work in generating the trait we are interested in. And how something might work is simply a hypothesis. Science requires that hypotheses be tested—indeed, it is the ability to be tested that makes a hypothesis scientific.

But there is a big difference between proposing a hypothesis and actually testing it. In the real world it remains true that, as the comparative anatomist and evolutionist Thomas Henry Huxley remarked a century and a half ago, the great tragedy of science is a beautiful theory slain by an ugly fact. Everybody loves beauty, but few of us want to participate in a tragedy; and in consequence it is often tempting for researchers to jump the gun, and to reach conclusions on the basis of beautiful hypotheses that have not been rigorously tested, or perhaps not tested at all. One of our colleagues, who shall go unnamed, once said: “Never let data get in the way of a beautiful hypothesis.” While our friendships are still intact, we have to point out that data are what science is all about.

What are “Genes For”?

If you have recently opened a newspaper, fired up your computer, or turned on your television, it’s a pretty good bet that you’ve encountered a report of a gene being discovered “for” this trait or that. But as attractive as they might be to journalists, such revelations are usually optimistic at best; and they are most often downright misleading. To substantiate this claim, we might do worse than to offer in evidence Richard Dawkins, the famous atheist and evolutionary biologist, who recently made a splash by discussing the evolutionary dynamics of homosexuality online. He repeatedly referred to “the gay gene” and to the “gene for homosexuality” which, by his account, persisted in human populations for a whole slew of reasons.

Some people (and some giraffes, for that matter) are homosexual. But what did Dawkins mean by the “gene for”? Well, his ability to visualize a “gene for X” (in this case, homosexuality) comes from his strong belief that it is the gene that is the unit of evolution, a notion that he cleverly, if unpersuasively, advocated in his now four-decades-old bestseller The Selfish Gene. Dawkins defined the gene for X in a binary context, in which individuals either have the gene or don’t.

In Dawkins’s view, a gene for X is any bit of DNA, however small, whose possessors have a higher probability of expressing X in their phenotype than individuals without the snippet of DNA do. But this actually gets us nowhere, because this definition is so broad as to be meaningless. That’s because it would include not only any gene with a major phenotypic effect—sickle-cell disease, say—but also any gene that had even the most trivial of effects. Yet, clearly, only those genes that exert a major effect on the phenotype come even close to being satisfactory candidate “genes for X.”

Some people (and some giraffes, for that matter) are homosexual.

And in the real world there turns out to be only a handful of genes of this kind, most of them behaving in a Mendelian fashion—although it’s important to remember that, while by definition all Mendelian genes are also major-effect genes, not all major-effect genes are Mendelian. More importantly, though, most genes are pleiotropic—that is, they influence more than one trait—while most character spectra are polygenic, meaning that they are influenced by many genes. Seeking one-to-one correspondences between protein-coding genes and specific phenotypic characteristics is thus for the most part a fool’s errand.

Understanding precisely how genotypes specify phenotypes, and how they influence such phenomena as speciation, have long been twin Holy Grails in evolutionary biology. The discoveries of such phenomena as the rules of inheritance, the linearity of genes on chromosomes, the process of mutation, the fact that DNA is the hereditary element, and genome sequencing were all big steps along the long road toward finding them.

But, just like pinpointing the mythic vessel from the Last Supper, identifying and validating the exact genomic bases of phenotypes and speciation have in most cases proven extremely problematic, despite all advances. This is because, to repeat, the vast majority of phenotypes, both physical and behavioral, are determined in a complex polygenic manner, so that while a handful of traits (the simple ones) can meet the causality criterion, the vast majority almost certainly can neither be broken down into discrete units, nor be attributed to discrete causes.

One way to describe the genetic, genomic, and developmental complexities of many traits is to look at their genetic architectures. The term architecture accurately reflects this issue of complexity, because buildings can neatly be broken down into their architectural characteristics. Major categories might include roof, building materials, doors, windows, chimney, and so forth. Each of these categories will exist in a series of variants, and by summing up the variants desired, the architect can easily characterize the makeup, or the architectural character, of a particular design. The next step is then to encode the overall character of the house in a blueprint, so the builder can construct the house as desired.

The blueprint is the first step in allowing the builder to understand the architecture of a house, and this is where the analogy with complex phenotypes comes in. Trudy F.C. Mackay, a geneticist who studies genes and traits in

Drosophila fruit flies, has remarked that “understanding the genetic architecture of quantitative traits begins with identifying the genes regulating these traits.”

But while the endeavor she describes might seem straightforward, in painful reality understanding the relationship between most traits and phenotypes is one of the more difficult goals in modern biology, certainly in the majority of cases in which the trait under consideration is complex. Still, this has hardly deterred speculation. The usual approach has first involved figuring out just where in the lengthy genome the genetically varying trait is controlled. The resulting genome-level information can then, in theory, be used to work out exactly which alleles are involved. But simple as this procedure may sound, it has often involved pulling off some remarkable technological feats; and even then, it is no sure thing.

Ian Tattersall is Curator Emeritus in the Division of Anthropology of the American Museum of Natural History in New York. The author of many books, including the widely praised Masters of the Planet, he is often interviewed about human evolution in the media and speaks around the world. He is the winner of numerous awards, and lives in Greenwich Village.

Rob DeSalle is a curator in the Sackler Institute for Comparative Genomics and professor at the Richard Gilder Graduate School at the American Museum of Natural History. He is the author of The Science of Jurassic Park and the Lost World (with David Lindley, 1997) and the coauthor of Welcome to the Microbiome: Getting to Know the Trillions of Bacteria and Other Microbes In, On, and Around You (2015), among others. 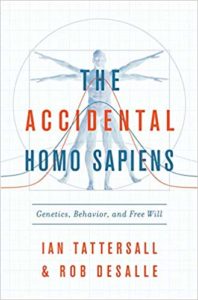 Excerpted from The Accidental Homo Sapiens: Genetics, Behavior, and Free Will. Used with permission of Pegasus Books. Copyright 2019 by Ian Tattersall and Rob DeSalle.

LaTanya McQueen on Imagining Her Audience and Life on Twitter 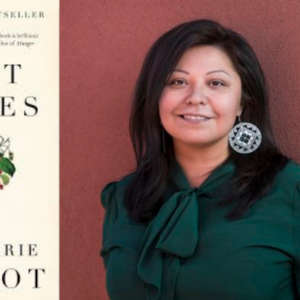