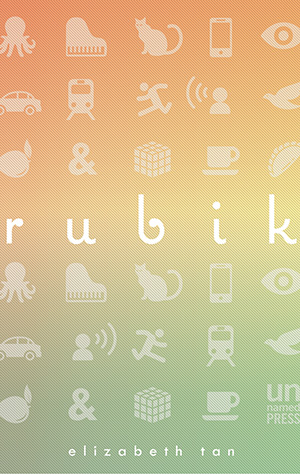 The following is from Elizabeth Tan's debut collection, Rubik. These interconnected stories follow Elena Rubik and the online presence she leaves behind after dying in a car accident. Elizabeth Tan's writing has previously appeared in Westerly, The Lifted Brow, and elsewhere.

It’s Sunday evening and there’s nothing to eat. Elena’s bladeless fan pivots in monochrome silence, the centerpiece of a room that’s untidy in an engineered way, like movie teenage bedrooms. There’s the strewn unwashed clothes and wall-to-ceiling magazine-torn posters of brooding twenty-something heartthrobs. Cinematic untidiness. Elena, twenty-five, waking up to the awkwardly looped music of a DVD menu screen, remembering the food problem, flicking her mouse to find the Start bar for the time. Thirty minutes too late for Fresh Direct, ninety for IGA.

There’s McDonald’s, but she doesn’t like the constant chime of the drive-in or the white lights. The atmosphere in McDonald’s is deliberately uncomfortable, she’s been told. The better to encourage customers to move on so the restaurant can admit new ones.

She spies a rip in one of her brooding twenty-somethings. Smoothes it with a fingernail. Real? No, fake. It was a gift actually, this ironic teenage-bedroom wallpaper—purchased by Jules two years ago from Owls in the Navy. The heartthrobs come complete with faux celebrity names, part-rogue, part-boy-next-door: Brad Ruffalo, Justin Lee Thomas.

There should be neighborhood vending machines, Elena decides, tugging her blackened shoelaces. Like laundromats. Fluorescent coves of machine-lined walls, a bench with magazines to ick through while you wait for your Cup-O-Noodles to boil. An idea that someone in some distant city has surely conceived, patented, and deemed unviable by now.

Elena, out into the crisply illuminated street, through her buttoned-up neighborhood. Distant traffic is sonorous like an ocean wave that never arrives. Fifteen minutes away on the main road there are two petrol stations adjacent to each other, locked, by virtue of their location, into advertising identical gas prices every day. This proximity has also inspired a convenience arms race: the stations’ modest cash register chewing gum selections have expanded, over the years, into glimmering emergency snack food emporia.

Ten minutes down the slope of Camberwell Street and Jules’s car passes by, on her way to the house. Elena lifts a hand, too late. They have these moments often. Since moving out from under her parents’ roof, Elena has discovered that having roommates is lonelier than she initially thought. You only ever seem to glimpse your housemates while they’re on their way to somewhere else, everyone moving in their own private orbit. Their presence is rarely felt outside of a plate in the sink, a DVD left in the player, rent money squashed in a re-used envelope.

“Over the course of Monday afternoon, 157 people assess their relationship to Elena Rubik, reframe the significance of their last conversation with her, express their grief in 420 characters or less.”

On this night she selects the Gull station. Drawn immediately to the heat-lamped food display, the desperate huddle of pastries. She selects a Homestyle Country Pie, declines the tomato sauce, and separates a ten dollar bill from her tight jeans pocket. She contemplates her change, but none of the neon drinks in the fridge appeals to her tonight. She tears open the packaging to her pie. It does not taste of any country she knows.

Elena, on the diagonal, outside and away from the white glow of diesel and LPG, the faint croon of the radio playing infinitely for refuelling motorists.

The car that hits her is a 1991 Ford EA Falcon, making a right turn as simply as a child rotates a toy ninety degrees. The bonnet whips like a swordfish. When it knocks into Elena the pie ejects from her hand, becomes airborne, and in her last moments she marvels at the literalness of it. A pie in the sky.

One hundred and fifty-seven of Elena’s 212 friends find out when some of the remaining fifty-five leave condolence messages on Elena’s profile. Over the course of Monday afternoon, 157 people assess their relationship to Elena Rubik, reframe the significance of their last conversation with her, express their grief in 420 characters or less. They stare at her profile picture and try to imagine her as somebody no longer alive.

For each new post on Elena’s profile, unread notifications accumulate in her inbox. Among these emails are weekly newsletters from Owls in the Navy, of which Elena is now one of six deceased subscribers.

Elena’s DELL Vostro becomes the property of Mr. and Mrs. Rubik, who cannot access it without her user password. The DVD that Elena watched on the night of her death is still inside it, and has since accrued a late fee of $82.50. The laptop will remain inside a box in the Rubik family study.

Some time in the year that follows, Jules accidentally scrolls too far down her list of phone contacts and sends a text to Elena Rubik instead of Edward Lee. She is about to send an apology when she realizes. She wonders if she ought to delete Elena’s contact details. She thinks of Elena, out on Camberwell Street, whitened by her headlights. She imagines her mistaken text message vibrating in the pocket of Elena’s ghost, outside that gas station, where somebody—she doesn’t know who—still leaves flowers.

On 15 July 2011, Elena’s online age ticks over from twenty-five to twenty-six. This is when one of Elena’s friends clicks on her profile to wish her a happy birthday, discovers the thick backlog of messages, and commences her mourning two months behind everybody else.

On the Luxury Replicants fan fiction forum, Rubik3 appears at the bottom of the front page under Today’s Birthdays. Renzo notices it, and PMs Elena:

Hey Rubik, happy birthday! Haven’t seen you around for a while. How’s the next chapter of EotG coming along? Do you need a beta reader? Renzo.

Three years later, another member of LR will lose his battle with cancer, spawning a tribute thread and tentative plans to contact the member’s family with donations. Renzo will think about this incident with Rubik3, his unanswered PM. He will feel the moment like a tongue probing a gap in a line of teeth. A distant truth that never arrives.

Just when the residents of 14 Camberwell Street resign themselves to moving back in with their parents, Jules finally manages to find a fifth housemate, one Bernard Cash, who shifts into Elena’s old spot after it has been cleared of everything except for her wallpaper. Bernard will reconfigure the room—place the bed by the wardrobe and the desk by the window. He will plug his power board into the wall socket and attach his phone charger, his lamp, his fan, his Macbook. He will think of Elena, of her ex-housemates turned brittle by some strange guilt that he discovers he understands completely. He will spend a moment in silence, sitting in his new room, but he won’t feel creeped out. He will ask Jules for the wireless password. He will check the time on the Desktop. He will Wiki ‘Brad Ruffalo’ to figure out what he’s been in.

From Rubik. Used with permission of Unnamed Press. Copyright © 2018 by Elizabeth Tan. 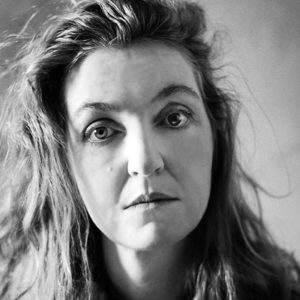 Rebecca Solnit on Skipping High School and California Culture In this episode of A Phone Call from Paul, Paul Holdengraber speaks with Rebecca Solnit about how subtly cultural shifts...
© LitHub
Back to top