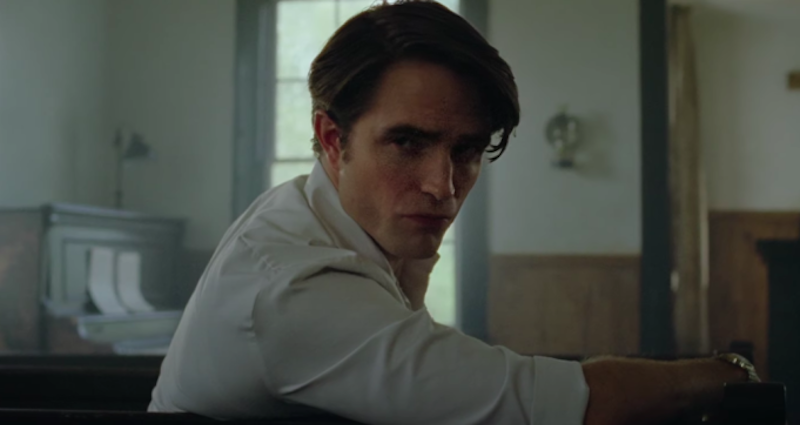 Robert Pattinson is a demonic preacher in the first trailer for The Devil All the Time.

There’s nothing I love more than a demonic preacher. Whether it’s murderous Robert Mitchum singing “Leaning on the Everlasting Arms” as he stalks children through the friscalating West Virginia dusklight in Night of the Hunter, or supernatural misogynist Nathan Fillion spouting quasi-biblical quotes as he picks off potential Slayers in Buffy, I just can’t get enough of those cassocked creeps and their fire n’ brimstone sermons.

It therefore brought me no small amount of joy to see heir to Johnny Depp’s 1990’s handsome weirdo crown Robert Pattinson pop up as a menacing man of the cloth in the first trailer for The Devil All the Time, the upcoming Netflix adaptation of Donald Ray Pollock’s 2011 “Hillbilly Gothic” debut novel. Though we only catch glimpses of Pattinson’s preacher, clad incongruously in a powder blue suit and ruffle shirt, he seems a far cry from the former teen heartthrob’s most iconic role: that of the joylessly masturbating, seagull-bludgeoning lighthouse keeper’s assistant Ephraim Winslow in Robert Eggers’ 2019 romantic comedy The Lighthouse.

Set in the marvelously named town of Knockemstiff, Ohio (which is not just a real place, but the real life home place of Pollock), and featuring an ensemble cast that includes Tom Holland, Bill Skarsgård, Riley Keough, Jason Clarke, Sebastian Stan, and Mia Wasikowska, The Devil All the Time “charts how a group of sinister characters converge around a young man as he fights evil forces that threaten him and his family.in post-World War II Southern Ohio and West Virginia.”

The film is scheduled to be released on September 16, so you have a little over a month to read the source material before Pattinson comes for your immortal soul.