Returning Home to the Ghosts of Budapest

Joseph Kertes Revisits the Scenes of a Childhood Escape

After I’d been away for nearly six decades, my wife Helen recently persuaded me to return to Budapest. My parents, who had no intention of looking back, hadn’t visited since we fled in 1956, during the revolution against the Russians. As I was a preschooler then, I have scant memories of those final days and hours. I distinctly remember, however, my horror at seeing Hungarian soldiers hanging from lampposts. One man in particular seemed to be looking straight at me, though his eyes were no longer taking in the light. He haunted my dreams for years afterward. I remember hundreds of us Hungarians fleeing by foot during the night, heading towards freedom in Austria as bombs went off around us. My older brother kept asking who was dropping them, although no one would answer; finally, our grandmother told us we’d just crossed a minefield.

So here we were again in the city of my birth. We were armed with the old addresses my parents had written up for me: our last house in Budapest, the hospital where I was born, the café my grandparents had frequented and another café my great-grandfather visited every day, the office building where my parents hid out for nearly a year during the war, the historic cemetery where generations of my family lay, the immense Victorian building my great-grandparents had owned—and which had been confiscated, along with many other family holdings: a brick works, a law office building, and an old cinema, where my grandmother’s first cousin, the legendary film producer Alexander Korda, first fell in love with the form.

One thing my parents hadn’t armed us with was a sense of the grandeur of the place, its glowing ambition, its exuberance, which even a half-century of Soviet occupation couldn’t suppress (though some of its noble structures were gray and in need of a good scrubbing). The river cruise commercials always culminate in the brilliant, domed federal parliament building, its cap and shoulders looming over the Danube. We sat having coffee and cake, smelling the air and looking across the Chain Bridge from Pest to Buda. I was picking up echoes of generations long gone. The dead, for me, felt more alive suddenly than the living. How many of my ancestors had sat here as we were doing, sipping espresso and munching on walnut strudel and wondering how long this could all last, this unabashed ambition, this prosperity and good feeling? Was it much like the feeling we have in the New World, where we rarely consider that it could all vanish one day?

We started with the sights, the Gothic parliament buildings being the first. Their construction began in 1895 to mark the 1,000th anniversary of the nation. I wanted to know everything and was surprised to find that people understood my elementary Hungarian—surprised that the words were still present in some forgotten childhood backroom.

We saw the National Museum up on the hill in Buda. We visited Memento Park, which now hosted Hungary’s communist relics, including the great bronze boots of Stalin—all that was left of the colossal statue of the Soviet leader that originally stood in Heroes’ Square. We took in The Marriage of Figaro in the neo-Renaissance opera house, a building which is a masterpiece in itself. We saw the small bronze shoes riveted to the side of the Danube to commemorate the 10,000 Hungarians who had been murdered and tossed into the river by fascist guards. We visited the Dohany Street temple, the largest synagogue in Europe, and marveled at the Moorish Revival architecture inspired by Islamic buildings in North Africa. We saw what was left of the Rumbach Street temple where my parents had been married a week after World War II ended. They had stood in a ruin in a clearing in the rubble, in a bouquet of colors scattered by the stained-glass window depicting Joseph, which had miraculously survived the bombing. We took a walk to the magnificent St. Stephen’s Basilica and stared at a glass case containing the ancient hand of St. Stephen himself. People filed by to kiss the case and pray.

We visited the home where I was born at Number One Jokai Street. The new owner, an old woman with gold teeth, told me I look exactly like my father and pinched my cheek with a damp hand. She insisted that we sit and eat the poppy seed cake that she had just baked. I walked out to the stone balcony with Helen and gazed over the tops of the buildings at the Octagon, the spot where Budapest’s main avenues and boulevards intersected. I could see the lampposts from which the Russians had hanged Hungarian soldiers—and the one lamppost that had held the one soldier who’d looked with his dead eyes straight into my own. I shuddered, and Helen put her arm around me as we stepped back inside.

In this land, I could not look with fresh eyes at anything, the way Helen was doing. I found history leaking into my thoughts, the history of invasion and building, palaces and ruins—history blocking my view of what was possible. In the New World, we are always making things. Here, people seemed to be forever relegated to remaking them.

I kept asking myself—what would have happened if we had stayed? With their heavy Hungarian accents, my parents had talked themselves into believing that they no longer belonged here. Looking out over the city, I realized that the trouble with being a refugee is that you never feel a full sense of belonging. And although I struggled to remember my time here, a little of me could still be found in Budapest. It was where my life had begun, and it would always be the land of my childhood.

Joseph Kertes was born in Hungary but escaped with his family to Canada after the revolution of 1956. His novel Gratitude won the National Jewish Book Award for fiction. Kertes founded Humber College's distinguished creative writing and comedy programs. He is currently Humber's dean of creative and performing arts. His new novel, The Afterlife of Stars, which is in part inspired by his family’s own flight from Hungary at the onset of the Hungarian Revolution, is out this month from Little, Brown.

I Liked My Life 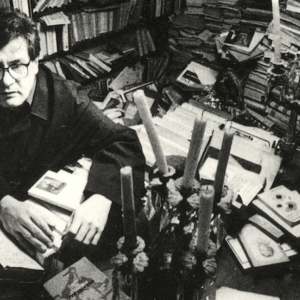 Marilynne Robinson on what we’re losing in President Obama. | Literary Hub From Portela to Meruane, nine books...
© LitHub
Back to top