Timothy Denevi at the White House Ceremony for
the Washington Nationals

It was about halfway through Donald Trump’s scripted speech in honor of the Washington Nationals, baseball’s 2019 World Series Champions—a blue November afternoon, the sky across the South Lawn of the White House burnished by wind and trees and far too many red hats—when our current president somehow managed to mangle yet another baseball cliché.

“He reached back,” Trump said, referring to a home run by Ryan Zimmerman, the longest-tenured Nats player, “took his swing to…”

And suddenly, in a sense of genuine confusion—reached back for what?; took his swing where?!—I found myself recalling one of my favorite moments from the 1988 baseball film Bull Durham, in which the washed-up veteran, played by a 33-year-old Kevin Costner, tells the young hot-shot prospect Ebby Calvin “Nuke” Laloosh (Tim Robbins) that, if you really hope to someday play in the Major Leagues, you’ll first need to master the art of speaking simply.

I’m just happy to be here…

Hope I can help the ball club…
I just want to give it my best shot, and, the Good Lord willing, things will work out…

As in, the whole point of a cliché—that empty and placating form of speech in which Donald Trump has basically spent his life (and presidency) articulating himself—is to avoid the dangerous specificity of language we tend to associate with post-Enlightenment concepts like rationality and the scientific method and a general sense of objective reality

In other words: one of the many ways our current president avoids telling the truth is to immerse himself in the insipid, bromide-heavy lexicon that American baseball players, via a longstanding and at times beneficial emphasis on action over articulation, have inherently learned to rely upon.

Donald Trump emerges before a familiar crowd and proceeds to bemoan, as if for the very first time, the victimhood he’s convinced he alone shoulders.

Which, to be clear, was on this afternoon in no way lost on the actual athletes being honored: men in bright ties and ill-fitting coats who managed to say things like no guy ever gave up and this is a special moment for me and my family and the whole team with the ease and cadence of professionals hoping to reveal nothing more than what they’d attempted, in general, to say.

Still: every time Trump deviated from his prepared script—a barely coherent thirty-minute summary of the Nationals astonishing playoff run—he spoke about the game of baseball in the way that someone like his longtime aide Stephen Miller might… were Miller tasked with explaining to all the non-amphibious inhabitants of our planet the details of a “game” in which each side is forced to throw back and forth a single white egg while at the same time refraining, somehow, to swallow down what’s so deliciously right there for the taking.

“I asked the First Lady, ‘Do you think I can throw a ball as fast as him?’ And she said, ‘Yes, darling, absolutely.’”

“America fell in love with the Nats baseball… That’s all they wanted to talk about. That and impeachment.”

To be honest: what’s left to say about watch a certain overwrought septuagenarian bark and wail in yet another public forum over all the things he believes to have been perpetrated, once and again, upon him alone?

It’s a scene I’ve been attending, with depressing regularity, these last three years; Donald Trump emerges before a familiar crowd and proceeds to bemoan, as if for the very first time, the victimhood he’s convinced he alone shoulders. To which we all then respond in accordance with our predilections… And whether we mock him or ignore him or cheer him or believe the worst is still yet to come we are in the end reduced; simply by our presence in such a spectacle we find ourselves repeating a familiar set of outcomes.

Don’t get me wrong—this isn’t an argument for or against the act of bearing witness to Donald Trump.  Nevertheless, as I stood there on this bright November afternoon—I’ve lived in the Washington metro area for nearly a decade but this marked my very first visit to the White House—I couldn’t for the life of me manage to escape the role in which I felt freshly compelled to play.

For the event I’d dressed in a camel-hair blazer and blue pants and a flower-printed shirt, a pair of yellow sunglasses in tow—my John Dean/Smart Watergate outfit, as I explained to friends and strangers alike.

Among the thousand-person crowd I’d lustily voiced my opinion—booing Trump, and Calvin Coolidge, and also (whenever possible) the Houston Astros.

Once more I’d found the opportunity, during a Four More Years chant that erupted during pitcher Stephen Strasburg’s speech, to shout: “AGNEW IN ’76!”

Nevertheless, a single emotion continued to dominate every aspect of the ceremony: exhaustion. Toward the end of the afternoon, as the light came down against the hard bright façade of the White House, I could hardly imagine (let alone summon) the stamina necessary to wait out all the things Donald Trump still needed to say.

Of course I’m lucky to be able to observe from afar the horror of our present-day train wreck—while donning (let’s not split hairs) an honest-to-god 1970’s costume—but still: I harbor no illusions that the general humanitarian, ecological, and political catastrophe this administration relentlessly perpetrates will eventually jeopardize the existence of us all.

What do you do when the only language you’re continually offered in no way represents recognizable meaning? Just then, hearing our president ramble incoherently, I found myself looking up—toward anything but the enduring spectacle. Overhead, the leaves of an enormous oak tree—I was perhaps a hundred feet from the bone-bright curve of the White House—turned like paper with the wind. And suddenly I found myself recalling another moment, one from our collective political past: Richard Milhous Nixon’s 1974 resignation from the presidency—an event that must have unfolded only a few feet from the exact spot on the lawn I currently occupied.

To be specific, I was remembering a singular image of this event: the artist Annie Leibovitz’s iconic photograph in Rolling Stone of Nixon’s helicopter lifting off the grass, the one in which three White House guards can be seen struggling to roll back up a long velvet carpet. These guards are holding their broad-brimmed hats to their foreheads, fighting the surge of wind at their backs.

Now we’re talking about the opposite of a cliché—a narrative that, via its mode of articulation, remains bigger than the sum of its parts. “A lot can be told,” Leibovitz would later reflect, “in those moments between the main moments.” 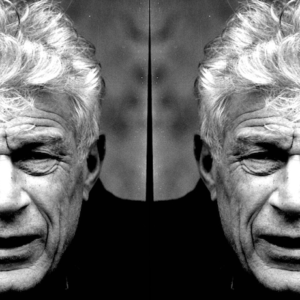 Booker Prize-winner Bernardine Evaristo discusses the illusion of writers’ block, Oprah’s Book Club, and the beautiful...
© LitHub
Back to top