Remembering the Women of
the Green Book

Candacy Taylor Talks to Andrew Keen on Keen On

On today’s episode, Andrew talks with Candacy Taylor about her new book, Overground Railroad, the history of the Green Book, and how far we still have to go when it comes to race relations in America.

Andrew Keen: You mentioned earlier that as a travel writer, you had your experiences on Route 66. There are some wonderful photos in the book of Black women on the road. Do they have a particular place in the Green Book? Is there a gender piece of this narrative?

Candacy Taylor: Yeah, I’ve actually dedicated a whole chapter of my book to women in the Green Book and the role that they played. Victor Green, the creator of the Green Book, dies in 1960, so he never lives to see the passage of the Civil Rights Act in ’64. And the year before he died, Alma Duke Green, his wife, took over the entire Green Book, which is again why she was such a critical force and I don’t think he could have done it without her, because he worked full time as a postal worker and she was also working on the guide. So in ’59, the whole entire green book, the masthead, is all women, and she’s listed as the publisher and the editor, and all the other people listed in the masthead—except for one who has initials and we don’t know the gender of that person—but everybody else listed is female. So there’s that.

And then there were so many female-owned businesses that were celebrated in the Green Book, like tourist homes. They were among the first AirBnbs, where widowed women, generally, would open up their homes if they had an extra bed and allow people to stay, especially migrant people who were leaving the South and fleeing racial terror. It wasn’t just people who were on vacation that were using the Green Book. People who didn’t maybe have much money could rent very cheaply a room and get a warm meal. There were all these beauty salons in the Green Book. There were a lot of female-identified, like Phillis Wheatley, hotels that were in the Green Book. Women played a major factor. In my research it kept coming up, and it was fun to celebrate that and really dig deeper into that.

Candacy Taylor: Well, Overground Railroad came to me when I had a fellowship at Harvard, and I was standing with John Jennings, who’s a really incredible writer, and I said, “It was incredible, it was like this Overground Railroad!” And he said, “That’s the title of your book.” And I thought oh my god, you might be right. There was something so brazen about it, in the similar way that the Underground Railroad was this pathway to freedom. Even though we had Jim Crow, we still had a lot of the tenements, and a lot of white supremacist structures were still very dominant in how Black people were able to move or not move throughout the country. And the fact that Victor Green created this guide where it’s like, I’m taking you to golf courses, you can go to beaches—and this is at a time when major newspapers like the Chicago Tribune told Black people to stay away from beaches because they’re literally an irritation to white people, and even though that’s unfortunate for Black people, it’s better if they just stay away. And the Green Book said, oh, no, no, no, here, you can do this. Here’s what you do. These are the places you can go.

So in that way, it was very innovative, the ingenuity that was involved in creating such a pathway for Black folks, in a similar way that the Underground Railroad did. I thought the stakes were similar in terms of death. If you ran into the wrong sundown town, you could get lynched or harassed. There were so many parallels in terms of this is what the 20th-century Overground Railroad did. And I think we’re in a current state now with police violence and brutality where we really do need to remind ourselves, where are we now? And how much of a pathway do people have? My book ends in this story about mass incarceration, which I think is a civil rights crisis of our time. How many of those folks leaving prisons need an Overground Railroad pathway into just a normal life where they can make a living and not be branded as a felon and not be allowed to vote? There are all these rights that have been taken from us systematically in this country, and it continues. That’s why I titled it Overground Railroad.

Candacy Taylor is an award-winning author, photographer and cultural documentarian. Her work has been featured in over 50 media outlets including the New Yorker and The Atlantic. She is the recipient of numerous fellowships and grants including The Hutchins Center for African & African American Research at Harvard University and the National Endowment for the Humanities. She lives in Denver, Colorado.

Rev. William Barber on the Reality of COVID-19 Deaths and Why We're Not Eulogizing 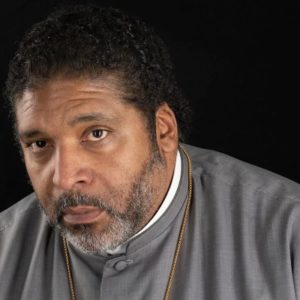 Rev. William Barber on the Reality of COVID-19 Deaths and Why We're Not Eulogizing