Ibrahim Ahmad on Collaborating with a Hip-Hop Great

Like so many others, I grew up totally hooked on Mobb Deep—their records have remained in constant rotation on my stereo for over 20 years—so I was thrilled when Prodigy reached out to Akashic in early 2013 about collaborating on his Infamous Books imprint. At the time, it felt a little curious that someone of Prodigy’s stature would approach a small indie press known more for its punk rock aesthetic and a profane fake children’s book (Go the Fuck to Sleep) about not just putting out his writing, but on launching an entire publishing venture together. Surely, one of the most significant figures in hip-hop history (and one of the finest poets of our lifetime, which is an indisputable fact) could land the book deal of his choosing. But upon connecting with P, everything began to click, and the collaboration soon developed its own logic. Every aspect of Prodigy’s personality was fiercely independent, a real-life embodiment of the do-it-yourself ideals that Akashic has tried to espouse since our founding. Around the time we published Prodigy’s novella H.N.I.C.—as Mobb Deep was about to embark on a world tour that continued pretty much nonstop through to their final show this past Saturday in Las Vegas—I casually asked Prodigy about his future projects. After only half-joking that he could use a new motorcycle (the man loved his bikes), he gestured back at our gritty, ragtag office and said with surprising conviction, “I want to build something like this,” before offering one of the best endorsements of the value of independent culture that I have ever heard. He spoke passionately of the imperative of artists retaining ownership of their creative material—for artists of color in particular—and of controlling the modes of production and distribution from the top down, envisioning a more equitable model outside of the sometimes claustrophobic or exploitative demands of the corporate world. (Anyone who has checked “YBE (Young Black Entrepreneurs)” from his excellent H.N.I.C. solo record knows exactly what’s up with this.) He envisioned turning his recording studio into a compound where he could juggle his music along with film projects, literary ventures, plays, and merchandise, all under the “Infamous” umbrella—essentially, a place to incubate creativity in a way that could be self-sustaining and wholly independent. And to his immense credit, Prodigy was never just talk, as his prolific output can attest: he worked tirelessly, motivated by an urgency that perhaps arose in part from the illness he battled from birth and that ultimately ripped him from us at a moment when we could use his insight the most.

–Mobb Deep, “Survival of the Fittest”

And despite the impression that one might understandably get about Prodigy from his brutal, visceral lyrics on drop-dead classics like “Survival of the Fittest” or “Nighttime Vultures” (and goddamn, he dropped so many gems over the years), anyone who spent more than two minutes in his presence would know that he possessed an understated humility that completely belied his intimidating stage persona. For all his real-life swagger (which, to be 100 percent clear, was no joke), the dude had a wicked sense of humor that often expressed itself in his weirdly enigmatic, deadpan delivery. (Case in point: when Prodigy appeared as a judge in the popular Literary Death Match reading series deep in the heart of hipster Brooklyn, which he did on several occasions, I literally had tears in my eyes watching him skewer some of the aspiring bolo-tie-wearing writers onstage, even if few of them realized it at the time—trust me, no one can tell you that your bullshit novel idea is totally whack quite like P could.)Yet at the same time, Prodigy remained immensely generous of spirit, nurturing up-and-coming musicians and authors alike, throwing his weight behind writers who he believed in. (Through Akashic, the Infamous imprint published books by K’wan, JaQuavis Coleman, Miasha, Shannon Holmes, and the late Mazaradi Fox from G-Unit, along with Prodigy himself.) And his work as an advocate for prisoners (brilliantly captured in Commissary Kitchen, essentially a cookbook for the incarcerated, replete with recipes and anecdotes from the three and half years that Prodigy served behind bars) was borne of his fundamental belief that people do not lose their humanity when they get locked up, and as such shouldn’t be fed like animals, which inexplicably sounds like a radical idea today. For P, it was no thing to show up at the Queens Library to spend an afternoon talking to young people, serving as an unlikely role model for so many kids, or to donate his time by hanging out at the Akashic booth at the Harlem Book Fair each July, or any of the dozens of book events he conducted over recent years. (I suspect that not many rap legends have held signings at the Mysterious Bookshop in Tribeca, Otto Penzler’s legendary shine to crime fiction.)On a personal note, there’s something immensely comforting in the knowledge that P—one of my very few actual heroes—ended up being the quintessential Akashic author, a true renegade and rebel who lived life according to his own terms, never compromising his beliefs while still treating the world and those around him with respect. (It doesn’t hurt that unlike others in the publishing industry who might have a misguided faith in the value of literary awards, New York Times best sellers, or a diversified stock portfolio, my career aspirations were met in full after getting a name-check from Prodigy onstage when he performed a live set at the Calabash Literary Festival down in Treasure Beach, Jamaica, a few years back.) As evidenced by the packed rooms at recent shows at Blue Note and countless venues across the country, I take heart in knowing that P’s work will endure. And I feel grateful and privileged that we were able to have a small role in it.

Ibrahim Ahmad is the editorial director at Akashic Books, where he has worked in various capacities since 2000. He teaches at the Wilkes MFA Low-Residency Creative Writing Program and Literary Publishing MA Program, leads frequent writing workshops, and is the cofounder, with Akashic publisher Johnny Temple, of Brooklyn Wordsmiths, an editorial and consulting program. In 2015 he was named one of four finalists for the inaugural Star Watch prize by Publishers Weekly, awarded to “young industry professionals who have distinguished themselves as future leaders of the industry.”

Pamela Paul on the Beauty of a Disorganized Bookshelf 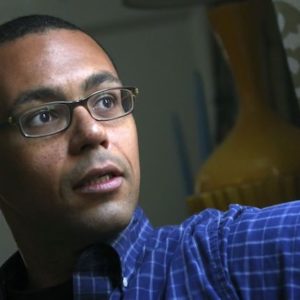 What was the first book you fell in love with? The first book I ever loved, like walked around with it and never let it go, was probably...
© LitHub
Back to top