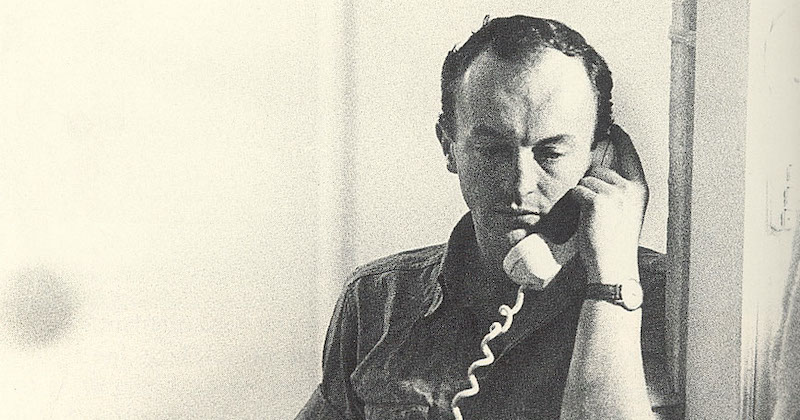 Fifty-seven years ago this month, Frank O’Hara moved into his last New York apartment, a floor-through loft at 791 broadway, across from Grace Church. As Brad Gooch describes it in his fabulous biography, City Poet, the place sounds like a deal. For $150 a month ($1200 today) it provided two bedrooms, two fire places, and a shower. It had space for O’Hara’s growing art collection—works by Helen Frankenthaler, Larry Rivers, as well as Elaine de Kooning, who had apparently taken over the building earlier and made it not just livable (her studio had been an orthopedic supply chain’s office), but cool. By August O’Hara was throwing big cocktail parties, the first of which was in honor of John Ashbery, who returned that summer from several years abroad in France.

In the 1960s, when airmail was all the rage, a person moving abroad meant they were out of the scene. Gooch includes a detail here which I have always found touching—especially so now, when I haven’t seen most people I care about for months: that while Ashbery was away, O’Hara always read from his work whenever he was asked to perform his own poetry. In fact, O’Hara was one of the only poets at the time, Gooch reminds us, who dedicated large chunks of all his readings to trumpeting the work of other people. And thus while Ashbery was away the poet became something of a cult figure—heard from but not seen.

What an incredibly generous impulse. But that is the O’Hara who emerges from City Poet. Some writers in The New York Poets circle were apparently aloof or arrogant. “Whereas with Frank anyone who wanted to could go along to the Cedar Bar and have a couple of beers,” Gooch writes. It went beyond drinking, though. O’Hara convinced Larry Rivers to sell paintings so a friend could get analysis. A famous one for the 4am phone call, O’Hara was always around, available, for a chat or advice. And when someone said something he found amusing, O’Hara gave them credit. “Neon in daylight is a/great pleasure,/As Edwin Denby would/write” goes the line in O’Hara’s great poem “A Step Away from Them,” “as are light bulbs in daylight.” For years, Denby and O’Hara attended the ballet together, talking it over at the Carnegie Tavern afterwards.

When I first moved to New York, twenty-four years ago this month, City Poet was the book I lugged around, marveling at 1956’s streets ghosting up from 1996’s streets, all the places poetry had been discussed and made. City Poet was not a guide book, but in my own nerdy way I used it like one, carving Manhattan up into “in the book” and “not.” Lately, though, I realize what filled me with longing on those sweaty walks home from work—sad I wasn’t leaving a desk at the Museum of Modern Art—is how much of Gooch’s biography told a story of friendship and generosity. Of people making something new and feeling less alone while doing it, because they were doing it side by side.

You feel this collaborative spirit overflow into the best poems O’Hara wrote from in era—their lines zigzagging to unexpected destinations along a stepping stone path of real people’s names. All of these people now dead. Read in this odd spring of 2020 this can give O’Hara’s work the gloomy green shade of a columbarium. Or maybe that’s morbid. It’s not an archive of ashes, perhaps it’s just the record of a spirit made happy at being together. The work of a guy whose first instinct, on landing a big Manhattan pad, was: great, now I can fit everyone inside.