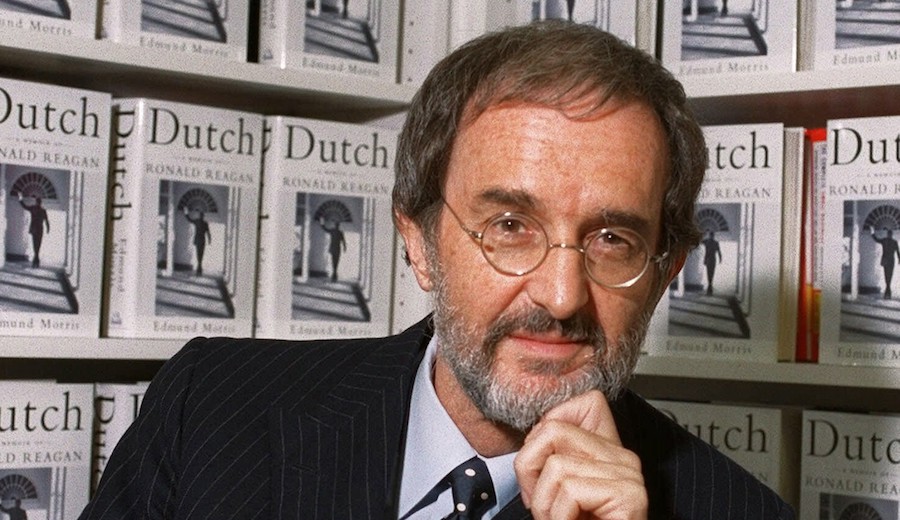 On May 16, 2019, I emailed the biographer Edmund Morris after reading the first pages of his forthcoming book on Thomas Edison: “One of the best first sentences I’ve ever read. And the second one is even better.”

He wrote right back. “The last sentence isn’t bad either. It’s the ones in between that are the problem!”

I couldn’t wait to talk to him about all those words “in between” at a Memorial Day party I was hosting that he and his wife Sylvia Jukes Morris planned to attend. I had been thinking (and writing) about how we memorialize someone or something and figured Edmund was privy to knowledge beyond my years. With biographies on Theodore Roosevelt and Ronald Reagan under his belt, surely, he considered this subject this, too.

The fact that it was Memorial Day and his birthday both figured into the impending conversation I couldn’t wait to have. But someone or something had other plans.

“I have some terribly bad news,” Sylvia said to me over the phone six minutes before the holiday parade. “Edmund died.”

“I don’t know what to say,” I replied because I didn’t. I turned toward my sink with a pan of lentils in my hand. Outside, I heard the approaching flutes and snare drums and light clapping of the town parade.

Sylvia’s call was both practical and generous, as was she, making sure to update her RSVP and telling me of Edmund’s death in the most nonsensical way, while trying to buffer the shock. “Edmund really liked you,” she said gently. “You were kind of soul mates in a way.”

Introduced by mutual friends, I had known Edmund only for a year, but we’d hit it off right away.

When we met he was finishing his book and I was mid-draft in mine about a small paper mill town in Western Maine. I mentioned our two main characters, Thomas Edison and Hugh Chisholm, a paper-making industry magnate, allegedly knew each other in their youth.

The next morning he emailed me:

How about this for quick service. There’s only one letter from Edison to Chisholm in the five-million-document [!!] Edison Papers—a letter dated 17 October 1912, which I presume must have been around the time Chisholm popped off. It mentions newspapers, so may contain memories about their days on the Grand Trunk RR. I’ll ask the archivist in West Orange to scan it for me, and will send it on.

Four days later, he sent the promised letter. With footnotes. In a small but complete way this was Edmund to a tee: thorough, honest, prompt, a gentleman with a quick sense of humor and a writer’s curiosity. Most of his obituaries, however, have focused on his unconventional biography of Reagan and the overall criticism he faced for subverting the traditional tome. If I’d had the chance, I said to a friend, I’d applaud him for writing a biography more germane to the person at hand than recount the facts of the subject’s life, like so many bad biographies do.

For a man with a Pulitzer to his name, Edmund was unfussy about the legend he’d eventually leave behind. The Morrises came by on Christmas 2018 for a cocktail or two and I noticed that even though there were probably more interesting people he could have met, he spent most of his time talking to a teenage boy about the importance of being outside, having adventures, and caring for the planet as his generation didn’t do so well. Another friend introduced herself and asked what he did. “I’m a writer,” he replied and left it at that. Then he and Sylvia flitted off to other affairs and his “final frenzy” on the Edison biography.

I had tried to lure Edmund and Sylvia to dinner a few times but he was adamant about finishing his book before leaving his desk for too long. “When I’m through with this goddamn book, we will ensnare you to dinner,” he wrote and so he did.

Five months later, when Edison galleys were finally done, he wrote to invite us for that dinner: “Short notice, but any chance you two might be free for dinner in Kent on Saturday nite? E.”

My husband and I met them that weekend and we talked of Gorbachev, book criticism, diplomacy, classic British cars, and Edmund’s desire to see some piano concert in a small town in Norway. Then Edmund asked about my fledgling book, which he said he couldn’t wait to read. Whether that was true or not didn’t matter much to me, but it spoke of conversations we’d have another day, when there was more time.

So when Sylvia said to me generously about that dinner “at least you had that memory with him,” I agreed.

I always thought a quick death was better than a slow decline but now I’m not so sure. When Sylvia spoke the words “Edmund died,” at first I thought it was a joke until the brutish surprise of her words sunk in. I offered to cancel my party and drive to Kent where she lived. Of course she demurred. Then I thought of all the dinners we’d never share, the vintage car races we’d never attend, the interview we’d never do, the birthday cake I had bought that he’d never get to eat, with our birthdays but a week apart.

After lunch on Memorial Day I gathered our friends around our yard, told them about Edmund, then brought out his birthday cake decorated with “79” in beeswax candles that wouldn’t stay lit. It was one small, good thing we could do (to take a note from the pages of Raymond Carver) to honor his presence and his absence and the one day that marked death.

After the brisket was gone and the half-empty beer bottles piled up under the dogwood trees, I sat down to consider the last words he gave to me. “It’s the ones in between that are the problem!” he had written, which answered the questions I never got to ask about the best way to memorialize someone. It’s not what we do at the beginning or the end of our lives that counts; it’s what we do in between.