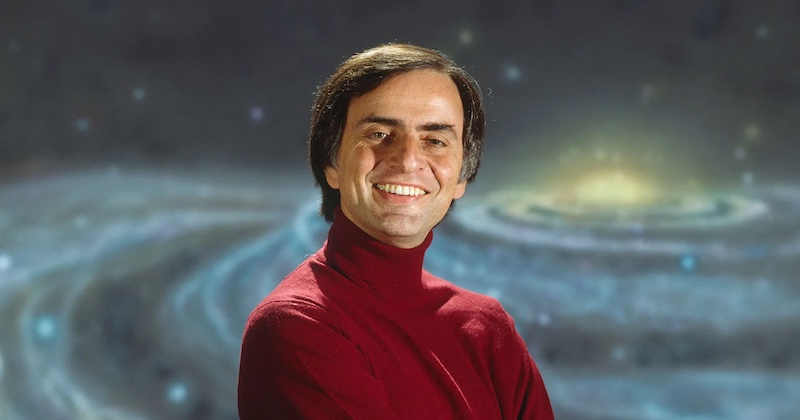 Today is the birthday of the late Pulitzer Prize-winning astronomer, professor, and science writer Carl Sagan, otherwise known as Carl Sagan Day. Born in Brooklyn in 1934, Sagan was an avid fan of science fiction at an early age; he got lost in the worlds of Edgar Rice Burroughs, particularly his John Carter novels. In 1955, he earned his bachelor’s degree and in 1956, he earned his master’s degree. Both degrees were in physics and were awarded by the University of Chicago. After earning his Ph.D. in astronomy and astrophysics from UChicago in 1960, Sagan took up teaching at Harvard. In 1968, after Harvard declined to give Sagan tenure, he joined the faculty at Cornell University as the director for the Laboratory for Planetary Studies and the associate director of the Center for Radio Physics and Space Research.

To say that Sagan was prolific is an understatement. Over the course of his career, he published more than 600 scientific papers and articles and was the author, co-author, or editor of more than 20 books. He received 22 honorary degrees from American colleges and universities for his significant contributions to science, literature, education, and the environment. His well-known PBS series Cosmos won Emmy and Peabody awards and was watched by “more than 500 million people in 60 countries,” according to the Cornell Chronicle. In 1996, he published his final book, The Demon-Haunted World: Science as a Candle in the Dark, which became Sagan’s eighth New York Times bestseller. His 1985 novel Contact was turned into a major motion picture in 1997 and starred Jodie Foster. Sagan and his wife, Ann Druyan, co-produced.

Sagan, who contributed to space expeditions such as NASA’s Mariner, Viking, Voyager, and Galileo, may not have fully believed in extraterrestrial life—or at least the image of little green men and flying saucers mythologized in pop culture— but that didn’t mean he was totally averse to the idea of life existing beyond Earth. In one of his final interviews before his death at 62, Sagan said, “I’d rather there be extraterrestrial life discovered in my lifetime than not. I’d hate to die and never know.”

If life exists on other planets, what would Sagan envision? Well, if you take anything from this 1978 appearance on The Tonight Show with Johnny Carson, then it certainly wouldn’t look like the overwhelmingly white future depicted in George Lucas’s Star Wars. Carson brings up the topic by mentioning that Sagan was quoted in the media about recent movies, including Star Wars and Close Encounters of the Third Kind. Carson says that Sagan “thought they should deal a little closer with scientific facts.” Sagan confirms this statement and explains, “the 11-year-old in me loved them, but they could’ve made a better effort to do things right.” Sagan doesn’t mince words and calls out the whiteness of Lucas’s far-flung galaxies: “They’re all white. The skin of all the humans in Star Wars, oddly enough, is, like this [gestures to his own skin]. Not even the other colors represented on the earth are present, much less greens and blues and purples and oranges . . . Everybody in charge of the galaxies seem to look like us.”

Sagan’s words may offend some die-hard fans, but he’s not entirely wrong. The Star Wars franchise, like any other super popular and visible fandom, has its own issues with racism and representation (or rather the lack thereof). Recently, John Boyega, who played Finn in the latest installments, openly discussed the racist abuse he endured while making the series. “Nobody else in the cast had people saying they were going to boycott the movie because [they were in it],” he said in an interview with British GQ. Speaking on the violent antiblackness he experienced from so-called fans, he added, “Nobody else had the uproar and death threats sent to their Instagram DMs and social media, saying, ‘Black this and Black that and you shouldn’t be a stormtrooper.’ Nobody else had that experience. But yet people are surprised that I’m this way. That’s my frustration.”

To watch Sagan’s full interview with Carson and learn more about his feelings on Star Wars, check out the video below.