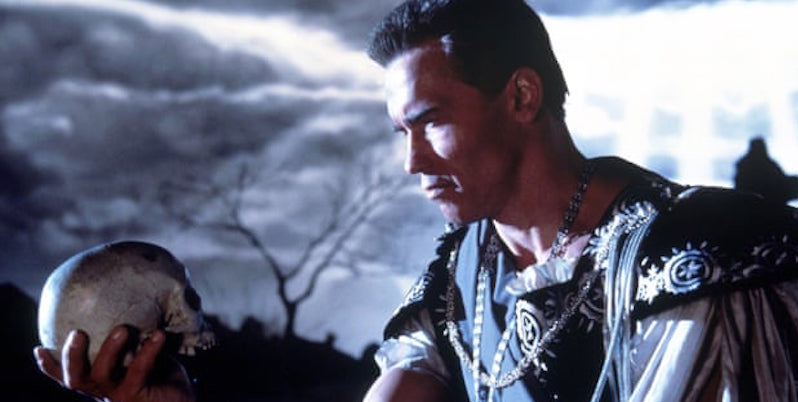 Arnold Schwarzenegger is in the news today because he wrote an article for The Atlantic titled “Don’t Be a Schmuck. Put on a Mask.” The article itself is a lot—Schwarzenegger quotes John Adams and Team America, gives a shout out to “beautiful, powerful” rhinos, and refers to his metal endoskeleton (we usually just call those skeleton, but I appreciate the specificity). That last one led me to wonder whether Schwarzenegger identifies himself only with the most iconic characters he’s played, or with all of them—including Hamlet.

That’s right—the Terminator once (briefly, satirically) played the Ruminator. In the possibly brilliant 1993 meta-action movie Last Action Hero, Schwarzenegger plays, yes, an action hero who doesn’t realize he lives in a fictional universe until his biggest fan, a kid with a magic movie ticket once owned by Houdini(??) crashes through the screen and upends his fictional reality (okay, I said possibly brilliant). Early in the movie, Danny (the kid), bored by the lack of action in Laurence Olivier version of Hamlet he’s watching in English class, imagines a better version, starring Schwarzenegger’s Jack Slater.

Tagline: Something is rotten in the state of Denmark, and Hamlet is taking out the trash.

Watch the whole clip in all its decisive glory:

No word on how Ophelia makes out in this version, but I’m not optimistic.