On Writing About Political Conflict in Today's America

On this episode of Rekindled, Andrew Altschul is in conversation with Ellen Meeropol. Andrew Altschul’s third novel, The Gringa, was published the day before the World Health Organization declared the coronavirus crisis a pandemic. Ellen Meeropol’s fourth novel, Her Sister’s Tattoo, comes out next week, as three-quarters of US citizens are sheltering in place. Both writers have focused on political conflict and matters of social justice in their work, as in their lives; their new books share an interest in such issues, as well as thematic examination of America and Americanness, and questions about the relationship between literature and real life. They spoke on April 1 about the challenges they confronted in writing these novels, and in introducing them to a world in crisis.

Andrew Altschul: Anybody who’s writing about politics, about culture, about social justice, immediately runs into this question: Am I writing a novel or am I writing some kind of a polemic, some kind of a rant. There are certain stories that have a lot more at stake for some people than for others. I was acutely aware that as an outsider, even someone who had lived in Peru for a couple of years in the late 1990s… and yet I’m not Peruvian, Spanish is not my first language, I was not there during the war—what right does someone like me have to write this story? It really had me tied up in knots for years. I didn’t know how to answer the question, Who am I to tell this story?

Ellen Meeropol: Her Sister’s Tattoo is a sisters story. The characters over time have become fuller and more complicated and more self-contradictory, like many of us are, particularly when it comes to making choices about politics. As a friend of mine said recently, they represent the push-pull inside of many activists. We contain both a Rosa and an Esther as we try to think about how we make change in the world. Themes about family, about having children, about doing politics, about being an activist and trying to have a family and protect the next generation, the way parents and many other adults try to nurture and protect the next generation—all of that is very much threaded through this novel, in my mind. 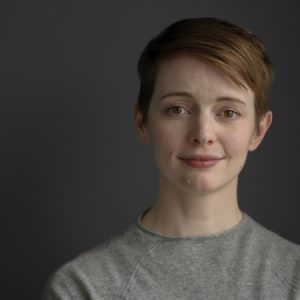 On this episode of Sheltering, Emily St. John Mandel speaks with Maris Kreizman about her recently released novel, The Glass...
© LitHub
Back to top