Marjan Kamali on Visiting the Homes of Her Readers

Imagine being a fly on the wall for gatherings where friends who’ve known each other for years share intimate details about love, loss, and the longings of their lives. Imagine being invited into the homes of complete strangers to share a meal and discuss politics, religion, and other matters of the heart. It might seem impossible or even unpalatable to some. But that is exactly what authors do when they accept an invitation to visit a private book club. And if their novel, like mine, is about first love and how the past is always haunting us, what ends up happening at these visits is often magical, occasionally uncomfortable, and always edifying.

Book clubs have become ubiquitous in the lives of many Americans. All across the country, groups gather on a regular basis (usually monthly) to discuss a specific book. An ongoing trend is for authors to make themselves available to visit, whether by showing up in person if the club is local or via Skype and FaceTime if it is further away. For my first novel, Together Tea, I visited 39 book groups. For my new novel, The Stationery Shop, which came out last summer, I have visited 26 groups so far.

My visits have shown me that these gatherings are far more than a vehicle to talk about a book. They are a refuge from the day-to-day demands of raising a family and also a place to share frustrations and receive advice about doing so. They are an excuse to get together to gossip and also a reason to read the classics or contemporary authors one would never touch without the chorus of the book club chiming in.

They are a secure bubble away from the daily drudgery of work, and an opportunity to engage in intellectual dialogue. They can be a night of wine, a reason to share recipes, a fun haven and occasionally a place to butt heads.

Often these gatherings can be a huge ego boost for a guest author—a love fest where readers share their reaction to the story and how much it meant to them. Usually, I start by sharing the story behind the story and some behind-the-scenes anecdotes about the writing process and the journey to publication. We delve into questions about the characters, plot, theme, etc.

What is most revealing is being able to see the dynamics of each book club first hand. Writers are observers by nature. We are curious and, quite frankly, nosy. So to sit in the living rooms of strangers is incredibly rewarding not because we get to be feted by appreciative readers (though that is welcome and fun, no question) but because we also get to see the specific history and texture of each book group.

These book clubs are, much like the Persian social circles of “doreh”—a tradition where a group of women meet regularly to connect and chat outside of the context of work or family—a lifeline for many members. They are places to talk about the things they would never otherwise discuss.

I’ve visited clubs where members are younger women with ambitions and dreams they are worried will never come to fruition. The book becomes a springboard to discuss their own chance at fulfillment in family and work lives. There are the book clubs that were started when the members had toddlers and now those toddlers are grown adults with babies of their own. The members have shared, through the discussions of books, all the ups and downs of raising a family and aging.

Often, we get into politics because it’s hard to discuss a book about Iran without digging into politics (I would argue it’s hard to discuss any novel without examining the political context). It is a relief to see that in most book clubs, unlike in so many other arenas of American society, discussing politics, religion, and deeply personal fears is not taboo and actually desired.

These book clubs are, much like the Persian social circles of “doreh” . . . a lifeline for many members.

Above all, because The Stationery Shop is a novel about first love, I often find myself in situations that can get highly emotional quite fast. For one club I visited, once we were all settled and had started discussing the characters, one of the members revealed that she had reconnected with her first love and hoped to reunite with him. This was said in a room where the other members were friends with her current husband and close to her kids. In the ensuing awkward pause, she broke down and literally wept on my shoulder. Then one by one, others in the group shared their own secrets.

There was a club where the members couldn’t agree on whether the husband in my novel, Walter, was too generous with his wife’s desires and the disagreement on the topic led to people on Team Walter getting up from the table in a huff. In another meet-up, a psychologist kindly and methodically identified the personality disorder of one of my main characters, praising me on the scientific research I had done to accurately capture a mental disorder (I had done no such research but it was edifying to learn my character’s condition had a name!).

The discussion in book clubs brings to light themes and patterns in the novel I wasn’t even aware were there. One book club in Massachusetts revealed to me how the first love/lost love theme in my book ties into the loss of country. Symbolism I didn’t know I had included—at least not consciously—is sometimes uncovered. Above all readers’ links to the characters’ experiences and history have blown my mind.

One of my most memorable visits happened earlier this year after the US killed General Qasem Soleimani and we waited fearfully for Iran’s retaliation. When the missile strike came, there was talk of war all over social media and in the news. Iranian-Americans like myself were at once petrified of what war could mean for Americans and for our Iranian relatives in Iran. We were also hyper aware of how we might now be perceived as the enemy.

The last thing I wanted to do was visit a book club with all eyes on me. I wanted to sit with my kids on the sofa and pretend the world outside did not exist. I wanted to wear my pajamas and burrow under a blanket and not have to explain Iran (any version of it) anymore. I almost backed out. But of course, I was aware of how my privileged position enabled me to share my writing, to have my books read and discussed. What about the friends and family I had left behind in Iran? Misunderstanding and silence could cost them their lives.

As I shook the snow off my hat and gloves in the host’s lobby, I steeled myself for the questions that would come. How did I feel about the impending war?  (Petrified.) Why were we in this spot to begin with?  (How much time did they have?) Why was all this happening?

When Jan opened the door to her apartment, I entered a warmly lit, beautifully decorated loft. About 15 people stood chatting. When I arrived, they stopped. Jan’s husband took my coat and led me in. To my left was a counter laid out with food. For a minute I was confused. The mint and tarragon and feta cheese and radishes arranged on a large round platter were exactly how my grandmother would arrange sabzi. Small dishes of cucumber-mint yogurt and eggplant dip dotted the counter. I could smell the Persian fesenjoon dish made with walnut, pomegranate molasses and chicken.

“We wanted to surprise you,” Jan said sheepishly. “Each person has brought or made a Persian dish. We’ve been busy!” I staggered through the loft in a daze and shook hands and met the readers. I had worried I might be seen as the enemy but more than ever the book club members wanted to connect.

That night we sat around a long table. We talked about the loves from which, as F. Scott Fitzgerald said, we can never recover. We discussed the coup d’etat in Iran and the unbreakable bonds between sisters and how mental illness can harm those we love and ourselves—all themes from the book. And yes, we discussed the prospect of war with Iran. But the discussion felt intimate and professional at the same time. I felt, strangely, as if I were home.

On the drive back, I kept hearing the last thing Jan said to me. “We are so glad you came. We are so grateful you are here.” And I was made of tears. 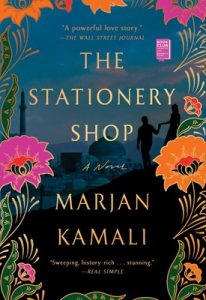 Marjan Kamali, born in Turkey to Iranian parents, spent her childhood in Kenya, Germany, Turkey, Iran, and the United States. She holds degrees from UC Berkeley, Columbia University, and New York University. Her work has also been broadcast on BBC Radio 4 and published in two anthologies: Tremors and Let Me Tell You Where I’ve Been. An excerpt from The Stationery Shop was published in Solstice Literary Magazine and nominated for a Pushcart Prize. Her debut novel Together Tea was a Massachusetts Book Award Finalist, an NPR WBUR Good Read, and a Target Emerging Author Selection. Marjan lives with her husband and two children in the Boston area. 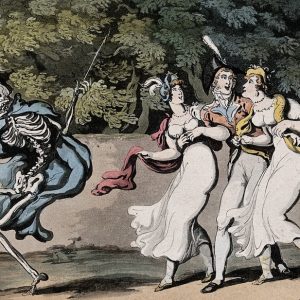 Usually a question like this is theoretical: What would it be like to find your town, your state, your country, shut off from...
© LitHub
Back to top
Loading Comments...