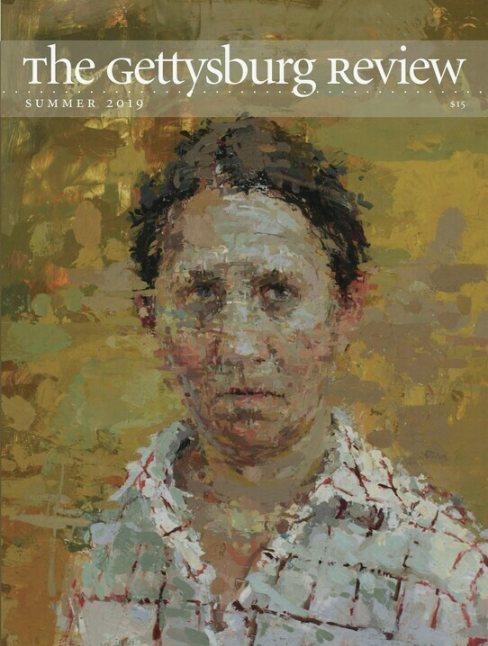 The following is a story by Kathy Chao excerpted from the Gettysburg Review's summer 2019 issue. Kathy Chao is an ex-resident of Riverside, California, and a graduate of Colgate University. She lives and works and broods in New York City. This is her first publication.

The Science Fiction Writers Association does not tell him much, only that he will be taken in the dead of night to shoot down to Los Angeles in a high-speed train. There will be two men, they tell him, who will ride with him and deliver him to his final destination. As she books his tickets, his daughter tells him that they are minor league critics who are heading down from Riverside as well.

“Riverside to Union Station, round trip, one adult,” she mutters to herself as she makes the selections on an impossibly thin computer. She answers in distracted, half-formed sentences when he presses her for her theories on his traveling companions: Are they tall and mysterious? Will they be wearing dark shades or not? Sporting slicked hair or bright, bald heads? She tells him their names, which he promptly forgets. She offers him a train at an earlier time, which he turns down. He likes the poetic excitement of the dead of night. She pulls a thin piece of plastic from her purse and types in the string of numbers that will hurtle him toward Los Angeles.

The Science Fiction Writers Association tells him that this is a great honor. His daughter hugs him and tells him that finally he is getting some recognition, that in a fair world, he would have had his own wing in the Getty years ago. The two men (disappointingly gray haired and polo clad) emerge from the crowd and tell him that it is a pleasure, a delight. The taller, grayer of the two takes his hand and pumps it enthusiastically.

“A delight, an absolute delight,” he says. He has been a fan since he was a boy. The hanging city from 1964 was gold, pure gold. Wonderful to meet him. Wonderful that they are finally appreciating his work. He trails off into incoherent excitations. His shorter companion smiles sheepishly and makes introductions for the both of them.

It is 1965, and the Inland Empire is little more than the dusty tail left in the wake of coastal California’s meteoric rise to wealth.

But he has already filed their nondescript faces away as A and B. By the time they pull out of the station, A has taken off his sport coat, and B has put on a pair of reading glasses. He is sketching them as silent, shadowy figures, bald, dark shaded, alert—prepared to protect and defend against whatever else has boarded the 9:00 pm from Riverside. Not yet the dead of night, but dark enough. No midnight abduction is complete without rolling waves of fog; he shades in enough to stifle the moon and the guiding stars. Or maybe (he hasn’t decided yet) they are on an alien world where celestial bodies are never visible to the lonely night-watchers. Somewhere, a tall figure in a long coat clacks down a cobblestone street, his collar turned up against the night. He will be important later, maybe. Somewhere else, clad in a standard issue red-and-blue spacesuit, a woman with his daughter’s face is punching commands into the air.

“Riverside to Union,” she is muttering, and they are beaming him home.

The heat in the Inland Empire is made of sand and ash. It drives him before the bathroom mirror to examine his cracked lips and sandpaper elbows in the cool light, to smear his body with petroleum jelly until he gleams, almost amphibian. When his daughter complains about the late summer gusts that blow sheets of dust into their faces, he reminds her that this is not new to them.

“The Santa Anas blow in LA too,” he says. “They’re harmless.”

He does not tell her that they were once called the Satanas, the winds of Satan, when they swept through Spanish America the way they sweep through now, or that each fall, facing wind speeds upwards of forty miles per hour, the county’s fire department raises its force by 20 percent to battle the fires that pour through the yellow-tufted hills. He does not tell her that when he smiles at her, he can feel the grit crunching along his oiled lips, and he knows that she’s right, that it was never like this back home. Sixty miles inland, and he’s a stranger in a strange land. It is 1965, and the Inland Empire is little more than the dusty tail left in the wake of coastal California’s meteoric rise to wealth. By the new millennium it will be a bustling hub in its own right, but for now its rules are the desert’s rules, and they live and burn in a blaze of sun and walk in such familiarity with the heat that he half believes they are made of it themselves, confused coils of light and fire and sweat. As he draws in the first cool breath of evening on a day the thermometer broke 110—a day his daughter cracked eggs over the sidewalk, a day he saw her swimming toward him in a watery mirage—he is almost convinced that a fine mist would be enough to extinguish their new fiery world.

They are saying that the universe is unimaginably large and getting larger all the time.

And if they could survive this, he tells her, they could certainly survive the sand monsters that roll in with the devil’s breath each scorching fall. He does not know how many arms to give them, how many mouths and vengeful hearts. He pins them up in her bedroom, apocalyptic cartoons for a sunburnt girl, and changes them each year so they come roaring back to life. But as the years pass, the winds become too familiar and warrant no more than exasperated sighs. When she moves out, he takes the drawings down. And when a small tumble and a broken hip bring her worrying back, he takes them out again to marvel at the simple terrors of the past. He lifts his pencil to revive the ephemeral cities of the fire planet, but he does not have time to save its inhabitants or infrastructure before the summons from the Science Fiction Writers Association comes and commands evacuation.

Outside, Riverside blurs in a plume of dust. He likes the feel of the city streaking by. He flips to a new page and sketches in the first tentative lines of streetlights pulled long into the night: the trail of shooting stars, meteor showers blasting through the sky, and, in a tiny bullet of a rocket, two nameless agents of an intergalactic association escorting an old man to the edge of the world.

This is not quite a figure of speech; 1964, and a voice on the radio tells him that they have definitive proof that the universe is expanding. The debate has been settled, it says triumphantly. (Fred Hoyle, king of the steady state, will fight a los- ing war for his pet theory until his death in the first year of the new millennium. But as for the rest of the scientific community, they are convinced.) Stephen Hawking and Martin Rees are at the forefront of the new big bang theory; this is the changing of the guard, and the cosmological world is alight with possibility. They are saying that the universe is unimaginably large and getting larger all the time. They are saying that it is an infinity expanding into infinity. They are saying that this changes entirely the way we perceive the world. They are saying this and that in technical jargon that he cannot understand as he listens, bent over his desk. He does not understand again until the radio host breaks in, thanks the most brilliant minds in the world for their time, and sums it up for his listeners. The static-clogged voice tells him that what they mean is that the universe is expanding at a faster rate the farther away it goes. The voice is getting excited. It says that this could be the frontier of a new physics, where the rules that govern our world, the conventions of space and time, may not apply. He cannot quite grasp this, but the voice speculates that maybe everything we do and know is happening right here and right now, that we are all existing in an infinite present. He scoffs instinctively. This is pseudoscience, sensationalist science, but he can’t help dreaming along as the voice narrates him to the universe’s timeless, spaceless edge.

Beside him, A is still harping about the hanging city. He says that it would have been a mediocre, forgettable story about time travel in an era chock full of hyperbolic science and cheesy what-ifs, if it weren’t for the spectacular illustrations.

B looks up, embarrassed, from his serious book.

A gushes that he saved the story. He saved science fiction. Ray Bradbury proved that time travel and aliens could be literature, and he proved that they could be art. The first time he read it as a boy, A was only vaguely interested in the done-again tale, until the hero (scrawny, bespectacled, and adolescent, i.e. of sci-fi convention) steps out of the time machine and into the year 2050, the farthest edge of the time-traveling horizon imaginable in 1964. It is not so far away—A knows this now. His children will be full bloom in 2050; his grandchildren will one day know it as the easy present and then the fond past. But it is 1964, and he is trying on bar mitzvah ties, and 2050 might as well be another planet. He flips the story’s page and finds himself lost in the same-but-not-the-same world of the future. The earth has been destroyed by a rogue scientist whose catastrophic experiments have rendered all land and soil a bubbly, acidic, diseased wreck. And it’s up to our hero, the very much average Joe, to travel back to the present (or past, as he comes to call it) and stop Doctor Menace and his gang of mad chemists before the future dribbles away. But first Joe marvels at how his great-grandchildren have learned to live. First  he rides the insta-lift 250 stories into the sky and gapes at the view, at the thousands of suspended pipes that hold its inhabitants in a rusty sky. A network of mysterious cables suspends the pipes, which are connected by a briskly zipping system of cable cars at the top floors and a labyrinth of rotted walkways at the lower-floor slums. Each letter of Hollywood sways from its own cable, and above it, “Welcome to Los Angeles” beams at the in-pour of rush-hour planes. And all around him, the pipes gleam reddish beneath a reddish sun.

The young A rises into the Los Angeles sky and becomes the Average Joe hero. He stands in the insta-lift shooting away from the earth, and before the last page, he defeats the implausibly gladiatorial chemists, neutralizes their future sins, and falls innocently, chivalrously, in love with a futuristic gal who may or may not be destined for his great-grandson.

Older A ends his long-winded reverie, musing: “And I’ve always wondered, Where did this city come from? What inspired you? I always guessed the Hanging Gardens of Babylon. Was that it? Were you a history buff?”

He smiles and nods.

A beams at his own insight. “Told you,” he whispers to B and pockets the twenty his companion slips reluctantly from his briefcase.

How Berlin Reckons with Its Past Each and Every Day 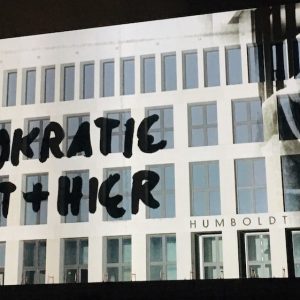 How Berlin Reckons with Its Past Each and Every Day Outside Nordbahnhof station, where Bernauer Straße rises up the hill between the districts of Mitte and Wedding, there is a grassy...
© LitHub
Back to top