"The tricky thing about hope is to not confuse it with optimism."

I own a painting of a black swan by the artist Selene Perez of Creativity Explored, which I love because it’s a powerful painting of a bird that looks crowded by the paper it’s on—it looks as though it wants to straighten its neck and spread its wings to escape. I also love it because I believe devoutly in the sheer unpredictability of the future, and a black swan has often been an emblem for that. Or more precisely, “black swan” is a term for something rare but consequential that may look obvious in retrospect but comes as a surprise at the time it happens.

The planes flying into the Twin Towers on 9/11. The Berlin Wall falling a dozen years before. On the other hand, nuclear meltdowns, pandemics, catastrophic floods and fires were all foreseeable, even if those in charge didn’t prepare for them or prevent them. Donald Trump is essentially a 747 jet made out of lard and lies that flew into the tower of false confidence we had built up in this country. Even if some of us were clenched in horror as we saw him approach, a lot of other people were blindsided.

He wasn’t really a black swan because everyone saw him coming; it’s just that a lot of people didn’t think he’d finish the journey. If you’re blindsided by climate disasters or Republican corruption, it’s not because they’re black swans; it’s just that you ignored the evidence. A pandemic like this had long been predicted. The nuclear catastrophe at Chernobyl was waiting to happen, thanks to bad design and bad maintenance protocol. One huge problem with human beings in general, but particularly those who suffer from overconfidence, especially because they think they’re in charge, is that we tend to dismiss the unlikely and prepare for what we think of as the likely, even as we live out a history full of black swans and unlikelihoods.

When I went to Japan a year after the massive earthquake, tsunami, and nuclear catastrophe there, a resident told me that the black wall of water about seventy feet high was unbelievable, even as he was seeing it come at him. We tend to write out the things we’ve taught ourselves are unbelievable and impossible, and sometimes that exclusion is even written into the software: a few decades ago, the NASA computer measuring the hole in the ozone layer over Antarctica rejected the incoming data because it was so much more extreme than the parameters that had been established. There’s a happy medium, as anyone who’s convinced a child that there is not actually a monster under the bed knows, and also sometimes there are monsters under the bed. Or seventy-foot waves coming at you. Climate change is one long assault on what we think of as predictable, or rather our expectation that the future will be like the recent past. It won’t.

A friend circulated the New York Times “presidential forecast” from October 18, 2016, giving Hillary Clinton a 91 percent chance of winning. Part of what made me tense with horror all through the month before that election was how many people thought 91 percent was as good as 100 percent. A lot of people confident she was going to win anyway stayed home or moved right on to fighting her as though she had already. It was as though one bullet in the cylinder was pretty much the same as no bullets. I hang out with doctors and I’ve had a medical adventure or two, so I know that a 9 percent chance of contracting something is taken seriously in the medical world. The US was in a high risk group that season, high risk of contracting Trump.

“Black swan” is a term for something rare but consequential that may look obvious in retrospect but comes as a surprise at the time it happens.

The odds for Kamala Harris and Joe Biden winning this election look increasingly good—the last poll I looked at also gave them a 91 percent chance of winning—and there’s definitely a chance for a blowout and a landslide. But there’s also a danger of people becoming so confident they’ll sit back and wait for it to happen. Of course there’s the second problem of whether Trump will so sabotage and undermine a free and fair election and a peaceful transition of power that it will amount to a coup attempt. (Fun detail, in her hearing earlier this week, Supreme Court nominee Amy Coney Barrett couldn’t commit herself to the peaceful transition of power that’s in the Constitution.)

It will remain only an attempt if, again we don’t sit back and assume it’s inevitable; coup attempts often do fail, if people resist. And this is the funny thing about people who don’t want to be bothered: they’ll assume that a given outcome is inevitable, as in requires nothing from them, and then when something else happens instead, they’ll assert that that too was inevitable, and had nothing to do with their doing nothing.

But the future is the unwritten pages of the history book, the pages we are writing with our actions in the present. And in a moment like this, there’s a delicate balancing act between too much confidence in the desired outcome and too much defeatism that it could ever happen; both lead to inaction when action is required to bring it about. Black swans seem good to keep in mind as we approach this election. The outcome we want seems likely, but nothing is guaranteed, and much of it depends on what we do in these next few weeks.

In my work on hope I’ve often focused on the welcome black swans: for example, the way Standing Rock became, from the starting point of a few people taking a stand, a huge event for climate justice, Native American visibility and rights, an inspiration to Indigenous and to non-Indigenous people, and an instigation to Alexandria Ocasio-Cortez to run for office when her chances looked very slim and most experts and insiders would have advised her against even trying. She is the loveliest of black swans. But not all black swans are on your side. We’ve been in a black swan bad dream come true for four years.

The tricky thing about hope is to not confuse it with optimism. Optimism is confidence that you know the future and it requires nothing of you. It’s a mirror image of pessimism, which likewise assumes it knows the future, only pessimism’s future is dismal and not up to us either. Hope is a sense of possibility within the uncertainty of a future that does not yet exist, but that we are making by our actions (and yeah, those we loathe and oppose are making by theirs: case study, the ramming through of Amy Coney Barrett’s supreme court nomination and all that voter suppression).

Hope is a sense of possibility within the uncertainty of a future that does not yet exist, but that we are making by our actions.

The future needs us. It needs us in the present to choose through powerful action the best version, rather than allowing the worst to overtake us. We act as though the future is predictable, as though it travels in easily measured increments that don’t startle us, as though all the swans that fly across our sky are white. But black swans happen. Which is why I’ve modified the slogan, hope for the best, prepare for the worst to: Hope and work for the best (and also be prepared to wrestle with the worst if it arises). You have to believe in the worst to diminish its chances of coming to pass. Maybe this time around we believe it because to some degree we’ve lived it.

If I’m hopeful in this election, it’s because I see people all over this country working hard to write the next chapter of this country’s history. Not necessarily because they think Biden and Harris are our saviors or the best thing they can imagine or even who they backed in the primary, but because they know that the difference matters. And that the worst is also sometimes what happens. That’s not a hopeful thought but it can drive the action that leads us toward our hopes. 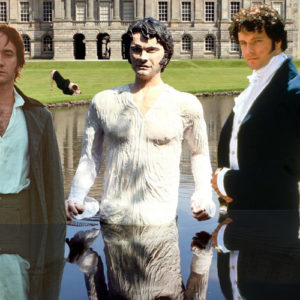 Every Mr. Darcy* Ranked Lords and ladies, today is the 25th anniversary of the day Mr. Darcy first came out of the lake on the BBC adaptation of Pride...
© LitHub
Back to top