When We Talk About "Surviving," Who is "We"?

Today is the thousandth day of the Trump Era, and sometimes it feels like the thousandth year. It’s the thousandth day since that drizzly inauguration made most memorable by the lies about the crowd size and Melania Trump’s face collapsing in undisguised misery. A thousand days is forever, and not even three years, and too long and maybe far enough up this mountain of filth to see beyond it. On this day as on every day since the summer of 2016, I will have informational hypervigilance, which means scrolling through all my main news sites and the journalists I follow on Twitter, maybe while listening to the radio or a podcast, sometimes to see what exploded since I last looked a few minutes or an hour before, and maybe chatting a bit with the smartest observers of all this I know.

Early in the Trump Era journalists would tweet: “I went out to lunch; WHAT HAPPENED?!?” Stuff exploded fast and out of the blue in what seemed like all day every day. If I have nostalgia for the Obama era, it’s in no small part for unsurprising news you could catch up on easily if you’d been off the grid for a week or two. In the current state of things, I’ve had that experience in which just an afternoon away from the Internet means coming home to a cascade of news about corruptions that lead to personnel changes, investigations, outcries, basically the country or the world a different shape than when I went out for errands. Journalists have been a great bulwark of defense against this administration, and often the legal consequences follow the journalists, when there are legal consequences; the judicial branch of government has been another, overruling and suspending and declaring illegal or unconstitutional measure after measure the administration has put forth. But the Republican majority in the senate has thus far stood like a Praetorian Guard, to keep the law from reaching their emperor.

Really what I was hoping for—and only occasionally found—in this endless trawling and roving was someone to make sense of the senselessness, to find the pattern and then the key that would somehow let me make order out of the chaos, with a sense that if we had the key and the map maybe we had the exit. There was a period when I drew charts, because if you looked at a kingpin like Manafort and traced all the moving parts you had something to hang onto. There was order in understanding who the low-grade mobsters in the White House were and who they served. But there are days when the federal government seems to be exploding, like a decaying body that fills with swamp gas, or like the scene where the alien rips its way out of the astronaut’s torso: a firing, an act of brutality like abandoning the Kurds, a new piece of corruption revealed, another backroom deal, another official revealed to be a crook, another attack, sometimes half a dozen or more stories in a day. And a map of an explosion is not so useful since the parts keep flying.

Take last Friday when the US joined Russia in refusing to condemn Turkey’s attack on the Kurds, who Trump had suddenly abandoned to the benefit of the authoritarian leaders of Syria, Turkey, and Russia, on the same day we heard about troops being sent to Saudi Arabia to basically guard oil, as the former ambassador to Ukraine testified she was fired abruptly for not complying with the corruption, while the New York Times editorial board ran a somber condemnation of the pending withdrawal from the Open Skies treaty that let us monitor Russian weapons (and them to monitor us), as we also learned in the exploding Ukrainegate matter that Rudy Giuliani had been in an Oval Office meeting where he lobbied for a jailed client in one of the apparently many times Trump’s friend tried to bend US foreign policy to his personal agenda, and the acting—unconfirmed—head of Homeland Security resigned, the fourth to hold that position in the past thousand days.

If we are not currently an authoritarian nation it’s thanks in part to the insubordinate spirit of a good deal of the American public.

The night before at his rally, Trump had spewed lies and hate and urged the crowd to hate on local politician Ilhan Omar in particular—claiming, among other things, that she married her brother and empathized with ISIS—and to hate Somali-Americans and refugees in general. This incitement of hate through lies was so ordinary it wasn’t news, let alone a scandal, because a scandal is a sudden interruption of the norm and this is the norm. “Don’t normalize” was a constant reminder early in the Age of Trump, but we have, because outrage is about the aberrant, and the stupidity, venality, dishonesty, and viciousness are not aberrant in this administration.

Little things like the secretive dealings of the president’s son-in-law, who should never have had security clearance, who has overt conflicts of interest in his dealings with Saudi Arabia and other regimes, who seems to have cuddled up to the Saudi prince after the latter ordered the dismemberment of journalist Jamal Khashoggi, and who just before these thousand days tried to set up a private hotline to Russia, only seem little because they are so many of them. Any one of the items in that last sentence’s list is worse than the worst scandals of most other administrations.

It has been a thousand days, and I will not say anything cheerful like, “We survived,” because the only “we” worth uttering includes refugee children in baby gulags and refugees turned back at the border and all the brown and black women in politics Trump has threatened directly and encouraged others to threaten and the farmers going bust in the Midwest and all the women around the world who lost access to reproductive care as part of the right’s anti-abortion agenda and the trans people under constant rhetorical and sometimes literal attack and the 22 murdered in El Paso by a Trump-inspired anti-immigration man with a gun. A we that includes the administrators and experts driven out of their jobs as the Department of the Interior, the federal science programs, the state department, and the diplomatic corps were dismantled or corrupted.

Survival is a low threshhold, and it’s not the same thing as thriving. There has been a lot of pain and grief and horror and fear and dismay even on the part of those not directly threatened, on behalf of who and what is. Which is not to suggest that being distressed deserves the lion’s share of empathy, only that it is a good sign, or rather a sign of goodness. That distress is the sign of a public spiritedness, a sense of connection, a sense that what impacts others matters to the hearts and souls of a lot of people. The opposite, which we also see, is people so oblivious or indifferent that they are unaffected by the assaults on the climate, the environment, the vulnerable, the constitution, and the functionality of crucial institutions in this country.

“Do not obey in advance. Much of the power of authoritarianism is freely given. In times like these, individuals think ahead about what a more repressive government will want, and then start to do it without being asked.”

There’s a pain in cognitive dissonance for most of us, a festering indignation about the things we know aren’t true, aren’t right, aren’t decent. For example, while Trump—in that Minneapolis rally—boasted about defeating ISIS he was laying the groundwork for their resurgence with his decision to abandon the alliance with the Kurds, a decision that only makes sense if you recognize he’s acting in the interests of Erdogan, Assad, and Assad’s backer Putin, and not yours or mine or the Kurds.

Though the important thing for those who are grieved is to do something about it, and millions have. We have not survived, all of us, but so many of us have resisted. My greatest fear after the election was that we who opposed and objected might be few and easily picked off; that opposition would be intimidated, that the coup would be enforced as it would have been in truly authoritarian nations. Timothy Snyder had warned us early in the Trump Era, “Do not obey in advance. Much of the power of authoritarianism is freely given. In times like these, individuals think ahead about what a more repressive government will want, and then start to do it without being asked.”

If we are not currently an authoritarian nation it’s thanks in part to the insubordinate spirit of a good deal of the American public and the underlying confidence behind this relative fearlessness. Those who attack the president directly on Twitter know that it probably won’t mean that they will be disappeared in the middle of the night as they might in other regimes (though they might get beat up at Trump rallies, or driven off social media).

The active resistance that produced the blue wave of 2018’s extraordinary election victories, that’s stood strong against the fossil-fuel industry, protested corruption, demanded accountability. There should have been more, because these thousand days have been the worst domestic emergency in this country since the Civil War, but there was a lot. It began with two remarkable events, the well-planned women’s marches in cities, towns, and villages all over the country on day two of the Trump regime and the utterly spontaneous reaction at airports all over the country the following weekend to the Muslim Ban.

My fear now is that people are getting tired and worn out. I am a person who the very moment I’m on the threshold of arrival often feels like giving up or assumes I’m lost and checks the directions. I worry that people are fading out or growing defeatist as redemptive possibilities draw near. It is, after these thousand days that felt like a thousand years, sometimes hard to imagine a return to a moderately ethical administration headed by an intelligent, informed head of state who can read a multipage briefing statement and who won’t spew playground insults on social media. But impeachment proceedings are underway at last, and the betrayal of the Kurds seems to have peeled away some of the support of Republicans and even if the base is tripling down, a majority of Americans want the president impeached and removed, according to the latest Gallup poll. Whether the Trump era ends because we elect someone else in 2020 or because of impeachment or resignation to avoid impeachment a la Richard Nixon, the end is in sight. If we stick with it. We have 384 days to go until the next election, and what happens in those days is both utterly unpredictable and partly up to us.

Tim O'Brien: Where is Our Allegiance to the “Toneless Dead”? 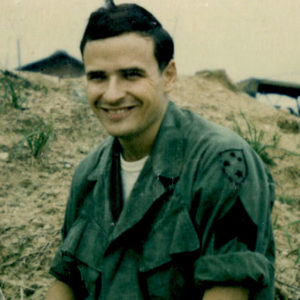 Tim O'Brien: Where is Our Allegiance to the “Toneless Dead”? Except for my family and a couple of close friends, I am most at home and most wholly happy in the company of former members...
© LitHub
Back to top