Reading Women Close Out the
Month on Cross-Cultural Dualities

This week, to close out their month on cross-cultural dualities, Kendra Winchester and Sumaiyya Naseem discuss the books The Sleepwalker’s Guide to Dancing and Our Women on the Ground

On The Sleepwalker’s Guide to Dancing:

She’s at a really difficult point in her life. I won’t say why because of spoilers, but she’s going through a lot. She’s a photographer. She finds herself being a wedding photographer because she just is at a rough place in her career, and this is how she can make money. She goes home, and she reconnects with her parents and with her culture. Different things happen, and there are things in the family’s past that they haven’t really ever addressed or talked about. She finds more of herself and who she is by going back home.

To me, this was really refreshing because I feel like oftentimes there is this narrative that you have to leave your family to discover who you are. That’s only for some people, as opposed to other people, who return back home and discover who they are, which is really interesting to see in a novel like this.

Sumaiyya Naseem: Yeah. I felt like the relationship that she has with her parents, it’s done so beautifully, especially the relationship that she has with her father. One thing that I notice often in immigrant narratives is how the people who move to the new country, which is often the parents, they are there to build a new life. They work hard, and they have to survive in this new place. But the children who come after the first generation, they come into the settled life where they have the space to pursue their passions. They may not be facing the same pressures to survive because their parents have already done it for them in a way, so I feel like that journey that Amina is going through is also a journey of self-actualization because this is also reflected in how she is able to pursue a passion.

Kendra: I think there’s a lot of discussion about her parents moving to the United States and how her mother didn’t want to move the United States. I saw a post somewhere the other day talking about how feeling restless in your very safe, comfortable environment where you do have the ability to pursue your passion and feeling uncomfortable and wanting to leave is a privilege in of itself because a lot of immigrant parents moved to different countries to try to provide that for their children. So their children have a privilege that the parents did not have, per say, and I thought that this was so interesting because her dad moved away to become a brain surgeon, which wasn’t available to him in India. And then Amina is a photographer, this artist, and does all these things, and just seeing that dynamic of the pressure that she received to do well because their parents sacrificed so much, but wanting to pursue art. It was really interesting dynamic that I really appreciate seeing on the page.

Sumaiyya: Definitely, and that is something that tends to happen in immigrant families, I’ve noticed. The same case is with my family. My parents, you know, they worked hard all their life. They struggled so much to give us a stable environment, and that environment has allowed us to pursue our passions and to pursue what our heart desires as opposed to looking for a job that pays the bills that adds to that stability. So Amina is definitely also beginning this process of self-actualization in a way because she, especially with her photography career, she is in a moment of crisis. I found that intriguing that she is internally conflicted about her photography because of this one particular picture. It’s amazing to me how about one moment can change so much in her life.

On Our Women on the Ground:

Sumaiyya: In the introduction, the editor of this anthology, Zahra Hankir, basically writes about the multiple levels on which Arab women are misunderstood and the challenges that they face simply by being women who are reporting in the Middle East. The one section in this introduction that stands out to me is when she writes the following: “Arab women are indeed misunderstood on multiple levels and by multiple groups. On one hand, an Arab women may be victimized or pitied by outsiders who think her to be ‘submissive,’ ‘oppressed,’ or ‘subjugated.’ She is occasionally boxed into one identity whereby for example her Arab identity is (incorrectly) conflated with a Muslim one. And she is frequently exoticized or superficially celebrated. On the other hand, an outspoken Arab women is sometimes deemed improper, or an anomaly, by both outsiders and the society around her. Professionally, she might be considered less of a ‘threat’ than her male peers or not taken seriously. And she is sometimes actively silenced or passively unheard.” So that’s where the quote ends. I feel like this is such a powerful observation about the struggles or the challenges that are faced by these sahafiyats, which is a word for Arab women reporters or women reporters.

Kendra: I feel like it really encapsulates a lot of the stereotypes and the preconceived notions that people have about Arab women—and how she pointed out that not all Arab women are Muslim, as well, and how people falsely conflate those two identities. I thought that was just such an important point to make because we all like to throw Arab women all in one basket, as it were. And we don’t notice—let alone celebrate—the diversity, the wonderful diversity that is there, that is represented so well in this collection.

Sumaiyya: Definitely. Because we do have this major stereotype that anyone who is an Arab woman is a Muslim.

To listen to the rest of the episode, as well as the whole archive of Reading Women, subscribe and listen on iTunes or wherever else you find your favorite podcasts. 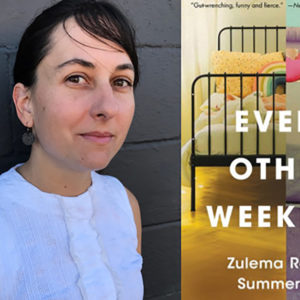 Zulema Renee Summerfield is the guest. Her debut novel, Every Other Weekend, is available in trade paperback from Back Bay Books....
© LitHub
Back to top