Reading the Travelogues of Percy Fawcett, Explorer of the Lost City of Z

A move to the West Riding of Yorkshire spared me the unhappiness of watching the river lose the last of its black funnels, but there were days when I was overcome with a tenderness for what I had left behind. I had been struck down by an incurable nervous disease characterized by a desire to return home.

The Oakwood Library became my sanctuary. Its grand drawing rooms, with picture rails and sunburst stucco ceilings, were lined with hardback books, fresh and stale, fat and thin, large and small. I roamed the shelves, following paths that fascinated me, and taking in the scent of wisdom. The hours flashed by in minutes as I sat on the ledge of the bay window absorbing the colourful stories of the dead. Cocooned in this place, I was able to divine the Atlantic from a grain of salt.

My father brought down a dog-eared book with soiled green cloth boards called Exploration Fawcett. It still had the remains of its dust jacket showing three men in a canoe confronting a giant snake. “You’ll enjoy this,” he whispered with that knowing voice and quiet smile that had made him such an inspiring and popular schoolmaster. “It’s about an explorer who vanished without a trace in the Amazon.”

The daunting librarian removed the borrowing cards from my books and thumped their flyleaves with her stamp. I handed over my pocketed library tickets and we walked down the garden path past the freshly mown lawn and out through the gateway. The blue lamp at the foot of Oakwood Lane and the clanging trams heading south to the city center told us that we had returned through the door in the wall. I was back in no-nonsense Leeds.

A parade of gabled shops with a branch of the Midland Bank, a confectionery and the fish and chip shop was on our left; further down Roundhay Road lay Gipton Wood, a murder scene where I had been told never to go. The Clock cinema, the Olga Sheard school for dancing, the Gaiety theatre known affectionately as “the bug house,” the “knocking shops” of tree-lined Spencer Place, and the regimented terraces of houses that stretched down from Harehills and Sheepscar to the Quarry Hill flats were more distant landmarks on the road in to town.

In bed that night I read about Lieutenant-Colonel Percy Fawcett, one of the very last heroic Victorian explorers.

On the other side of Roundhay Road beyond the market clock, where the broad-leaved chestnuts gave way to the Soldiers Field, we waited for the bus. On the stop–start ride through narrow tree-lined avenues I started to flip through Exploration Fawcett. On the inside cover locations such as “Veil of the Primeval,” “River of Evil” and “Poisoned Hell” were emblazoned on a map of South America. Near the beginning of the book was a photograph of an athletic, lightly bearded man wearing a long reefer jacket, waistcoat, tie and leggings, leaning nonchalantly against a veranda.

In bed that night I read about Lieutenant-Colonel Percy Fawcett, one of the very last heroic Victorian explorers who, for ten years, had trekked down death-filled rivers surveying stretches of disputed territory on the edges of Bolivia, Peru and Brazil. At the river port of Rurrenabaque he had watched a woman suckle a litter of pigs and at Santa Cruz de la Sierra in the tropical lowlands of Bolivia he learned of newborn children being fed to swine. He wrote that one night he had been awakened by a jaguar rubbing against his back as it slunk under his hammock.

Fawcett wrote that no imagination could conjure up a vision equal to the beauty of the reality. The Mato Grosso was irresistible, with its low whistling bird song and gorgeous butterflies. The monochrome photographs in the book depicted a lost world, but one that felt intensely familiar. A sketch of a drowning man being eaten by piranhas at the beginning of one chapter emphasized the dangers, while the line drawings of ruins and hieroglyphs raised my expectations of the discovery of an El Dorado.

It seemed as if Fawcett reveled in facing down death. On the Heath River he pacified a tribe of hostile forest-dwelling Indians by shouting a few words of Chunchoand then singing “On a Bicycle Built for Two” to the accompaniment of an accordion. In the Amazon valley he defeated the wrath of a fearsome bull by fixing it with his resolute steely gaze. One day, while paddling down the Rio Abuna, the menacing triangular head of an enormous anaconda rose out of the water. In an instant he reached for his rifle and fired a bullet into its undulating spine.

In the tributaries of the Tocantins basin he braved brown and yellow electric eels that could paralyze a man with a flick of their tail, and caught a glimpse of the jaws of a bull shark hidden in the muddy depths. Razor-toothed piranha that could sever a human finger even when they lay dying on the riverbank were a constant threat, and more frightening still was a little worm-like fish with a bony snout called the candiru that was attracted to human urine. Once inside the penis, barbs protruded from its body causing excruciating pain relieved only by surgical extraction of the fish from the urethral mucosa.

Fawcett also described cyanide-squirting millipedes, red hairy chiggers that devoured human flesh and leaf-cutting sauba ants that in no time could reduce a man’s clothes to rags. I had no reason to doubt the authenticity of his encounters with Bolivian double-nosed tiger hounds, snakes that snored, or the Milta, a large black creature, half-dog half-cat. At times it seemed as if even the forest flowers wanted him dead.

On his return home Fawcett reported at a meeting of the Royal Geographical Society that “monsters from the dawn of man’s existence” possibly still roamed the plateau of the Ricardo Franco hills, imprisoned and protected by the unscalable cliffs. He went on to tell his rapt audience that a trader friend whose honesty he could vouch for had told him of a huge reptile resembling a brontosaurus whose tracks were familiar to the Indians.

The ghost story’s untidy ending renewed my hope that a place with no way out might exist in the last great blank space in the world.

Nothing was known, everything was possible. Fawcett’s words reverberated deep inside me: “The forest in these solitudes is always full of voices, the soft whisperings of those who came before.”

Fawcett challenged me to travel with him to intangible worlds where everything was connected to everything else and the unfathomable was within reach. It was not only fabulous chimeric beasts that had escaped the eyes of naturalists but also tribes of aboriginals who lived underground:

At the time of the great cataclysm the Brazilian island was inhabited by an autochthonous race of Negroid troglodytes, dark skinned if not black, hairy, brutal and cannibalistic. Remnants of these people still exist in the remote parts of the interior and are greatly dreaded. They are known to the Portuguese as Morcegos or bats from their custom of hiding during the day and hunting by night. The Indians on the fringes of civilization call them Tatus, or armadillos, from their way of burrowing in the ground […]

The Morcegos have a very acute sense of smell, enabling them to hunt down men and animals with the greatest facility, and it may well be this that is responsible for the seemingly telepathic knowledge of a stranger’s presence.

And then in 1925 he had set off in search of a lost city, accompanied by his older son Jack and Jack’s friend Raleigh Rimell. He wrote home to say that the point where he would leave civilization was marked by a tower of stone that lay deep in Morcego territory.

He and his two young companions would never be seen again. The ghost story’s untidy ending renewed my hope that a place with no way out might exist in the last great blank space in the world. The story had helped me fall off the map.

The evenings that I spent reading Exploration Fawcett were as alive as any I can now remember. It was as if the book had chosen me, rather than the other way round. I had become party to Fawcett’s deepest thoughts and was convinced he was still alive. How else could he have written the book? 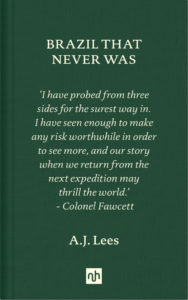 Extract from Brazil That Never Was by A.J. Lees (Notting Hill Editions).

Andrew Lees is a Professor of Neurology at the National Hospital, London. He is the recipient of numerous awards including the American Academy of Neurology Life Time Achievement Award, the Association of British Neurologist’s Medal, the Dingebauer Prize for outstanding research and the Gowers Medal. He is one of the three most highly cited Parkinson’s disease researchers in the world. He is the author of several books, including Ray of Hope, runner-up in the William Hill Sports Book of the Year and The Silent Plague.

How Halldór Laxness Brings the Heroic to the Everyday

How a Scrap of Papyrus Launched a Reconsideration of Early Christianity 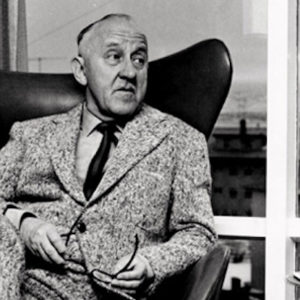 How Halldór Laxness Brings the Heroic to the Everyday

In the spring of 1927, the Icelandic novelist Halldór Laxness had reached a crisis point in his young life. He had begun...
© LitHub
Back to top
Loading Comments...