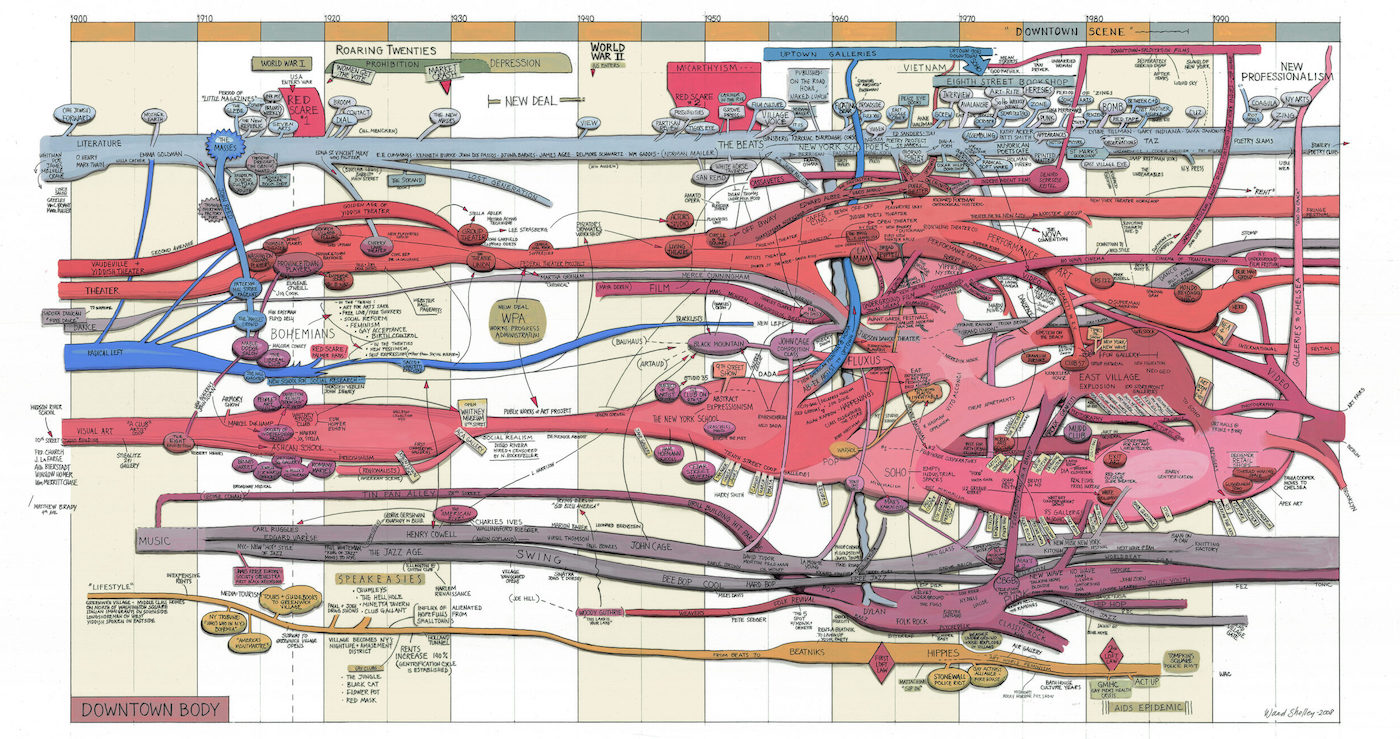 The following is from Decoding Manhattan: City of Diagrams, Maps, and Graphics by Antonis Antoniou and Steven Heller.

From a booklet of charming Manhattan maps, probably made for readers of The Sun, sections of the city as they looked in the late 19th century. 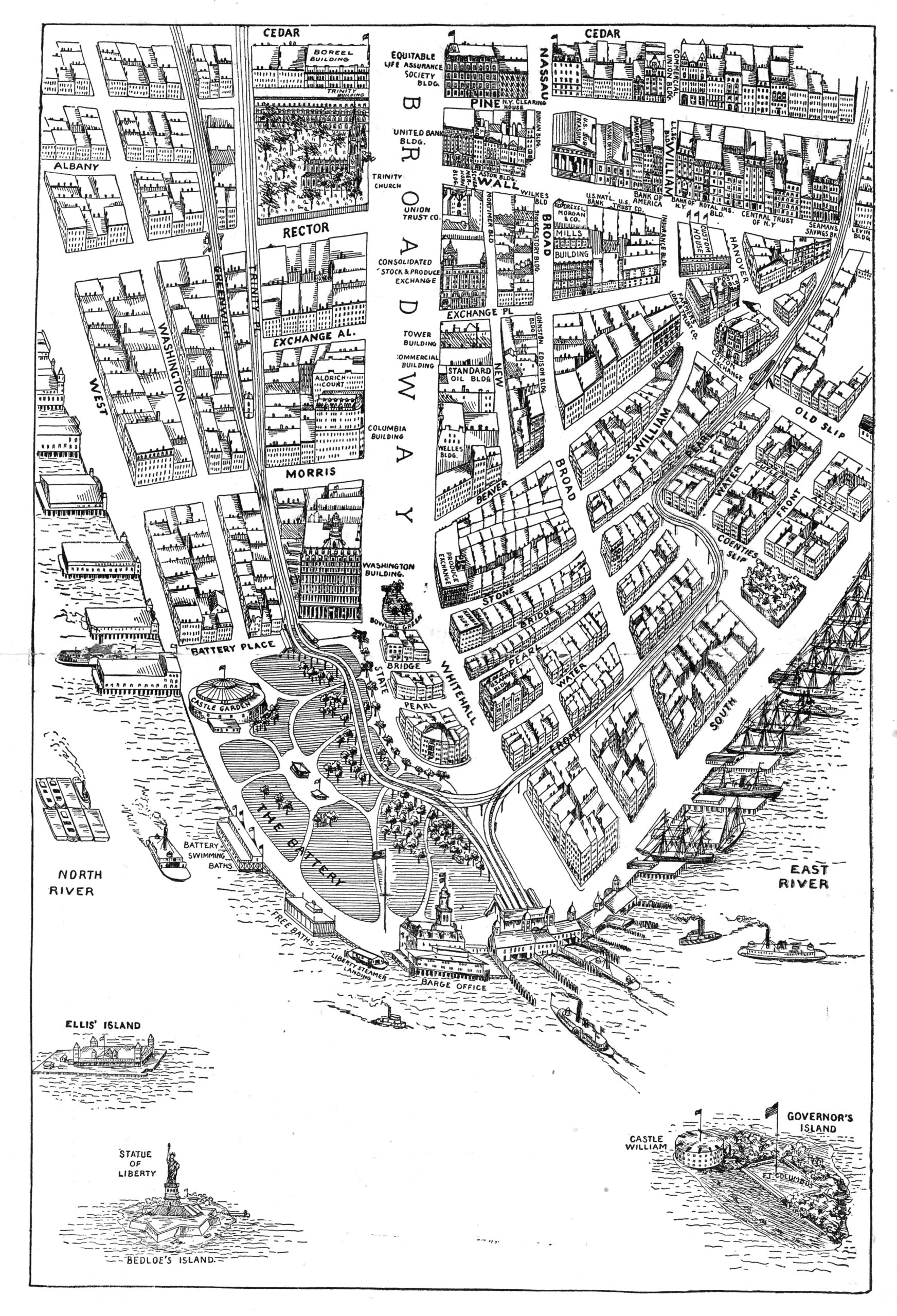 The story of New York’s Downtown-based avant-garde unfolds over a tumultuous century in a tour de force of narrative painting. “My paintings/drawings are attempts to use real information to depict our understandings of how things evolve and relate to one another,” Ward Shelley writes. “They are ‘wide-screen,’ with all [the]information available to the interacting eye at every moment.” 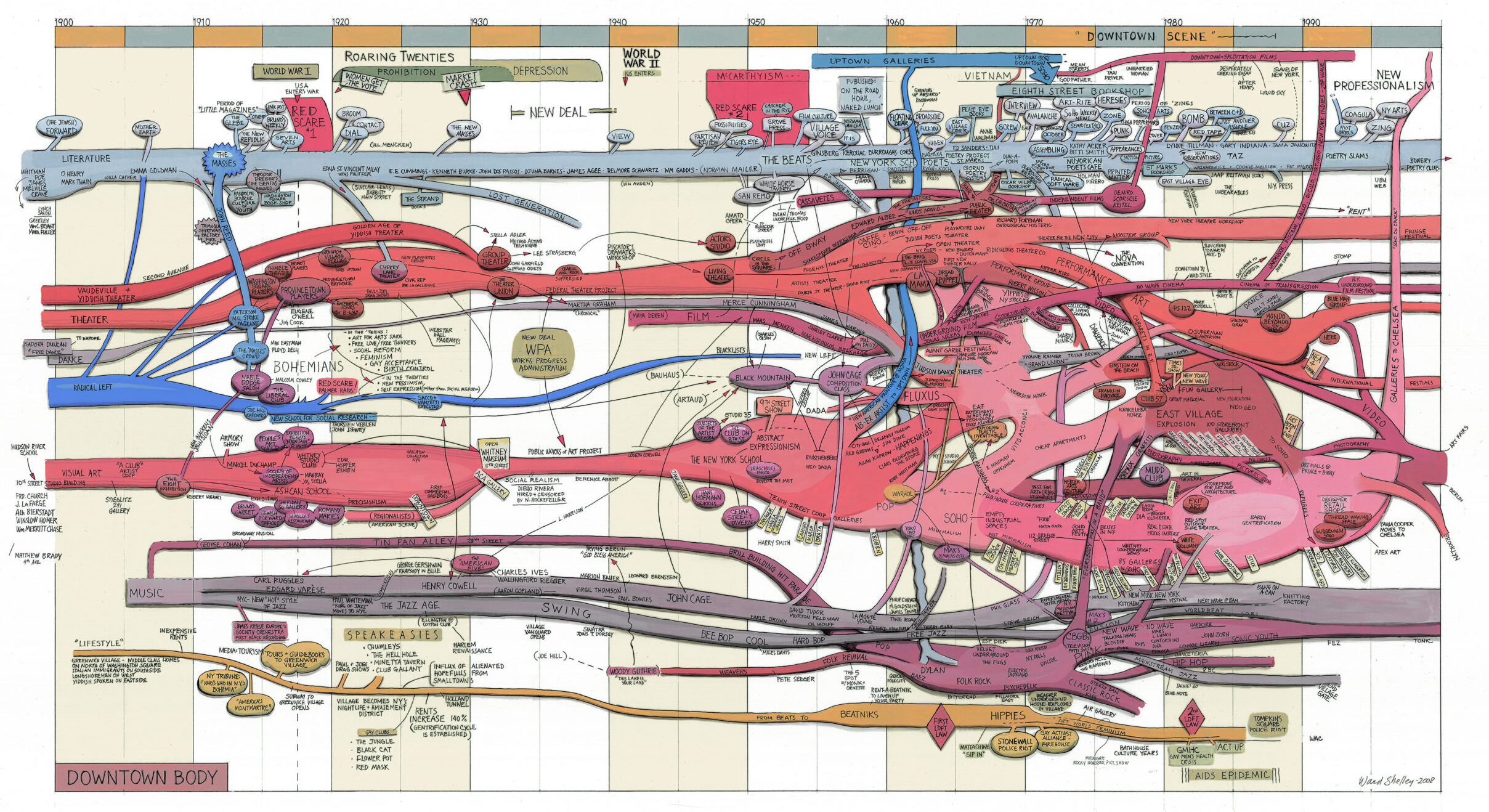 Intrepid journalist Nellie Bly’s 73-day trip around the world in 1889–1890 was inspired by Jules Verne’s Around the World in 80 Days and sponsored by Joseph Pulitzer’s New York World, which created a board game so that readers could experience it vicariously. A spiral timeline maps the places, means of transportation, setbacks, and events—like meeting Jules Verne in Amiens, France (see “9th day” on the squares)—of Bly’s real race against both the fictional Phileas Fogg and competing reporter Elizabeth Bisland of Cosmopolitan magazine. Manhattan and the Statue of Liberty stand at the center of this whirlwind adventure as symbols of a grand victory. 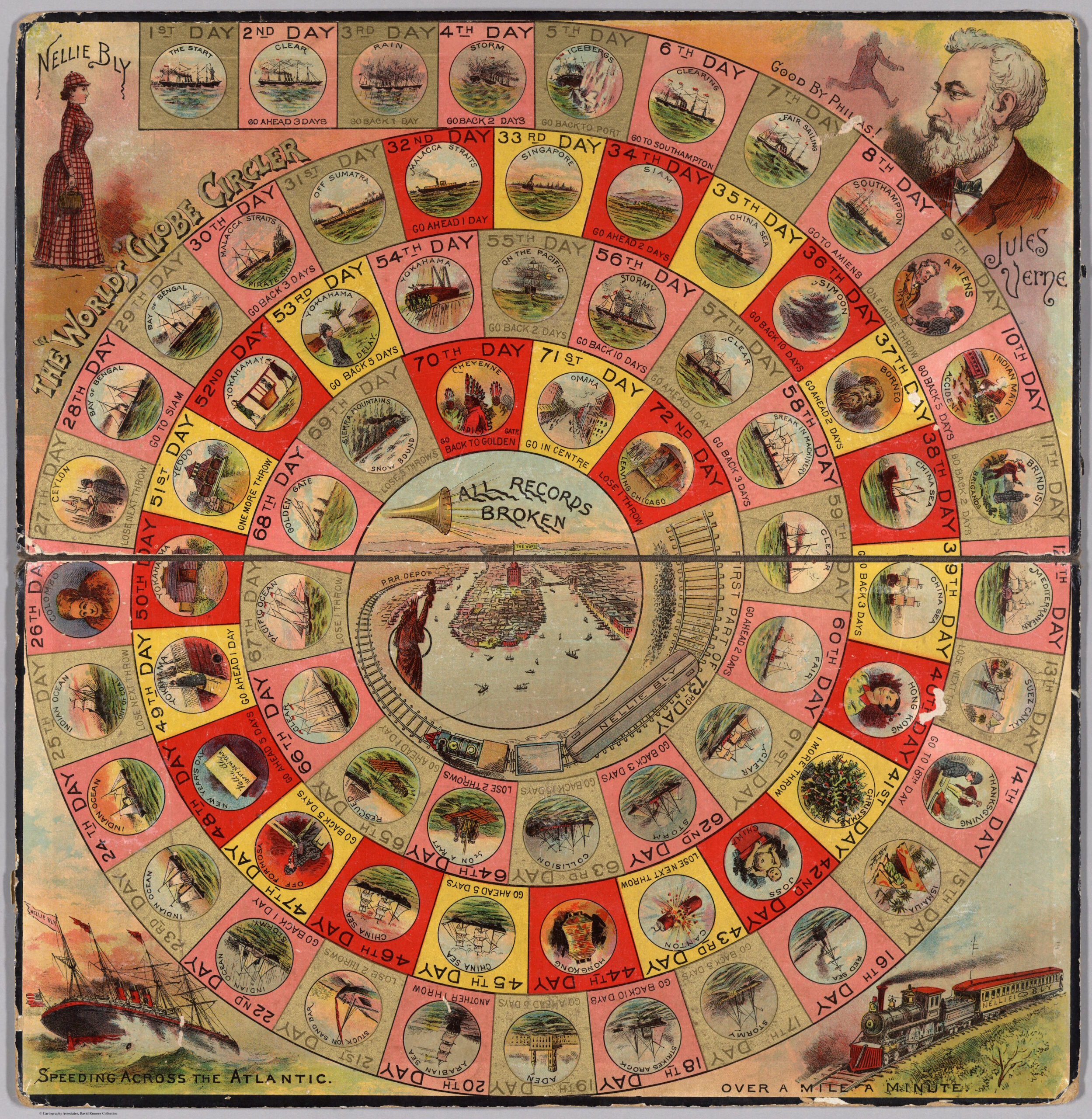 Renzo Picasso was a Genoese architect, engineer, inventor, urban enthusiast, dreamer, and planner, who was fascinated by urban transportation systems. A virtuoso draftsman, here he visualizes in elegant diagrams the then-under-construction Broad Street and Fulton Street stations of BMT Nassau line extension, which opened in 1931. Today, these stations are served by J and Z trains. 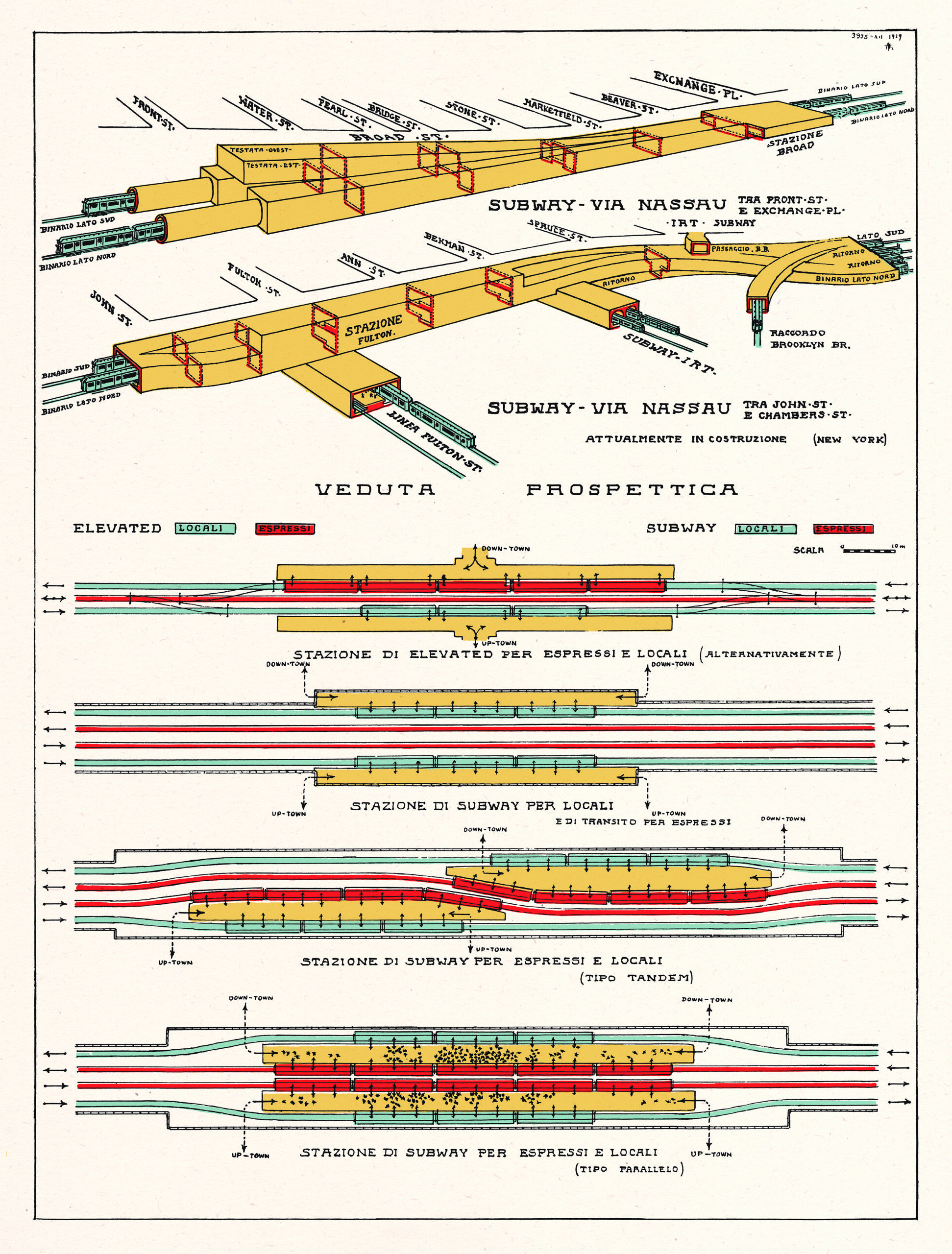 Here, for the middle-class readers of Frank Leslie’s Illustrated Newspaper, is a somber vision of urban life: A warehouse packed with poor families, with the lack of light and air and the inadequate sanitary facilities carefully documented in diagrams. For all that, the rooms in this tenement are filled with life and incident, suggesting the combination of attraction and revulsion with which the establishment press viewed the immigrant city. 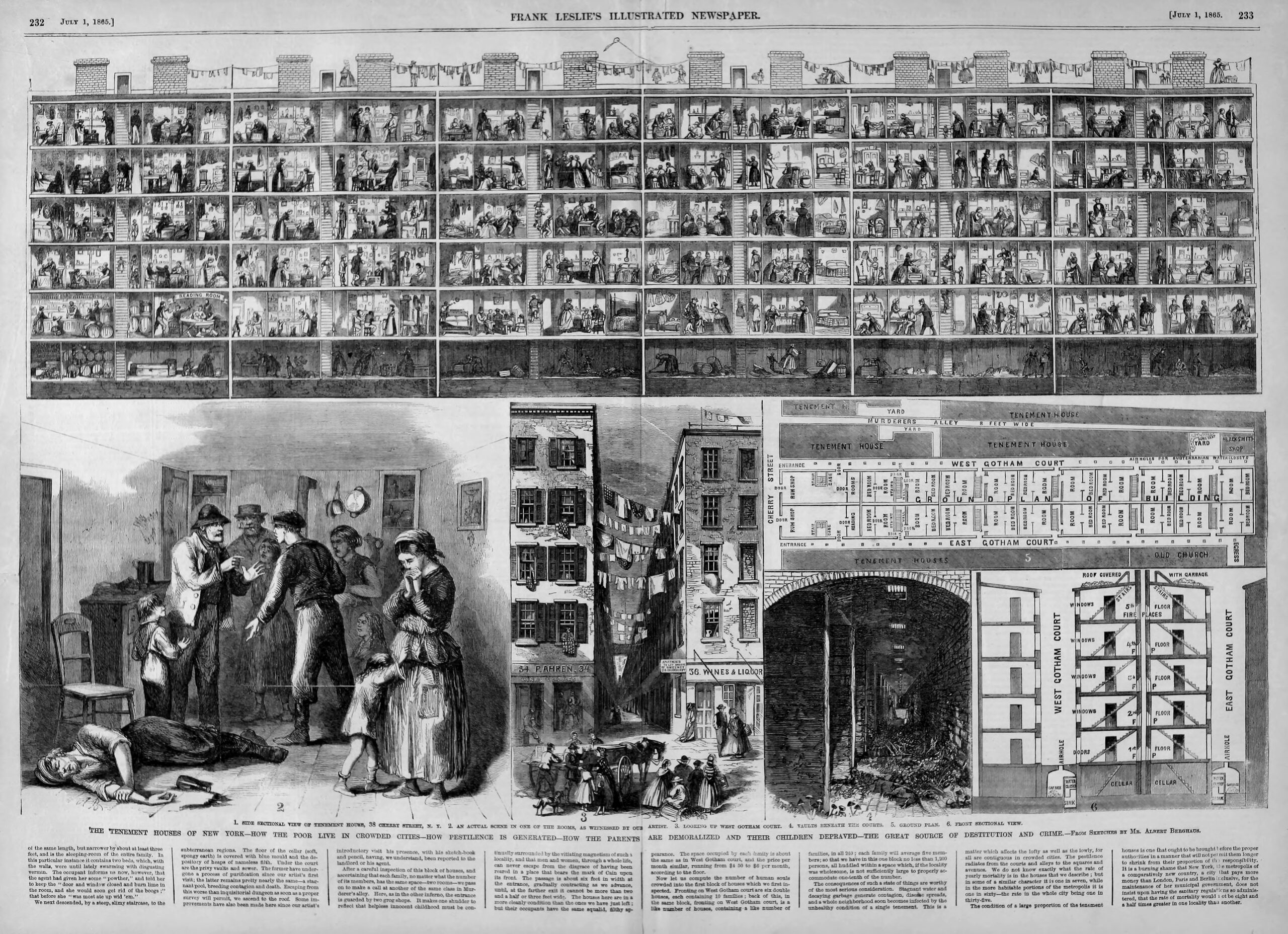 Steven Guarnaccia updates the traditional streetscape with an overhead view of the buildings along 53rd Street that captures a slice of Midtown with a large number of Manhattan’s more recognizable postwar skyscrapers. The axonometric projections are ideal for capturing the large bulk and unusual forms of the buildings, just as the elevations used for the New York Mail and Express project almost a century earlier suited the architecture of that era.

Leslie Roberts transposes color-coded names of street trees into a lyrical grid via complex coding systems, with an element of randomness mixed in. 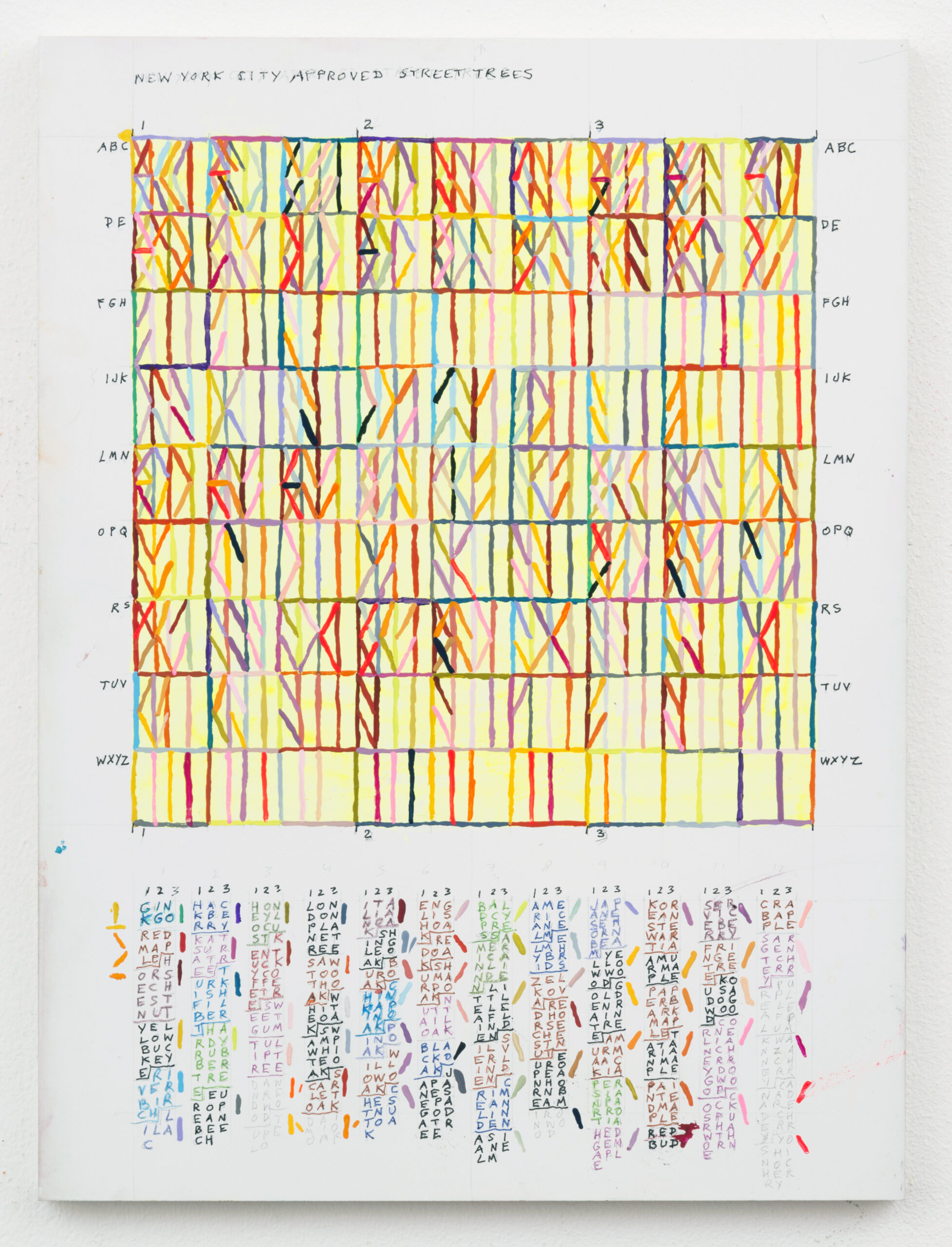 The skyscraper boom in Lower Manhattan around the turn of the century aroused conflicting sentiments in Manhattanites: If the dominant theme was pride in progress, there was also a distinct undercurrent of anxiety over the loss of the traditional cityscape, with its human scale. In 1905, the New York Times celebrated the survival of the venerable Trinity Church at the end of Wall Street, “in but not a part of the teeming world of dollars that surrounds it on every side.” Here, in Levering’s nightmare vision, the world of dollars has all but enveloped the old church: progress, finding an obstacle, flows around it. 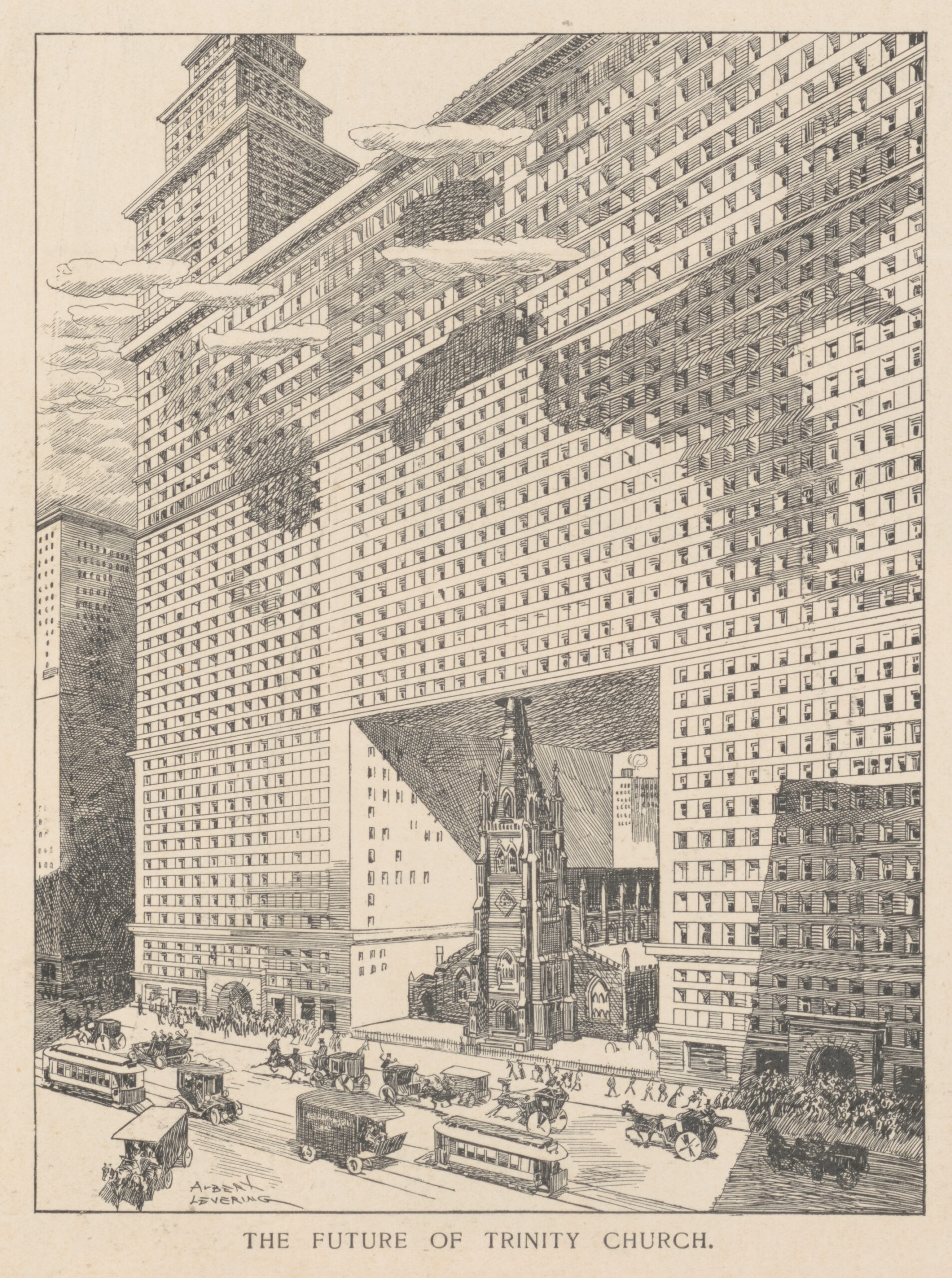 Albert Levering, The Future of Trinity Church, from Puck, March 6, 1907. Via Library of Congress.

Twice a year, members of an exclusive tribe of urban power brokers flex their muscles during fashion week. Don’t be deceived by the foibles of this squadron of wannabes—their ilk drives an industry. 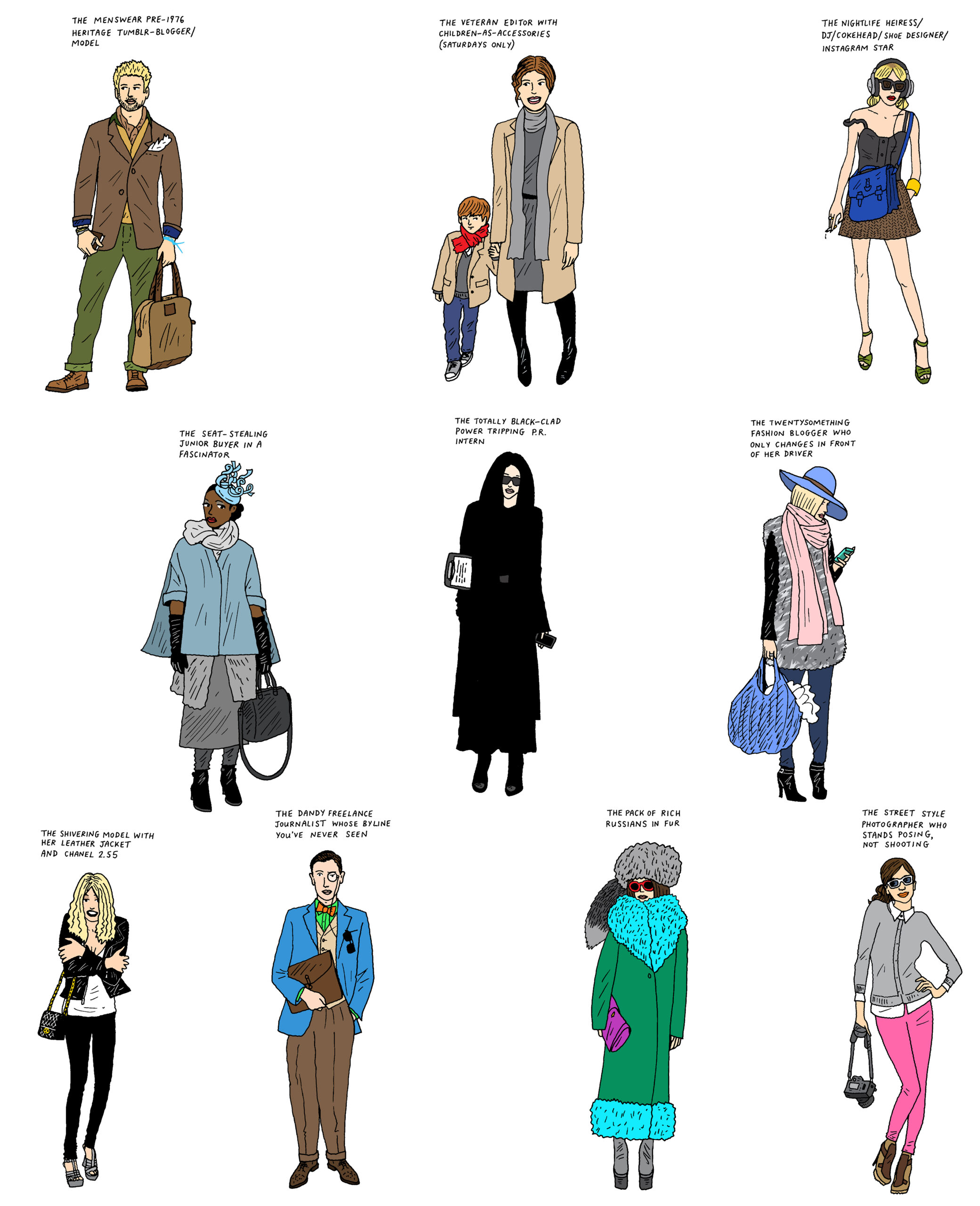 Reproduced on the cover of The New Yorker, December 4, 1995. Artist Maira Kalman celebrates the diversity of the city, uptown and down, with glancing associations between its inhabitants and their habitats. 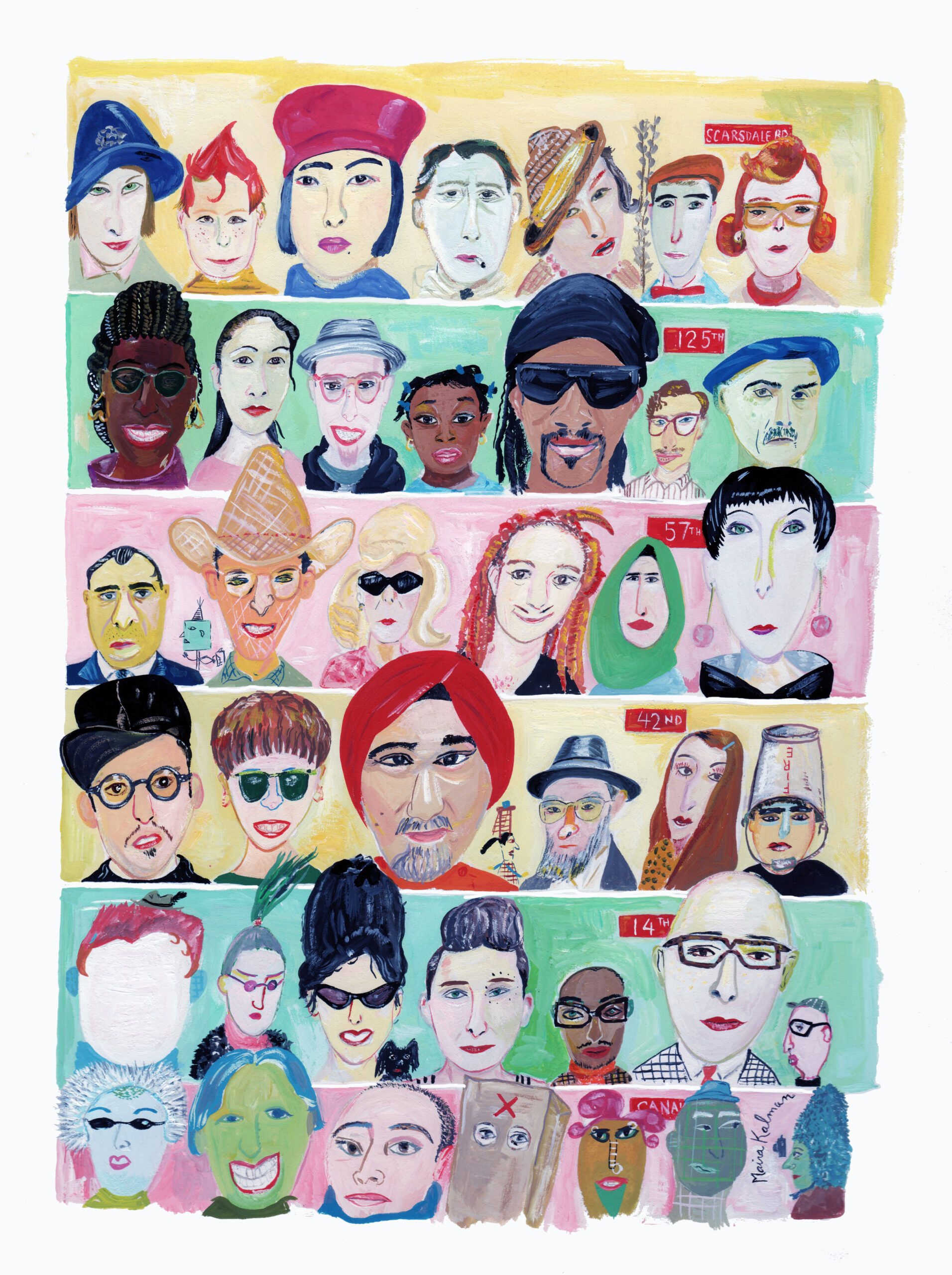 For street vendors, the city’s regulations can be incomprehensible. This guide, a foldout poster produced for the Street Vendor Project, a vendor advocacy group, offers an accessible pictorial rendition of the law in diagrams and multilingual texts. It was distributed for free to vendors to help educate, empower, and protect them. 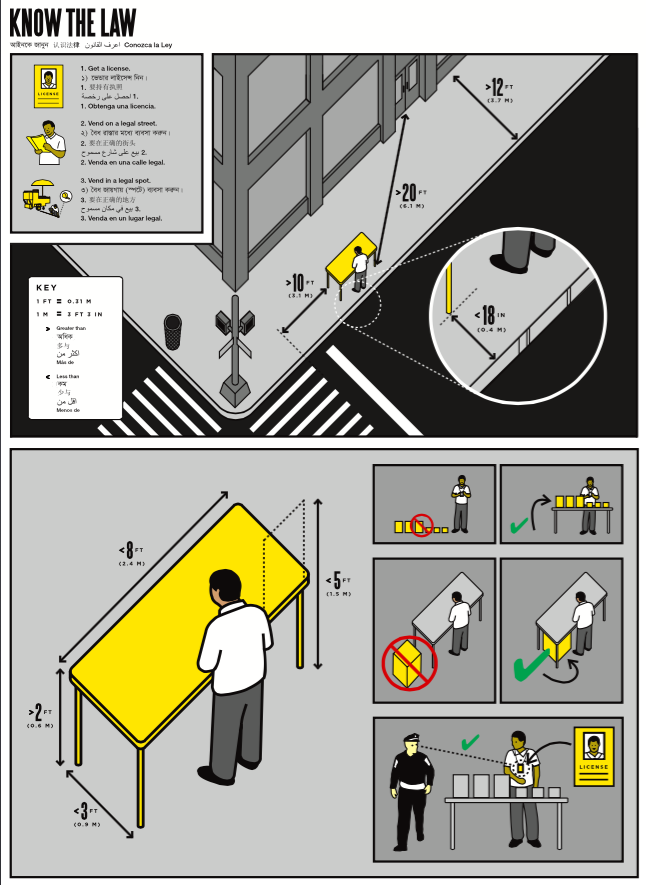 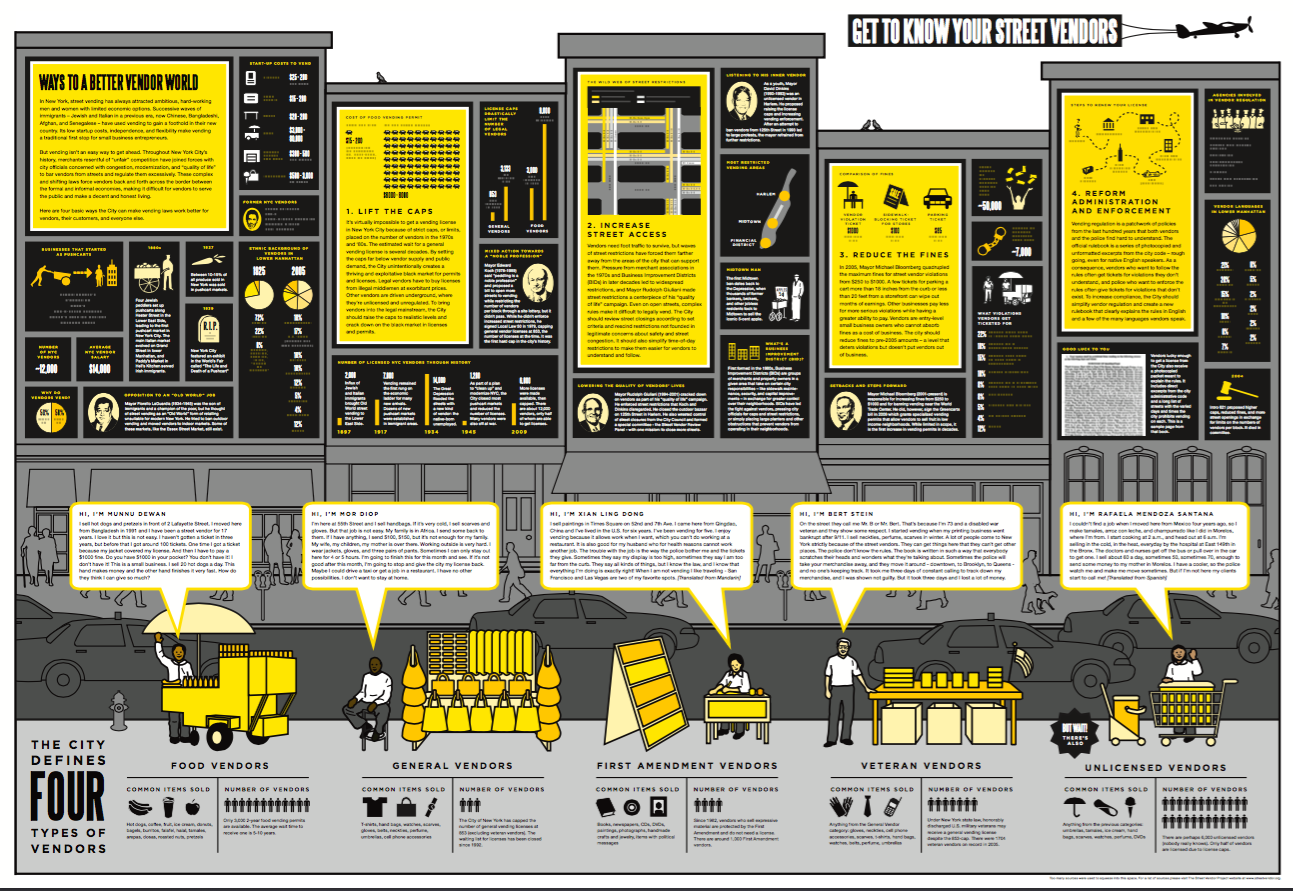 McCay enters a subway station in 1904, the year the system opened to the public, encounters subway advertising for the first time, and imagines a day in the near future when he will drown in hype. A tour de force of hand lettering ensues. McCay’s Spectrophone, which forecast the future in a series of cartoons, failed to predict another sort of phone: A century in the future, all of the advertising that tormented McCay, personalized for the recipient, would be compressible into a small, ubiquitous handheld device. 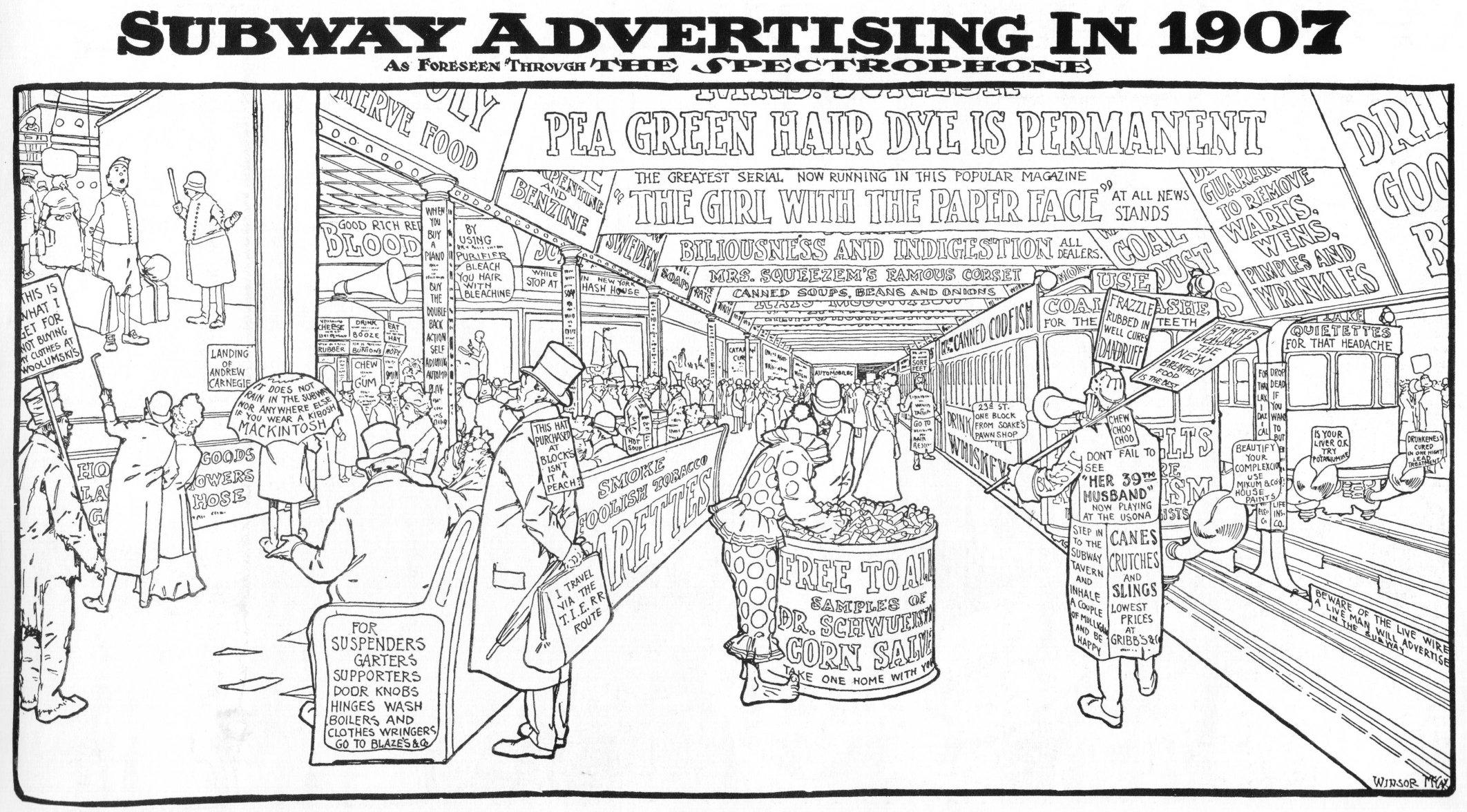 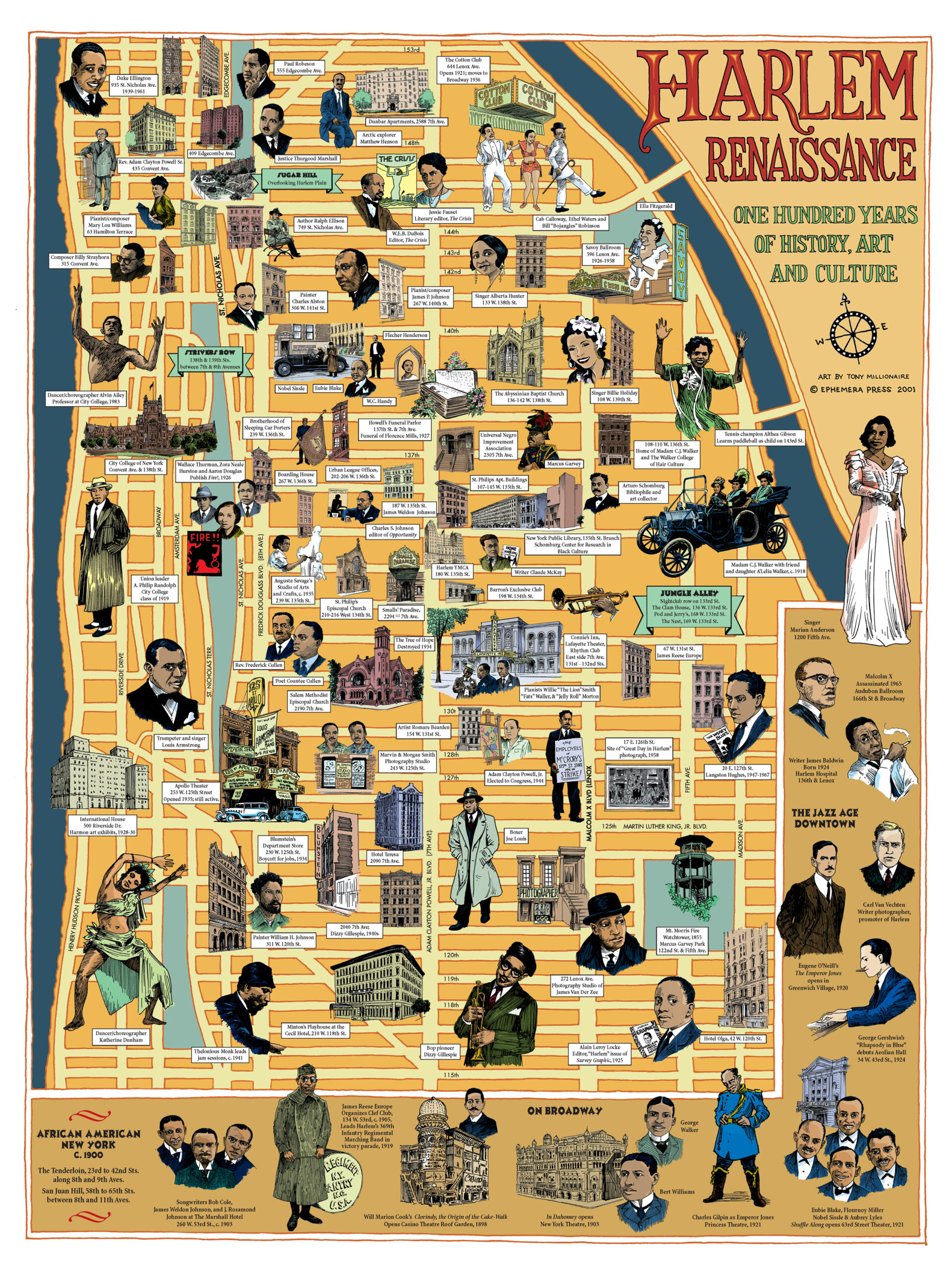 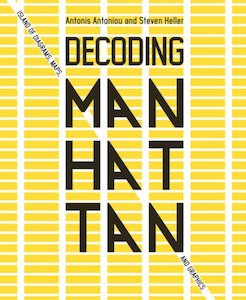 Antonis Antoniou is a designer and architect and the coauthor of A Map of the World: The World According to Illustrators and Storytellers (2013) and other visual books. He lives in Spain and Cyprus.Steven Heller is the author/editor of more than 180 books on design, illustration, and popular culture. He is the recipient of the Smithsonian National Design Award for Design Mind. He lives in New York City.

Why Should You Read?

Alexander Chee, Morgan Parker, and Emma Straub on the Life of a Writer in NYC 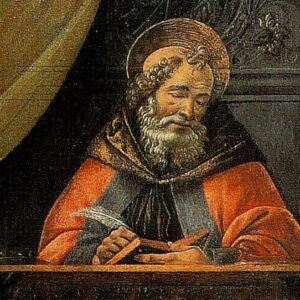 Why Should You Read? Featured image: “Saint Augustine Working in His Study,” Sandro Botticelli, c. 1492. The future St. Augustine’s account...
© LitHub
Back to top
Loading Comments...