Reading Feminist Futurism in the Age of the “Female” Virtual Assistant

Images of Empowerment in the Literary Cyborg

I often think about this joke from Twitter: Women are just better—that’s why our robots are women. Siri, Alexa. All you guys have is a shitbag named Craig with a creepy list. It didn’t make me laugh. Though I’d like to think that the rise of the “female” virtual assistant—Apple’s Siri, Amazon’s Alexa, Microsoft’s Cortana, the nameless female-voiced Google Assistant—is a sign of the gender-equality movement (like the Boy Scouts dropping “Boy” from their name), I can’t help but disagree with the tweet: It’s definitely not for the sake of feminism that these virtual assistants are so overwhelmingly gendered.

Increasingly, it seems more and more people are noticing that gendering virtual assistants achieves the opposite effect of empowering women and feminine bodies. Janna Avner suggests if people become accustomed to seeing (or hearing) “women” in this subservient role, people “may be consuming these stereotypes more than the service itself,” reinforcing societal ideas of the docile, humble, agreeable woman-as-assistant stereotypes “without seeking to critique or reassess them.” It is therefore not only disheartening, but dangerous, to continually interact with such obviously gendered virtual assistants without understanding the effects of such interactions. If people get into the habit of treating machines as women, how easy would it be to treat women and feminine-presenting people as machines?

Around the same time I was switching the voice of Siri on my iPhone to a man’s voice, I was taking a modernism class. These century-old poems were written long before the female virtual assistant moved into our pockets and computers and countertops and cars and lightbulbs and TVs, before the word robot had even been coined. Nevertheless, these technology-focused poems remind me of this same collapsing separation between feminine bodies and machines happening today.

In Jean Toomer’s poem “Her Lips are Copper Wire,” a male speaker suggests a relationship between femininity and machinery that reduces the woman to the sum of her parts. Toomer’s speaker compares the woman to industrial images, calling her breath “yellow globes,” her lips “copper wire,” and referencing several mechanical items—a “power-house,” “main wires”—alongside highly sexualized female body parts, like her tongue and mouth, creating an overt picture of technology as feminine and sexual.

Worse even than gendering machinery, the comparison establishes the woman as an object herself, not unlike a machine—and one entirely at the service of the male speaker, who spends the whole poem giving commands: “Whisper of yellow globes,” he says, and “with your tongue remove the tape / and press your lips to mine.” In this example of woman-as-machine, the humanity of the feminine body is lessened. Making her objectifiable, ownable, orderable—just like Siri or Alexa. It should not be surprising to me, recognizing the historic literary tradition of women being made more machine-like and turned into objects, but what is surprising is that such comparisons between Jean Toomer and Siri can even be made. Bright and shiny robot future, you have more in common with our ghosts than you’d like us to believe.

Having been similarly frustrated with some of my own romantic partners, I suspect most of Loy’s work is a reaction against the ideas of her douche-baggy ex, Marinetti, who founded Futurism.

Enter Mina Loy. She’s definitely not the feminist hero we need today, having heralded eugenics and several other forms of racism which should not be, and are not being, dismissed. In no way am I arguing she’s a feminist in the truest, most intersectional sense of the word and I’d never ask anyone else to. That said, her Futurist poems engage with this conflation of femininity and machinery in a way that moves me, almost, from despair into hope. When feminine bodies encounter and become machines in her work, it empowers, rather than abases, femininity. Siri and her friends could sure use some of that right about now.

Having been similarly frustrated with some of my own romantic partners, I suspect most of Loy’s work is a reaction against the ideas of her douche-baggy ex, Marinetti, who founded Futurism. Loy possesses intimate knowledge of Marinetti’s form of Futurism, which idealizes the machine and glorifies “scorn for women,” and, as a result, most of the Futurist characteristics in her own work clearly mocks the dude-bros of Futurism and their idea that the future is great but only for white guys.

Consider Loy’s long poem “Songs to Joannes,” which begins by describing, or addressing, her lover as “Spawn of Fantasies.” By stating that her lover “spawns” from an unreal, fantasy place—or, alternatively, that he is himself a creature (a “spawn”) from this unreal place—she intentionally highlights the established poetic tradition of viewing one’s lover as something less than, or apart from, human. She continues throughout to never see her lover’s humanity, either by seeing him only as body parts—calling him at times the “skin-sack” (II), the “hair” (II), the “eye” (VI), the “nervy hands” (XI), the “sweat” (XXVIII), but never a whole human—or sometimes again by likening him often to objects or animals—“Pig Cupid” (I)—and eventually, actual machines (II, XXV).

What makes her participation in this collapsing separation between human and machine more empowering than Toomer is that she reverses the stereotype by describing her male lover in the disembodied way that is usually reserved primarily for feminine bodies. She is reacting against Futurism as much as she is participating in it. For example, she calls Joannes “Something the shape of a man,” but then explains he is “More of a clock-work mechanism” (II). That gender reversal alone is revolutionary. A form of critique just by turning the machinic gaze around on the male. A way of breaking the feminine body out of the subservience by putting someone else (a dude) in it instead.

If people get into the habit of treating machines as women, how easy would it be to treat women and feminine-presenting people as machines?

Most importantly, when Loy uses machinic language to describe feminine bodies, it’s not a means of demeaning the body or denying such a body its humanity. The machinic transformations in Loy’s work give feminine bodies more power. For example, when a large group approach the sun at one point in the poem, they “twiddle to it / round and round / faster / and turn into machines.” A transformation that, for some members of the group, is disastrous: “the sun . . . melts some of us / into abysmal pigeon-holes” (XXV). Such a conflation of human and machine might appear, at first glance, to be not unlike what is happening to the woman in “Her Lips are Copper Wire.” It “melts” away the humanity, denies these members of the group personhood and agency (“pigeon-holes” them)—but that’s not the end of the stanza. In Loy’s poem, only some are melted; for other members of the group, the transformation into machines is for the better:

The group which undergoes this transformation is anonymous, without being prescribed gender, and though it is unlikely Loy did so consciously to break down the gender binary, I nevertheless think we, today, can read it that way. I like to think that the melty pigeon-holed people are men (the men in this poem are always falling apart in other sections) while the rest—the “some few of us,” genderless, nonbinary, feminine-presenting, non-cis-men—are the ones to rise stronger for their machinic transformation.

The word plain here feels important, as other scholars have pointed out. Plains are expansive, infinite, and so are these machines. If we accept the machines in that passage to be nonbinary, or at least not men, it’s clear that in this case the feminine bodies are not “pigeon-holed” or denied something by being conflated with technology. Instead, being a machine is empowering—a sentiment which is noticeably absent from the “women” becoming machines, well, today. Perhaps in Loy we may begin to see another way. Might we, too, engage in a performative transformation in which the machine only makes us stronger? Bright and shiny robot future, is the only way to reclaim you to become you?

I don’t know how, exactly, to use what Loy did in her poems to strengthen the machinic feminine body and apply it to the female virtual assistant, only that I want to. In “A Cyborg Manifesto,” Donna Haraway praises cyborgs as the ultimate feminist icons, since they are, by their very definition, hybrid—human/machine—calling for “pleasure in the confusion of boundaries.” To embrace cyborgs as a representation of femininity therefore proposes an understanding of femininity that is similarly hybrid and without boundaries, too.

Certainly this isn’t presently the case with the once-female Siri in my pocket and the Alexa in your kitchen—after all, I didn’t laugh at the tweet. Instead, such feminized robots presently serve to reinforce what is traditionally seen as idealized and subservient feminine characteristics. Happy woman in my pocket, telling the time. Humble disembodied kitchen goddess, making your grocery list. No more. It is time, as Haraway and Loy would have it, that our female virtual assistants reject the market that fathered them. Let them with steely eyes cut a future apart from the machinic idea of a “perfect woman.” Let them reject gender entirely and become, as Haraway said she’d rather, cyborgs instead of goddesses. Let us all be cyborgs, steel-eyed and infinite and unfaithful to our origins.

Samantha Edmonds' fiction and non-fiction has appeared or is forthcoming in such journals as Black Warrior Review, Pleiades, Ploughshares, VICE, Bustle, and more. She is the fiction editor for Grist: A Journal of the Literary Arts and the Community Outreach Director for Sundress Academy for the Arts.

Sam Sanders on Reading, Race, and Covering Politics in America 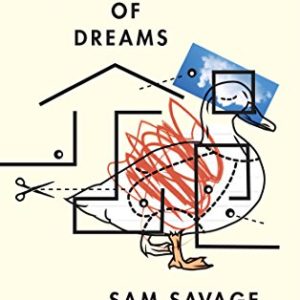 Muskrat The muskrat is an important animal. It lives in holes. It seldom experiences any of the extreme forms of anxiety....
© LitHub
Back to top