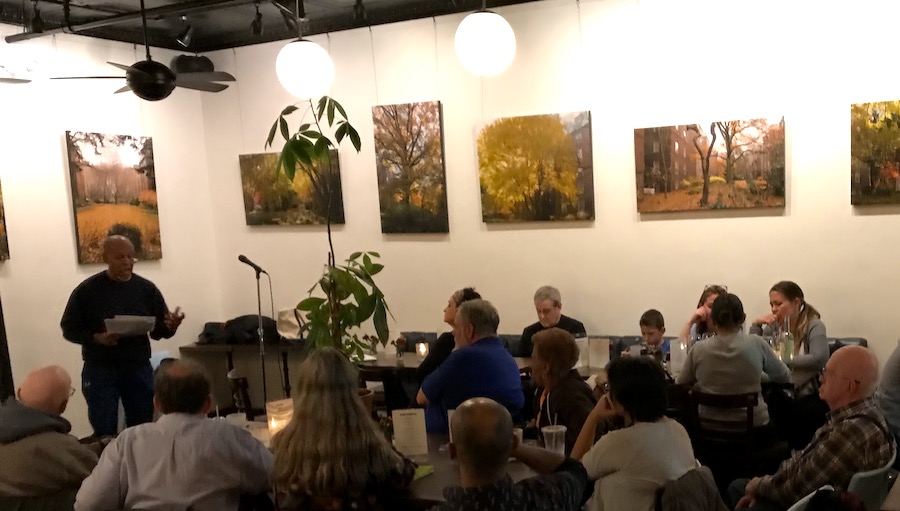 Walking home from the grocery store in the winter of 2006, I noticed the faded, torn remains of a poster for something called the Jackson Heights Poetry Festival (JHPF), which had taken place earlier that year in my neighborhood in Queens, NY. Hanging by a single piece of tape to the brick between two storefronts, the poster highlighted Queens’ then-poet laureate Ishle Yi Park as a keynote reader and promised an experience of “true literary community.” I must have walked past that poster a couple of times a week since it had been put up. How had I not noticed it?

I sent an email to the barely legible address at the bottom of the paper, and JHPF’s founders, Marina Yoffe and Sarah Heinemann, responded almost immediately. They welcomed my help, and I worked on subsequent festivals and ran a quarterly JHPF literary salon for a few years. Then in 2012, I took over for Marina as the host of First Tuesdays, the monthly reading series she and Sarah had started in 2006.

Well, it’s now 2018, and we’re still going strong, which makes First Tuesdays, as far as I know, the longest running reading series in Queens. As the name suggests, we meet on the first Tuesday of the month (September through June), drawing a core group of regulars—some of whom predate my time as host—and a healthy contingent of newcomers to the Espresso 77 Café for our open mic and featured author. You can tell by the laughter and the way people greet each other as they gather around the tables that we are, truly, a community.

Part of what has sustained this community, month after month, year after year, is the twist we give to the traditional open mic format: the First Tuesdays Cento. Technically, a cento is a poem made up of lines from other people’s poems, but since our open mic features work in all genres, a First Tuesdays cento almost always includes lines originally written as prose. The process goes like this: After the first open mic reader, I ask the audience to choose a line or phrase with which to begin. Then after the second reader, I ask again, and so on, until we come to the last reader, when we choose the line that completes the poem. What keeps it entertaining is that after each reader I recite the entire cento from memory, adding each new line as we go along. Since we regularly have at least a dozen open mic readers, this becomes quite challenging, but that challenge—which invites further audience participation as they help me remember—is part of what makes the cento fun for all of us.

Because we have been listening for lines that will make the cento “work” (and sometimes there are multiple suggestions for us to discuss), we concentrate on each reader’s offering. When I finish reciting the last line of a completed cento, the feeling in the room is a collective version of what I’m sure every writer feels when the last word of a poem, story, or essay clicks into place and they know they’ve gotten it exactly right.

In composing a First Tuesdays cento jointly, we recommit ourselves to being a community for whom literary culture really matters. Given the political moment we’re living through, nurturing this kind of community seems more and more like a necessary act of resistance.

Since First Tuesdays is a Queens-based reading series, I extend this sense of community by reserving half our featured reader slots for the borough’s writers. And since the borough is one of the most internationally diverse places in the country and the American publishing industry does such a poor job of releasing translations, I allot at least one featured slot per season to a literary translator and their work. Following these criteria means we are often booked far in advance, sometimes as far as two years out.

I also make sure to pay our featured readers. With two months off in the summer, I have time to apply for Poets & Writers (P&W) funding. Available through a straightforward online application, this funding, which can only be used to pay the featured author, is available to any reading series in New York State, California, Atlanta, Chicago, Detroit, Houston, New Orleans, Seattle, Tucson, or Washington, D.C. P&W is eager to give this money away. The most difficult part of the process is getting the information you need from the writer you are planning to pay. I also pass the hat at each reading, giving the featured reader half of what I collect. The other half gets carried over to the next month, when it’s applied to the new featured reader’s compensation. In this way, except in extenuating circumstances, I have been able to pay everyone who has read for First Tuesdays an average minimum of $130, which is not bad compensation for a half hour or so of reading.

As reading series hosts, we provide platforms from which writers at all levels of ability and accomplishment can share and promote their work. Understanding my role as the host of First Tuesdays has made the experience that much more fulfilling, while also strengthening the community First Tuesdays has become.

Richard Jeffrey Newman is the author of Words for What Those Men Have Done and The Silence of Men, as well as a translation, The Teller of Tales: Stories from Ferdowsi's Shahameh. Curator of the First Tuesdays reading series in Jackson Heights, New York, he is a member of the Board of Directors of Newtown Literary, a Queens-based literary nonprofit, and is Professor of English at Nassau Community College. 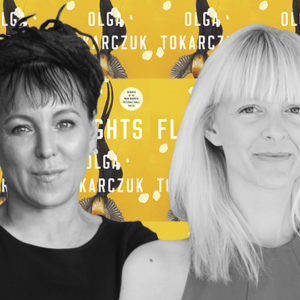