Natalka Burian on Creating Lit Scenes That Can Do Some Good

The morning of November 9th, 2016 was a dark one. As I went out into the New York City streets to take my kids to school and go to work, I was stunned by the similarity to a day 15 years earlier—September 11th. People outside and on the train were silent or weeping. For me, and for my colleagues, friends, and neighbors, the unimaginable had happened.

I reached out to friends I hadn’t seen or spoken to in months, looking for comfort. One of those friends was Nonie Brzyski, and in the weeks after the election, we talked about the need for action. We planned to attend marches and call our representatives, but we also wanted to do something more direct to support women like us who felt unsafe and betrayed by our fellow citizens who had elected a misogynist and xenophobe as president. As writers, we believe in the power of storytelling and its miraculous ability to put a listener into another person’s experience and to nourish compassion and empathy for others. So in January, Nonie and I launched The Freya Project, a monthly benefit reading series featuring women writers.

Living in New York City put us at a great advantage—our liberal “bubble” is wide and large—but we wanted to reach out to like-minded women who weren’t our friends and neighbors. We wanted to build an in-person community, to get people off their computers, away from their phones, and out into the world. We spread the word at first through an ungainly series of emails. Later, as interest grew, we shared information about our events and the organizations we wanted to support on our website designed by Nonie’s husband, Jon. We opened social media accounts, and expanded our community there, even reaching out to fascinating potential readers via Twitter and Instagram.

Our events are held on alternating months at the Brooklyn bars Elsa and Ramona, businesses I co-own and operate with my husband and brother-in-law. Each month, the funds raised through sales of our $20 tickets are sent to a small, nonprofit organization based in a community that doesn’t always support the organization’s vital work. We invite five women to read personal essays on a theme loosely related to the month’s beneficiary.

At our inaugural event on January 26th, each of our readers—Jennifer Baker, Dr. Nora Lansen, Louisa Luna, Stephanie Jimenez, and Jessica Valenti—shared a personal essay about a pregnancy scare. All proceeds from ticket sales went to La Frontera Fund, a nonprofit that assists Texas women traveling for safe abortion care. Most of the organizations we’ve supported work tirelessly in often hostile communities to promote reproductive justice. We support nonprofits with small operating budgets, such as the Refugee Women’s Network, the Afiya Center, and the Arkansas Abortion Support Network. For these organizations, a donation of a few thousand dollars can make a substantive difference. The generosity of our readers and our community has been overwhelming. After each event, I feel a little more restored and ready for the fight ahead.

Nonie and I weren’t the only friends trying to organize support for worthy causes across the country from New York City. In November, Kendall Storey and Ben Clague founded Words in Solidarity, a series that began directly after the election with a benefit reading for the Immigrants’ Rights Initiative of the ACLU. Their first event was so successful that they expanded it to include readings that raised funds for Planned Parenthood, the Southern Poverty Law Center, Picture the Homeless, and the Young Center for Immigrant Children’s Rights. They sell $20 raffle tickets for prizes donated by local businesses and publishing houses and choose the organizations they support based on issues that seem the most urgent.

“We believe it is important to stand with institutions that protect lives in this country, because those who have gained power will seek to strip and dismantle them,” Storey says. The community response to Words in Solidarity has been enthusiastic, with a supportive venue, the Saint Catherine Bar, and turnouts of 40 to 60 people at each event.

Rachel Howard established Yuba Lit in Nevada City, California in September 2015, donating half of all proceeds from the door to a local environmental protection charity, the Bear Yuba Land Trust. After the election, the series changed course in its donation strategy.

“(Yuba Lit) felt called to give to charities that would stand against the Trump cultural paradigm,” Howard says. Since January, Yuba Lit has made donations to the Southern Poverty Law Center, Planned Parenthood, and the ACLU. Howard takes community-building seriously, bringing it to the next level with Audience Flash Readings. Hopeful attendees who bring work to read are given raffle tickets and a potential opportunity to read their work. Howard’s literary community in the Sierra foothills is filled with established and emerging writers, as well as “people who don’t write but appreciate writing as a form of art.”

The community we’ve built at The Freya Project is even stronger than we imagined. Our readers have connected after the events, friendships have grown, jobs have been recommended and received, and advice exchanged. Many attendees return each month, hungry for a break from the discouraging news cycle and seeking to contribute—even in a small way—towards making our country better, safer, and more just.

The Freya Project, Words in Solidarity, and Yuba Lit wouldn’t exist without strong communities of people looking to gather together in the wake of trauma to be moved and changed.

Natalka Burian is the cofounder of the Freya Project, a nonprofit reading series that supports community-based activism and the work of women and nonbinary writers. She is the author of Welcome to the Slipstream, a young adult book, and the cocktail cookbook A Woman’s Drink, and is the co-owner of two bars, Elsa and Ramona. 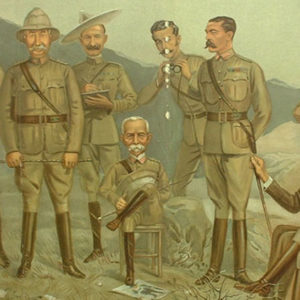 It’s a typical conversation-starter for authors: “What are you writing about these days?” My answering, “the Anglo-Boer...
© LitHub
Back to top