Plum Sykes: You Know It’s Bad When Politics Gets Into Fashion

The Author of Party Girls Die in Pearls on Trump, Brexit, and Getting Political

I have never been the sort of writer who felt inclined to air my observations on politics for public consumption. In fact, quite the opposite: I’ve always believed that my job as a fashion writer and novelist involved distracting the reader from the more trying aspects of life—one of which includes politics—by writing an escapist article for American Vogue, or putting out a novel like my latest, Party Girls Die In Pearls. At least, this is what I’ve told anyone who’s ever asked me to write about politics for their publication.

Recently I’ve wondered if my reluctance comes less from the definition of my job and more from a place of fear. For one, I fear that I don’t know enough about politics to make any interesting comments on it. Secondly, I’m wary of saying anything that might be misconstrued and retweeted squillions of times. I experienced this once when I reported on the model Cara Delevigne for American Vogue, and was trolled for my story. It wasn’t fun. I have friends in the media who have reported, for example, on Melania Trump’s recent wardrobe for the Trump foreign tour, and were attacked for their views.

But timidity is not a good look, to misconstrue a fashion analogy.  Were Thomas L. Friedman or Maureen Dowd or any of the brilliant op-ed writers at the New York Times to shrink from stating their views, we would have an extremely dull press—and, more importantly, one that is not truthful. In the past few months I have been continually amazed at the bravery these writers show in holding Donald Trump accountable, regardless of the battering they may receive from those who disagree with them.

This was recently confirmed to me when, over breakfast in LA with a fashion blogger from Rachel Zoe’s influential Zoereport.com, I noticed that the trendy young reporter’s manicured nails had been painted with a serious of immaculate calligraphied letters. On closer examination I read the word FUCK on one hand and TRUMP on the other. “It’s my silent protest,” the reporter explained. When the president makes it onto the fingernails of young women, politics has definitely become part of fashion. Ergo, I can’t get away with not talking about it any longer.

Traveling in the United States these past few weeks on a book tour, I find myself continually asked by American women “What do the British thing about Trump?” Now, I certainly cannot speak for all of Britain, but I can tell you what this British woman thinks: I am just as perplexed and confused as the Americans are. Our experience of Trump in the UK is, of course, different to the American one: we are not bombarded with Trump every single second by the British media as the Americans are. Our newspapers are not filled, cover-to-cover, with the Trump family dramas. Instead we are treated to news of Donald Trump’s most extreme tweets or actions several times a week. Every time I have tried to rationalize them, I find myself going around in circles, unable to provide any answers. Dinner party conversations in London yield little more than a sense that those present are grappling in the dark for answers where there aren’t any.

Instead of trying to come up with some kind of theory or answer about what has taken place, I now revert to questions, which are in some ways more helpful. The questions that I keep coming back to are, How did this happen? Why did this happen? What does it say about society that this did happen? Meanwhile, it seems that Americans are as befuddled by Brexit as we are by Trump. They cannot possibly understand how a tiny little country like England could possibly think it was going to be better off out of the EU. They are in as much shock as the British.

I recently appeared on the TV show Good Day New York to talk about my new novel. Within minutes the conversation had moved on to British politics. “Let’s talk about Brexit,” said the host, Greg Kelly, with a charming smile. Could I please explain it, as America was completely confused by Britain’s decision.

I had a few seconds to answer, and I found my brain whirring through the complicated arguments of the Brexiteers. There certainly wasn’t time to go into any of them, and in any case, none of them had made much sense to the Remain camp, of which I was a supporter. So, instead, I said to Greg that most of the British were asking the same questions about Brexit that the Americans are asking about Trump: How did it happen, and what does it say about us?

I told Greg that the British are almost envious of the Trump situation, despite the chaos it’s causing. After all, the American people have the right to vote a president in or out every four years. Trump will be gone, eventually, but we British can never vote ourselves back into the European Union. Britain’s right wing has imposed a far longer, and even more far-reaching sentence on the UK public. For us, no silver linings. That’s truly a place of fear, and it affects us right down to our (hopefully not bitten) nailbeds. Which means more writing about politics will likely be part of my future, and I’m putting on my bravest face. Of course, that will include a stunning lippie.

Plum Sykes was born in London and educated at Oxford. The author of the novels Bergdorf Blondes and The Debutante Divorcée and the Kindle Single memoir Oxford Girl, she is a contributing editor at American Vogue, where she writes about fashion, society, and Hollywood. She lives in the English countryside with her husband and two daughters. 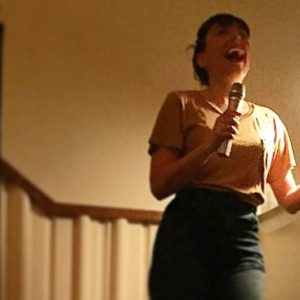 The morning of November 9th, 2016 was a dark one. As I went out into the New York City streets to take my kids to school...
© LitHub
Back to top