Reading Across America: How to Brand Your Reading Series

When I was first trying to get a job in advertising, a creative director told me that at its heart, it was a relatively simple job. If we were trying to sell cat food to cats, he told me, we’d be out of luck because none of us have any idea what cats are thinking. But we’re telling stories to humans, he said, and we all know what it’s like to be human.

We launched Liars’ League in London in 2007 with a simple concept: Writers write, actors read, audience listens, everybody wins. We accept themed submissions from writers, our team selects the best handful, and then we cast actors and host rehearsals before they perform the reading in front of a live audience. The original idea grew from our desire to give writers’ work the best possible public performance: not every writer loves reading.

When we decided to set up Liars’ League NYC, the London series had been running successfully for more than five years. Given our fairly uncomplicated model, we assumed the transatlantic translation would be relatively straightforward. It wasn’t: it turns out there are more reading series in New York than there are in London. Like, a lot more. In New York, you can be competing with several readings on any given night. So we realized we had to do more than just throw up a Facebook page and wait for the world to beat a path to our door. To find our audience, we had to tell our own story—to brand ourselves.

Brands are basically a mixture of experience and emotion. How you see and feel about, say, LaCroix. Or Tom’s Shoes. Or Matt Damon. Each one of those conjures up a different set of feelings and ideas, and that’s their brand. Branding is the way you get to tell your story, so your customers know who you are, what you stand for, and why they should be interested in what you have to sell rather than what someone else is selling.

There are many ways to do this—visual identity, advertising, pricing, customer communications, and so on. But before you can start telling your story, you have to know what you represent. Liars’ League NYC had a logo that told people who we were, we had a tagline that told people what we do, but we needed to work out why we were doing it.

When I think about some of the best branded reading series in New York, I’m actually thinking about what they stand for. When I think about the speculative fiction series Fantastic Fiction at KGB Bar, “community” comes to mind. When I think about Guerrilla Lit at Dixon Place, it’s “disruption.” For Pigeon Pages at powerHouse Arena, I think “celebration.” All of this is subjective—this is how their stories exist in my mind, though I suspect it’s not far off from the way you see them, too. But the point is that they have a brand identity: they know who they are.

It was also important for us to be seen by writers as the kind of space in which they would want their work to appear. We registered a branded URL and email address and gave our website a more professional look and feel, switching from a bland blog to the more dynamic Squarespace. This meant we could feature each of our stories in a more reader-friendly way, as well as giving us a front page that allowed us to highlight recently published pieces. Instead of Gmail, we used Mailchimp for newsletters to give our communications a greater sense of visual consistency. We try to make sure our brand is clear both visually and in terms of message on our website, newsletters, social media, the iTunes Store, or anywhere else we appear. In our over-programmed world, that consistency matters.

When we launched in NYC, we were lucky to be offered a slot at KGB Bar. There are many amazing, long-running series at KGB—Sunday Night Fiction, Fantastic Fiction, and True Story, to name but a few—and each has its own identity. Since ours is performance-based, we’ve also been influenced by many of New York’s spoken word series—The Moth, Blaise Allysen Kearsley’s How I Learned, and, a long time ago, Gabe Delahaye and Lindsay Robertson’s Ritalin Readings. So our events have an informal feel to them—in addition to our actors’ readings, we also feature a literary trivia quiz with prizes, along with other random asides. That informality is part of our brand, and hopefully it’s one of the reasons people keep turning up.

Five years in, and we’re doing pretty well. Our submission numbers have risen consistently each year, and we’re seeing a steady increase in the number of downloads of our podcast. That said, I’m also aware there are areas where we could use some major improvement. Every time our newsletter goes out and we get an unsubscribe, I spend the next few hours thinking about what we could have done better to avoid losing that one follower.

We haven’t used social media nearly enough, for a start. Social media can be one of the best ways to cultivate a brand, as it allows you to talk directly to your followers and brand advocates. We use Facebook and Twitter to talk about our shows and promote featured writers, but that’s kind of like walking into a party and shouting loudly about how awesome you are. I’d like to offer more than that: linking to content that our followers might find interesting, or promoting other people’s content, for example. Similarly, I’d like us to spend more time providing feedback to anyone who submits to us, reflecting our commitment to emerging writers, as well as developing our podcasts to include helpful discussion and advice.

Fortunately, branding is an ongoing process. A lot of it is trial and error. Some things work, others don’t, and you adjust as necessary. Branding means telling stories about ourselves. If you know why you want to tell that story, and as long as you tell it honestly and with passion wherever you are, you get to live happily ever after.

Andrew Lloyd-Jones is a writer, branding consultant, and co-founder of the reading series Liars’ League. His writing has featured in Cent Magazine, Northern Colorado Writers' Pooled Ink Anthology, Serving House Journal, and in the Canongate collection Original Sins, amongst others. He lives in New York, where he hosts Liars’ League NYC. Find out more at www.andrewlloydjones.com. 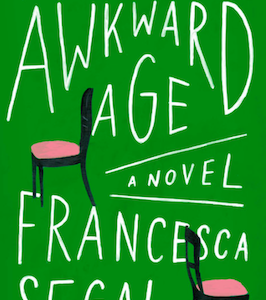 Though Pamela had not grown up with Thanksgiving, as a hostess she had nonetheless managed to capture its essence: a day on which...
© LitHub
Back to top