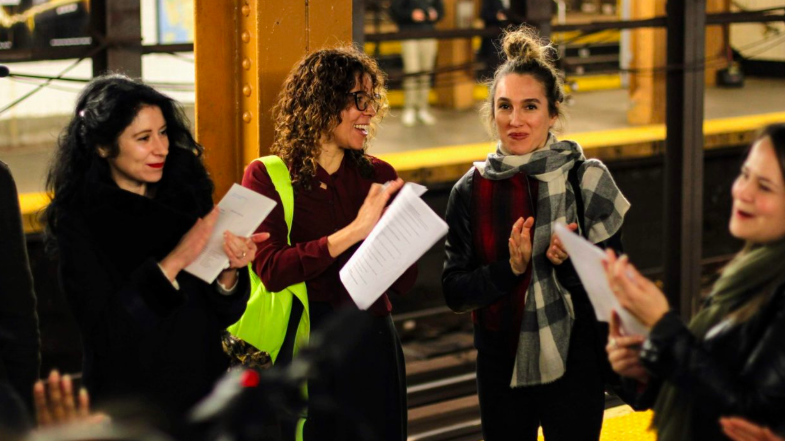 On the International Express Through the Immigrant Communities of Queens

One bright Saturday, on the weekend before it was announced that New York Governor Andrew Cuomo and New York City Mayor Bill de Blasio had offered up Long Island City and much of Western Queens to Amazon, I stood on a 7 train platform at the Vernon-Jackson subway station with eleven other poets and more than two dozen straphangers and poetry lovers. We were there to launch the collaborative audio project QUEENSBOUND by staging a reading on the first car of the first 7 train to pull in after 2 pm.

Nervous and excited, the readers were ready to take a risk and be vulnerable in a public space by allowing their work to be seen and heard in a new way. Remarkably, the 7 was on time and no track work was being done that weekend. When we stepped onto the train at 2:02 pm, there were about a dozen people in the car. As we started the reading, I announced to the unwitting passengers that we were not asking for money—we only wanted to offer some poems about Queens as we rode through it.

Some call the 7 train the “International Express,” since its Queens line runs from hyper-gentrified Long Island City—the first stop in the borough—through the heavily immigrant enclaves of Sunnyside, Woodside, Jackson Heights, East Elmhurst, and Corona before reaching its terminus in Flushing, the site of New York City’s first Chinatown. The train serves communities from the Philippines, Ireland, India, Bangladesh, Tibet, Mexico, Colombia, El Salvador, China, and many other countries.

To put together QUEENSBOUND, I approached some of the borough’s leading writers to collect and record poems and stories they’d written about their neighborhoods. The New York City subway map is QUEENSBOUND’s organizing principle, and designer Kyle Richard revised the Queens section of the map for our website. Visitors to the site can open up the map and click on select subway stations to hear the embedded audio. 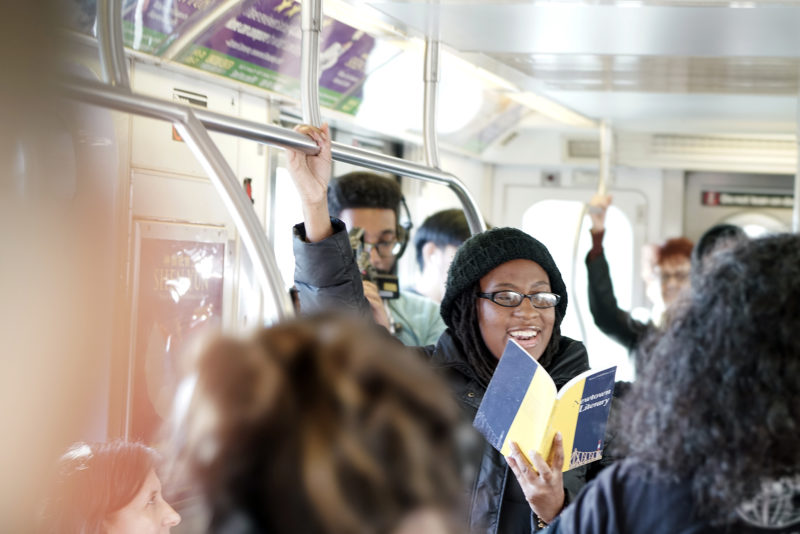 For the launch, staging a reading on the train seemed an obvious, if experimental, choice. I wondered what it would do to the poems, the poets, and the listeners to bring poetry into a subway’s democratic, open space. It was fitting that the reading was held on the train the participants take every day, and that the poems be read through the neighborhoods in which the works were located.

I rode the train several times to prepare for the launch and found that the travel time midday on a Saturday was shockingly consistent. The 25-minute ride was exactly what we needed for the reading.

We didn’t use amplification or a megaphone, and to present a dozen readers without taxing the audience’s attention, I asked the poets to stand in groups of four near the floor-to-ceiling poles located in the front, middle, and back of every car. Spacing readers this way allowed one poet to pass the baton to the next so we could fill the car with their words. I started off the reading and introduced the first poet, who stood in the middle of the train. After her poem, she introduced the next poet, and we kept that relay going all the way to our final stop. Each poet read only their poem featured on QUEENSBOUND, and most were one to three minutes. While the passengers couldn’t hear every poem, they could hear the poets closest to them.

Reactions to the reading were similar to those at any other train performance—a mix of delight and disregard—along with surprise and cheers. When we boarded at Vernon-Jackson, a passenger was sitting in a classic New York subway pose, obscured by his newspaper. At one point, he swept a corner of the paper down to see what was happening, then straightened it out and snapped it back in place. Next he folded it in half, then half again—all to better listen.

The audience leaned in to hear Rosebud Ben-Oni read her poem “Matarose Tags G-Dragon on the 7.” They then turned to Nicole Haroutunian for her testimony of walking, pregnant, through the heat of summer in Woodside, looking for shade, cool, and comfort. In a low, beautiful voice, the poet Abeer Y. Hoque declared, “Here I love you and the skyline is your measure. / Sharp and steel and love and cinder.” 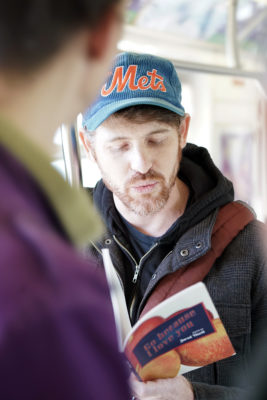 Joseph O. Legaspi was surrounded by listeners attuned to his offering to working-class Filipino passengers: “Bless them on their predawn commute, sweat-stained caps, hands in rare repose.” For “When They Come for Us on the 7 Train,” Brazilian poet Ananda Lima gave voice to the terror that ICE agents represent for Queens’ immigrant communities: “I think of my son if they take me / I think of my son if they don’t.”

A woman in a black hoodie stepped on at 61st Street and, seeing the camera crew on board, asked, “Are you filming me?!” and tucked herself in a corner of the car before getting off at the next station. I hadn’t anticipated that some people would not want to be filmed and might have good reasons for that, that public space is not a safe space for everyone.

Readers paused when we approached a station and picked up where they left off as the doors closed. At Woodside Avenue, a young woman in a pink duster stepped on, craning over her phone and texting feverishly with both thumbs. Next to her, Meera Nair stood up on the seat to read “In These Streets,” an affecting account of seeing the faces of her family from Kerala, India returned to her on the faces of strangers as she walked down 74th Street. Yet the woman in the pink duster somehow did not break from her pose, but stayed bent and texting even through the applause.

As we passed 74th Street, Malcolm Chang read his poem “Kalpana Chawla Way” to honor the Indian astronaut who died in the space shuttle Columbia crash. He imagined her becoming part of the stardust and returning…

to those left behind
to settle
mote
by
mote
on young girls in India,
on seekers the world over

And here in Jackson Heights
onto a small section of 74th Street
that bears her name. 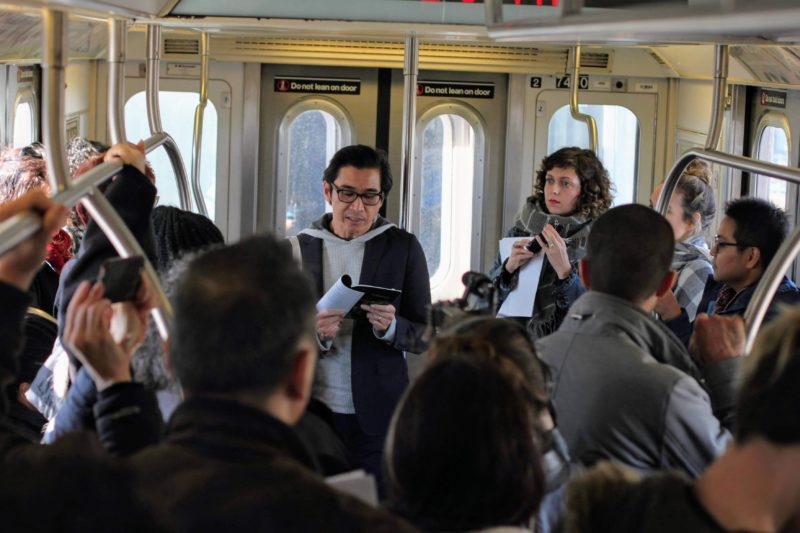 Near our final stop, at Mets-Willets Point, Sherese Francis read her Maya Angelou-inspired “Liberty Ashes (Keep Rising).” When we exited the train, the poets gathered for a photo, and passengers asked us when the next reading would be.

For the second half of the event, the poets and audience walked through Flushing Meadows Corona Park to the Queens Museum, where we continued with a second reading in the Panorama of the City of New York exhibit, a room-sized scale model of New York City’s five boroughs. I knew how hard it could be to get people out to the museum and, early on, had approached Catherine Grau, the museum’s Public Programs Coordinator, about hosting the event, explaining that we’d escort an audience there on the 7 train.

At the museum, a few poets read their work. With the website projected on the far wall, I discussed the site in a Q&A with Meera Nair, then passed the mic to Adam DeGraff and Tyler Burba of the Astoria reading series Kith & Kin. A few weeks earlier, I’d given them all the texts included in QUEENSBOUND, and they performed a song they’d written incorporating lines from every poet in the project. 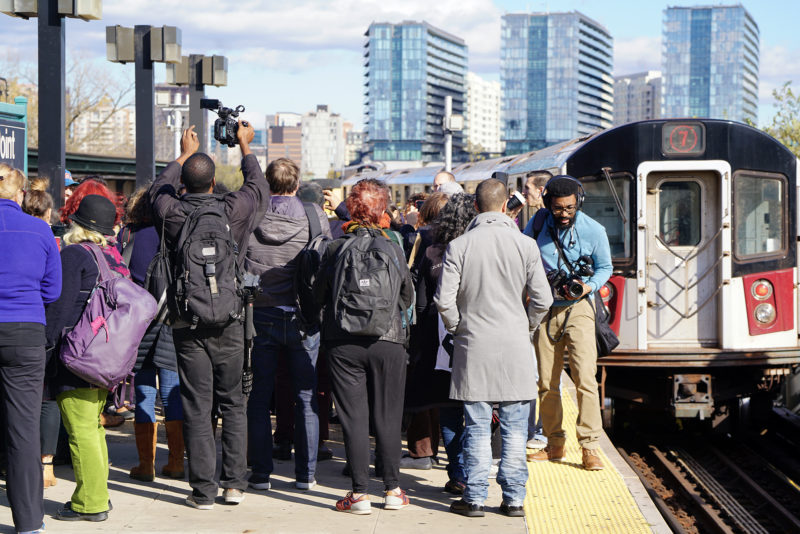 As the project evolves, we’ll form an editorial board to help curate more stories that showcase the quiet delights and secrets of Queens. We’ll stage more readings on the Queens lines, and, following the model established with the first reading, end each at an important cultural institution in the borough.

All that Queens embodies—a wealth of immigrant and working-class communities—is under siege. With the sudden news that Amazon’s second headquarters will be imposed on Queens and its residents at our own expense, QUEENSBOUND celebrates and documents an area in danger of wholesale gentrification. This small audio sampling reflects the lived experience of the borough at a moment when not just the stories of immigrants, but the people themselves, are being displaced, erased, and deported.

Those who attended the launch said the experience of riding together and listening to each other was incredibly affirming, particularly in this time of surging hate and divisiveness. As we traveled, I felt an organizer’s relief that the event was going well but, more than that, I felt the comfort of our community coming together with a feeling that has been in short supply of late: joy.

KC Trommer is the author of the debut poetry collection We Call Them Beautiful, which is forthcoming from Diode Editions in 2019. She is the curator of the audio project QUEENSBOUND and the Assistant Director of Communications at NYU Gallatin. She lives in Jackson Heights, Queens with her son.
http://www.kctrommer.com

What to Read While You're Recovering from Top Surgery

Can Parenthood Be the Artist's Best Tool? 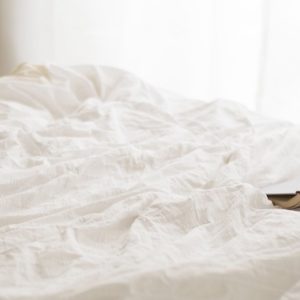 What to Read While You're Recovering from Top Surgery

This essay mentions suicidal thoughts and a method of suicide. A week or so after my top surgery, I went to the disability...
© LitHub
Back to top
Loading Comments...