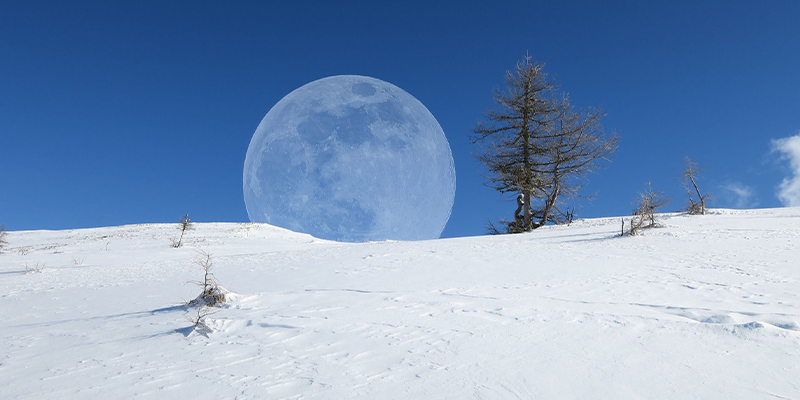 Read the loveliest moons in literature, in honor of today’s Snow Moon.

Last night, the moon graced us with her luminous presence at a very special point in her journey. Sure, we get a full moon every ~30 days, but February brings us the Snow Moon (also called the Storm Moon, the Hunger Moon, and the Candle Moon). What does this mean? Mostly that it’s a full moon taking place at a time typically known for its heavy snowfall. What does it mean spiritually? Honestly, I’m not sure but something about surrounding yourself with your passions and those who bring warmth to your life sounds right, right? Also, If this means anything to you, this will be the first full moon we’ve had in a while that takes place when no planets are in retrograde. Anyway, this baby lasts three whole nights, so if you missed her, you still have two chances to bask in her glory. And until nightfall, you can enjoy these beautiful moons captured on the page.

From Mary Ruefle’s Madness, Rack, and Honey (in the “Poetry and Moon” section, which everyone should read):

It has been noted many times that there are more sad poems than happy poems in this world, and though I have not yet fed them all into a computer and read the printout, I would guess that the moon occurs more frequently than the sun as an image in lyric poetry. And I wonder, why? I could start with a dozen reasons: insomnia; the moon’s association with death, one of poetry’s most common themes (yet the moon is equally associated with fertility); or the fact most of the poems in this world have supposedly been written by heterosexual men, who desire women, and the moon is embodied, in so many languages, as a woman, though that’s not universally true—German is one of the notable exceptions. One thing leads to another, one thing cancels another thing out, they are all interconnected, and none of them interest me. After all, it has been proved, using highly sensitive equipment, that even a cup of tea is subject to lunar tides.

There were two moons again that night, both two days past full. Aomame had a glass of brandy in one hand as she stared at the pair of moons, big and small, as if at an unsolvable puzzle. The more she looked, the more enigmatic the combination felt to her. If only she could ask the moon directly, “How did you suddenly come by this little green companion of yours?”! But the moon would not favor her with a reply.

The moon had been observing the earth close-up longer than anyone. It must have witnessed all the phenomena occurring—and all the acts carried out—on this earth. But the moon remained silent; it told no stories. All it did was embrace the heavy past with cool, measured detachment. On the moon there was neither air nor wind. Its vacuum was perfect for preserving memories unscathed. No one could unlock the heart of the moon. Aomame raised her glass to the moon and asked, “Have you gone to bed with someone in your arms lately?”

The moon did not answer.

From Kelly Link’s Magic for Beginners:

The moon shines down and paints the world a color he’s never seen before.

From Franny Choi’s “Perihelion: A History of Touch”:

The magic where the streetlights turn the snow pink lasts only for the first night, the same way, maybe, a blanket loses track of its scent when it’s been touched by too many hands, or the way a body grays when too many feet have dragged their cigarettes and complaints through it. But for that one first night, everything cold- flecked and whispering was ours, the pink light ours, sent from some other world so we could, for a night, feel untouched. So we could feel like sugar—crumbling, and perfect for it.

From Aimee Bender’s The Particular Sadness of Lemon Cake:

The moon slipped down into the frame of the window and reached an arm of pure light through the glass.

From Buddy Wakefield’s “We Were Emergencies”:

From Italo Calvino’s If on a winter’s night a traveler:

It was a serene autumn. As the November full moon approached, I found myself conversing one afternoon with Makiko about the most suitable place for observing the moon through the branches of the trees. I insisted that on the path under the gingko tree the carpet of fallen leaves would spread the moon’s reflected glow in a suspended luminosity.

There were women everywhere—my grandmother’s friends and strangers from the next town over, some from even farther than that. There were women who taught children, women who filed papers, women who cleaned toilets. Businesswomen, pleasure women, women who’d been married, and those that never did. Women in flowers, in grass skirts, in braids, in beads, women in only their skins. Old women, new women, tall women. Women hugging and signing and running and praying, women drinking in the night.

A forest of women undulating under a full harvest moon.

From Crockett Johnson’s Harold and the Purple Crayon:

One evening, after thinking it over for some time, Harold decided to go for a walk in the moonlight. There wasn’t any moon, and Harold needed a moon for a walk in the moonlight. And he needed something to walk on. He made a long straight path so he wouldn’t get lost. And he set off on his walk, taking his big purple crayon with him. But he didn’t seem to be getting anywhere on the long straight path. So he left the path for a short cut across a field. And the moon went with him.