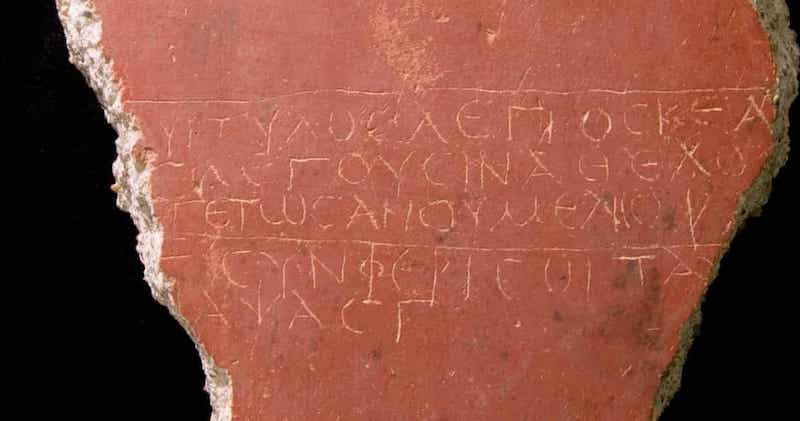 Read the love poem that went viral . . . in ancient Greece.

When asked to think of ancient Greek poetry, high, lofty verse is top of mind. But classics professor Tim Whitmarsh has found a very different type of Greek poem: a rhythmic, cheeky love poem that made its way via inscription from Spain to Mesopotamia.

The anonymous text has been found inscribed on twenty different gemstones, the best preserved one found around the neck of a young woman buried in a sarcophagus in Hungary, and as a graffito in Spain. The gemstones were mass-produced by workshops; Whitmarsh thinks they were mostly bought by middle-ranking members of Roman society. “The closest modern equivalent is probably a quote T-shirt,” Whitmarsh told The Guardian. “When you have people across a huge empire eager to buy into things that connect them to centers of fashion and power, you have the conditions for a simple poem to go viral, and that’s clearly what happened here. I think the poem appealed because it allowed people to escape local pigeonholing and claim participation in a network of sophisticates who ‘got’ this kind of playfully, sexually charged discourse.”

So, what’s the poem? It’s fairly short, and as Whitmarsh says, it reads like a pop song:

Λέγουσιν      They say
ἃ θέλουσιν   What they like
λεγέτωσαν   Let them say it
οὐ μέλι μοι   I don’t care
σὺ φίλι με     Go on, love me
συνφέρι σοι It does you good.

But the poem doesn’t just feel like a pop song because of its popularity and subject matter: it’s also its musicality. The simple verse has four syllables to each line, with a strong accent on the first and a weaker accent on the third; Whitmarsh thinks the poem could represent a missing link between ancient Mediterranean oral poetry and song and more modern forms. “You didn’t need specialist poets to create this kind of musical language, and the diction is very simple, so this was clearly a democratizing form of literature,” Whitmarsh told The Guardian. “We’re getting an exciting glimpse of a form of oral pop culture that lay under the surface of classical culture. This poem pushes back the earliest appearance of stressed poetry by at least 300 years.”