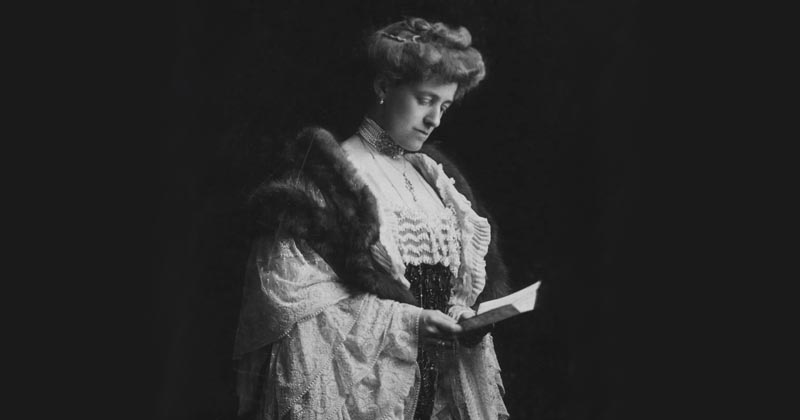 Read the letter that began the legendary friendship between Henry James and Edith Wharton.

On this day in 1900, Henry James sent his first letter to Edith Wharton, which kicked off a lifelong friendship and mentorship. Both authors had ties to the historic 21 Washington Place: James grew up in a now demolished building just east of Washington Square, and Wharton resided at Washington Square North for a brief period in 1882. Undoubtedly, Washington Square made a lasting impact on the two authors. James’s Washington Square was, in part, a tribute to his Greenwich Village upbringing, and Wharton’s The Age of Innocence was influenced by her short stay.

Wharton, who was an unabashed fan of James, had been hoping to befriend the writer for many years. Although James was considerably older than Wharton, he came to admire her for her access to the old money world of New York elites and her ability to capture this culture with unrestricted accuracy and insight. James was born at 21 Washington Place, but his wealthy family favored a cosmopolitan lifestyle, which saw them traveling all over Europe. Later, in 1876, James moved to England and became an English citizen in 1915, following the outbreak of World War I.

After reading Wharton’s “The Line of Least Resistance” in Lippincott’s Magazine, James felt compelled to write to her. At the time, Wharton had only published short stories and poems. In his letter, James encouraged Wharton to keep writing, advising her to cultivate her “ironic and satiric gifts.” The pair finally met in person in 1903, and the rest is history.

Read the full letter below.

I brave your interdiction & thank you both for your letter & for the brilliant little tale in the Philadelphia repository [Lippincott’s]. The latter has an admirable sharpness & neatness, & infinite wit & point—it only suffers a little, I think, from one’s not having a direct glimpse of the husband’s provoking causes—literally provoking ones. However, you may very well say that there are two sides to that; that one can’t do everything in 6000 words, one must narrowly choose (& à qui le dites-vous?) & that the complete non-vision of Millicent & her gentleman was a less evil than the frustrated squint to which you would have been at best reduced. Either do them or don’t (directly,) touch them—such was doubtless your instinct. The subject is really a big one for the canvas—that was really your difficulty. But the thing is done. And I applaud, I mean I value, I egg you on in, your study of the American life that surrounds you. Let yourself go in it & at it—it’s an untouched field, really: the folk who try, over there, don’t come within miles of any civilized, however superficially, any “evolved” life. And use to the full your remarkable ironic and satiric gifts; they form a most valuable (I hold,) & beneficent engine. Only, the Lippincott tale is a little hard, a little purely derisive. But that’s because you’re so young, &, with it, so clever. Youth is hard—& your needle-point, later on, will muffle itself in a little blur of silk. It is a needle-point! Do send me what you write, when you can kindly find time, & do, some day, better still, come to see yours, dear Mrs. Wharton, most truly,