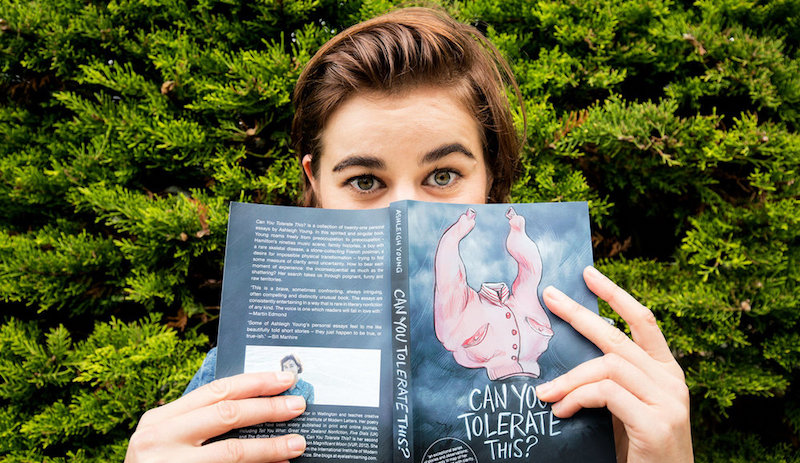 Read the Essay “Big Red” from Ashleigh Young’s Can You Tolerate This?

At the library I waited on the landing by the café. Below the railing on the ground floor there were grey coats, black coats, brown coats. And then a block of red—JP striding through the automatic doors. His NZ Post jacket swung open as he bounded up the steps two at a time. ‘Eyelash! Sorry I’m late. I was besieged by slow walkers.’

A few people were already looking in our direction—my brother’s voice is loud and expressive, and his name for me, Eyelash, always sounds odd in public. My brother looked a bit odd, too, in his oversized red jacket and shorts and NZ Post-issued socks, which he wore mid-ankle so that the envelope icons could be seen clearly. His legs looked almost like a caricature of good legs: tanned, hairy, with tough, balled calves. ‘Sorry about the uniform. It’s to the discredit of the postal service that these uniforms don’t blend seamlessly in cafés.’

The reason we were meeting that day was that I wanted to tell JP I was thinking of writing about the underground music scene in Hamilton in the late 1990s. The bands that sparked brightly and then vanished, bands like JP’s own, the Clampers. I had vague but great ambitions for the piece. It would be about the edges of music, the edges of Hamilton, the underbelly of our town. It would be about drunkenness to keep warm in winter, about cars stuffed with guitars, drum kits stuffed with pillows. It would incorporate loosely connected anecdotes that were basically insignificant but that I thought were funny, like the time we saw Mercury Rev play in Auckland and our mother couldn’t get a ticket and afterwards said she’d actually been able to hear the music faintly from the car in the car park and had had a very nice time. My enthusiasm for the story was such that I felt it would write itself. The story was virtually already made. All I needed to do was grab hold of one end and pull the rest up behind it like electrical wire out of the ground. ‘Don’t worry,’ I told JP, ‘I’ll change anything incriminating.’

And I told JP that I wanted Big Red to be in the piece too, somehow, even in passing, a ghost in the night. I described my idea to cast it as a kind of symbol—of what, I wasn’t sure yet—or even a character in its own right.

I was relieved to find that JP seemed pleased about my idea. ‘Big Red, resurrected!’

In the children’s section below where we sat, a boy had upended a whole row of books from a shelf. He sat on the floor surrounded by books and howled.

We turned back to our coffee. ‘What happened to Big Red, anyway?’ I said.

And that would be one of the last times I would see JP just as he was: my brother, unwritten.

I’d thought he had found the jacket in a linen cupboard at home in Te Kūiti. It was in a polythene sack full of winter clothes that one of my mother’s well-meaning friends had given to us. Among the thicket of bush socks, duffel coat as black as a dog and sticky woollen jumpers, there was the jacket ready to be hoisted like a flag.

In fact that wasn’t the case. The jacket was given to him by one of my mother’s colleagues at the local high school, a popular but terrifying English teacher with stony blue eyes and white-blond hair that stood on end and which he often ran his hands through in exasperation. He threw chairs against the wall and sometimes taught his classes standing on his desk like Mr Keating from Dead Poets Society. I remember his red socks. I adored him. So did my mother; they were firm friends. We inherited some of his things—his Kinks and Split Enz records, his books and some clothes—when he moved away to London.

The jacket was soft and puffy, with a gathered waist and a high collar with odd tan stripes on it. It was essentially a bomber jacket. It had snap-buttons down the front. Its flight-silk sleeves were full and shiny, but the cuffs were snugly elasticated. A stunt pilot from Reno might have stepped from his plane wearing such a jacket. It was a true red—a Postman Pat red, an American sunset red, almost the red of the saveloys our grandmother ladled onto our plates in Ōamaru. And it was warm, which was important, because that winter JP was living in a room underneath a house on Memorial Drive in Hamilton, and it was always cold there. His room had louvre windows and a puddle under the door. It was a bit like living inside a log.

He began wearing the jacket everywhere. He wore it when he walked across the overhead bridge to the polytechnic where he was doing his songwriting degree. It billowed out behind him like an extra body. He wore it into the CD store where the girl he liked worked. When he came home to Te Kūiti on some weekends, I was briefly enveloped in the jacket, and again before he left. ‘Take it easy, Eyelash,’ he said, and I watched him bump down Sturgess Terrace in the Cortina, in which Dad had helped him get his driver’s license.

The jacket was the first thing he put on each morning. He put it on over the green, polka-dotted, knee-length smock from Postie Plus that he slept in. I picture him running barefoot from his room under the house, up the lawn and into the kitchen at Mem Drive, which was what everyone called the huge old building. Mem Drive housed many transients, but as well as JP there was another mainstay, an artist called Snakes.

Snakes was from London. ‘His work is quite famous in some countries,’ JP once told me, ‘but no one really knows who he is in New Zealand.’ Snakes had changed his name by deed poll to Emit Snake-Beings, which JP pronounced Ee-mit Snake Beans; I don’t know what his name was before. He’d worked as a prop maker and lighting technician on movie sets, and had founded a garden company. He now spent a lot of his time at the kitchen table or in a loft up in the ceiling, which was his bedroom and also his workshop. His artworks or ‘shrines’ were mounted in glass cases on walls around the house. The shrines came from electrical odds and ends: live and dead lightbulbs, spark plugs, telephone receivers, electric fans, grandfather clock faces. Some were coin-operated; you could make the lights flash and flicker and the wheels spin. Or other things would happen—a tape would play street sounds from countries around the world, or electric fans would blast cold air onto your hands.

All of the shrines had grand names. ‘Shrine to the Dead Light Bulb.’ ‘Shrine to the Alchemical Essence of Time.’ ‘Basilica of the Tattooist.’ ‘Mechanical Divination Machine.’ ‘Random Divinity Selector.’ There was something anatomical about the shrines. In their glass cases they bristled with potential energy. They frightened me slightly in the same way Gene Wilder as Willy Wonka frightened me: it was the glassy smile and the non sequiturs that were meant to charm you but that hinted at some underlying menace.

Mem Drive itself felt like an abandoned playground. Inside it were childhood things that had faded and warped. Wherever you turned there was something to startle you: a clump of grinning sock monkeys, a painting of horses and elephants up high on bony legs like stilts, a trapdoor in the pantry that might admit a stranger in the night. The high, cracked ceilings made the house enormous. It dwarfed everyone who lived there; everyone, it seemed to me, but Snakes. He was its heart.

One morning, when JP burst into the kitchen in his red jacket, Snakes looked up from his breakfast and announced, ‘Hey, it’s JP and big red.’ And because JP respected Snakes, the jacket became Big Red. The name gave it permanence, like the naming of a car. At Mem Drive, with its trapdoors and shrines, Big Red fitted perfectly.

Get to Know the 2017 Windham-Campbell Prize Winners 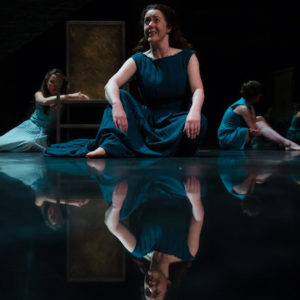 CHARACTERS HECUBA. QUEEN OF TROY. WIFE OF PRIAM. AGAMEMNON. KING OF THE ACHAEANS. CASSANDRA. DAUGHTER OF HECUBA. POLYXENA....
© LitHub
Back to top