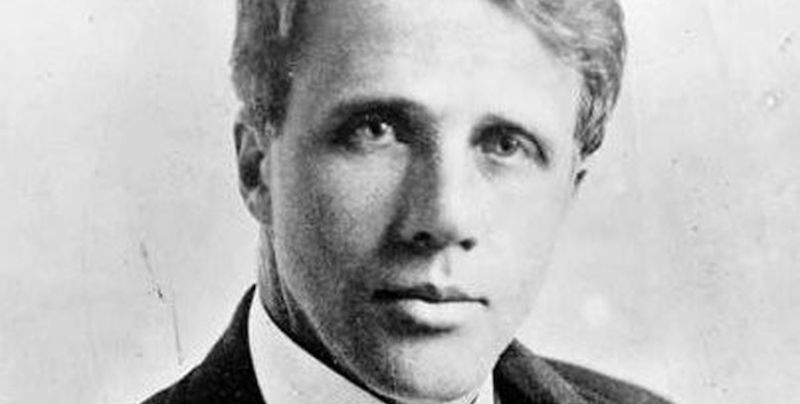 Read Robert Frost’s first published poem, written when he was 18.

Today, Robert Frost is characterized by his economical lyric and his ability to write grace into everyday speech. Even his 1913 debut collection, A Boy’s Will, had this quality: as Ezra Pound put it, “The man has the good sense to speak naturally and to paint the thing, the thing as he sees it. And to do this is a very different matter than gunning about for the circumplectious polysyllable.” But A Boy’s Will included one poem that was particularly different in style—Frost’s first professionally published poem, which appeared today in 1894 on the front page of the Independent:

MY BUTTERFLY. An Elegy.

Thine emulous, fond flowers are dead, too,
And the daft sun-assaulter, he
That frightened thee so oft, is fled or dead:
Save only me
(Nor is it sad to thee!),
Save only me
There is none left to mourn thee in the fields.

The gray grass is scarce dappled with the snow;
Its two banks have not shut upon the river;
But it is long ago,
It seems forever,
Since first I saw thee glance,
With all the dazzling other ones,
In airy dalliance,
Precipitate in love,
Tossed, tangled, whirled and whirled above,
Like a limp rose-wreath in a fairy dance.

When that was, the soft mist
Of my two tears hung not on all the fields,
And I was glad for thee,
And glad for me, I wist.

And didst thou think, who tottered wandering on high,
Fate had not made thee for the pleasure of the wind,
With those great careless wings?
‘Twas happier to die
And let the days blow by.
These were the unlearned things.
It seemed God let thee flutter from his gentle clasp:
Then, fearful he had let thee win
Too far beyond him to be gathered in,
Snatched thee, o’ereager, with ungentle grasp,
Jealous of immortality.

Ah! I remember me
How once conspiracy was rife
Against my life—
(The languor of it!), and,
Surging, the grasses dizzied me of thought,
The breeze three odors brought,
And a gem-flower waved in a wand.
Then, when I was distraught
And could not speak,
Sidelong, full on my cheek,
What should that reckless zephyr fling
But the wild touch of thy dye-dusty wing!

I found that wing withered to-day;
For thou art dead, I said,
And the strange birds say
I found it with the withered leaves
Under the eaves.

Frost wrote “My Butterfly” when he was only eighteen, and clearly, the archaic language and syntax is a far cry from the style for which Frost became known. Frost acknowledged this in an interview with poet Randall Jarrell in 1959; when Jarrell remarked to Frost that it was “queer reading A Boy’s Will to find so many things like you but then to find all the regular inversions, and poetic license, and ‘tis and o’er and the list and so on,” Frost said:

See, [these poeticisms] gradually eliminated themselves. I never did it on purpose. I just got a little shy about using poeticisms. Ashamed of them a little. Felt a false feeling about them. And the first one that’s kept in here, “The Butterfly,” is the worst, you see, in that respect. The butterfly one I only kept for one passage in it . . . You see, the passage that I liked was just—this was very young, I was seventeen, see, when I wrote it.

(Frost’s favorite passage in “My Butterfly” begins, “With all the dazzling other ones.”)

Though Frost eased out of this more traditional style, we have “My Butterfly” to thank for sparking Frost’s belief in his own career. As the Library of Congress catalogued, in a letter to Susan Ward, the poetry editor of The Independent, shortly after “My Butterfly”’s publication, Frost wrote of the poem’s galvanizing power: “I undertake a future. I cannot believe that poem was merely a chance. I will surpass it.” As Frost wrote, “Even in my failures I find all the promise I require to justify the astonishing magnitude of my ambition”—and isn’t that the point of juvenilia? (Or really, anything?)