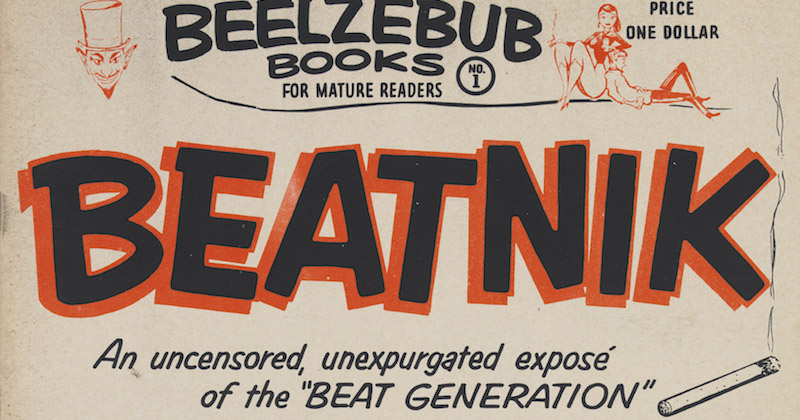 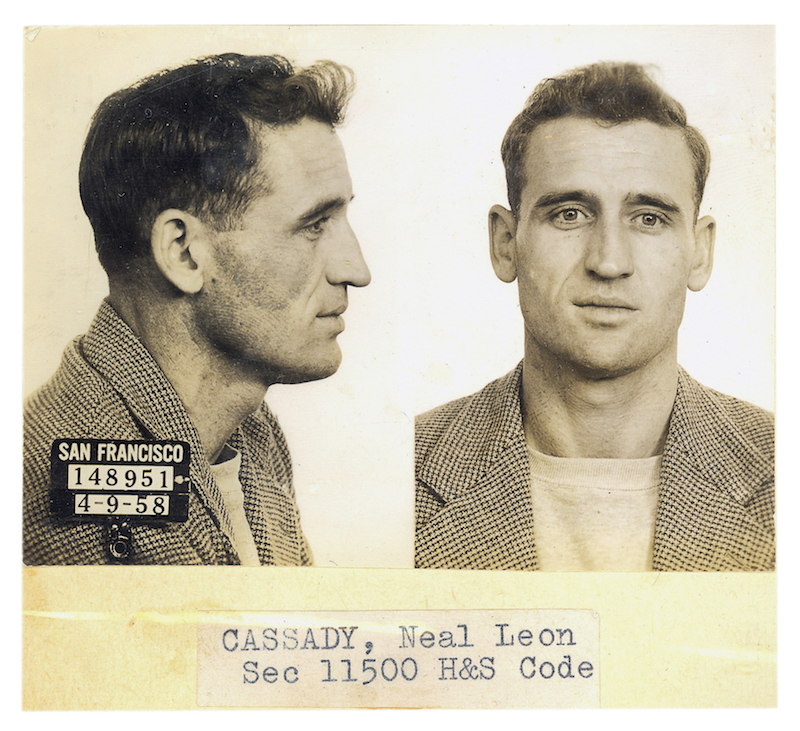 In 1958, Neal Cassady gave a couple of joints to undercover narcotic officers as payment for a ride to work and was arrested. He served two years in prison, much of it in San Quentin. When he was released in 1960, the Beat progenitor plunged into another strata of the counterculture: LSD evangelism. Cassady had met Burroughs, Ginsberg, and Kerouac in 1947 in New York and the latter two were captivated by this handsome, bisexual womanizer and car thief, who lived the sort of instinctive life the Beats admired. Cassady had an insatiable appetite for drugs, sex, and adventure. He slept with Ginsberg, rapped with Kerouac, and drove pot grown by Burroughs from Texas to New York. He was unreliable but he was also smart, inspiring Kerouac’s On the Road and Visions of Cody, as well as Ginsberg’s Howl, with its telling line about “NC, secret hero of these poems, cocksman and Adonis of Denver.” Cassady loved marijuana. When he worked on the railroads, he’d smuggle large amounts of weed across the Mexican border to give away in California, playing a key role in the introduction of cannabis into the burgeoning counterculture. In Visions of Cody, Kerouac meticulously describes Cassady’s stash kit—“a dish, glass, deep dish, small, with rolling papers, tweezers, roach pipe (hollow steel tube), roach pipe ramrod came with the tube, attached, an art tool  actually, bottles of seeds . . .”

After prison, Cassady’s life was changed and he was drawn to hallucinogens. Ginsberg gave him some of Timothy Leary’s psilocybin—Cassady pronounced it “the Rolls-Royce of dope”—and he began hanging out in Palo Alto with acid enthusiast and writer Ken Kesey. Cassady later drove Kesey’s Merry Prankster magic bus across the United States to hook up with Leary and introduced Kesey to Kerouac, with no great success. Cassady was the first of the key Beats to die. In 1968, he walked along a railroad track outside San Miguel in Mexico under the influence of Seconal and pulque (a Mexican alcoholic drink), passed out, and died of hypothermia.

This photograph comes from a book of San Francisco Police Department mugshots. It contains around five hundred pictures, many of people who have been arrested for drugs and minor misdemeanors. A number of the images are annotated by the police department, often with the addition of racial epithets. In the book alongside Neal Cassady is Harry “The Hipster” Gibson, the jazz and blues singer who claims to have invented the word hipster and wrote the classic drug song, “Who Put the Benzedrine in Mrs. Murphy’s Ovaltine?” 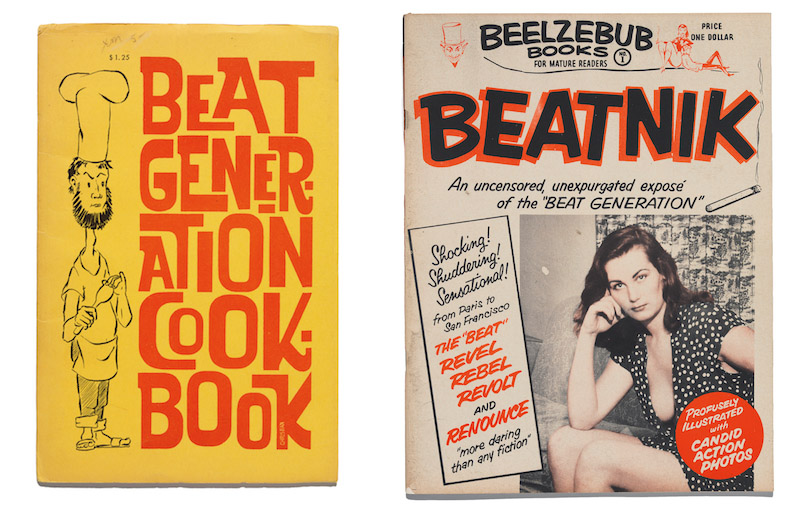 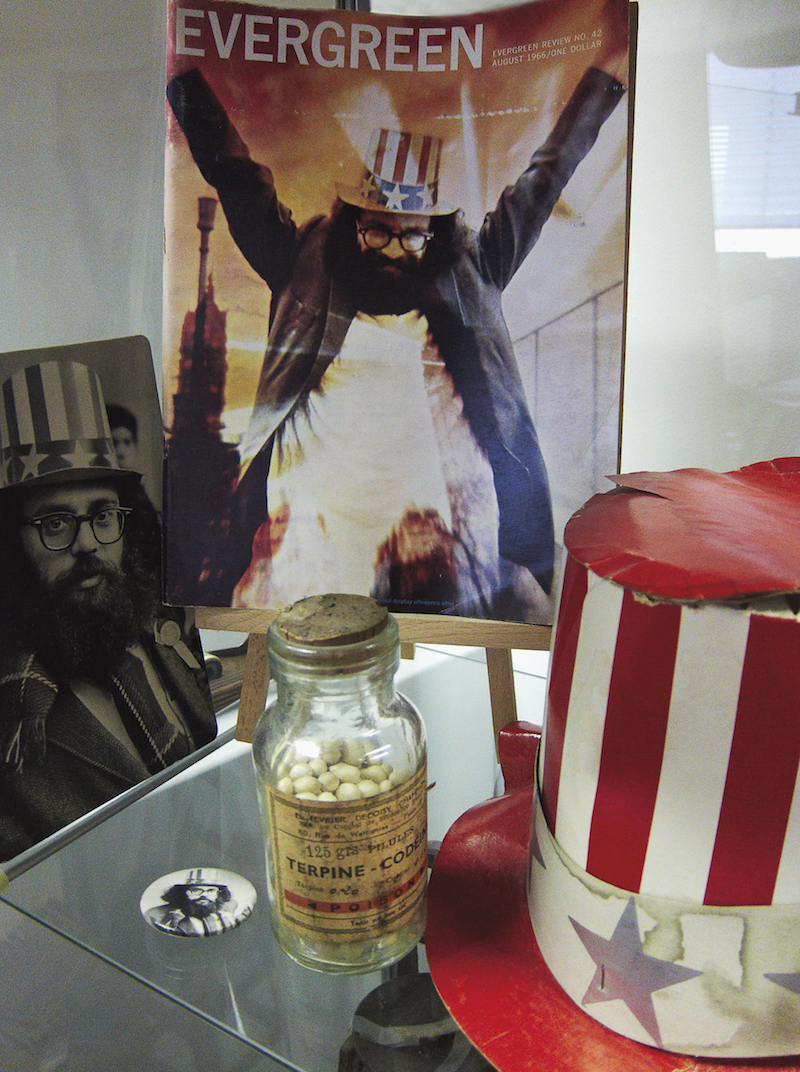 Allen Ginsberg was the unifying force at the center of the Beats, idealistic, outgoing, and all-inclusive where Kerouac and Burroughs could lapse into cynicism and solipsism. His biographer Barry Miles argues that “without Ginsberg, Burroughs would almost certainly have never published Junkie and would not have continued his writing career . . . it is unlikely that Kerouac would have published anything other than his first book, and even that was done with Allen’s aid.” Ginsberg also promoted numerous other nonestablishment writers and poets, such as Gregory Corso and Gary Snyder, as well as involving himself in the work of counterculture figures ranging from Bob Dylan and the Beatles to Timothy Leary, lending his furious enthusiasm and remarkable contacts book to almost any cause going. If there is a defining figure of the Beat/hippie movements, through which the ebb and flow of the counterculture could be traced, it is Ginsberg.

Ginsberg’s own literary reputation was made by Howl, the epic, autobiographical poem he published in 1956 through City Lights in San Francisco. “I thought I wouldn’t write a poem,” he said later, “but just write what I wanted without fear, let my imagination go . . .” The poem made Ginsberg famous, particularly when it became the focus of an unsuccessful obscenity case in 1957. In 1948, Ginsberg had a vision in which he heard the voice of William Blake, an experience he spent decades trying to rediscover through drugs to “expand my mystic consciousness.” Ginsberg took mescaline, psilocybin, heroin, ether, laughing gas, hash, yagé, and LSD, “virtually ignoring everyday life in his concerted effort to widen his consciousness,” until eventually accepting the Blake experience would never be repeated (although he continued to campaign for the legalization of marijuana). Ginsberg was a keen sexual adventurer and threw himself into politics just as diligently, taking a prominent role in the movement against the Vietnam War. He wore this top hat at an antiwar demo in New York in 1966. 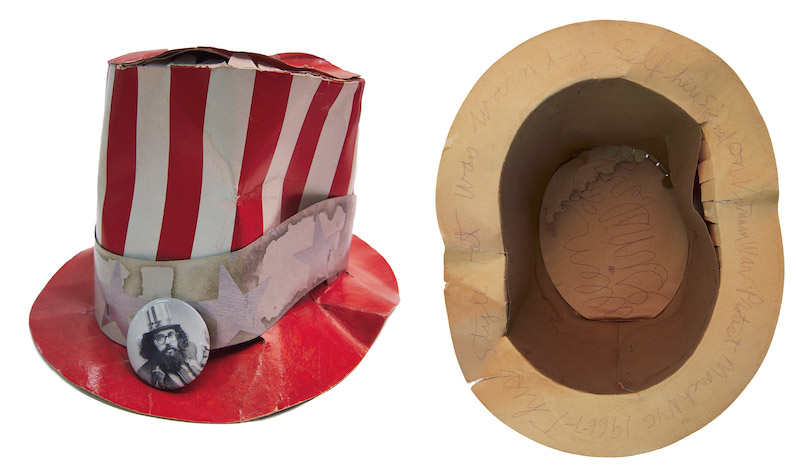 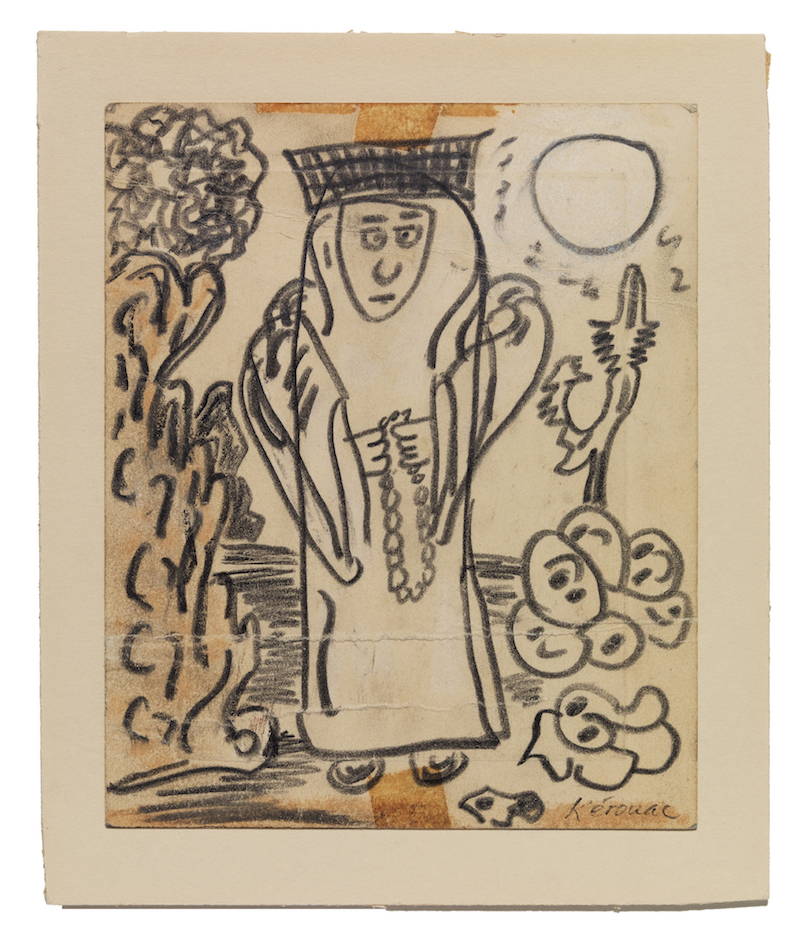 Jack Kerouac was born of French-Canadian parents and his mother was a devout Catholic, a religion Kerouac himself returned to strongly in his later years. Even in his youth, he would pray and read the Bible before beginning any new writing endeavor, and by the mid-’60s, as his former friends embraced the counterculture, he was proudly asserting, “I’m not a Beatnik, I’m a Catholic,” and would sit in bars sketching angels, cardinals, and crosses on napkins. He even argued that On the Road was about two Catholic friends searching for God.

This illustration was made toward the end of 1956, as Kerouac’s Catholicism was reasserting itself after a strong flirtation with Buddhism. Still waiting for On the Road (and a number of other books) to get a publishing deal, he had spent the summer fire-watching in Washington state, then returned to San Francisco for “two weeks of drunken carousing,” according to biographer Paul Maher, before heading to Mexico by freight train. The drawing was made on the back of a card advertising the opening of “Ruth’s card shoppe and sales arcade” in Berkeley on September 17, 1956, so was presumably made at some point during the carousing or on the journey immediately afterward. Executed with thick pencil and signed bottom right, it shows a religious figure fingering rosary beads in a desert landscape of rocks and cactuses. 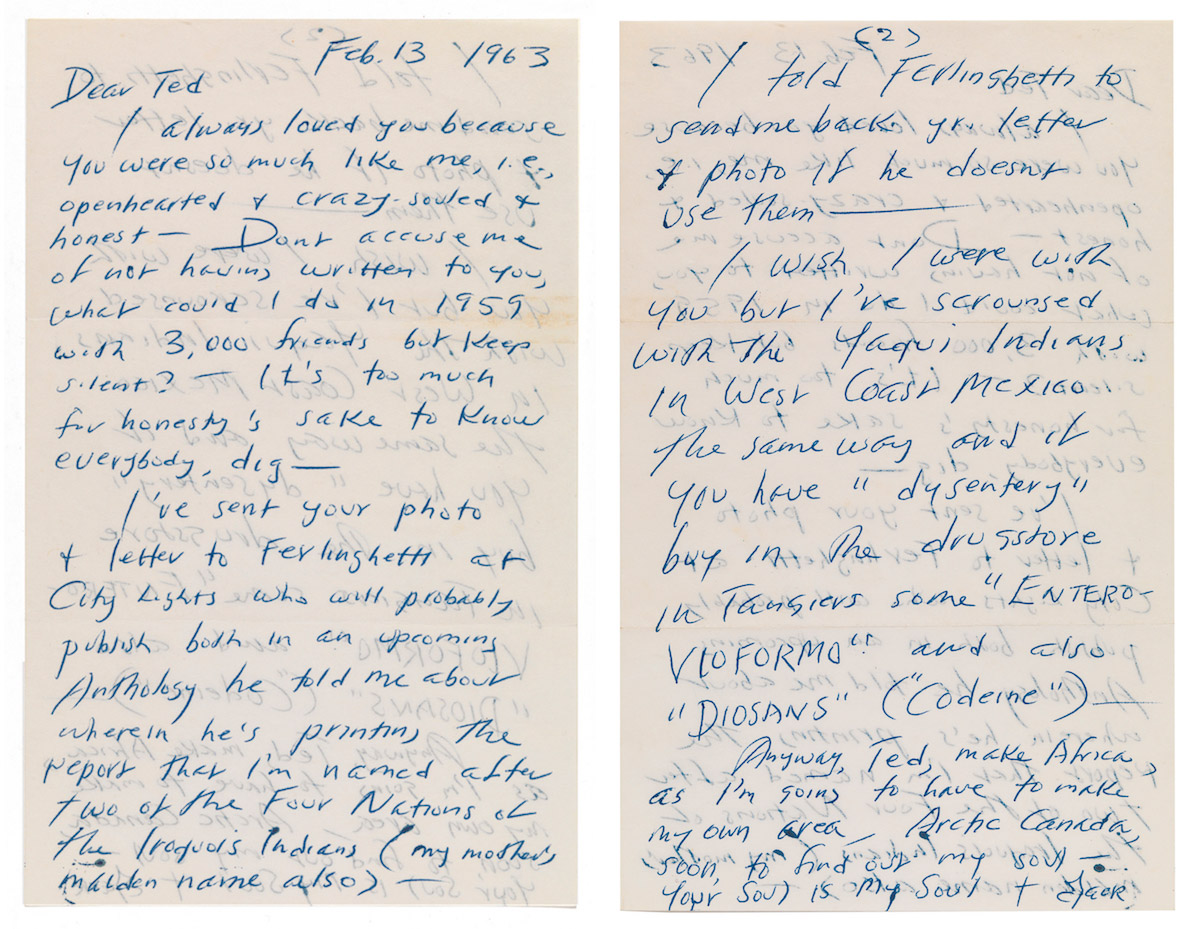 Letter to Ted Joans, an African American poet and painter, then in Morocco, February 1963. The reference to “1959 with 3,000 friends” refers to the period of immense fame for Kerouac after On the Road was finally published. 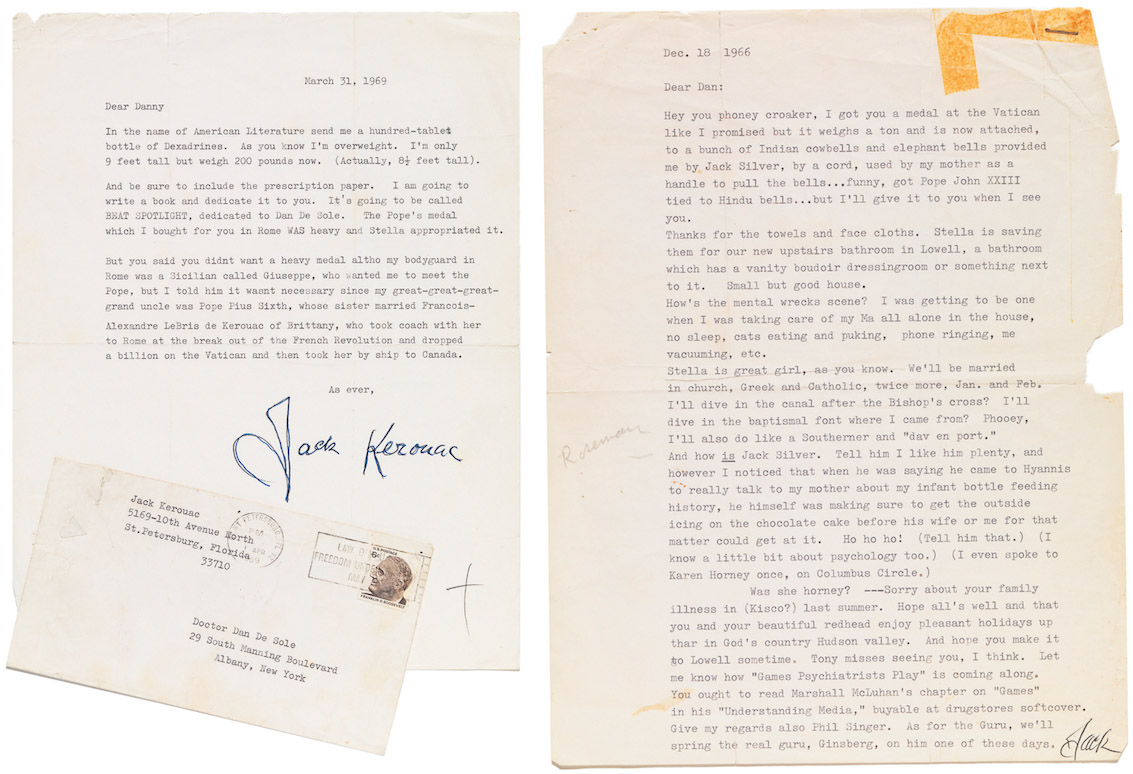 Letters to Dan DeSole, Kerouac’s doctor. The first is from December 1966, shortly after DeSole prescribed Kerouac a mixture of Benadryl and Valium (codenamed “Wild Turkey”) in a bid to wean him off alcohol. The second is from March 1969 and begins with Kerouac’s demand, “In the name of American Literature send me a 100-tablet bottle of Dexadrines” and includes Kerouac’s claim he would dedicate a book called Beat Spotlight to DeSole (Kerouac’s posthumous Pic was eventually dedicated to DeSole). Kerouac died in October that year. 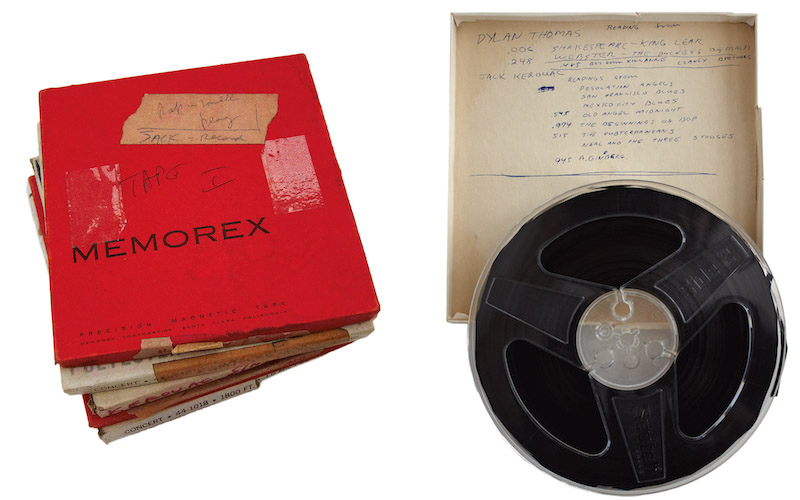 Julio wrote in 2006 that he had acquired “12 hours of reel-to-reel assembled by J. K.’s shrink with amazing, unpublished, unheard material ending with the last 10 minutes of his memorial mass in Lowell, Massachusetts.” The tapes feature “Kerouac singing, chanting, ranting, swearing and improvising along with his wife Stella and her brother [Tony Sampas], Ginsberg, Corso and Ferlinghetti spanning the years from pre–On the Road to death.” By turns bizarre, sad, and touching, the tapes include bursts of seemingly improvised prose, as well as conversations with friends and a Rolling Stone reporter at Kerouac’s memorial. Kerouac talks about jazz and the Beats, sings “On Top of Old Smokey” and raps drunkenly with his wife. Kerouac was known to use tape to record extracts from his books, and would also record his stoned conversations with Neal Cassady. 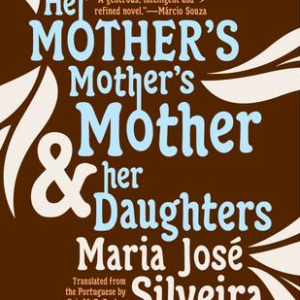 Her Mother’s Mother’s Mother and Her Daughters It was easy to see at first glance that Lígia was a determined person with her own inner light. Old Man Damasceno had certainly...
© LitHub
Back to top
Loading Comments...