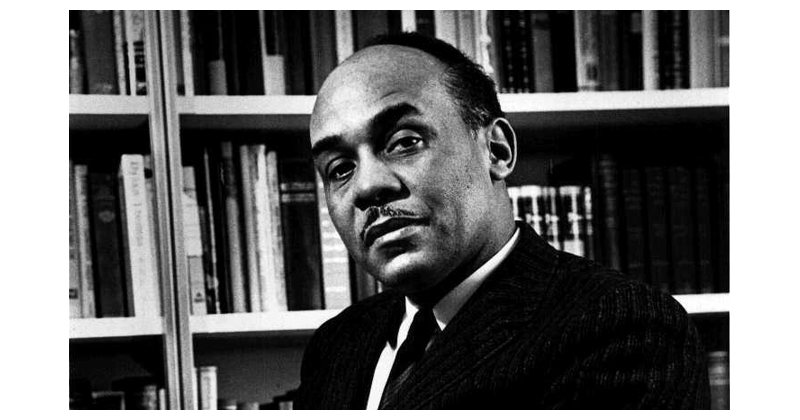 VIA University of California Press

Although there is an extraordinary, Gatsby-like capacity for hope exhibited in Ralph Ellison’s work, optimism is certainly the wrong word for it. In fact, Ellison’s version is propped up by the ﬂying buttresses of both tragedy and comedy. It swings wildly between the two, like the swinging rhythms of jazz in Stanley Crouch’s eloquent description:

What I refer to is the expression of sorrow or melancholy in a melodic line that is contrasted by a jaunty or exuberant rhythm, that combination of grace and intensity we know as swing. In jazz, sorrow rhythmically transforms itself into joy, which is perhaps the point of the music: joy earned or arrived at through performance, through creation.

In identifying these oscillations of sorrow and exuberance in jazz, Crouch taps into what Ellison named “soul.” Crouch essentially parses and explains Ellison’s grammar of soul, noting the way a high-spirited rhythm can transform a melancholic line into a stirring and uplifting performance.

Here and elsewhere, Crouch takes cues from Ellison on when and how to add tragic and comic elements in the right proportions. An excessive focus on one element could ruin the rhythm. If tragic lessons are erased from memory, we end up with banal and artiﬁcial sounds, like elevator music, a ditty for advertising, or the most triﬂing forms of pop music; at the same time, without the comic sense we will be left with cheerless and drab sounds, music that turns the living soul into stone and causes it to sink and drown in gloom. For the soul to grow to its fullest temple-like potential, Ellison required elements of each: the comic sense would be a leavening grace to lighten the gravity of suffering, allowing the American soul to rise to its fullest potential. With both ingredients in the right balance, soul is attained, a kind of multigrain bread of life.

Ellison’s defined soul as such: “It is its ability to articulate this tragic-comic attitude toward life that explains much of the mysterious power and attractiveness of that quality of Negro American style known as ‘soul.’ An expression of American diversity within unity, of blackness with whiteness, soul announces the presence of a creative struggle against the realities of existence.” As we can see here, Ellison’s concept of soul is born from the conjunction of tragedy and comedy; it skates and slides between the two like the careening legs of James Brown, carrying us from the Apollo Theater to the church, from barrelhouses to the bedroom. In the process—one of the many lessons of the resilient history of black music in America—it displays, even ﬂaunts, an existential toughness and ability to survive no matter the troubles it sees. It’s no wonder that Ellison speaks of an “apprenticeship” when educating us on soul: “Here it is more meaningful to speak, not of courses of study, of grades and degrees, but of apprenticeship, ordeals, initiation ceremonies, of rebirth.”

As an apprenticeship and initiation by ﬁre, soul cannot be achieved in a scholastic manner; it requires the kind of verve, daring, courage, resilience, and shrewdness shown by the main character in Ellison’s Invisible Man. Though the protagonist is a scholarship recipient, his real education occurs outside the walls of the university, in the course of the numerous “battles royal” and contests of nerve that mark his life. He ends up living in an underground room—he speaks of being “clubbed into the cellar,” in point of fact—and must ﬁnd his voice and perspective in this conﬁned basement.

The narrative begs for allegorical elaboration. Whether one is driven into the underground like this young man or ingested by a whale like Jonah, Ellison implies that being black in America automatically puts one in the darkest dungeons of life, so that the gestation of soul will have to occur in Sheol-like spaces, in the face of death. Thus, there is a sepulchral or mausoleum-like quality to the cellar that Ellison’s invisible protagonist must enter and endure before he can be reborn, as if he were a seed that must fall and sink into the earth before germinating and blooming. (Early Christian baptisteries were shaped like mausoleums with this exact logic in mind.)

Besides possessing this phoenix-like ability to raise black lives from the ashes, Ellison’s concept of soul also casts a dark shadow over the American psyche. By speaking from the American underground, Ellison adds a blues-like color and prophetic edge to his concept of soul; it is a force of dissent against vain and jingoistic versions of American greatness. Ellison’s “soul” is not unlike biblical understandings—vital spirit, life force, or essential self—but he clearly adds the particular shibboleths of black history and culture to the religious account. Consistent with many romantic portraits, “soul” is accordingly a vital spirit and life force but now applied to African American traditions, a symbol of the “spirit of a race,” to quote José Vasconcelos (1882–1959).

“Ellison sought to add black experiences and black vernaculars to the table of American literature, elbow to elbow with the boisterous multitudes.”

Seen as the tragicomic attitude of African American culture (blending high and low culture, as well as the sorrowful and hopeful, in black history), the constitution and complexion of soul in Ellison juxtapose a variety of incongruent fragments. At times, his emphasis falls on the comic ingenuity and spiritual resilience of black culture, its indefatigable spirit of resistance; at other times, he invokes the tragic sense as homage to the deﬁning impact of woes and griefs on the black experience in America.

Faced with American refusals to recognize past and present wrongdoings, Ellison invokes tragic features as a way of placing the unperturbed conscience of America on trial, dragging it in front of a jury and marking it in bloody red. In lieu of scarlet letters, though, Ellison etches the American soul with burning crosses, dark shadows, and foul crimes, all with the aim of blackening the simple daylight of American narratives. He had learned enough from his Calvinist fore-bearers to know that sin was aggressive and implacable, that the wolf, the snake, and the hog were not wanting in the American soul. And he had also learned what many Puritan divines were reluctant to acknowledge: that even the Christian story could be conscripted in campaigns of prejudice and violence and be employed in the service of wolﬁsh ends; that our country had the potential, to quote Harriet Beecher Stowe, of being ruined by pious white people.

However, Ellison thought that once these sins and tragedies have been confronted, America can become worthy of its highest ideals, that America can give birth to a democratic code that graces and digniﬁes the most abased souls. This dream was built from the same theological stuff as Herman Melville’s vision:

If, then, to meanest mariners, and renegades and castaways, I shall hereafter ascribe high qualities, though dark; weave round them tragic graces; if even the most mournful, perchance the most abased, among them all, shall at times life himself to the exalted mounts; if I shall touch that workman’s arm with some ethereal light; if I shall spread a rainbow over his disastrous set of sun; then against all mortal critics bear me out in it, thou just Spirit of Equality, which hast spread one royal mantle of humanity over all my kind! Bear me out in it, thou great democratic God!

In ascribing high qualities and exalted graces to the meanest lives, Ellison followed Melville’s precedent, but with an obvious concern for black castaways and renegades in American life. He, too, used words and lyrics to spread a rainbow over all of God’s creatures, especially those who have only known the deluge, only the “disastrous set of the sun.” He aimed for a wholly American style of writing, mingling the high and low and digniﬁed and colloquial speech.

Just as the American Renaissance adopted popular idioms, especially the religious rhetoric of the revivals, Ellison sought to add black experiences and black vernaculars to the table of American literature, elbow to elbow with the boisterous multitudes, the roughs and rowdies of this New World. He wanted to play the game “dozens” with American literature and bring “cursing vocabularies,” “exalted praying,” “shouting and playing the blues,” and even “the limping walks affected by Negro hustlers” to a broader, more widespread audience. He wanted to celebrate the “rich babel of idiomatic expression” and wordplay of young black kids, which “would make the experimental poets, the modern poets, green with envy.”

Though Ellison was referring to a wide variety of black language arts—from the blues and various proverbs to preaching and street idioms—we might take his statements as an eloquent prophecy of what was to come in rap music. He was speaking of the linguistic ingenuity—“shit, grit, and mother wit”—that matured and incubated in the heat of “dismembering pressures.” He was also talking about the moments of creativity and transcendence that can be won on the battle lines when the enemy seems close to victory. In short, he was referring to the grace to be discovered in the grinding teeth of tragedy:

Any people who could endure all of that brutalization and keep together, who could undergo such dismemberment and resuscitate itself, and endure until it could take the initiative in achieving its own freedom is obviously more than the sum of its brutalization. Seen in this perspective, theirs has been one of the great human experiences and one of the great triumphs of the human spirit in modern times. . . . So, let’s not forget that the great tragedies not only treat of negative matters, of violence, brutalities, defeats, but they treat them within a context of man’s will to act, to challenge reality and to snatch triumph from the teeth of destruction.

“Soul” in Ellison’s writing is the bravura or elegance or panache that emerges from these triumphs over suffering; for him, black music was one of the ﬁnest examples of this capacity. By parlaying threadbare opportunities into cultural achievements of the highest order, black musicians would become quintessential exemplars of the soul’s ability to resuscitate itself after experiences of degradation and death. 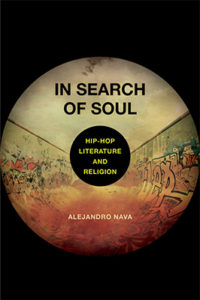 Adapted from In Search of Soul: Hip-Hop, Literature, and Religion. Used with permission of University of California Press. Copyright © 2017 by Alejandro Nava.

Alejandro Nava is Professor of Religious Studies at the University of Arizona and author of Wonder and Exile in the New World and The Mystical and Prophetic Thought of Simone Weil and Gustavo Gutierrez. 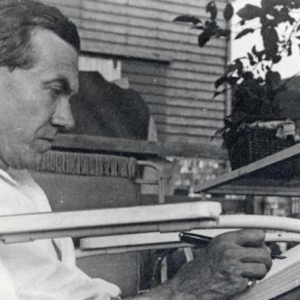 Armistead Maupin on growing up gay in a proud southern family. | Literary Hub All memoir titles should be Fleetwood...
© LitHub
Back to top
Loading Comments...