"I could tell Lewinter, they are not so very different after all."

Via W.W. Norton and Company
By Rachel Careau

Before I began translating Chéri and The End of Chéri, the French writer Colette’s pair of brilliant novels about the love that binds an aging courtesan and a very beautiful, much younger man, my experience as a translator had been narrow but deep. Off and on, over a period of more than twenty-five years, beginning when I was in graduate school in 1989, I had wrestled with the work of a single author: the Austrian French writer Roger Lewinter.

My translations of Lewinter’s books Story of Love in Solitude and The Attraction of Things were published by New Directions in 2016; I translated a third volume, comprising four shorter texts, for my National Endowment for the Arts Literature Translation Fellowship, in 2019.

Over the years, I have gained an appreciation for the unique set of demands that Lewinter’s writing places on a translator: a respect for the ordering and disordering of words and phrases, their articulation and disarticulation; for the peculiar placement and eccentric pairings of his punctuation; for the precision and intricacy of his syntax; and for the rules of his highly individual forms.

The source of the greatest challenge in translating Lewinter has always been his acrobatic syntax, and nowhere is this syntax more astounding, and confounding, than in qui  —dans l’ordre  —au rouge du soir—  des mots— [who  —in the order  —in evening’s red glow—  of the words—]. (1998), one of the four texts in my NEA Fellowship volume. This slight book of a mere ten pages entails the formal “disarticulation,” or disjointing, of a single, unending sentence by means of interpolated clauses or phrases set off with dashes—that is, clauses or phrases that are parenthetical to, that interrupt, what Lewinter calls the “‘load-bearing’ clause.”

His functional innovation, the asymmetrically spaced dash, made it possible for multiple interpolations to nest one within the other, creating a structure that I came to visualize, as I worked on the translation, as a series of inverted ziggurats. Further complicating the text is Lewinter’s use of hyperbaton, the deliberate disruption of idiomatic word order.

It would be hard to find a writer more different from Lewinter than Colette, in personality, subject matter, and style.

Such a form brooks no imprecision: “If there is an unnecessary word, a filler word, the sentence cannot move forward,” Lewinter has said in En cours de phrase, a collection of interviews from 2002 (translation my own).

What strikes me as tiresome in prose, independent of the arbitrary aspect, which is something else again, is padding. In a novel, three-quarters of the words are there so that the clauses will be complete, but it doesn’t mean anything. It’s as if there were a semiprecious stone and then an extremely heavy setting. You really have to cross vast zones of nonsense.

When I told Lewinter that I would be translating Colette, in my memory he let out a chuckle. It’s true that it would be hard to find a writer more different from Lewinter than Colette, in personality, subject matter, and style: he intensely private, she sometimes scandalously public; his subjects metaphysical, spiritual, arcane, hers earthy, physical, relational; his style syntactically complex and self-evidently literary, hers unfussy, economical, and antiliterary. In our phone conversation, Lewinter expressed a lack of affinity for her work. I reminded him of the one thing I could point to that they had in common: they were both devotees of the flea market.

That description of Colette’s style—unfussy, economical, antiliterary—belies the difficulty of translating her work. By “unfussy” I don’t mean unconsidered, and economy and simplicity are not the same thing. A style that is unfussy and economical requires the utmost skill in the choice and arrangement of words. And an “antiliterary” style, a style that is more colloquial than formal, poses challenges—such as the handling of contemporary slang—that more literary works do not.

The challenges of translating Colette’s work lie not in her syntax, which is for the most part straightforward: she did not savor composing sentences in the “elaborated syntactic pyramids” of Proust (in Lydia Davis’s words), or in anything resembling Lewinter’s inverted ziggurats. Her pleasure apparently lay elsewhere, in finding the mot juste, in stripping away the “padding” to say what she wanted to say with the fewest possible words.

So in this way, I could tell Lewinter, they are not so very different after all: shunning the “extremely heavy setting,” she presents us with the gem. And therein lies one of the difficulties of translating her work.

A style that is unfussy and economical requires the utmost skill in the choice and arrangement of words.

Colette, in her writing, often left out words that weren’t strictly necessary—conjunctions like and, and relative pronouns like who and which—as well as adjectives that might overembellish and slow down the prose, so that her sentences can feel bare-boned, a bit jagged, a bit syncopated. In translating her work, as in translating Lewinter’s, I have tried to reproduce her sentences as they are, striving to respect the order of their words and phrases, and to respect their omissions—striving not to pad.

One example will serve to illustrate what I mean by respecting the order of words and phrases and not padding the text. Here is Colette, from La fin de Chéri:

And here is my translation:

A torrent of events, a tide of exhausted regrets and trivial resurrections distilled with a vocero singer’s skill, washed over Chéri.

In Colette’s original French, as in my translation, the sentence begins with un flux (a torrent) and une marée (a tide), which together form its subject; the main verb, baignaient (washed over), falls at the end of the sentence, just before the direct object, Chéri. Roger Senhouse, in his 1951 translation, inverts this order and bloats the sentence from the 21 words of Colette’s original French (and my translation) to 28, adding a prepositional phrase and an adjective (he appends “perfect” to “flood”) and expanding to two nouns (“ease and rapidity”) Colette’s single noun habileté (skill):

Chéri was deluged with a perfect flood of incidents, a tide of bygone regrets and harmless resurrections, all declaimed with the ease and rapidity of a professional mourner.

Senhouse also loses the vivid particularity of that rare word, vocératrice, meaning one who sings a vocero, a Corsican funeral dirge sung for a victim of murder and calling for revenge—which leads me to another source of difficulty in translating Colette.

Colette had a gloriously broad vocabulary, replete with slang words and argot, specialized and technical terms, usages rare and classical: bec de gaz, more familiarly meaning “a gas street lamp,” but also argot for “a major, unforeseen obstacle” (être bec de gaz likewise means “to fail”); greffier, meaning “a court clerk,” but also a slang term for “cat”; battu de l’oiseau, a specialized term drawn from falconry, used to describe the quarry beaten by the falcon’s wing and thus overcome, but figuratively used to mean “having lost one’s courage as the result of a series of setbacks,” according to Le Littré.

Now I fancifully like to imagine them, Monsieur Lewinter and Madame Colette, visiting the flea market together, searching for their treasures, walking arm in arm.

Uncommon usages and expressions like these can easily trip up a translator, and translating them requires some ingenuity, especially in the case of contemporary slang and argot, most often used in dialogue. Take, for example, bec de gaz: Colette used it in La fin de Chéri, in the exclamation “Ah! là là, mes enfants, quel bec de gaz!” The words are spoken by the Girlfriend, the elderly prostitute who keeps watch over Chéri in his final days; she is colorfully describing Chéri’s former lover Léa’s firmness in front of a character named Mortier, who was trying to get something out of Léa that she did not intend to give. Senhouse translated this as “Oh! la la, my pretties, what a donkey he made of himself!”—falling wide of the mark. To make a donkey of oneself means “to behave foolishly”; but what Colette meant was that Mortier had been frustrated in his aims by a formidable obstacle, namely Léa, and that he had failed.

Once I’d discovered the meaning of the term, it took me some time, casting about, returning to the problem again and again, to find the expression to split on a rock, which means “to fail, to err fatally, to have one’s hopes and designs frustrated.” In addition to capturing Colette’s meaning perfectly, the phrase was current at the time that La fin de Chéri was written, having appeared in Webster’s Revised Unabridged Dictionary in 1913—a requirement for me, since I wanted to avoid anachronisms in the translation. My own translation of the exclamation, then, is “My goodness, boys and girls, was he split on a rock!”

In June of 2012, I had planned to visit the Plainpalais flea market with Lewinter on the last Saturday of my stay in Geneva. We arranged to meet beforehand at the Café-Sandwicherie du Théâtre. I arrived at the appointed time, but he came late. His mood seemed sour. He sat, quickly downed a ristrette (a tiny, very strong black coffee), and then abruptly departed. I waited nearly an hour, not knowing where he had gone or whether he intended to return, before I left and went back to my hotel.

He phoned, we had a contretemps, and by the time we had resolved our differences it was too late, the market was closing up for the day. I regret having missed what was, it turns out, a unique opportunity, for after forty years of visiting the Saturday flea market, Lewinter no longer goes.

Colette and Lewinter never met. When he arrived in Paris in 1948 or 1949, he was a boy of seven, and Colette was an arthritic, bedbound old woman of seventy-five. As a child he would visit the Louvre alone on Thursday afternoons, where he would linger each time in front of Leonardo’s The Virgin of the Rocks, drawn by the smile of the angel, while Colette lay in her apartment in the Palais-Royal, just a few blocks away. Now I fancifully like to imagine them, Monsieur Lewinter and Madame Colette, visiting the flea market together, searching for their treasures, walking arm in arm. 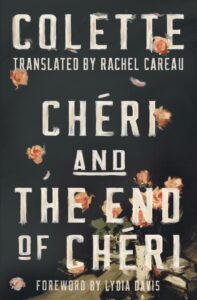 Chéri and The End of Chéri by Colette, translated by Rachel Careau, is available from W.W. Norton and Company.

Rachel Careau is the recipient of a 2019 National Endowment for the Arts Literature Translation Fellowship. Her translations of Roger Lewinter’s Story of Love in Solitude and The Attraction of Things were published by New Directions in 2016. Her writing and translations have appeared recently in BOMB, Harper’s Magazine, Literary Hub, Plume, and Two Lines. She lives in Hudson, New York. 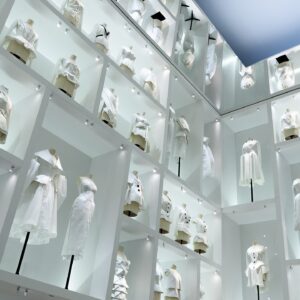 Jade Beer on How a Dior Exhibit Lead to Her Latest Novel London, 2017. Lucille will do anything for her beloved grandmother. So when Granny Sylvie volunteers to send her to Paris...
© LitHub
Back to top
Loading Comments...