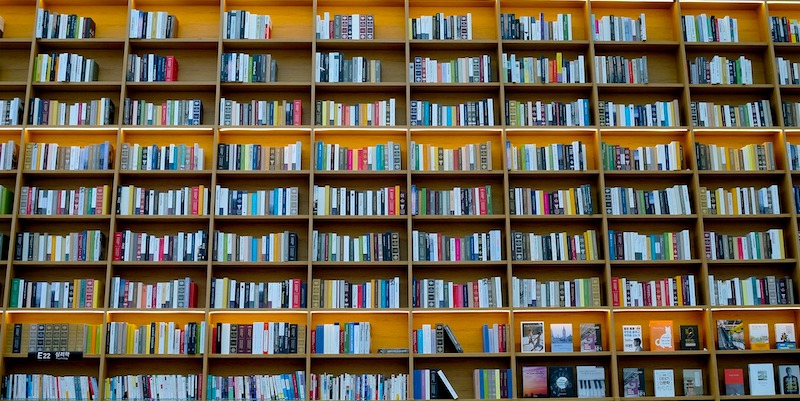 Students Weigh in on Their Favorite Titles

I dislike book lists and I used to think that I hate end-of-year lists most of all, but not anymore. Thanks to The New York Times’ latest list, I can now say that I loathe lists of all-time best quite a bit more than end-of-year ones.

Yes, my middle name is Grumpy.

Unfortunately, a certain editor still has naked pictures, so once again I must provide some facsimile of an end-of-year list.

I’ve been teaching at the University of Virginia this last year. My MFA class was primarily about forms and structures of novels, and it included a variety of great books. Instead of my providing a list this year, I thought I’d let my students do it for me. I might be new to academia, but I did read the memo about getting the credit while having graduate students do all the work.

Without further ado, here’s a list of the University of Virginia MFA’s favorite novels from the class: 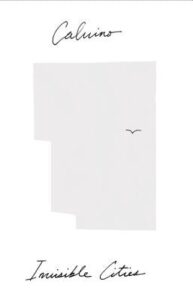 When reading Calvino’s Invisible Cities (or Calvino-period) I think of everything else. Remedios Varo paintings. Borges, Hejinian, Duras. I think of his other work—essays on Lightness, Exactitude. Through these so-called “cities” (designed by desires, fears, memories, symbols, the dead) you find your own way. Labyrinthian, radically “open,” choose-your-own-adventure? Read it backwards, who cares. Jump; fall in love.  –Jana Horn 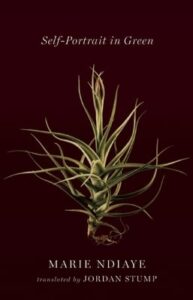 Self-Portrait in Green is the portrait of a small town that loses its purity and dies, thereby turning everything and everyone green. The green devours whoever resists it and gives a fleeting shimmering new life to those who embrace it. Katia Depetiteville, the mystery woman in green, is indistinguishable from her surroundings. “Because it was in front of her house that I saw her each day, for a long time I couldn’t distinguish that green presence from her surroundings.” The primarily female name, Katia, is of Slavic origin that means pure and “de petite ville” translates from French to English “small town.” Hence the mystery and death of the woman in green—Katia Depetiteville—is the mystery and death of a pure small town. The multiplicity of possible interpretations of this woman’s intent and effect on the people of the town and its environment is echoed in the novel’s shifting focus on friendship, family, the education system, and the rising Garonne as green permeate through these social structures and natural ecosystems.  –Nana Nyarko Boateng

Part ghost story, part family novel, part self-examination… An amazing novel of unanswerable questions, mysterious and innovative—N’Diaye is a genre-bending genius. Self-Portrait in Green greets you with an intimate, conversational narrator who keeps you grounded throughout the weird, murky greenness of its scenes. Compact and careful at just over a hundred pages, it’s a book you can swallow in an afternoon, but you’ll never solve its riddle. Freaks only.  –Kathryn Holmstrom 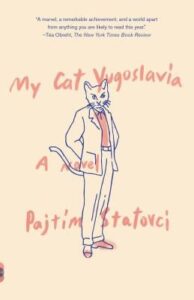 A compelling, yet unalienating tale, Statovci’s My Cat Yugoslavia circles around the drain of political conflict, generational trauma, and refugee narratives all in a package of family, fable, and farce. Between Kosovo and Finland surrounding the Kosovo War, two imperfect characters are begrudgingly woven together along with talking cats, boa constrictors, and an almost anthropological-level study of marriage customs and culture. This book shook me to my core this year, being both melancholic and just plain weird, and provided one potential answer to how we bottle up this maddening thing called real life.  –Coby-Dillon English 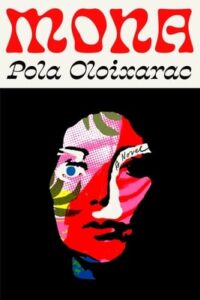 Mona is refreshing, most immediately, for managing to take the literary “establishment” to task without ever feeling like an in-joke. It posits that at its best, and most honest, literature is capable of just about anything – but what is truly worth exploring about a book, or a person, cannot be relayed succinctly by way of an award or fellowship or, indeed, a blurb on Lit Hub. This is one of those deeply honest books: brutal, hilarious, and not a little dangerous. “Come thirsty,” it opens, “and bring an appetite for Nordic delicatessen!” Other appetites it satisfies may or may not include: a hunger for fables, for sex-via-Zoom and sex-IRL, for over-prescribed(?) protagonists, and perhaps—if you’re feeling bruised by our increasingly absurd times—tsunami-to-the-face catharsis.  –Nial Buford 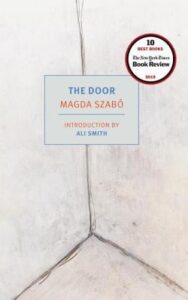 Not unlike experiencing Rabih’s forms class, reading The Door was like stewing in a parabolically relentless fever dream which will, after it has run its course, leave you considering who among you is truly of merit. Szabó reminds us that to be human is to be a hoarder of faddish beliefs, and how, like unused junk behind long-locked doors, those beliefs pile. Pitting labor against the intelligentsia who wield narrative power, the women of The Door examine the heaviness of loyalty in this nigh-fable. Should you be searching for a pleasant wrap-up, you will not find it here.  –Katherine Cart 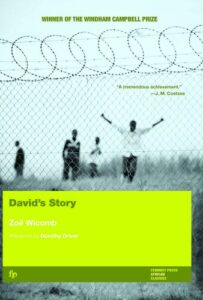 This book examines, unflinchingly, South Africa’s emergence from apartheid, but somehow without straying onto the soapbox, without bending the narrative around political allegiance. It teaches you complex history without ever becoming didactic. Instead, it penetrates the deepest narratorial questions—Is a true account of anything possible? What are we doing when we claim to be writing one?—through a combination of grandiose generational epic and stunning private moments. I will never forget the scene of David’s wife ironing his clothes, running her thoughts (and mine) back and forth, back and forth, over the confounding threads of David’s story.  –Gahl Pratt Pardes 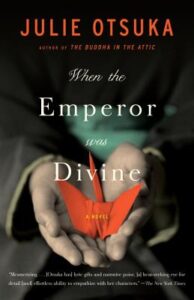 Julie Otsuka, When the Emperor Was Divine
(Anchor Books)

Deceptively simple, in crystalline prose. On one level it’s a history of Japanese-American internment during World War II. On another, it’s a family story: a missing father, a mother’s flight, a brother finding his childhood as his sister loses hers. When the Emperor Was Divine is told through image and absence: horses, deserts, the objects you bring when you leave your life behind. Through the eyes and memories of each family member, the images recur and recombine, creating new unstated meanings—things you can’t unsee—until you realize that each has been changed forever.  –Derick Olson 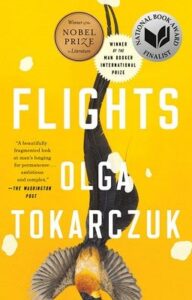 In Flights, Tokarczuk is not concerned with linearity, its restrictive binds, its phony polishedness. Instead, she has written a novel which hopscotches through time and space and content—it is endlessly mutable and rich. Visualizing the book from above, I see it as an archipelago—a collection of vignettes like a constellation of islands sharing tidal waters, each subtly affecting all the neighboring islands’ currents. Despite lacking a strictly linear form, this is a book full of enchanting, overlapping stories circling around travel, networks, the body, distances, love, legacy, phantoms, whales, immortality, islands, and more. Flights left me with the sense of being full, of wholeness, despite the fragmentation of the whole.  –Sophia Zaklikowski 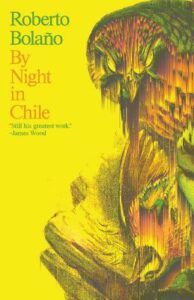 If Marx claimed with his last words that last words are for fools who haven’t said enough, then Father Urrutia is the greatest fool of them all in Bolaño’s manic masterpiece of a deathbed confessional. A book of contradictions: one singular night containing a lifetime, a taunting wizened youth dying and being reborn, a critic critiquing criticism, a priest teaching communism to Pinochet. This guilt-induced recollection containing only one line break and flooded with urgently sprawling sentences filled me like the very tasty, very flavorsome bread Bolaño describes: a treat for the palate, veritable ambrosia, pride of our agriculture, hearty staple of our hard-working farm folk, mmm, nice. Give yourself your own little treat and read this aloud while pacing back and forth in the prison of your own design.  –Laura McGehee

Two novels on the syllabus not mentioned but happen to be masterpieces nonetheless are Speharad by Antonio Muñoz Molina and The Twyborn Affair by Patrick White.

Now, get to reading and I’ll give you an A.

Rabih Alameddine is the author of the novels Koolaids, and I, the Divine, The Hakawati, An Unnecessary Woman, the story collection, The Perv, and most recently, The Angel of History. He divides his time between San Francisco and Beirut. 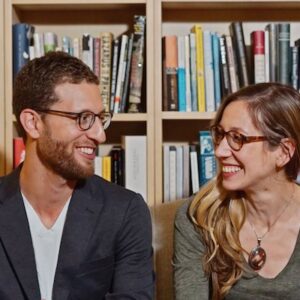 Transit Books, based in Oakland, California, is now in its sixth year of publishing books that push the boundaries of form,...
© LitHub
Back to top
Loading Comments...