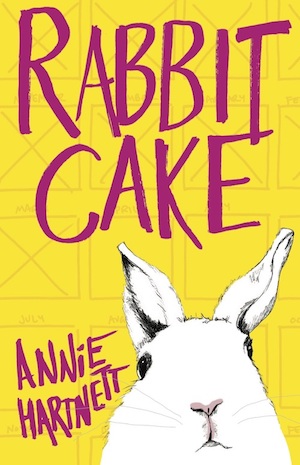 The following is from Annie Hartnett's novel, Rabbit Cake. Annie Hartnett is a 2013 graduate of the MFA program at the University of Alabama, and was the 2013-2014 Writer-in-Residence for the Associates of the Boston Public Library. She currently teaches classes on the novel and the short story at Grub Street.

It was August when Mom’s body finally showed up, caught in the dam at Goat Rock, twelve miles from home. She had floated across the state border to Georgia, so Dad had to fill out extra paperwork to bring her back to Freedom, the town where we live in Alabama. I wonder sometimes how many miles Mom swam before she drowned; she could hold her breath underwater for a long time. She was an excellent swimmer in her sleep.

We’d already known Mom was dead, of course, we’d felt it for most of the summer. We felt it from the moment we found her swim goggles on the bank of the Chattahoochee River, at the beach down the road from our house, the place where Mom swam. There had been flooding that June, the river running fast and lathered up.

At the police station, two officers took Dad away first to ask him questions, just to be sure he hadn’t killed Mom and dumped her in the river. It didn’t occur to Lizzie or me then that we might be suspects. It was two years ago; I’m twelve now, but I was still only ten then. Lizzie was fifteen and most people thought she was too pretty to hurt anyone, unless you knew her well enough to know better. The police officer already knew Lizzie.

“Aren’t you sad?” the cop asked, handing my dry-eyed sister a Kleenex.

“How did you know?” He jabbed his finger at Lizzie, almost touching her nose.

“She’s our mother,” Lizzie said, her hands on her hips. “If your mom was dead, wouldn’t you know?”

I guess that was good enough, because they let us go, and ruled Mom’s death an accident.

“Not much of an investigation,” I muttered, but Dad shushed me up.

It didn’t feel like a case closed, no matter what the Freedom Police Department said. I combed our house for a clue.

“She was a sleepswimmer. She drowned,” Dad tried to reason with me, as I rummaged through his bedside table again. “What else is there to know?”

There was a lot left to know. I wondered what my mother’s dreams were about the night she drowned. Did she wake up when the river water filled her lungs or was she still asleep when she died? Did she dream in color or did the water look black as tar?

After we left the police station, we drove to the coroner where Mom was being kept. Dad went back into the morgue, leaving Lizzie and me in the waiting room. He came out a few minutes later, dabbing his eyes, and told us he’d have to go fill out more forms before we could leave.

As soon as he was out of sight, my sister pulled me down the hall by the hand. She said we needed to move quickly if we were going to see Mom. There were signs everywhere that said No Food and No Photography, but Lizzie was snapping photos with her cell phone anyway with the hand that wasn’t holding mine.

Lizzie and I had never held hands before, at least not as far back as I could remember. We weren’t those type of sisters. All Lizzie ever wanted to do was sneak out of the house and drink cans of beer with her friends. I’d also overheard her talking on the phone about eating mushrooms in the woods and I wondered how Lizzie knew which ones were edible and not poisonous.

We could see the top of Mom’s head, but her face and body were covered by a white sheet. Her hair fell over the edge of the metal table like a waterfall. I didn’t want to see the rest of her body, even if Lizzie did; I didn’t want to know for sure what the fish in the river had done to her. I’d read that eye tissue is soft and easy to eat. I leaned forward and gagged over a yellow mop bucket.

“No kids back here,” a white-coated man said. He was holding up a tiny metal knife. “Where are your parents?”

“That’s our mother.” Lizzie pointed to the sheet. I wiped my mouth.

“We were just leaving,” Lizzie said, taking one last photo. “Come on,” she said, grabbing my hand again.

When we looked through the pictures on the ride home, most were of the green tile floor, but Lizzie had gotten that one shot of the top of Mom’s head. We could see that Mom’s skull had been dented, probably by a rock in the river. I thought maybe she could have had a seizure that night in the water; that would explain why she had drowned when she was such a good swimmer.

She had had a seizure just once before. That seizure was supposed to be a one-time thing, but maybe there had been another. I wanted to know what had happened that night. Everything was terrible and uncertain without her.

Dad said there was nothing in the coroner’s report about a seizure, and he was sure that autopsies could tell those kinds of things. “It’ll always be a mystery,” Dad said, which was no comfort at all. “A freak accident.”

“Are you scared?” I asked Lizzie.

Sleepwalking is supposed to be genetic, a fifty-fifty chance. It had to be either my sister or me; Lizzie had lost the coin toss. Lizzie had started sleepwalking long before I was born, so it was always normal having two sleepwalkers in the house. I would wake up in the middle of the night to hear Lizzie tinkering downstairs and Mom waltzing down the hall. They never interacted in their sleep, at least not that I’d seen. Two ships passing in the night, Dad used to call them.

On the night of Mom’s disappearance, Lizzie had sleepwalked into the shower, curled up in the tub.

“Are you scared?” I asked Lizzie again, because she hadn’t seemed to hear my question the first time.

“Scared of what?” Lizzie asked, putting the cell phone down.

“You shouldn’t be talking about this,” Dad said. “No one is dying.”

“No one else,” I said quietly, because that was more correct. I knew not to push it any further, or Dad would get mad. I leaned against the truck window, my breath forming a mist on the glass. Then I tried holding my breath as long as I could, pretending I was drowning right there in the truck. It was actually a pretty good game.

Lizzie wasn’t a sleepswimmer, she was just a regular old sleepwalker, which didn’t seem that dangerous. The strangest thing Lizzie had ever done in her sleep was pee on the houseplants. Boomer always woke us all up when she did it, barking his head off; he knew piddling in the house was what bad dogs did. Once, Mom took a photo of Lizzie squatting over the potted ficus, and she lorded it over Lizzie at breakfast the next day. I’d told Lizzie not to worry, I’d read that alpha female wolves mark their territory by urinating, just like their male counterparts.

“Quit being such a freak,” Lizzie had hissed.

“She’s just embarrassed that she doesn’t remember,” Mom had said to me. “Don’t let her get to you.”

Mom often said that not-remembering was the worst part of sleepwalking. She believed dreams were important, a gateway to our past lives. Mom tried keeping a dream log, but she could remember the details of dreams only on the nights she’d stayed in bed. If she’d been out sleepwalking, she said, there was this big blank space in the morning where her dream should be.

When they’d first gotten married, Dad had to film Mom until she believed she was sleepswimming some nights. Back then, she sleepswam naked and her hair was dry by morning. “That doesn’t sound like me,” Mom had insisted, until Dad showed her the video clip. She had been so impressed with herself that she could do the butterfly stroke in her sleep, since she’d never been able to get it right when she was awake.

“Must have been a swimmer in a past life,” she’d declared. Dad used to insist that Mom shouldn’t believe in reincarnation because she had a PhD, but that’s why I had Elvis Presley’s name, even though I was born a girl. Dad always disliked my name, but he wasn’t there to sign the birth certificate, so he didn’t have a say in naming me. I came early, and Dad was away on business, at the annual carpet trade show. But I never thought Elvis was a bad name, even for a girl. All the teachers in school knew how to pronounce it.

“Her name is hardly the weirdest thing about her,” Lizzie snarled once.

Lizzie was named after Queen Elizabeth I, but Mom hadn’t really thought my sister was the return of the queen of England. Mom had only thought Queen Elizabeth and baby Lizzie had the same tall forehead, but it turned out Lizzie had an ordinary-sized forehead once her hair grew in. So Lizzie was always Lizzie, never Elizabeth, not to anyone. Sometimes Mom would say my sister had Lizzie Borden’s former spirit, and that she and Dad had better watch out.

Mom had been 100 percent convinced I had Elvis Presley’s hand-me-down spirit. I shared the same birthday with the King of Rock and Roll, January 8th, and that was enough proof for Mom. Elvis had been dead for a long time, but she said some spirits take a break before they come back around. “Like a time-out,” Mom explained. “A good kind.”

It was Mom’s psychic, Miss Ida, who had taught her about reincarnation. Miss Ida and Mom talked on the phone every Friday. I’d never met Miss Ida; Mom explained that she had become something called agoraphobic in her old age, and she couldn’t come visit us because she was too afraid to leave her own house.

“Isn’t there a crystal to cure that?” Dad had said.

Miss Ida had predicted that someday Mom would kill herself. She saw it in Mom’s leftover coffee grounds, all those years ago, when they first met in Miss Ida’s Crystal Shop in Arizona. Lizzie and I hadn’t been born yet.

Dad said we shouldn’t pay attention to that “New Age lunacy,” but Mom used to gently remind us of Miss Ida’s premonition often and it was hard to ignore. She wanted us to be ready, I guess. Both Lizzie and I took it to mean that Mom would commit suicide someday, although I thought she would wait to do it until Lizzie and I were much, much older, once we didn’t need her so much anymore.

The coroner’s report said accident, not suicide, and we thought that Miss Ida’s premonition had been wrong. We didn’t consider it back then, but there are tons of ways to kill yourself accidentally. Drowning is only one possibility out of a million.

From Rabbit Cake. Used with permission of Tin House. Copyright © 2017 by Annie Hartnett. 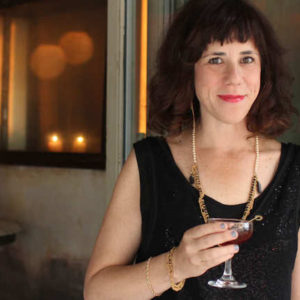 Jami Attenberg on Literary Break Ups, Credit Card Debt and Epic Book Tours Ed. note: the following profile alludes to certain plot points from All Grown Up, so proceed with caution. In 2010, the novelist...
© LitHub
Back to top