Victoria Blanco on the Stories We Miss By Focusing on Tragedy

In August of 2019, my husband and I drove across the Zaragoza Bridge, one of the connectors between my hometowns of El Paso, Texas and Ciudad Juárez, Chihuahua. Our trunk filled with cardboard boxes containing soap, deodorant, and sanitary napkins, my husband maneuvered the minivan around the barriers placed by Mexico to prevent guns from crossing into their country. We rehearsed the answers we would give to Mexican Customs agents’ questions about the supplies, should we be stopped: these are personal care items that are going to a migrant shelter in Juárez. Their total worth is $1,000 dollars. We are only crossing these supplies. There is no contraband in this car or on our bodies.

We crossed mid-morning, before the temperature rose to 100 degrees and my feet and legs swelled. At 30 weeks pregnant, I felt driven to bring these items, collected through the generosity of friends and strangers, to some of the women waiting in Juárez for their asylum claims to be processed under President Trump’s “Remain in Mexico” policy. The sun lay heavy on the dried Rio Grande, its water stymied by a dam in New Mexico. The fence loomed over the riverbed.

We crossed through Mexican customs without an interrogation. In Juárez, we drove by an American-owned factory where indigenous people assemble appliances bound for US markets for little compensation. We passed small businesses that pay weekly quotas to cartels, whose drugs are also bound for US markets.

Each time I’m in Juárez, I scan the sidewalks and intersections for Rarámuri women, an indigenous people of the Chihuahuan Desert who distinguish themselves by wearing bright, hand-sewn frocks and speaking their traditional language. As a child, I would see Rarámuri women in Juárez and admire their colorful dresses, which stand out amid a cityscape of factories and family-owned shops. I saw the women in their dresses as beautiful, even when the majority population, people of mixed race which include my family and many friends, complained about the Rarámuri peoples’ refusal to assimilate into Spanish and Western clothing. In casual conversations, they argued that indigenous identity impedes Mexico’s progress.

That morning, a Rarámuri woman in a brilliant red-and-white dress walked up and down the lanes of cars stopped at an intersection only a few blocks from the international bridge. When she reached our car, I rolled down my window. She held out her hand and said korima, a word that I understand intellectually as “reciprocity,” even as I know it means rivers running unbridled and a desert unmarred by factories and fences. She spoke softly and without looking at me directly in the face, but I recognized the power of her presence and the words spoken in her language on this trafficked street. This Rarámuri woman was practicing “passive resistance,” a term used in the field of anthropology to describe non-cooperation, often in forms that are misread as ignorant and stubborn by the dominant culture.

I couldn’t accept the fear and sadness that drove me away, so I kept returning to the Chihuahuan Desert.

By speaking the word korima to me, the woman was reminding me of her active relationship with this desert and its mighty river. I understood that the woman was resisting me and the violence my light skin and Spanish represent. I saw myself as arriving to Juárez to deliver aid. Her presence reminded me that she and her people protect this desert and welcome newcomers in a way that I never can.

In the sister cities of Ciudad Juárez and El Paso, there is ample evidence of the intertwined consequences of climate change and xenophobia. Since Trump used the construction of the border fence as a central campaign strategy, the world’s attention has turned to my home. Attention has only intensified in the wake of the recent mass shooting by a white supremacist targeting Latinx people. Environmental degradation and xenophobia have long met at the border, but I worry that as both have drawn more focus, the borderlands have become known as nothing more than an emblem of the violence and loss coming for the rest of the world.

I, too, once fell into the trap of seeing my home as a wasteland. While my Mexican family has long lived in the Chihuahuan Desert, we stopped telling stories of our indigenous ancestors, instead assimilating into a mainstream Mexican culture that prioritizes industrialization at the expense of environmental damage and the loss of indigenous knowledge. Over the last century, my family has watched the Rio Grande turn from full and fast-flowing to dry. For years, we have watched American-owned factories set up shop in Juárez and exploit the labor of indigenous migrants who arrive to this bordertown seeking refuge from the political and environmental violence in their own homes. I saw the steel border fence rise during one year of my young adulthood.

It was during this time that I began writing about home, as an aspiring essayist in college. I wanted to make sense of what I saw, and I hoped that writing my family stories would become a way to enter conversations about the climate crisis and xenophobia rapidly changing my home. But when I wrote, I often felt confined by the dominant narrative of this desert as barren, and its industrialized cities as a place you left and to which you never returned. I believed that this land and its people were too damaged, and that if I remained, I, too, would become irreparable. 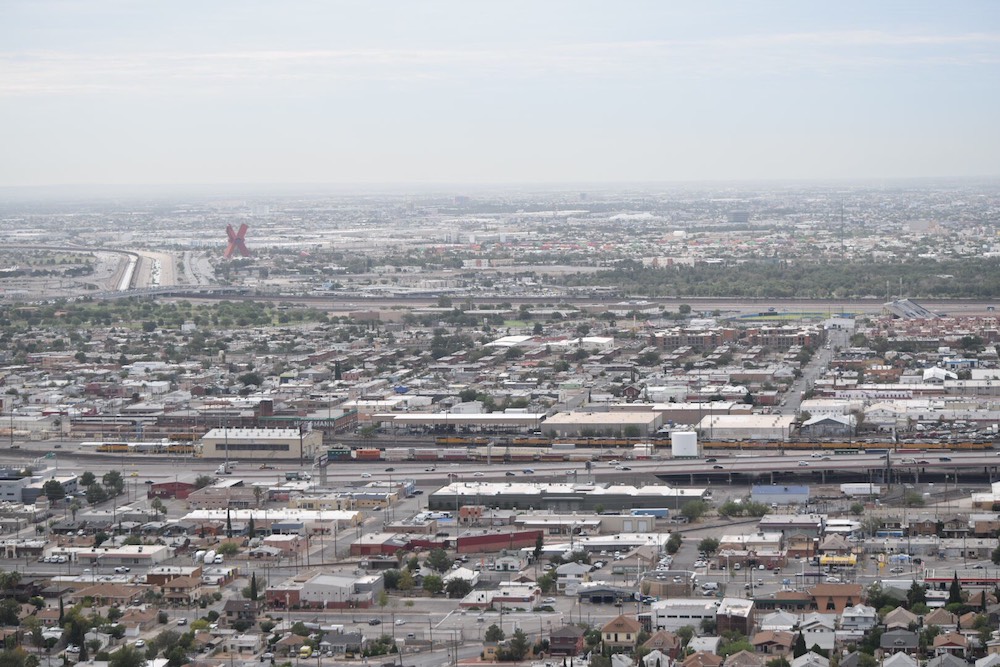 I couldn’t accept the fear and sadness that drove me away, so I kept returning to the Chihuahuan Desert. I felt that returning home and finding stories of resistance was the best way I could protest the violence that had already come to define this region for the rest of the world. In 2009, I moved to Chihuahua City, four hours south of the border, to collect the oral histories of Rarámuri people fighting the environmental destruction that displace them from their mountain homeland. I focused my field research on Oasis, the largest government-funded Rarámuri settlement in Chihuahua City. Thirty-five thousand people—half their population—have arrived to Ciudad Juárez and Chihuahua City, where they find ways to maintain their ancestral relationship with the land, like searching for herbs on the side of the road, running on pavement to feel closeness with the land, and refusing to use the stoves in their homes in favor of cooking over an open fire.

Initially, my thinking and writing focused exclusively on the violence wrought on the Rarámuri people and their land by centuries of the colonial project. I believed this was the “urgent” story, the story that “needed to be told.”

But framing a narrative around destruction failed to pay attention to the quiet and important ways Rarámuri people are actively fighting to center their values in this complex place we’ve come to know as the border. It’s easy to see signs of the apocalypse at the border and the many places it reaches, and to focus our narratives around this violence and destruction. The border is seductive because it is violent. But stories of loss fuel an anxiety that causes readers to look away and retreat into themselves. Stories of loss also risk making the people of the border look at our home and ourselves as unworthy of saving. No one can sustain relentless tragedy.

The Rarámuri people of Oasis taught me that upholding cultural traditions is an act of resistance against environmental destruction and capitalism. I learned these lessons through herb-seeking excursions in the city’s arroyos, places that most people never visit. I learned to identify edible herbs that I knew as weeds, and I learned to cook broths and brew medicinal teas that helped community members through their illnesses. I sewed traditional dresses and joined Rarámuri during traditional foot races, dodging traffic and ignoring insults from passersby.

I learned the importance and the challenges of upholding traditional knowledge despite displacement, poverty, and hunger. I learned that changing a society and maintaining a relationship with the natural world often takes the form of quiet, persistent work that easily goes unacknowledged.

Before I could acknowledge acts of passive resistance, I had to recognize and fight the internalized racism that made me see my home and my family as inferior. My concern now is doing justice to my home through my writing. How do I, a fourth-generation fronteriza, write towards healing the “herida abierta” that Gloria Anzaldúa so perfectly diagnosed in Borderlands/La Frontera: The New Mestiza? This is border speak for a question that all climate writers should be asking: how do I document loss and pain while honoring the local communities that are caretakers of the land and one another?

Perhaps stories of passive resistance inspire action because it is an approach we can all use.

Focusing on Rarámuri stories of passive resistance elicits the kinds of reactions I want from readers. I find that the Rarámuris’ stories of resistance mobilize others to continue caring, and to continue advocating for environmental justice. Indigenous peoples have always protected the natural world using a variety of strategies and tactics, some of which the world recognizes as overtly political and others which are deemed inconsequential. Some writers might argue that moments of passive resistance are details to embed in a larger story of environmental crisis. But focusing narratives on people who do the work of resistance, whether it be active or passive, make us examine the climate crisis in new ways, and summon the imagination and will to continue fighting.

Perhaps stories of passive resistance inspire action because it is an approach we can all use. Passive resistance requires that we live, on a day-to-day basis, in opposition to destructive forces. Our acts can be small, and they accumulate force through collection. I realize that our world needs large-scale, systemic change; but it also needs people who know how to recognize and support the quiet resistance that is happening in their communities every day.

At the migrant shelter in Juárez, I studied a framed map delineating the routes that most migrants follow to the border. I thought about being forced to leave home, and the strength it takes to make a home in a new place. I thought, too, about my own returns to the desert, about my border crossings, and how I have found the solutions for our collective future in the place and people I was taught to ignore.

As we drove home, I scanned the crowded sidewalk for a woman in an ankle-length red skirt. I knew she would likely spend her day at the intersection, asserting her presence and saying “korima” to anyone who rolled down their car window.

By late morning, the sun had released greater heat onto the desert floor. The dust lifted by cars shone in the light.

A couple blocks before we joined the line of cars waiting to cross into the US, I saw her standing in the shade of a storefront awning, gathering strength to keep going.

Victoria Blanco is a writer from El Paso and Ciudad Juárez. Her writing has appeared in The New York Times, Catapult, and The Texas Observer, among others.

'Tohunga,' a Poem by Tayi Tibble 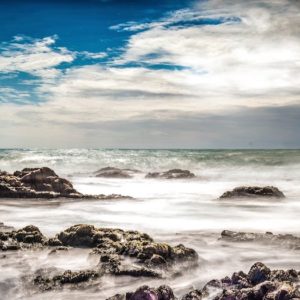