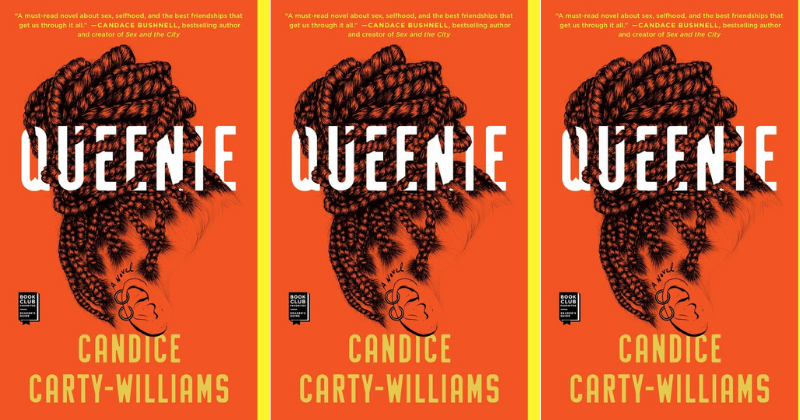 Queenie Jenkins is not your “black Bridget Jones.”

Since its publication, Queenie, the 2019 debut novel from Vintage senior marketing executive Candice Carty-Williams, has been repeatedly compared to Helen Fielding’s Bridget Jones’s Diary. Kirkus’s starred review called it “A black Bridget Jones, perfectly of the moment.” Entertainment Weekly echoed the praise and noted the similarities between Queenie Jenkins and Fielding’s endearing heroine: “It’s not hard to understand why Candice Carty-Williams’s Queenie has already earned breathless comparisons to Bridget Jones’s Diary: Both books feature endearingly messy heroines who careen from one bad decision to another and confide in the reader with the familiarity of a best friend—just swap journal entries for WhatsApp group chats.” Queenie, an Anglo-Jamaican newspaper journalist, certainly could commiserate with Bridget over messy situationships and unapologetic fuck boys while puffing on a vape pen. When her long-term white boyfriend Tom asks for a “break” (aka a drawn-out breakup), Queenie spirals. She leaves evidence of self-destruction wherever she goes.

But to say that Queenie is a millennial replica of Bridget Jones flattens the novel’s nuances into persuasive marketing copy. As Afua Hirsch wrote in a review for TIME, this comparison is meant to locate the novel in a certain generic sphere, one which doesn’t necessarily capture Queenie’s intersectional scope. Granted, Carty-Williams told The Guardian that the tagline was her idea: “I chose that—I was working as a marketer in publishing and I thought this was going to be a hard sell because there hadn’t been any books like it,” she said. Yet by her own admission, the comparison was born out of the need for representation. It’s no secret that the publishing industry pays lip service to “diversity” while upholding whiteness, from the authors to the industry’s employees. Queenie’s struggle with mental health, still somewhat of a taboo subject for the Black community, is what makes her so achingly relatable and of this moment in cultural history. The summer of 2020 coupled with the pandemic has pushed Black people to reconsider, among other priorities, how we protect our peace.

A key component of Queenie’s journey—in all its hapless blunders—is her mental health reckoning. At first, Queenie is resistant to therapy. After a few sessions with her therapist Janet, Queenie realizes that she carries years of unprocessed grief and trauma. During a therapy session, Janet acknowledges Queenie’s pain, and Queenie snaps in response, “It’s all right, it’s not your fault. These things happen. It happens a lot in my culture. Us black girls, we’re always meant to know our place.” Queenie’s response taps into a prevailing truth: white supremacy is a global phenomenon. She may be British, but the racist stereotypes that harm Black women are not unique to the States. The anti-Black caricatures of the Sapphire, the Mammy, the Jezebel, and the Angry Black Woman have deeply embedded themselves in Western society as a means of keeping Black women oppressed and devalued. And the stereotype of the Strong Black Woman is far-reaching, even fatal. Racial bias in medical care means that Black women’s pain is grossly underestimated or ignored.

To some extent, Queenie has internalized the misogynoir she’s experienced. It’s the reason why she only seems to attract energy vampires and carefully disguised bigots, and why she feels she doesn’t deserve better. Lord knows, Queenie’s horrific online dating experiences and interracial dating mishaps may hit readers a little close to home. Towards the end of the novel, she goes on a date with a guy dubbed “Balding Alpha,” who sneers at the Black Lives Matter movement, tells her Black people can be racist to white people, and takes pleasure in playing the “let’s-consider-both-sides” contrarian.

The scene gave me flashbacks. There was an older white man I used to “date” who wasn’t bald but thought of himself as an “Alpha,” and argued that the existence of Black billionaires like Oprah and Jay-Z meant that racism no longer existed. He said that because he didn’t come from a wealthy family and made just a little above minimum wage, he couldn’t possibly have “white privilege.” And of course, he didn’t see color. I stayed tethered to him for far too long because I didn’t love myself, let alone like myself. I had just climbed from the wreckage of a particularly bad breakup and like Queenie, I was too focused on proving my desirability instead of dealing with my pain in a healthy way. I couldn’t sever ties until I learned how to practice self-gratitude and self-respect.

Audre Lorde famously said, “Caring for myself is not self-indulgence, it is self-preservation, and that is an act of political warfare.” Capitalism and wellness culture may have appropriated this survival tactic to sell everything from Peloton bikes to Botox to Flat Tummy Tea, but Lorde’s original concept of self-care is still a radical choice for marginalized women. Black women are expected to be superwomen, denying our own mental, emotional, and psychological wellbeing for the good of other people. Even our “resilience” is weaponized against us, used as proof of inhuman strength. Black women are held to impossible double standards: we are expected to “save” everyone from themselves. Queenie challenges this expectation. She may be wounded, but she is not permanently broken.

There are so many different ways to be Black and to be a Black woman, but varied depictions have always been a struggle to find. In an interview with Shondaland, Carty-Williams eschewed the pressures of writing a “likable” character: “She makes a lot of annoying decisions and you want to shake her a lot of the time. Plus so many women, characters and in real life, are meant to be ‘nice.’ Why is that? I’m not interested in being ‘nice.’ What a boring descriptor.”

Recently, pop culture has coined a new feminine archetype: the Sad Girl. She probably likes The Virgin Suicides, Lana Del Rey, depression memes, and still lurks on Tumblr to reblog aesthetic posts that can only be described as soft-focus, pastel fever-dreams. She is almost always white and able-bodied, and most likely thin and conventionally attractive. The Sad Girl can never be a Black girl because according to widely believed cultural misconceptions and white supremacy, Black girls don’t experience depression. In this sense, Carty-Williams’s protagonist feels much more like a deconstruction of the Sad Girl than a response to Bridget Jones, or a faint reworking of Pride and Prejudice, which Fielding has cited as her inspiration. The heart of Queenie‘s narrative isn’t about coping with the ups and downs of the single life; it’s about self-liberation from the demands of, to borrow a term from bell hooks, a white supremacist capitalist patriarchy.

In writing and exposing Queenie’s flaws, Carty-Williams provides a layered portrait of Black womanhood. Black women can be strong, but that doesn’t mean strength neutralizes moments of human frailty. Queenie’s reclamation of selfhood is not dependent upon salvation delivered by a romantic partner, but the type of revolutionary self-care that Lorde advocated. Queenie, in all her triumphs and failures, shows the importance of banishing mental health stigmas.