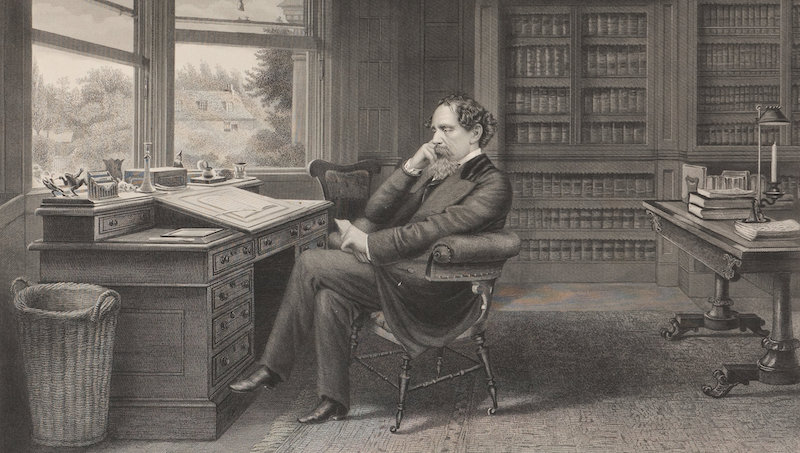 In the study at Gad’s Hill, the Kent country house where Charles Dickens lived for many years (and which is now a school), there is something that every dorky child dreams of: a door designed as a fake bookcase, complete with fake books.

A similar door was originally made for Dickens’ home in Tavistock Square, where he lived from 1851 to 1860; he loved it so much that he repeated the trick, adding even more books, when he moved to Gad’s Hill. (By the way, Gad’s Hill also apparently features (or featured) wooden benches that Dickens said were “made from timber from Shakespeare’s house in Stratford-on-Avon.” A house fit for a famous writer, indeed.)

Dickens himself came up with the titles for the fake books, and sent them all to his bookbinder, Thomas Robert Eels, to build, along with very specific instructions. Among them were Cat’s Lives (in nine volumes); Five Minutes in China (in three volumes); Drowsy’s Recollections of Nothing (in three volumes)​; Heavyside’s Conversations with Nobody (in three volumes); History of a Short Chancery Suit (in twenty-one volumes); The Wisdom of Our Ancestors (a series of seven: I. Ignorance, II. Superstition, III. The Block, IV. The Stake, V. The Rack, VI. Dirt, and VII. Disease); The Virtues of Our Ancestors (very narrow indeed); and many others.

“I should like the History of a Short Chancery Suit to come at the bottom of one recess, and the Catalogue of Statues of the Duke of Wellington at the bottom of the other,” he wrote to Mr. Eels. “If you should want more titles, and will let me know how many, I will send them to you.” His font of witty references was, as you might expect, endless.

Apparently, the trompe l’oeil door is extremely convincing; in my view it could only be better if he had to pull on one of the books to open the door. You know, like a villain. You can visit it for yourself on select weekends between April and October (currently disrupted due to Covid-19).