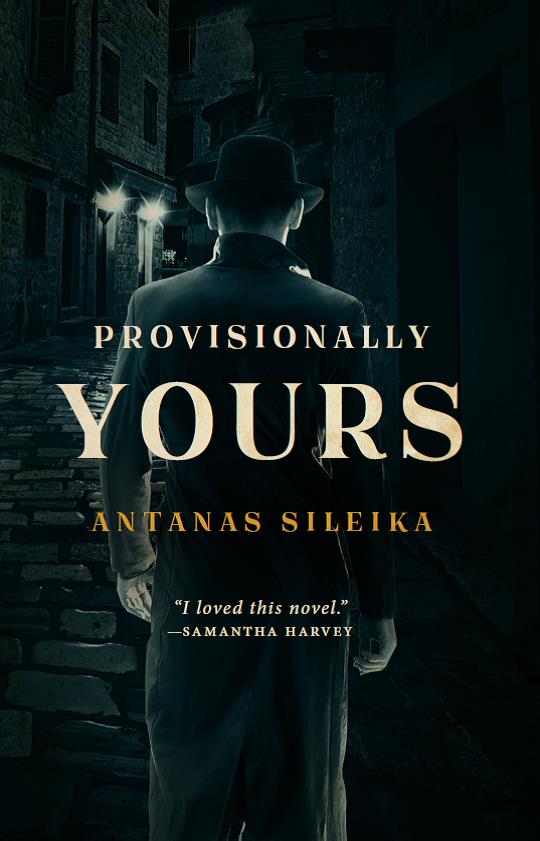 The following is from Antanas Sileika's novel Provisionally Yours. After World War I, former counterintelligence officer Justas Adamonis is recruited back into service, this time for the nascent Lithuanian government. He quickly finds himself ensnared in a dangerous web of political corruption and personal betrayal. Antanas Sileika is the author of five books of fiction and a memoir. He has been short-listed for the Toronto Book Award and the Leacock Medal for Humour as well as long-listed for Canada Reads.

The border guard studied the identity papers Adamonis had kept hidden through his escape out of shattered Russia, looking from his photo to his face, from his photo to his face. He told Adamonis to stay where he was on the train platform. Adamonis set down his suitcase and briefcase and pulled the collar of his woollen coat around his neck. The guard’s superior came back without the passport and asked Adamonis to follow him.

He took Adamonis into a cold office in the corner of the train station where an unshaven man sat behind a desk in a room with a stove but without heat.

Adamonis could see his own breath and his interrogator kept on his coat and hat throughout the interview, taking many notes with a pencil that he stopped to sharpen with a penknife when the lead wore down. The man asked about Adamonis’s career in great detail—called up for service in 1912, accepted into military school, moved to the Austrian front at the beginning of hostilities. Assigned to signals.

This last detail pricked the interest of the plainclothes-man. Adamonis knew all about interrogation, and he listened to the questions with admiration as the interrogator followed the thread of Adamonis’s military career in signals to his years in counterintelligence until the army collapsed and split into the red and white factions. This story could have got him shot a month ago back in Russia, but now he was in a place where he could tell the truth. At least he hoped that was so.

The interrogator asked him to wait outside among the exhausted families and ragged men in the waiting room.

“Another one comes eventually. Maybe you’ll get that one.”

There was nothing to eat in the waiting room, a big hall in the Obeliai border station half-filled with cloth bundles upon which men, women, and children slept while they waited to clear customs and quarantine. Some never would. Adamonis sat on the end of a bench and took a piece of sausage out of his bag, and a boy was beside him as soon as he cut off his second slice. Soon there were two more children and his food was gone before he could taste another bite. He tried to go outside to smoke, but a guard stopped him at the door and directed him to a smoking room where he had to roll two cigarettes for others before lighting up his own.

Three hours later, the guard called him back into the room. Coal had found its way into the stove and a glass of tea and two biscuits as well as his passport were sitting on Adamonis’s side of the desk. His interrogator came around from behind his desk, introduced himself as Lieutenant Oleka, and saluted.

“Welcome home, General,” said Oleka. “I wonder if I could ask you a few more questions.”

“No need to salute, Lieutenant. I’m not exactly in the army any longer. And I’d be happy to answer your questions.”

The next morning, the whistle blew and the locomotive began to jerk forward, leaving behind the barn-like customs station with its hopeful or crestfallen men and women. One more hurdle overcome, and all in all, not the hardest one.

The window beside him had frost creeping out from the corners and the fields beyond were covered in snow. At least the carriage was warm, crowded as it was with Lithuanians fleeing Russia. There had been thousands of them scattered across the country, soldiers in the czar’s army, bureaucrats and labourers, all going home now that the old czarist world had collapsed and the maw of the revolution was devouring so many. He was in a carriage with the lucky ones. He’d narrowly missed being shot along with all the officers on a ferry crossing the Prut River in Romania. On a flatbed train car he was denounced as bourgeois, so Adamonis had pushed the accuser and watched him fall under the severing wheels. The Soviets were especially bitter about having lost their war with Poland only months earlier. Anyone who chose to leave was a traitor to the cause.

The word home felt like the promise of a warm bed on a cold night. But what kind of a home would it be for Adamonis? His parents were dead and only his sister still lived in Kaunas, and when he’d last seen her, she’d been a teenager. As for the country, it had successfully fought off the Reds and the German Freikorps, but lost its southern part to the Poles. Technically, Lithuania was still at war with Poland, and that had made it all the more complicated to return from shattered Russia, forcing him to head north, skirting Poland to enter the country through Latvia.

Adamonis was tired and could let himself feel it for the first time in a long time now that he was safe. He craved a cigarette, but there was no smoking in his third-class compartment with its wooden benches, and it was far too cold to go out and stand between the cars. He could wait. He dozed and dreamed of places he had passed through in the months it had taken him to reach this country—the Polish dvaras where the spinster sisters had come to him because his fellow officers were stealing their silver. The sisters didn’t mind the loss of the silver, but the thieves were wrapping the knives and forks in paper with notations written by a former guest, the composer Richard Strauss. The sisters wanted to save the music. They even offered him a page of the music after he’d saved it, but he’d turned them down. Now he regretted it because the women were probably dead anyway. He had narrowly missed being drowned when the Reds shelled the ice across which his unit was marching. He remembered the forest hung with clocks looted by rebel soldiers, but too heavy to carry all the way home.

After a long day’s journey with stops at every country station, the train slowed as it entered a long tunnel and then pulled into Kaunas. Adamonis stepped off the train with only one bag and a briefcase, not much more than what he’d left with years earlier. As he walked along the platform toward the station he heard cries of delight and saw joyful reunions as men and women embraced and whole families charged into the arms of relatives. But he could see no sign of anyone who looked like his sister.

A young man with a long brown beard and eyeglasses came up to him in the hall.

“Michael Landa,” and he put out his hand. “We’ve heard about you. I represent the Lithuanian government, and I wonder if we could have a chat.”

Adamonis measured men quickly, as he had been taught. This one looked all right and he was alone, and that was good.

“Of course, but not just now. I’ve been away a long time and I think my sister is expecting me.”

“We’ve spoken to your sister. She’s agreed to let us take you over to her house a little later.”

“At home with her family. She’s anxious to see you, but she’s a patriot, and she understands. I hope you’re a patriot too.”

“It’s a bit too soon to tell. I just stepped off the train.”

“Then maybe you’ll become a patriot. In the meantime, your sister lives here, and helping us will help her.”

Adamonis wasn’t sure if this was an appeal or a threat. He could be outraged or he could be agreeable, and he chose the second option. He didn’t really know much about the government, but it couldn’t be anything worse than what he’d left behind.

Landa led him out of the station and down the steps to a sled where a driver was waiting for them. Adamonis wore a felt fedora and a heavy wool coat, but the coat had become worn, as he had lived in it days and many nights for over a year. He was a solid man in ordinary times, but the last year of flight had thinned him out and he felt the cold as they drove along through light snow.

The city lay in a dim pool of woodsmoke and falling snowflakes, with men walking by as quickly as they could on the silent streets. A mother with a scarf over her mouth tugged along a child bundled in a knitted hat and felt boots. He saw only three cars in all.

Kaunas had been a czarist garrison town that now, after the war, had a capital thrust upon it. Vilnius was supposed to be the capital of Lithuania, but the Poles believed it belonged to them and had seized it three months earlier. With the occupation of Vilnius, the Lithuanians licked their wounds and set up in Kaunas, calling it their “provisional capital.”

Seeing the city of his youth through the snow was like seeing it in a dream. He recognized Soboras, the massive Russian Orthodox church built for the garrison in the last century, but the low wooden houses and two-storey brick buildings seemed neither familiar nor unfamiliar, suspended between reality and memory.

Excerpted from Provisionally Yours by Antanas Sileika. Copyright © 2019 All rights reserved. Published by Biblioasis.

Michael Chabon is the new showrunner for Star Trek: Picard.

Julia Phillips on Writing a Russian Story in an American Voice 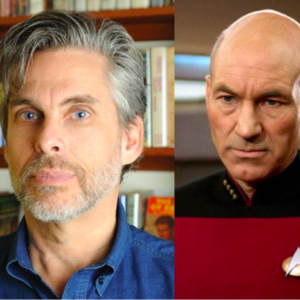