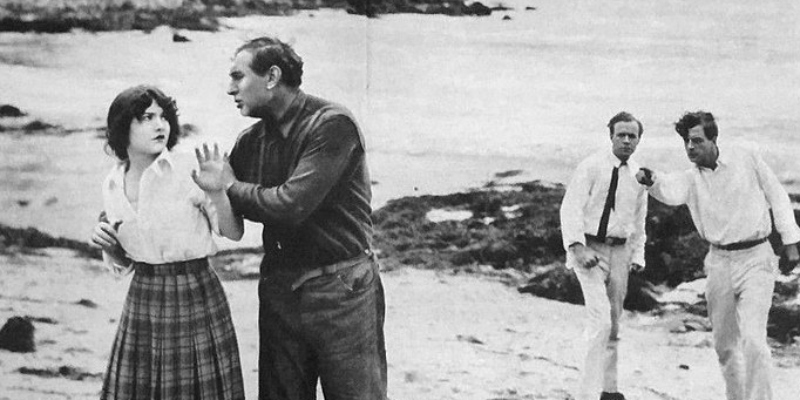 Profile of a Philanderer: What Kind of Man Becomes a Cheating Husband?

On Narcissism, Insecurity, and Other Red Flags

What if you could look into the future and know before you got married that your prospective spouse would be unfaithful one day? What if you could see it coming? Well, after talking to a lot of cheaters, I noticed that some personality traits are fairly consistent among them. If you are aware of them, you may be able avoid someone who’s more likely to break your heart down the road. For most men, cheating is like a recessive gene. The attitudes and influences that make a man feel inclined or justified to go out and break his wedding vows have already cast their spell on him before he marries.

Now, does marriage change people and make them into cheaters? I have not found that to be the case. Dead Bedroomers, who are responding to the pain of a marriage not going quite the way they want, usually had it in their mind before tying the knot that it was okay to cheat if necessary. In fact, most men who cheat entered into marriage with a permission structure in their minds that allowed them to cheat. They’ve come to a fork in the road where the relationship has gotten bumpy, or they’ve begun to dislike their midlife identity, or they’re doubting their masculinity, or they’re feeling a strong desire to be affirmed by someone new. And when they get there, they activate the justification system that was instilled long ago that allows them to put aside any guilt they might have and cross the boundary into Cheatingland.

There’s not one strict, absolute, predictable set of traits that all male cheaters share, but several studies (including mine) have demonstrated narcissism to be one of the most common and reliable predictors. Philanderers tend to have a high sense of self-regard and oversize egos. They usually consider themselves good-looking and smart and entitled to love and attention. They believe they deserve a little more from life than other men. They want to drive fast, eat gluttonously, and corral multiple women as a way of reminding themselves that they’re a cut above other guys and have the power to seduce the opposite sex. Men who think they’re good-looking, if that’s an important part of their self-image, may need to be reaffirmed and reminded of that from time to time. The older that men get and the further away they drift from being young and virile, the more affirmation they may need.

“I’ve always been known as a pretty boy,” said Zac, an actor. “In high school and college, I was always one of the guys that girls would talk about. When I started acting professionally, my looks were always talked about. It’s not that I was full of myself—I was just used to people responding to my looks. But as I got older, I noticed I was hearing less and less about my looks. I wasn’t always the cutest guy in the room, or whatever. Which made me feel like What the heck? If I didn’t have that, then who was I? I felt drawn to find women who would give me that attention and tell me one last time that I was a pretty boy, because that was a part of me that I didn’t want to let go.” Some cheaters are surprisingly insecure, and a compliment from an attractive woman, or even just attention from a woman, is a powerful currency for them.

According to Zac, “When a woman tells me I look good, I’m cute, whatever, or just gives me that look like she’s into me, that is everything. That puts a charge in my battery and a pep in my step. Okay, I still got it! I don’t even need anything to happen to get that jolt. Just knowing that she likes what she sees is enough to make me smile from ear to ear.” In some ways, the cheater is like the retired athlete who still longs to hear the crowd roar for him so that he can feel like he’s back on the playing field, soaking up that adoration. Women who respond to him are like the crowd cheering to tell him he’s still the man.

For a man to pursue women without being stymied by a fear of hurting his wife, he must be self-centered and have a low level of empathy or a very quiet conscience. Adulterers are usually impulsive, good at compartmentalizing, quick to chase self-gratification, and slow to realize the potential consequences of their actions. Most cheaters fall on one edge of the sociosexual scale, which is a way that sociologists measure how willing people are to have sex without love. People who are sociosexually restricted require commitment, intimacy, and love before sex. People who are sociosexually unrestricted are comfortable with having sex without love, and they’re open to having sex with people they don’t know that well. Most cheaters are sociosexually very unrestricted, and this is, again, a trait that’s typically developed well before marriage.

In my study, I heard cheaters talk about their wives as if they were the furniture of their lives.

In my study, I heard cheaters talk about their wives as if they were the furniture of their lives. I use that word in the sense of a fixture, a permanent piece, an important part of the home that is an extension of the self. Therefore, to them, a wife’s being the furniture of his life meant that she is an essential part of him. And so they felt free to chase other women, secure in the knowledge that their partner would never leave them even if she found out.

But for other men, seeing their wife as furniture meant that she is something so commonplace, they don’t pay attention to it anymore. Something you take for granted. They love their wives, but they tossed that love into a remote corner of their hearts a while ago, and they don’t really think about it that often. So, they sneak around without really considering what losing their wife would mean. They feel justified. They don’t feel guilty. They don’t feel like bad guys. They think they have a right to do this.

As Nathan the actor said, “I treated my wife great, never abusive, didn’t argue with her much. I was a good dad, took everyone on great vacations. I was a good dude when I was with her, but when I was away, I would stray. But, honestly, I didn’t equate getting laid on the road with being a bad person.”

A lot of men believe that cheating does not make them bad guys, because they separate home behavior and street behavior as if they’re two different realms. Jamie, who’s had a string of affairs, said, “Whoever I’m with, I take care of them. But even the best of them is not going to make me behave.” Many men feel like their role in the family is to be a provider, and if they do that and take care of everyone, they’re entitled to sleep around. “I was coming home on a Tuesday night at three in the morning smelling like Jameson whiskey and pussy and cigarettes, and feeling, like, It’s cool, ’cause, hey, I pay the bills around here,” Jamie said. “I never said that verbatim, but that was in my mind.”

In his heart, the adulterer likes having a fuss made over him.

Many cheaters love adrenaline. It’s one of the constants throughout their lives. They’re not averse to pressure, competition, and high-stakes games. As I found, many of them have jobs or serious hobbies that demand the ability to handle pressure. They tend to enjoy outsmarting people and getting away with a plan and deftly making their way through emotional minefields.

The thrill of meeting someone new, the delight of being affirmed, and the ecstasy of illicit sex—as well as the anxiety about getting caught after they return to the real world, and the frenzied effort to keep it all quiet—the entire roller-coaster rigmarole is catnip for them. These are guys who, in many cases, have a twisted sense of humor. They’re people who would find something funny in an insanely messy situation. They’re men who would have their mind overtaxed, their phone buzzing like crazy, their lungs still fatigued from yesterday’s strenuous, uh, workout, their spirit pulled in two directions, their life as madcap as a Shakespearean comedy of errors, and they wouldn’t freak out. No, they would laugh deep in their soul.

In his heart, the adulterer likes having a fuss made over him. He enjoys being the center of drama. He finds the insanity of the cheating life fun. “It’s just a rush to see if I don’t get caught,” said Christian from Miami. “I liked the danger. The way my heart pounded when I was with her made me feel alive.” These are men who love a challenge, who want adventure. They’re easily bored, and they love having an outrageous story to tell their closest friends. They are guys who like to break rules and test boundaries. People who don’t do whatever society tells them. They feel like they’re special somehow. Exempt. They feel like they can run the red light, cut the line, cheat on their taxes, and get away with it all.

They like getting over on everyone and showing themselves how slick they are because they think they’re smarter and badder than the average bear—and in many cases, they are.

To survive as a cheater, a man can’t be sloppy. He’s got to be scrupulous, circumspect, analytical, and calculating. He’s got to have a reliable memory and occasionally be able to see around corners. When he’s got a secret friend, he’s got to think about how to keep her happy without alerting anyone that there’s some outside force in his life. If he usually comes home from work tired but then suddenly starts skipping through the front door, clearly proud of himself, his wife will likely notice the shift and question it. Or if his mistress gives him grief or dumps him, he can’t go home and be in a funk. Either way, he’s got to be able to tamp down his feelings and keep them to himself.

Of course, that means he’s creating a whole intense emotional ecosystem that he’s keeping secret from his wife—excited before dates, ecstatic while alone in a room with the other woman, elated as he floats home from a night of mutual lust, or angry when there are complications. Hiding all of that will push him further away from his wife. He’s having a whole separate life and dealing with a torrent of feelings that he’s not sharing with her—and he’s already in the habit of not sharing his emotions with her. It’s harder to connect with her when he’s doing so much behind her back. 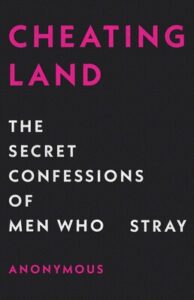 From CHEATINGLAND by Anonymous. Copyright © 2022 by Tuscon Book Project. Reprinted by permission of Atria Books, a Division of Simon & Schuster, Inc. 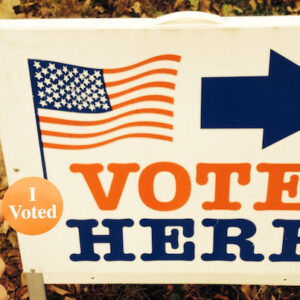 One hundred percent democracy sounds like a grade someone has achieved in a course—and we would like to believe that our American...
© LitHub
Back to top
Loading Comments...