He crossed the striped white line. And then he pirouetted; he fell on the nighttime pavement. He moved a bit; tried to get up. And then he didn’t move again at all. A Chicago police officer walked over, kicked his hand. Maybe there was a weapon in it. He died, later at the hospital from the 16 bullets in his body; just one bullet less than his age, which was 17.

Elsewhere, in a car in Minneapolis, a girlfriend cried. She was in the driver’s seat. Next to her, a white t-shirt soaked up the dying man’s blood. He groaned. A gun still pointed through the car window.

His skull was fractured in three places. His nose and both his cheekbones were smashed, leaving his face pulpy, undefined. The blow to his mouth had split open his upper lip and broken six teeth, three of which were embedded in his lower lip, hideously inverting his beautiful smile. Four of his ribs were splintered, one had pierced his left lung, which was what made him bleed from his mouth. The blood on his breath bright red. Fresh. Frothy. His lower intestine was ruptured and hemorrhaged, the blood collected in his abdominal cavity. His spine was damaged in two places, the concussion had paralyzed his right arm and resulted in a loss of control over his bladder and rectum. Both his kneecaps were shattered.

Still they brought out the handcuffs.

That last one is not captured on video. In fact, it isn’t even real. It is the climactic scene in Arundhati Roy’s 1997 novel The God of Small Things. It’s 1969 in the Indian state of Kerala. The man’s name is Velutha, and he is an untouchable. He has an affair with Ammu, a woman from a higher caste. The police brutally beat him as punishment. The punishment was not one prescribed by the law, yet it was still important. Velutha and Ammu upended their society’s caste hierarchy; they defied the social order.

Police brutality might seem like a product of a profoundly disordered society, but it is in fact the opposite.

“The conservative defends particular orders—hierarchical, often private regimes of rule—on the assumption, in part, that hierarchy is order,” writes Corey Robin in his 2011 book

Robin is writing about conservatism in the broad sense, not merely the way it is understood in American politics. For Robin, a conservative is anyone for whom the maintenance of social hierarchy is worth the price of injustice, human suffering, even death. If hierarchy is order and order is good, then the overturning of hierarchy is inherently disorderly, and inherently bad. Police brutality is a combination of warning and punishment for those at the bottom of the hierarchy. It is the ultimate maintenance of order.

When Velutha is beaten by the police, Roy describes, partially through the eyes of two children:

The sober, steady brutality, the economy of it all.

The twins were too young to know that these were only history’s henchmen. Sent to square the books and collect the dues from those who broke its laws. Impelled by feelings that were primal yet paradoxically wholly impersonal. Feelings of contempt born of inchoate, unacknowledged fear—civilization’s fear of nature, men’s fear of women, power’s fear of powerlessness.

Man’s subliminal urge to destroy what he could neither subdue nor deify.

What Esthappen and Rahel witnessed that morning, though they didn’t know it then, was a clinical demonstration in controlled conditions (this was not war after all, or genocide) of human nature’s pursuit of ascendancy. Structure. Order. Complete monopoly. It was human history, masquerading as God’s Purpose, revealing herself to an under-age audience.

There was nothing accidental about what happened that morning. Nothing incidental. It was no stray mugging or personal settling of scores. This was an era imprinting itself on those who lived in it. History in live performance. If they hurt Velutha more than they intended to, it was only because any kinship, any connection between themselves and him, any implication that if nothing else, at least biologically he was a fellow creature—had been severed long ago. They were not arresting a man, they were exorcising fear. They had no instrument to calibrate how much punishment he could take. No means of gauging how much or how permanently they had damaged him. Unlike the custom of rampaging religious mobs or conquering armies running riot, that morning in the Heart of Darkness the posse of Touchable Policemen acted with economy, not frenzy. Efficiency, not anarchy. Responsibility, not hysteria. They didn’t tear out his hair or burn him alive. They didn’t hack off his genitals and stuff them in his mouth. They didn’t rape him. Or behead him. After all they were not battling an epidemic. They were merely inoculating a community against an outbreak.

In his 1960 essay “They Can’t Turn Back,” James Baldwin writes about the underlying threat of violence that maintains the racial hierarchy in the Jim Crow South. He watches a white woman at the airport in Tallahassee greet her black chauffeur.

“She might almost, as she goes toward her chauffeur, be greeting a friend,” he writes. “If she were smiling at me that way I would expect to shake her hand. But if I should put out my hand, panic, bafflement, and horror would then overtake that face, the atmosphere would darken, and danger, even the threat of death, would immediately fill the air.”

The threat of institutional violence for Baldwin and black people like him is a social maintenance cost. It is inoculation against an outbreak.

“Conservatism… provides the most consistent and profound argument as to why the lower orders should not be allowed to exercise their independent will,” writes Robin. “Submission is their first duty, agency, the prerogative of the elite.”

It’s no wonder that Donald Trump (ripping off Richard Nixon) called for a return to “law and order” in his acceptance speech at the Republican National Convention.

Two months later, it was a sunny afternoon in Charlotte. Police cars surrounded his pickup truck. They yelled at him and he got out, wearing turquoise pants. They said he had a gun but his wife said it was a book. And then they fired three bullets: one into his wrist, one into his back and one into his abdomen. He fell onto his stomach, bleeding and losing consciousness right there on the pavement.

“He better not be dead!” his wife yelled.

Still they brought out the handcuffs. 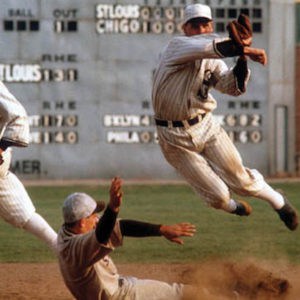 Cait Murphy's A History of American Sports in 100 Objects is a thorough compendium of the artifacts, the symbols that have...
© LitHub
Back to top