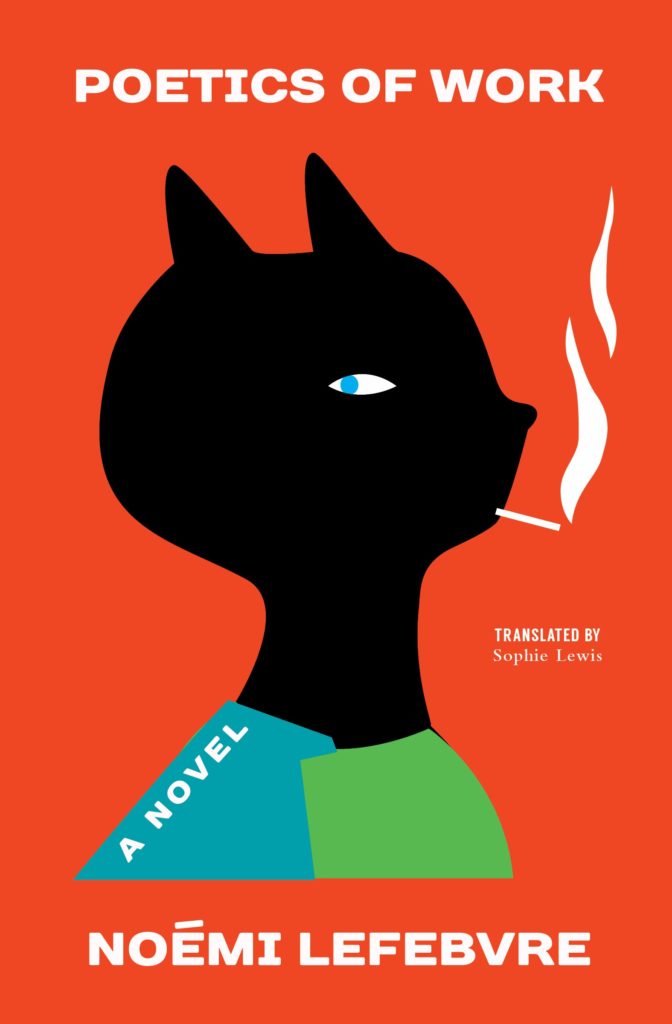 The following is excerpted from Noémi Lefebvre's novel, translated by Sophie Lewis. Lefebvre was born in 1964 and lives in Lyon. She is the author of four novels, all of which have garnered intense critical success in France, including Blue Self-Portrait and Poetics of Work, which is available in the US via Transit Books and in the UK via Les Fugitives.

For years everything that’s gone through my head has been debated in this courtroom that I call the house of the dead, where my father presides. Some people talk to God, others to their dogs; my father is my dog, my god, the magistrate who nips at my arse and straightens out my soul, who protects me from all kinds of wanderings and who keeps me from doing life. The call to order is within his remit but he’s also the king of jurisprudence, the inventor of obligations I must fulfill and prohibitions I must respect in order to become what he wishes but I don’t know what he wishes. How could I know, I never see him.

For a long time I wanted to be rid of him since he wasn’t around, but my father shines brightest by his absence. Last year I still wanted to live like other people without my father and leave my father behind by being with other people, I spent evenings in the company of people who had no connection, neither close nor remote, with this upholding of the symbolic function that historically identifies authority with the figurehead of its institution and vice versa, people then with no obligation to answer to him or be worthy of him but who could let themselves go and say anything at all, idiotic things for example, my father remarked, could spin endless observations about issues of zero interest, he preferred not to comment, while reserving his opinion, producing and reproducing a kind of tirade as naïve as it is boring, which transformed, as the hours filled with marijuana smoke, into a more or less continuous flow of sub-philosophical argumentation of a rare vacuousness, when it wasn’t simply counter-truths produced by the zeitgeist, he would listen to himself talk while also reading Marie-Claire at the dentist, L’Oréal, Givenchy, Exclusive: Blondes Take the Front Line, Fashion Week: Armani, Chanel, Sun Capital, Fashion: Balenciaga Dresses the Police, Eros of the Heroes, Society: The Poor are Poor and Rape Hurts, Pineapple Miracle Fruit, Skincare, Books: The Prizes, Psychology: Changing your Habits, Stars: Today Mercury enters the unconventional sign of Aquarius and from this point on you will find yourself well equipped to surprise others with unpredictable moods or strange ideas, no change on the emotional side but that shouldn’t, in any case, affect the direction things are taking, Cancer on the lookout for all opportunities to broaden your professional horizons with savvy! While my father was cultivating himself solo, I was holding conversations without a hint of decency or sense and unfortunately my heart wasn’t really in it, in fact I was repeating yes yesses and yeahs and now and then adding a judicious notwithstanding, I was using the present to talk about the past and the conditional for the future not keeping my tenses in agreement at all, he must have noticed my lowered lids and open mouth, lulled by the music of the three-speed dental de-scaler of a great defender of hidden charges and of some people’s right to eternally white teeth. Pleased with his enamel and with this opportunity to point out the constant disappointment which, it therefore seemed to him, however chockful his diary, without fail, I felt the need to expose him to, he had prescribed me nearly a hundred years of solitude.

Thanks to my father, I suffer from a physical inadequacy in all things social. Whoever contemplates me sees my father settled in my apartment as if in his own; he’s there in my eyes, he hunches my shoulders, slows my stride, spreads out before me his superior grasp of all living things. I’m used to it but people aren’t into it, that’s natural for people. I understand them, people; my father doesn’t understand that I understand people, he’s careful to keep reminding me of the difference between me and other people so I won’t become someone among people but always nobody among nobody. When I venture a joke or let’s say a witticism, my father ensures that the general ridicule silences me on the spot. When I’m asked an ordinary question, I go down rabbit holes of general formulae and elucidations entirely shaped in my father’s words, people listen to my father with stricken faces, then comes the dismayed silence. Sometimes I follow up with a little backtracking line, hoping to show that this isn’t me, that I’m much funnier and actually rather free-thinking at heart, and people stare at me with sympathy and change the subject, and my father guffaws so loudly that I withdraw my claim to a part in the conversation which is in any case an art and an education, anyway if I was a recognised couch case on docto-psy.com we could call this a rift between the desire to be an entirely independent social being and the inability to do so without my father. While I bring my superego back home, my soul filled with shame and anger, as my father says winding me up, I still have to hear him totting up my pathetic parties and reiterating how my friends, as I like to call them, are not friends given that I, according to him and by all accounts, am incapable of friendship, and to listen to him further explicate friendship, its definition and applications, citing the unexcelled example of Montaigne and La Boétie, and those remarkable friendships between Bouvard and Pécuchet, Laurel and Hardy, and Mole and Rat, between Marx and Engels, Calvin and Hobbes, and Mercier and Camier, not forgetting Tintin and Captain Haddock, friends go in pairs, sometimes in threes or fours à la Musketeers, and after that there’s Facebook, is that what you want, then, Facebook friends? I’m not listening to him now, I’m out of there into the shitty gales and this fucked-up autumn.

For years everything that’s gone through my head has been debated in this courtroom that I call the house of the dead, where my father presides.

Lesson one: Poets, subject no one to the authority of a father.

Paternal authority is, of all authorities, the one most inimical to poetry.

“Did someone ask your advice?” “No one.”

“Do you even know any poets? Are you acquainted with a single true poet?”

“And if, by an extraordinary piece of luck—which is of course no more than a nursery-school hypothesis—there proved to be a poet, a genuine and excellent poet, with whom you speak, why should he, this excellent poet, have any use for your advice?”

Impartiality is a Protestant quality in my father, distantly inherited from a tragic ancestor in the Hundred Years War, a comrade-in-arms to the King of Navarre and future King of France, Henri IV, all hobbyhorses pertaining to the aforementioned royal to boot. This quality of my father therefore predates the publication of the great Emmanuel Kant’s Critique of Judgement which merely disseminated my father’s impartiality to the masses, as my father’s biographers should be aware, for this philosopher whom we tend just to call Kant, whom my father calls Emmanuel and not Immanuel for all affectation is against his principles, the famous Emmanuel, then, has merely passed on the impartiality of the tragic ancestor from the Hundred Years War whose nose my father has also inherited and perhaps too his taste for longwinded storytelling. Kant invented nothing, that’s what you should know, because, however tragic, my father’s ancestor was already sitting pretty. Nonetheless Emmanuel, the happy Protestant, so my father calls him ironically or in counterpoint to the tragic author of the authors of his days, impossible to say which, Emmanuel the famous, whom we just call Kant, was certainly a dedicated pen-pusher, my father admitted, for in all his writings the happy Protestant was pushing impartiality, even though this loftily conceived virtue has not yet, alas, gained the understanding of telephone salespeople. Notwithstanding Kant full stop, my father conceded, did even so write the instruction manual to an aesthetic that we must admit is indispensable to understanding the art of detachment through contemplation. We can call that indifference.

Lesson one: Poets, subject no one to the authority of a father.

Indifference is a contemplative state, my father said one day when he’d been drinking.

Contemplation is one of my father’s talents. Once, a long time ago, my father was away on business for months we didn’t know where, he came back we don’t know why, he set down his case, ate some meat, drank, took a shower, drank more, settled down in his boxers and watched television.

Another time, I was thinking of adulthood as the state of complete physical and moral fulfilment, my father had been gone more than a year, he came back who knows why, he set down his case, ate some chips and garlic gratin tomatoes, he drank, took a bath, drank more and contemplated his computer.

Later, I was wondering if complete physical and moral fulfilment was within anybody’s grasp, my father had gone who knows why, he came back to pick up some things, he filled two bags, he ate some royal sea bream with fennel and a tiramisu, he drank, washed his hands, drank more and contemplated his mobile phone.

A year later, I was wondering if complete physical and moral fulfilment is possible only in a society that demands complete physical and moral fulfilment, my father had come back for his things, he set down his case, he drank, he contemplated my mother, said she’d better get out fast because he was back home, he drank more, ate some cod brandade, raped my mother and contemplated a book.

Not every father has to match the American dream of the paternal fiction, here’s the real thing.

The American father who comes back from the war and hugs you in his GI arms, the tears of joy at the airport, that’s not your father.

The father who’s worn your photo thin with kissing it amid desert storms, that one’s not your father.

The patriot who’ll bring you a souvenir from the country to show how much you mean to him, the guy who thinks that after years of absence he’ll draw you back in with one commercial hook, that one might be a famous GI but he’s not your father.

The father who’s proud of you when he knows nothing about your life but trusts you are a good person, remember once and for all that he is not your father.

Indifference is a contemplative state, my father said one day when he’d been drinking.

Don’t trust the American fiction, fathers who aren’t there don’t miss anyone. Now if, one fine day, this father plays the trick of the returning warrior on you and you go along with it, if the sincerity of a father hugging you tight in order to wipe the slate clean has you in tears, you’ll know you’re a hopeless poet.

Sincerity is an American fiction, said my father one day he’d been drinking.

Lesson two: Poets, don’t look for sincerity in poetry; there’s nothing in this American sentiment that’s worth saving.

Here are the finalists for the 2020 Bram Stoker Award. 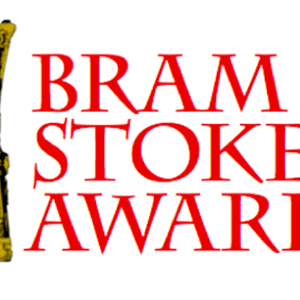 Here are the finalists for the 2020 Bram Stoker Award. Today, the Horror Writers Association—dedicated to promoting horror and dark fantasy writers—announced the finalists...
© LitHub
Back to top