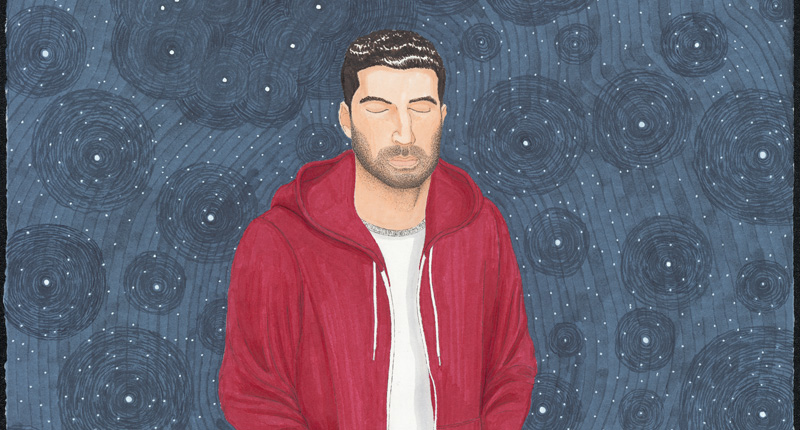 The Lowly Author on Joy, Regret, and Ghosts

A cave is a natural geologic occurrence, a dark space accessible to humans, and an allegorical space to talk about humankind. Alan Felsenthal spent six years writing his debut poetry collection Lowly, a monumental work that feels chasmic—“Sitting inside the corroded caves were friends, twins who knew nothing and could learn nothing from me now. The true light is the loneliest light there is,” he writes in the poem Like Someone Once Was.

Felsenthal has also spent most of the last decade working at The Song Cave, a press founded by his friend and fellow poet Ben Estes. Together they spend their days packing up books to ship out, some previously out of print or unpublished in the authors’ lifetimes. They edit and proofread manuscripts, set up readings, and work with artists to create art prints, all from Estes’s apartment, often orbited by a cat named Pigeon.

I met Felsenthal for dinner in Koreatown in Manhattan after finishing Lowly, out May 1st from Ugly Duckling Presse. Meeting with him to discuss the book felt a bit like eyes adjusting to daylight after seeing in the dark. We decided to spend the evening getting to know each other, and conduct his first interview for Lowly later.

Thora Siemsen: Congratulations on your debut collection. How does it feel going from publisher to published?

Alan Felsenthal: Thank you. It’s strange to send your vulnerabilities out into the world. Now there’s this sorrowful codex out there and it has my name on it. For a while, I had only identified one true goal in life—to publish a book of poems before I die. Ugly Duckling fulfilled that goal beautifully. My editors, Dan Owen and Emmalea Russo, saw in Lowly a reason to create a book, and masterfully figured out how make it look like the book I wrote. The image on the cover is very dear to me, because it was made by Ben Estes, my co-editor at The Song Cave.

TS: We talked [over dinner] about the absorption of praise and its limits, or this idea of a “joy ceiling.”

AF: I didn’t make that term up, unfortunately. There’s a poem I love by Charles North, a wonderful poet, in which someone refers to the restaurant Le Pain Quotidien as “Pain Quotient.” I thought that was so funny and, based on the audience’s response when he read the poem, others did, too.

Riffing off that, I think what I meant by a “joy ceiling” might be closer to a joy quotient. Like there’s a certain amount of joy available in the universe, and the number of things that want joy is so large that they can’t all be accommodated. Wouldn’t it be inequitable to experience extreme happiness when so many people around you are struggling to live? Looking at the world as it is, how much happiness even exists right now?

But a poem can be a wellspring for something like joy. Poems can transmutate pain and commit emotional alchemy. A poem can even instill joy by capturing sadness accurately. To see sadness rendered true in a poem and to feel that the essence of your sorrow is real, as stable as numbers, that’s a gift an inspired poet can give.

“Wouldn’t it be inequitable to experience extreme happiness when so many people around you are struggling to live?”

TS: The Mind’s Eloquent Hotel contains the line, “I can easily forget my own body, close friends in pain far away, by imagining a state of timeless rest, the twigs gathered outside the cave.” What do ideas of the cavernous evoke for you?

AF: Metaphor, namely the allegory of the cave from Plato’s Republic. That cave appears in another poem. Plato was like a muscle spasm in my ear for much of this book. Socrates was my gadfly, buzzing about the soul. He taught me to think of the world we see as only a shadow of the one we don’t, and to hope the one we don’t see is uncorrupted by this one.

There’s also the cavernous realm of Pluto, ruler of the underworld, whose home is filled with the moaning dead. Outside of allegory, I don’t think of caves as dark places. You just have to bring the light with you.

I went with my cousins once to see caves in Virginia. There were no trolls. There were calcite walls that looked like suspended waterfalls and glistened like crystals. Not only did it feel like a place that faeries could live, one of the formations was named after Titania. There was an organ of stalactites that made music out of limestone, and even a Giant’s Hall. Our world seems a lot darker than that.

TS: In Ensue you write, “Regret cures desire for immortality,” yet the book contains this palinode [a poem in which the poet retracts a view or sentiment expressed in a former poem]. How do you feel about regret now?

AF: A palinode might first appear as a cop-out. It’s the poet’s chance to reject or retract something they’ve said in an earlier poem. It’s not accidental that my palinode is the longest of the poems and appears near the end of the book.

I regret that my first reaction to the unknown is hardly ever my best. I’ve often been critical of things that I came to understand and love. One recent example was oysters. I had avoided them for most of my life and formed opinions without even trying them. My best friend told me that a taste for oysters is acquired. You study them with your mouth and it takes practice to sense their nuances. So I tried a few dozen. Now, I love them.

TS: “I only want to know enough of the Zodiac to stay away from Berlin,” you write in Past Life Palinode. I left a lover in Berlin and was wondering if you did, too?

AF: You’re a perceptive reader. To be accurate, he left me for Berlin. Did that line bring up regret for you?

TS: Not at all. It was just so specific, like the Fates were hovering above and smiling. Much of Lowly felt like that to me, mythical and intimate. Do you regret not going to Berlin?

AF: I went to Germany and it broke my heart. I imagined myself as a German child, growing up near Frankfurt, if the Nazi Holocaust hadn’t happened. I thought about my grandparents and their friends, whose early lives were filled with terror. When I was at a train station in Berlin, I felt like I was waiting with ghosts on the platform. They weren’t new stations. The whole place felt like a factory of ghosts, more like the underworld than any cave I’ve ever seen. The experience made me more aware that the past is the present, that all the events that shape a place remain in that place. Even if the memory of them escapes the people, their forms still exist.

TS: The word oracular has been attributed to your work. This seems to be the best description for a body of work that disrupts chronology, that can reference “Wi-Fi” and “the Sphinx” in the same thought. How do you think about time, the collapse of it, when you write?

AF: That was a generous word for these poems. I’m no oracle, though. In fact, I can’t tell you what the enigma of this world is even like. I see a lot of chaos in the cosmos, and I write down my observations. Sometimes what I write has to do with what I’ve read, rather than lived; but many of my reading experiences have felt more real than life itself.

I wanted these poems to exist in a timeless space, but not an ahistorical one. Like you said, time collapsed — the past, present, and future all at once. So the snail that started the universe can slowly make its way over tomorrow’s Atlantic shore. These poems don’t prioritize the present, and they sometimes pit the past against it. The poems are meant to let worlds overlap, because worlds do.

TS: Rituals of death appear throughout Lowly. There’s a queer boy singing an aria begging to be killed, there’s reference to when people used to die at home, having to make trips to the cemetery as families.

AF: A few friends and family members died during the time I wrote this book. Death had been on my mind, but its rituals took on new meanings. I went to my first open casket funeral, one of the sadder days of my life. I was a pallbearer for my cousin. When I think about her, I can remember the weight like I’m still holding the casket.

It’s interesting that you saw the boy in the aria as queer. I think he is, too. Do you think a reader who isn’t queer would think that?

TS: The thing I like best about queerness is how it’s indistinct. I like when disparate strands of influence overlap. This poem feels very classical and also makes me think of the Mitski song, “My Body’s Made of Crushed Little Stars.” What were you listening to when you wrote Lowly?

AF: The title of that Mitski song makes me want to listen to it right now. I listened to Camille Saint-Saëns’ Carnival of the Animals on repeat as I wrote certain poems. The poem “Alternate Zoo” might have been my own version of the Carnival. Ogden Nash once wrote a set of poems to accompany each movement. I wish I could give that to myself as a kid—the music and the poems. I would have loved Nash’s playfulness: “In the world of mules / there are no rules.”

Thora Siemsen is a New York–based writer. She has written for Lenny Letter, OUT, Rookie, The Rumpus, and The Creative Independent. Find more work here. 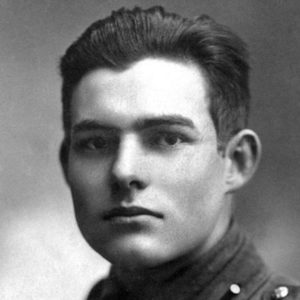 Ernest Heminway returned home to Oak Park, Illinois, in 1919, following his wounding in Italy with the Red Cross ambulance...
© LitHub
Back to top