Kiese Laymon Reports from a Room Full of Radical Christians

Like the courageous Phil Bryant, the Mississippi Governor who signed House Bill 1523 into law—a bill that might just save us from the contemporary scourge of sexual deviance across this great nation—I am a heterosexual Mississippi-born Christian male concerned about any and all things relating to my body, your body, our feelings, power, sexual history, sexual imagination and intimacy.

Like Governor Bryant, I too see young folks around the country pushing us to think and act (and overthink and overreact to) issues related to sexuality, sexual freedom and the infinitesimal ways we inflict discipline on particular American bodies. Like Governor Bryant, I am tired of people discriminating, abusing and violating the feelings of real Christian males and females. Deviant young people, many of whom claim Christianity, have organized and taken to the streets, Presidential rallies and capitol buildings to insist that Black Lives Matter, but Governor Bryant and the real Christians of Mississippi would like to ask, nearly two weeks after passing House Bill 1523, if our real Christian lives matter, where is the proof? Where is our Real Heterosexual Christian Lives Matter movement?

I’ve heard-tell of a group of radical, mostly deviant Mississippi Christians mustering the gall to organize and act up around not simply “tolerance” of these deviant lifestyles, but actual “reckonings” that target our complicity in personal, communal and institutional violence. I snuck into one of their mass meetings and I’m writing this from the back.

These fake Christians keep using the words “organized” and “moral imagination” and “sanctioning violence.” Two black women, who I assume are lesbians because they keep looking at each other, are leading the meeting. They are waxing poetic about how their conceptions of Christianity are predicated on understandings of power and how that power is routinely abused in the United States. They are arguing that it is a Christian duty to organize and fight any and all forms of structural abuse, particularly structural abuse that targets and exploits our most vulnerable folks.

I can’t listen to them any more.

I interrupt the mass meeting and say, “But men are wearing dresses. And girls are saying they’re boys. And I don’t understand when to use ‘cis’ or ‘trans’. And women are marrying women. And at those ceremonies, women are wearing pants. And ‘hes’ and ‘shes’ are going by ‘theys’. And Polly is poly. And all of this is an abuse of my religious freedom.”

When one of the organizers, who very much looks like Anita Baker, but goes by LaMont Sanford Jr., asks me how religious freedom can actually be abused, I say, “We real Christians have rights too. And you people are not granting us our American right to…” I can’t get my words right.

“Punish folks who just want to be valued and protected by the same laws that value and protect you?” another person whose gender I can’t make out, asks in crowd.

“We real Christ-loving Christians have rights too,” I say again. “And you people are not granting us our American-born right to…”

“Right,” I say, “But y’all won’t just accept it. You won’t accept that Governor Bryant has signed into law something that privileges our insecurity and punishes your bodies. And that hurts our feelings.”

I can’t tell if the looks on their faces are looks of confusion or awe. Either way, I have their attention. I tell them that my problem with HB 1523 is that it doesn’t go far enough. They gasp, roll their eyes and suck their teeth as confused radical Christians are prone to do when you tell them the truth. I tell them I’m not sure why the bill focuses on gender identity and sexuality when I’d like to see a religious freedom bill that uses all Ten Commandments as its smoking gun.

I tell them I’m not sure if “smoking gun” is the right turn of phrase but I like guns a lot and I like smoking even more (But not reefer. Never reefer.) I tell them I don’t think stores should have to serve those who lie or covet thy neighbor’s wife either.

“But everyone lies,” Anita Baker says. “And everyone feels jealous sometimes about what their neighbor has. The only people who don’t covet their neighbors’ stuff are homeless folk who have no neighbors.”

Real Christians don’t do either, I say. I also don’t think stores should have to serve folks who have killed. The Lord sayeth thou shall not kill.

“What about the military personnel who were ordered to kill?”

That’s different, I tell them.

“What about American Presidents who have ordered military personnel to kill?”

That’s different, too, I tell them. As long as the President is a real Christian, and not a Muslim on the low, the unfortunate loss of life must be contextualized and understood.

“What about governors who sign bills into law that will consequentially make maiming and murder of queer folks in Mississippi and North Carolina more likely?”

Signing bills into law that encourage the killing of people with less access to healthy choice and second chances is not killing, I say. It’s American politics. I tell them I also don’t think stores should serve folks who choose to work on the Sabbath. My Bible tells me, “Remember the Sabbath day, to keep it holy. In it you shall do no work: you, nor your son, nor your daughter, nor your male servant, nor your female servant, nor your cattle, nor your stranger who is within your gates.”

“So should stores be open on the Sunday?” a little big-headed black child I’ve seen on the Internet asks me. “Because if not, your Christian store is going to be at odds with your Christian doctrine by having its employees work when they should be at home doing Christian things like praying, and taking care of cattle that aren’t working on the Sabbath, and not mixing fabrics or eating shrimp.”

I ask the child what they are doing here on a school day.

“Minding my business,” they say. “And loving myself from the inside out, and preparing for revolution.”

They boycott. They organize. They use our abuse as proof that Mississippi and its real Christians are exceptionally abusive ignorant fucks stuck in the land time messed around and forgot twice. Time might have forgotten us three or four times. And our new bill might sanction a lot of violence against LGBTQ and gender-nonconforming kids in Mississippi. And our new bill might expose all the politicians who voted for it, and Governor Bryant, as abusive architects of bodily soulful terror. But with black poverty, black eviction rates and black incarceration rates what they are in this country, and the displacement of LGBTQ young folks what it is in this country, how can residents of any other state look at us like we created evil when they’re just as evil themselves? Why didn’t they boycott us last November when we voted down Initiative 42 that would have guaranteed every child in Mississippi access to a free and quality public education?

“Damn,” Anita Baker says to the little big-headed child. “This asshole’s bread is not all the way done, but he ain’t lying about none that. It’s like they’re picking on us.”

“Does he really have a point, though?” the little big-headed child asks. “It’s not black liberation or liberation for queer folks, is it? It’s about reckoning with abusive American power, organizing, and, ultimately, black liberation everywhere. That’s what my Christianity makes a way for. Our black liberation movement is only at odds with queer liberation in the imaginations of the imagination-less. Our black liberation necessitates queer liberation. And yes, a lot of our white queer family have watched and reaped benefits as we’ve been terrorized. But that’s on them. We will not be guided by the morality of folks who can’t see us or themselves. When I walked into stores before this bill, I was targeted and under state-sanctioned surveillance. Now, because of how I look, and who I love, and who I might want to kiss, when I walk into stores, I will be under another kind of state-sanctioned surveillance. And there are thousands of ways to kill us, and this bill gives them one thousand and one. And that hurts. It hurts so much. I do not know if we will be alright. But I know that we have work to do. Let’s do it. We have work to do. Why are we talking to this man? We do this. We got us.”

I keep on talking, and asking questions, but no one is listening to me. The entire group is hugging, dancing, crying and chanting, “We do this. We got us. We do this.” 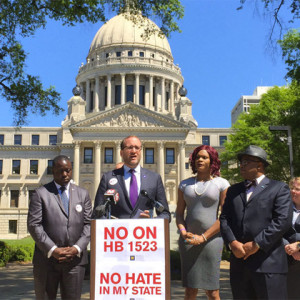 Last week, Mississippi governor Phil Bryant signed into law HB 1523, a particularly nasty piece of legislation that, under...
© LitHub
Back to top