(Because why would you want to?)

This weekend, I read about a delightful new trend in children’s literature: literary classics reimagined as picture books—or even board books, complete with fuzzy parts—so simple that even 5-year-olds can understand and enjoy their highbrow intellectual themes. Companies like KinderGuides, BabyLit, and Cozy Classics are releasing “cheerful” and “bright” and “breezy” versions of books such as On the Road and The Old Man and the Sea and War and Peace—and they’re just perfect for babies!

And more importantly: why?

There’s nothing inherently wrong with this idea, I guess, except that it’s stupid. First of all, if you’re going to take away everything that actually makes these books literature (as Alexandra Alter points out in the original Times article, the Cozy Classics version of War and Peace comes to no more or less than “Soldier-Friends-Run-Dance-Goodbye-Hug-Horse-Boom!-Hurt-Sleep-Snow-Love”) then why associate them with literature at all? Is it just a joke?

Alter quotes the creator of the BabyLit series, who argues that it’s not a joke, and that in fact books like these are “a more educational approach than just Spot the dog.” But are they really? Why would they be? A professor of mine used to tease her students with this question: if you change one word in Lolita, is it still Lolita? Yes, we’d say. What about a sentence, then? A page? A chapter? At what point does the novel’s original identity fail to have meaning? Who knows, I guess, but it’s probably before it becomes a 12-word picture book. Which is fine—except when you try to argue that picture books “based on” or “adapted from” literary classics have some greater inherent merit or intellectual value than regular picture books. In fact, I’d guess that books originally developed for children actually have more potential for stimulation, since they were purposely envisioned for a particular stage of child development.

Indeed, if parents are looking for specific literary themes, as this article suggests they are, there are countless children’s classics that address big ideas and serious concepts—”resilience” and “adventurousness,” themes mentioned in the article as being desirable, are not foreign to kids’ books—to replace any of these with these kitschy kid classics would be a shame. On the other hand, in the cases where these adaptations are thoughtful and entertaining books for kids in their own rights, there’s no real reason not to buy and read them—it just shouldn’t be because they have some literary cachet.

But that literary cachet part is what sticks in my craw. It seems to me that products like these are most charitably seen, as Alter suggests, as “the perfect gag gift for the hipster parent who has everything”—but I can’t quite bring myself to see them that way. To me they seem like a way for parents to use their own children as props, or as toys, or even as jokes themselves. Alter quotes one parent who says, “A lot of these books are melancholy or outright depressing, but it’s been cool to see how he reacts to them.” That’s about one bad espresso away from “Hey guys, my kid is reading War and Peace! Isn’t that dope? He’s going to be a famous novelist one day but for now, let’s see if he cries!” Etc.

Alter compares the demand for books like these to the demand for Baby Einstein videos—which don’t make young children smarter—and she’s probably right. They’re likely just another way for anxious parents to get conned out of their hard-earned money, because everyone knows that preying on parents wanting the best for their children always brings in a reliable buck.

Finally, I’ll just say this: no one should have to read Hemingway. It’s one thing to get him assigned in high school, when you can always lose your copy or read the Spark Notes. But reading Hemingway to babies who are trapped in their cribs, without even the language to tell you to stop, is cruel and unusual. 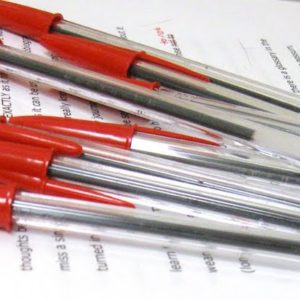 In fiction there must be a theoretical basis to the most minute details. Even a single glove must have its theory. –Prosper...
© LitHub
Back to top