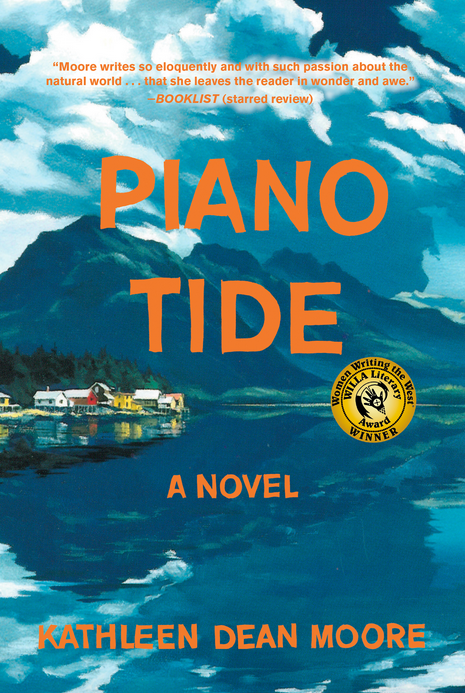 The following is from Kathleen Dean Moore’s novel, Piano Tide. A remarkably thoughtful and compelling look at the threats to endangered species and the willful destruction of the environment. Kathleen Dean Moore is best known for her books of nature-focused essays—Riverwalking: Reflections on Moving Water, winner of the 1995 Pacific Northwest Book Award; Holdfast: At Home in the Natural World, recipient of the 1999 Sigurd Olson Nature Writing Award.

Tick walked a circle around the new woman’s cargo. Somebody who knew knots had tied that tarp up—a single trucker’s hitch, no nonsense.

“Whatcha got there?” he asked. Months later, he would think about this time, knowing what he didn’t know back then—that he hadn’t asked the most important question.

From the gangway, he had thought she looked like a bird. But close up, her face looked more like a fish. Not in a bad way. But her eyes were big and sort of bulgy, and they were golden as a quillback rockfish. That caught Tick by surprise, the big gold eyes. Her face was wide, sculpin-like, and open in a nice kind of way, and when she smiled, she blinked reflexively, as if her eyes and her mouth were connected by the plate of her cheeks, as are the eyes and mouth of a cod. Youngish. Maybe thirty, maybe thirty-five, although now that Tick was forty, he thought everybody was young.

She had a dog with her, a big one, part German shepherd maybe, maybe some golden retriever. The dog strolled around on the cargo deck, sniffing the backsides of every town dog, nosing up to every kid on the deck, looking for a nuzzle or a hug. When the ferry whistle gave a warning blast to signal imminent departure, the dog galloped back to the woman, panicked as a colt. She hushed it with a hand gesture. It sat beside her, whining.

The whistle motivated the woman too. She reached over, yanked the rope’s bitter end, and pulled it off the tarp. The tarp thundered as she dragged it to the deck. Under the tarp was an upright piano.

Tick lifted off his baseball cap, smudged the blackflies on his forehead, and settled the cap more firmly on his head. “That looks like a piano,” he said. He glanced up the gangway to Lillian, who gave him a big thumbs-up. The new woman laughed, splitting her face with a grin.

“Yep. It’s a piano all right. Can you help me get it to the Green Cove cabin?”

“It takes a good high tide to move a piano,” Tick protested, even though he knew that this tide was high, a sixteen-footer, high enough to bend the sedges, flattening them in a swirl, as if a bear had wallowed there. High enough to hoist the windrow of rock-wrack another yard up the beach. High enough to launch mussel shells like double-end dories. High enough, Tick knew, to float a boat over the intertidal rocks and bring it right up to the rock ledge at the Green Cove cabin.

“Yeah, I could move a piano, if we did it now, at the peak of the tide,” he finally said. “It can be done.” Although he was still a young man, he wasn’t a man to leap to conclusions. He was capable of leaping to action if needed—if, for example, his boat was on fire. But men of the sea are wary of conclusions. “But why?” he asked. It was a reasonable question under the circumstances, but still, in retrospect, not the right one.

“Because this ferry is about to sail off to whatever godforsaken place it goes next, and I don’t want my piano to sail with it, and because I bet you’re the one who can do it.”

The ferry was in fact about to sail off to Bean Point, which was a gloomy godforsaken place in Tick’s opinion, and he knew that the people had moved out of that little D-log cabin at Green Cove. He knew of a nice granite shelf slanting up from the beach to the yard, where he had offloaded the logs for that very cabin. He could do this.

He walked across the cargo deck and returned with a four-wheel dolly. He fixed up a lever from a block of wood and a two-by-four and he pried that piano up. He put the woman on the pry bar, and he bent down to slide the dolly underneath. Tick was strong, and easy around water and big things, and before long, he and the woman were edging the piano down the gangway. Couple of turns around piano and post, and Tick had the rope slipping around a piling, and the woman was hanging on to the far end, and Tick had that piano tiptoeing down the ferry ramp like a drunk crossing a log.

A damp-headed boy ran ahead of them, shoving gearboxes and buckets out of the way. The town dogs ran along behind. Then the piano was on the dock, swaying a little. Tick gave the piano a pat and walked down the dock toward the Annie K.

Tick had two boats in the harbor—a little skiff and the Annie K, a twenty-six-foot landing craft left over from World War II. The Annie K was a bucket of a boat, and people compared it unfavorably to their own boats until they needed it, and who doesn’t need a landing craft when they have a load of lumber to move, and who doesn’t have an inconvenient load of lumber on occasion? With the flat bow that lowers on a winch, landing crafts always leak, but it was dry enough to move a piano, and that is what Tick was going to do. At least the rain had stopped. At least he had the tide on his side. He didn’t want to be dragging a load that size over wet rocks, slipping on the rock-wrack.

Casting off his lines, Tick cranked on the engine. He pointed the bow of the boat toward the wharf where the piano and the woman threw long reflections across the harbor. Everything a tide can lift was floating on the polished water. Cork net-floats, a two-by-four, a bloated rockfish— they were all bobbing round down there on the reflection of the town, boats floating upside down and right side up, kids riding down the dock in orange life jackets, reflected upside down on the water beside a floating beer can and tangled kelp.

The challenge of moving a big object by boat brings in the men, faster even than an ancient halibut laid out gasping on the dock. Seemed like every man in Good River Harbor was striding down the ramp. Every one of them started giving directions, pointing here, pointing there, bossing things, even though it didn’t look like anybody needed bossing, least of all the piano woman. She stood aside while at least three men stood there on the dock and waved the Annie K in. Tick pulled the pins that held the bow closed and engaged the winch. Chains clanked through the guides, the old hinges trumpeted, and the apron of the boat lowered like a castle gate over a moat, bridging the boat and the dock. With men giving hand signals— this way, that way, stop, go, stop—they jockeyed the piano around a tight angle and rolled it onto the Annie K ’s bow. Its sudden weight lowered the bow, and all the reflections bent and rolled. The yellow-coated men shredded into yellow lines that bounced around the breakwall.

The piano secured, the dog and gear totes loaded, the new woman aboard, Tick backed out the boat, and the Annie K headed northwest out the harbor, heading for the Green Cove cabin. As he left, he saw the kids and the men and the dogs all headed northwest too, pounding up the boardwalk, then bouncing down the ramp to the trail to the cove. Tick was going to need them, and in Good River Harbor, where men were needed, they would go.

He turned on his depth-sounder and steered wide around Green Point. No doubt the rocks were safely submerged on a tide this high, but he was a careful man with a boat and not one to be taking chances. As he tipped up his cap, his eyes rested on the woman who stood beside her piano on the foredeck. With one boot braced on the bow, she leaned forward into the wind.

That woman doesn’t look like a fish or a bird, Tick decided. She looks like George Washington crossing the Delaware. “Row, men, row, damn the ice floes.” He considered the similarity. Yep, they could be identical twins, if Washington had worn a yellow slicker, and if George Washington had a strand of dark hair stuck to his cheek by blowing rain.

He poked his head out of the wheelhouse and yelled into the weather. “I’m Tick McIver. Actually Christopher, but nobody could handle a word that big, so they called me . . . just . . . Tick. Not because I stick to things like a tick. But things stick to me. Even bad luck follows me around like a grinning . . . dog.”

His speech ended in a mutter and he bent over the wheel, his neck flushing.

“I’m Nora,” said George Washington. Tick did not speak for the rest of the trip.

“She’s turning, she’s turning. The bitch got a mind of her own. Kick that wheel.”

When the piano rolled off the boat on that grand and momentous piano tide, the assembled town cheered. When it rolled up the ramp onto the porch of the cabin, they cheered again. Then somebody figured out the piano wouldn’t fit through the front door. All the discussion and laughter then, the men measuring with the span of their hands, dogs barking at the uproar. Being practical people, the men began calculating how much trouble it would be to pry out the doorframe and chain saw a bigger opening.

But Nora just shoved the piano up under the porch roof, tight against the wall, and toweled it down, pulled a case of beer out of a tote, and threw a welcoming party for herself and her dog, whom she introduced as Chum. Standing at the piano, because she had no chair, Nora picked out a semblance of “Amazing Grace.” It was awful. She winced and grimaced and even the piano seemed to shudder. Hard to know why a person who couldn’t play the piano any better than that would haul it all the way out to the bush, but there are people who just love to carry around a guitar case, so who knows and nobody cared. They all wanted to play her piano under the hemlocks, even people who hadn’t touched a key since they were kids. Pretty much all they knew was “Chopsticks.” So the kids and the dogs danced to “Chopsticks.”

Tick put a can of beer in each pocket and headed back to the harbor, shoving the Annie K away from the beach with an oar. On a falling tide, you can’t hold a boat on shore. The tide will drop right out from under you, grounding you, and there you will sit on the mud and rocks for about ten hours, looking stupid.

How to Tell the Story of Bethlehem

How to Bake a Pie for the Holidays: Long Ago Lessons from My Mom 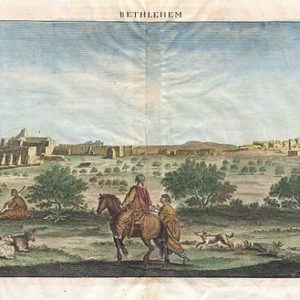 How to Tell the Story of Bethlehem When I first visited Bethlehem in December 1994, I came carrying a Christmas pudding. It seemed the ideal gift for my girlfriend’s...
© LitHub
Back to top