How to Bake a Pie for the Holidays: Long Ago Lessons from My Mom

David Howard Will Never Quite Get the Crust Right...

We stood in the kitchen, my mom and me, our hands coated in white. My dad hovered behind us, aiming his video camera. She poured a pyramid of all-purpose flour onto a wooden cutting board that she’d used for decades, then flattened it out and swished it around. “You have to use plenty of flour,” she said. “To keep your hands coated.”

She measured out more flour, plus the salt and shortening. She believed in chilled Crisco, not butter. It makes the pie flakier. She used two knives to cut it into the flour in short, quick, precise movements. I followed suit with my own dough, awkwardly, needing twice the time to fully merge the ingredients.

It was 1999, near her December birthday. When I was a kid, our house pulsated with holiday exuberance that entire month. She possessed an infectious love for the carols, the elevated sense of human connection, the rituals, the palpable high spirits. And the pies. She didn’t harbor any real culinary ambitions; most ingredients for our meals came from cans and boxes and bags of frozen vegetables. But the pies she took seriously. So much so that my dad and I had just hit on the idea to ask her to show us how to do it. And as most things that involve both art and feel, it was harder than it looks.

At nearly 59, my mom had a dense thicket of wiry brown hair going gray and an overbite that seemed to steer her face into a massive smile. She stood an imposing five-foot-ten, but there were signs of her ordeal in her pale, crepe-like skin. She looked up from the shaggy mass of dough and told us we had reached a key step: adding the cold water. Go easy, she said. A couple of tablespoons, three at most. She went by feel. Pie is about ingredients and temperatures: You keep things cold, and you keep things dry—or at least not too moist. All you want is enough to hold it all together.

Last year, I didn’t make pies during the holidays for the first time in a while. I was racing to meet a deadline for my latest book, Chasing Phil, and I rarely left my basement office. The revisions were going more slowly than I’d expected. I worked half of Christmas Eve and goaded myself into unplugging completely on Christmas Day. But I mentally drifted away as my then-12-year-old son, Vaughn, exulted over a new snowboard and Xbox games.

Writing a book is simultaneously the most rewarding and punishing thing I’ve done. A key takeaway: Don’t do it unless you feel a burning desire in your core, because while you may enjoy it at times—I did—some suffering is guaranteed. I spent all of 2016 getting up at 5 am, pounding away for four-plus hours before racing to my job as a magazine editor.

The story chronicles the global travels in 1977 of an extraordinarily talented high-finance con man with two protégés—young men who turn out to be undercover FBI agents. The reporting was exhilarating: I interviewed the now-retired agents for more than two years, and traveled around the United States excavating court testimony.

But the writing was challenging. Scenes kept shifting on the timeline after deeper research and interviews, and had to be excised and relocated, detached from connecting narrative tissue. New details kept bubbling up. I loved working it, shaping the story, but at the same time I had tightened into a fist of anxiety. I wanted to tie together the threads of the story perfectly, but I couldn’t see that taking two days off over Christmas would actually help.

Sequestered in my basement office, not quite sealed off from the sounds of my wife and son upstairs, I justified my seclusion: There’ll be more holidays. Who knows if there will be more books?

There was a kind of miracle in the way the crust slid into place.

We squeezed the damp ingredients into two balls, then refrigerated them. When we got back from a walk, my mom cut her dough in half, then rolled one out with brisk slaps of a wooden rolling pin. She worked the crust into a symmetrical circle, then used a spatula to wind it around her rolling pin in the way that groundskeepers roll up a tarp from a baseball diamond. I watched, a little awed, as she unspooled the crust across a pie plate. A seamless base layer, ready for the apples.

I watched her hands as she worked. Throughout her life she’d played guitar and piano and organ and had written songs that she self-published in two books. The breast cancer had come for her young—in her mid-thirties, as it had her mother and grandmother before that—but during a long remission, she had lunged at life with a fervor, alive to the primacy of the moment. She returned to college and earned a masters of divinity degree and became a pastor. She formed a mastectomy support group and traveled around New England speaking messages of hope.

But she was serious, too, about fun. She trained to run a five-mile road race and vacationed in the Pacific Northwest and Scotland and Northern Ireland. She joined my two brothers and me and our uncle on Maine whitewater rafting expeditions. We were a household of practical jokers. As she embarked on chemo and radiation, the doctor warned her about likely side effects. Her next appointment, she wore a gorilla suit from Halloween over her chest under her jacket. When the doctor asked how she was doing, she said, “You know, I expected to lose some hair, but I never expected this.” And opened her coat. The doctor almost dropped his chart. That night, we convulsed with laughter and plotted her next prank. But the appointments didn’t always include such giddiness, and now we were constantly silently monitoring her energy, her demeanor.

My efforts at rolling out my own crust were significantly clumsier, a nimbus of flour hanging over my ministrations. I mashed at the dough with none of her practiced elegance, spinning the board in a quest for better angles. The crust came out in a shape roughly resembling Nebraska. I unfurled it over the pie plate, leaving more rumples than a preschooler’s unmade bed. I removed it, tried again. We cracked up when, on the second pass, I nearly missed the dish entirely. She finally coached me through to a finished-enough product—a baked good that appeared to have lost a knife fight. But it went into the oven intact.

When the pies came out, hers was perfect, a gilded tint on the smooth top dome of crust. Mine still looked ramshackle, the beat-up double-wide next to the Tudor mansion. But I pumped a fist anyway, and she said, “You did it,” and gave me a little hug.

In that moment I flashed back to my childhood. I was, at times, an anxious little guy, and some nights I lay awake worrying about stuff: school, world hunger, her health. When I was really knotted up I would slip downstairs and make just enough noise to wake her up, and she would come out of her bedroom and wrap me in a drowsy hug and tell me it was all fine.

This hug was like one of those. Except that when I think back now, I realize what was different: I was comforting her.

In the scene that plays out in my mind, my mom is one of the first people to open Chasing Phil, and she eases into a comfortable chair and soaks the story in, savoring it. I tell her how I still agonize at times about certain decisions—a word choice, a prematurely clipped scene—but she will only see a compelling and monumentally enjoyable story.

The reality, though, is that she died less than a year after our pie lesson, in November 2000, after several months in the care of her family and hospice. We all helped: my dad and two brothers and their wives and her brother and my then-girlfriend (now wife), Ann, and me. Some close friends, too, all of us shuttling back and forth from her bed to the kitchen two rooms away.

Many people who visited or came to her memorial service asked to see her book. She’d written a memoir during the last year or two: her spiritual growth and cancer fight but also the pranks and laughter and travels and family and friends. She’d asked me to edit it for her, and I offered a few suggestions—more than was really necessary. It lives inside a red three-ring binder on computer paper; my dad came up with a sign-out system.

Once I asked her, did she want to explore getting it published? She shrugged. Of course that would be nice, she said, but that wasn’t the point.

Pies can still seem a puzzle, a struggle to navigate the tension between ingredients and form. Keep the ingredients cold until it’s ready for a hot oven. Cut things in firmly but handle it as little as possible. Enough moisture but not too much.

Rarely do I achieve her platonic ideal, and my own exploits with food tend toward gumbos and pestos and grilling. But my dad and I (he also took her lesson) have kept at it, making at least a few a year, and this month during the holidays, I’ll bake a couple—a cherry one for Vaughn, and whatever Ann wants.

I already know how it’ll go. I’ll fret about adding too much water, and as a result I’ll produce a crumbly mass that can barely be rolled out. Then I’ll set about mending pieces together and create a Boris Karloff of a confection, all stitches and patches. I’ll still feel a little startled when it comes out of the oven looking and tasting basically fine.

I’ll spend some time thinking about her, how she would’ve smiled knowingly as I labored, taking the exercise a little too seriously, the air smoggy with flour. She would have gazed at the finished product and turned to me and said: See? All you need to hold it all together is exactly what you have.

Now, she would say. It’s Christmas. Go have some fun.

David Howard has written for the New York Times, Men’s Journal, Outside, Travel & Leisure, and Bicycling, among other outlets. He is also the author of Lost Rights. 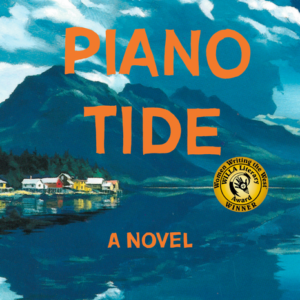 Tick walked a circle around the new woman’s cargo. Somebody who knew knots had tied that tarp up—a single trucker’s...
© LitHub
Back to top