People ask how writers get their ideas. From 8 am to 1 o’clock, I tell my interlocutor, 7 days a week, 52 weeks a year, I sit at my desk and write (at an income, if my arithmetic serves me, of 1 dollar and 82 cents an hour) but when you ask me how I get ideas, my mind is empty.

As a writer I think of myself an expert of mindfullness. Whatever I experience, whether of pleasure, anxiety, sadness, puzzlement, or the day’s nasty news will agitate to understand itself in words, and what demands expression today is the consciousness of an empty mind.

An industry of helpful articles has taught insomniacs like me how to empty the mind of what keeps us from sleeping—the task left undone, the winning argument that did not occur at the right time, the grudge left-over from high-school, the newest news. A sympathetic friend has taught me a trick to send these familiars packing: She advises me to tell myself, “You’ve already worried about that.”

But now what? I lie in my bed with my mind emptied and can’t think of anything to think. I experience the vacuum that nature is said to abhor. Count the subway riders who escape their vacancies into their iPhones; resisting the temptation to believe that in this, as in all things, ours is the worst of all possible times. I remember the best of all grandmothers playing solitaire by the hour. Who is to say how Adam and Eve passed the ur times from their getting up to their lying down? And I have a confession. At 1 o’clock, as soon as I’m done writing, I turn on the radio. Is it to hear more news or to engage the topmost layer of my mind when there is nothing much going on on the inside?

We know there are values that depend on a quality of emptiness. As a student I was attracted to the writings of the 14th Century English mystics, and I have another confession: On my New York book shelf is a volume whose inside cover discovers it to be the property of the Library of the University of London to which I failed to return it after my graduation in 1949, when I left England for the Dominican Republic. The purloined book is The Cloud of Unknowing that instructs the soul to put a Cloud of Forgetting between itself and the things of the world below, and to put between itself and what it believes itself to know about the world above, the Cloud of Unknowing. My interest was literary.

Nor do I emulate the spiritual practice of the sympathetic friend mentioned above, who has mastered the skill of sitting cross-legged, capable of long stillnesses in which I imagine her mind to be capable of fruitful emptiness.

I failed another friend, a doctor, who wished to acquire these modalities for use with his patients and asked my help in practicing his new skills. I thought it would be Interesting. Eric sat me down on a chair and told me to breathe. Okay, I’m breathing. Touch your forefinger to your forehead. Okay. When you remove your finger, you will be aware of an after-pressure. Right! Using this pressure point as the locus of your attention, be fully relaxed. Relaxed? How? Well, you might imagine yourself floating on the water or, if you prefer, on a blow-up mattress, whichever is more relaxing.

That was it, so far as I was concerned, for my imagination was henceforward fully and helplessly focused on the choice between lying on my back on a never properly or fully expanded matrass, or in the wet water a little colder always than my body-temperature.

An industry of helpful articles has taught insomniacs like me how to empty the mind of what keeps us from sleeping—the task left undone, the winning argument that did not occur at the right time.

I’m glad to know that there was a time when the young Proust, who went on to pen the longest novel known to man (Wikipedia has counted 1,267,069 words) knew the disaster of not having what it takes to be a writer. “I wept with anger”’ he wrote, “to think that I should never have any talent, that I was not gifted.”

If I want to describe my variation of this experience, which is not uncommon to the rest of us and belongs to those human events of which we tell one another that we remember exactly where we were standing and what we were doing, it will take the numerous pages, and however many commas and semicolons it takes to accommodate the collateral thinking and incidental ideas of a Proustian sentence to recount the moment of my thinking that I was twenty years old already and buried, as far as one could foresee, in Ciudad Trujillo, where nothing was happening, and my moment of radical knowing that I was not gifted with the talent to invent the disasters or desires that could translate into a novel coincided with my walking out the back door of the residential hotel I was staying in, and stopping outside the open doors of the garage inside which I was startled, was curious to see a man open his car and lift out a woman whose face and features, in the gloaming, and at that distance I strained and failed to make out, trying at the same time to seem not to have noticed what I intuited the man in the garage was wanting me to not have seen—the body in his arms, of his paralyzed wife.

It was some ten years later, at a party following a New School Creative Writing workshop, that someone asked me how I had come to America, and I told the familiar events of my thirteen year migration, managing to leave Hitler’s Nazi Vienna for England in December 1938, and arriving, via the three years in Dominican Republic, in New York in May 1951. My refugee stories were so integral to me—and hadn’t they been on the news and in the movies?—I think I could not imagine their not being known, being old news to everybody. I felt the particular silence of the air in the room in which I was telling my story, and people were listening, to what was to become the novel I called Other People’s Houses.

You asked me, I said to my interlocutor, how writers get their ideas. I am giving you a demonstration: It has taken me till today to write about my despair that I was never going to know anything to write about, and seeing a man not wanting me to see his wife’s broken body, in Ciudad Trujillo in 1950.

What interests me today is remembering a small shame for my prurient excitation mixed with pity that humans bring to accidents and disasters, and the idea of containing the experience in one Proust-long sentence.

Lore Segal is a novelist, translator, teacher, and author of children's books, currently living in New York City. Her book, Shakespeare's Kitchen, was a finalist for the Pulitzer Prize in 2008. Her most recent book is The Journal I Did Not Keep. 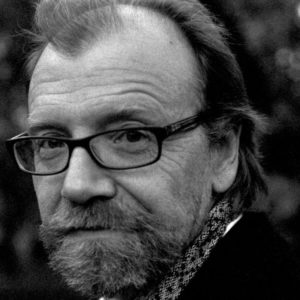 George Saunders is the guest. His new book, A Swim in a Pond in the Rain, is available from Random House. From the episode: Brad...
© LitHub
Back to top