Charles Finch Remembers the Early, Uncertain Days of the Pandemic

There’s an emotional chill in the streets today for the first time. People are suddenly thinking and planning, which are not always part of the normal duties of life. You can see it in their expressions. Coronavirus has been a story for a month or so, but only in the last ten days has it seemed like an immediate problem, and not until today did it seem much more alarming than the various deadly flus that have been arriving here by bird and swine (is swine just pigs?) since my childhood.

It now seems inevitable that in certain places where the virus is spreading, people will have to quarantine for a week or two. I tell my mom I think it will be okay. That doesn’t completely reflect what my friend Nathan, a doctor in New York, has been saying, but it at least sort of does. The best news of the past few days was his confirmation that the virus doesn’t seem to affect children, really the first thing you would wish for in a pandemic. But nearly everything else is an educated guess. We still don’t know how you get it. According to Rush Limbaugh, it’s “like the common cold” and “all of this panic is just not warranted,” so presumably we’re fucked.

However serious it ends up, the virus is already politicized. A reporter asks GOP senator Jim Inhofe of Oklahoma, who’s a sprightly 85, what precautions he’s taking about this illness, which is reportedly particularly deadly for the old, and he replies “Want to shake hands?”

I drove just to take a drive today. No traffic anywhere. In Los Angeles.

A consensus is firming up hour by hour, and it seems more likely that we will all have to lock in for a few weeks to slow the spread of this new virus, not just people with symptoms. On the first of the month it would have been an unthinkable suggestion. But the directives to work remotely are cascading down—people guiltily excited for a week or two at home—and in big cities, stores and restaurants are closed, with cheerful signs in their windows that they’ll reopen as soon as it’s safe. For better or worse, retail gives our world its texture. When it’s gone you feel it.

Most museums around the world closed today too, and this evening, in the actual midst of games I think, the NBA suspended its season, which was maybe the biggest jolt yet. It came after the 7′1′′ Rudy Gobert (who made the not especially well-received covid joke of touching every microphone at a press conference a couple days ago) tested positive. Tom Hanks has also tested positive, and there’s an online feeling of dread on his behalf.

Since Trump won, we’ve congratulated ourselves on our luck that he hasn’t had to face a crisis. This is how bad he is with things going okay! people would say and chuckle. Well, here we go. So far he’s lurching around in search of an alibi, his focus mostly on minimizing the threat of the virus, for what seems like a strange emotional tangle of personal and political reasons. Almost every day he says some variation of the phrase “It will go away,” which is how children think about bad stuff, down to refusing to say the bad word out loud. But it’s worked on us, to some degree—we were asleep. In part that’s probably because even in the most liberal mind, if you could strip every veneer of politeness away, there was a sense that the virus was happening in China, where stuff sort of always seems to be happening. Their economy is expanding so quickly that we’ve learned it fires off these kinds of externalities at random, besides which they have egregiously limited freedom of the press, so news about the virus has often seemed uncertain.

“Will we see canned peas again?” That’s a terrifying question to ask your friends even 80 percent in jest. And people are terrified. That’s the main thing. Everyone seems so scared.

But now “the whole of Italy is closed,” as a headline making its way around Twitter from the Corriere della Sera says, and no one sensible thinks coronavirus is a regional problem anymore. The Italian lockdowns are the most severe restriction on movement in a western democracy since World War II, apparently. (Anyway, as Nathan said, if we’re comparing countries, by the time China was at this stage of their outbreak—20 deaths—they had already built two new hospitals. We can’t even test people yet.) On the news from Italy, the number has suddenly shot up: as many as 20,000 people may die in America, a number so big it’s laced with a certain grim comedy for those of us who can reach deep into the mists of autocrat time, six days ago, and remember when Trump refused to let a few hundred people get off the cruise ship Grand Princess. “I don’t need to have the numbers double because of one ship that wasn’t our fault,” as he said.

There are long sections of shelving at the grocery store that are empty; enough sauerkraut and maraschino cherries left to feed an army on the march, but no milk, no bread, no meat, and only the most homely non-perishable items (I pass a lone can that says Unsalted Asparagus Spears, in glum resignation to its contents). If you’ve spent your life wandering like a docile cow through supermarket aisles stocked with an array of food that would humble an ancient emperor, it’s not a good feeling. “Will we see canned peas again?” That’s a terrifying question to ask your friends even 80 percent in jest. And people are terrified. That’s the main thing. Everyone seems so scared.

I think I was naively sure that something would judder into motion in our creaky old government—some lifelong bureaucrat on the fifth floor of an overflow office in Alexandria would get an unusual fax from a colleague at the CDC about the numbers in Wuhan, the city in China where this new, fifth strain of coronavirus seems to have originated, and at that moment a long chain of rote superpower stuff would develop, labs unmothballed, production lines whipping into life. America is such an enormous enterprise that up until this moment it’s still seemed that even if our government has been starved down to its bones by Republicans and big business (except the military, of course, grotesquely fattened up by profiteers) it would have some reflexive memory of capability lurking in it, which would be triggered and creak meaningfully forward while the meaningless theater of Trump played out overhead. Maybe it will still happen.

Locked in. The shelf-stable foods I ordered last week have started to arrive, today lentils and oats. I contemplate them and feel like a farmer in the Baltics receiving state rations.

Sarah Palin has been revealed as Bear Mask on The Masked Singer. 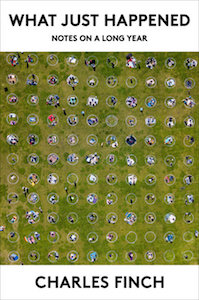 Excerpted from WHAT JUST HAPPENED by Charles Finch. Copyright © 2021 by Charles Finch. Excerpted by permission of Alfred A. Knopf, a division of Penguin Random House LLC. All rights reserved. No part of this excerpt may be reproduced or reprinted without permission in writing from the publisher.

Charles Finch is a book critic and essayist as well as the author of fifteen novels. He is a regular contributor to The New York Times and the Chicago Tribune, and the recipient of the 2017 Nona Balakian Citation for Excellence in Reviewing from the National Book Critics Circle. He lives in Los Angeles. 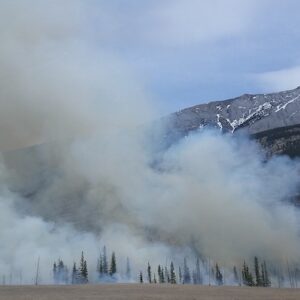 Pancho and I walked in silence along a muddy road, through a ghost town, in the Honduran rainforest. “I built that...
© LitHub
Back to top
Loading Comments...